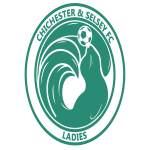 Palace Ladies continued their strong start to the season on Sunday, returning from League newcomers Chichester City, with the three points after a 4-2 win.

The match, played in stifling heat and required The Eagles to adapt to a different type of game to that encountered against QPR the week before; culminating in the Eagles ending the game with nine players following a whole host of injuries during the game.

Palace, without the influential Leesa Haydock and Pammy McRoberts & Ciara Sherwood had returned only hours before from international duty, started the game on the front foot. They were unable to capitalise initially but appeared to grow in stature as the half progressed. The momentum paid dividends through two first half goals – one from Sherwood who fired home from 12 yards on the half volley and one from the in-form Nikita Whinnet who slotted home following good work from strike partner Gemma Bryan.

Bryan, herself, went close a couple of times, denied by the keeper and having a shout for a penalty denied, when through on goal. The half concluded with the hosts in the ascendency, refusing to be over-run and Palace appearing to take their foot off the gas and become, at times, somewhat frustrated.

The home side were rewarded for their pressure before the break through a good headed goal from Wilson-Blakely following a break down the left. This was, no more than the hosts deserved as they went into the break 2-1 behind.

Palace emerged for the second period looking sharper and more effective in possession. This was rewarded in short time, when Sherwood fired home after a scramble in the Chichester box that saw Rosie Paye and Ellie Bailes go close. Again, the hosts were not to be easily disheartened and they remained a test for Palace in a period that saw a number of injuries for the visitors, including Paye (leg), Sherwood (foot), ‘keeper Megen Lynch (with a nasty blow to the face) and McRoberts (knee). However, before these knocks really took their toll, Palace added a fourth through leading scorer, Bryan, following strong work from substitute Ellie Stenning.

The final ten minutes were a real test for Palace as the injury woes mounted up and they found themselves down to nine players, working tirelessly to repel the inevitable Chichester onslaught. This included a fine stop on the line from covering defender Hannah Samuels. The Eagles showed resilience, tenacity and experience during this spell,that did eventually culminate in a further goal for the hosts from Gemma Simmonds, scoring with the final touch of an exhausting game.

Palace Coach, Kirk Stoneham commented after the game “That was a really tough shift today. It was very hot and at times intense in terms of the pace and physicality. It was pleasing to see the players deal with that side of things. Although it didn't lend itself to fluid football. However, as we said to the girls during and after the game – these are the occasions that we slipped from winning positions last season – so to see it through, successfully, was pleasing.

”Palace Captain, Freya Holdaway added, “The game was tough today. Chichester showed real determination and that they are very much a part of this league. We had to react to what we faced and the girls showed their dedication and desire for the cause, even when up against the odds. This included a steep learning curve for two of our young players, Hannah Samuels and Lydia Huntly who came on from the bench and did very well. The team spirit is clear to see and something that we know, like today, will see us through many challenges this season.”

Palace Ladies are at home, next Sunday, as they host Brislington Ladies in The FAWPL League Cup. The game, at Bromley FC, kicks off at 2pm.