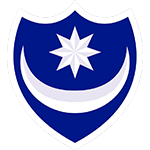 Palace Ladies put in a polished performance at Portsmouth on Sunday, securing three more points in the season run-in, through an emphatic 4-0 win.

However, the headlines were stolen by sharp-shooter, Gemma Bryan as she secured her 100th goal for The Eagles, in less than three seasons.

Any doubts as to when the100th goal for Bryan would happen were soon quashed, when direct from kick-off, with only twenty seconds on the clock, Bryan pressed high and stole the ball from an advanced defence, 25 yards from goal, drew the ‘keeper and slotted home, into the far right corner.

Bryan was clearly elated with reaching the landmark, celebrated by travelling fans who unfurled a typically Palace banner in celebration of the Gemma’s 100 in just 69 matches.

Palace continued to dictate play and despite a ten minute spell from the hosts, that saw the Palace midfield and defence called into action, The south Londoners were in complete control.

The Palace pressure paid off in the 25th minute, following a Pam McRoberts corner that the hosts failed to clear. The ball was kept alive by Bryan who lifted the ball back into the box, where the industrious Ellie Bailes rose highest to head home.

Palace were now comfortable and managed the game well, with neat possession and stretching Portsmouth’s back line. The game was, effectively decided In the 38th minute following an exquisite through-ball from Lilli Maple found the dangerous Bryan who rounded the keeper who could only bring the forward down; conceding a penalty. Bryan dusted herself down and unleashed the perfect penalty, sending Palace in, three up at the break.

Palace entered the second half, with a view to working Portsmouth, through extended possession and game management. The hosts, to their credit started brightly and carved out a couple of opportunities, although never really tested the ever-present Megen Lynch in the Palace goal. With twenty minutes to go, and the pitch conditions taking their toll on a number of players, it was the buoyant Bryan who picked the ball up mid-way into the Portsmouth half, drove at the defender and fired the ball inside the near post through the hands of the home 'keeper; completing another hat-trick and the Palace scoring for the day. The introduction of Ciara Sherwood, Ellie Stenning & Jade Davenport brought in the fresh legs needed to see the game out for Palace, who with four games left maintain the pressure on the title favourites Charlton.

“We are very satisfied with the way we handled ourselves today. The players’ preparation was spot on and I can only thank the coaches for that. We looked really strong today, we looked big physically and the game management from the players was fantastic. Whilst the headlines will rightly go to Gemma, that's our 14th clean sheet of the season; something that the whole team is very proud of. It wasn't always a game where it was free flowing and all Palace; it was a hard working performance where we broke Portsmouth down and it enabled us to create chances and be clinical in front of goal.”

Davenport added, “Credit should go to (Pompey boss) Jay and his team. They play some neat possession football at times and are very hard working, looking to play and win games, and that's a testament to the way Jay sets his team up."

Lastly it's a fantastic moment and a massive milestone for Gemma hitting her 102nd goal for the club and captain, Freya Holdaway added,

“Obviously the highlight of today's game was Gemma's incredible achievement. 100 goals is outstanding and credit to her for her hard work. That said, Gemma knows the value of those around her and spoke to us all after the game, emotionally thanking all of her team mates.

"The girls played some really good football on a tough surface today and it just proves that we are a footballing team regardless of the pitch. Portsmouth had some good possession but we've worked on defensive shape this season and it's proven a massive strength of ours. We had some great patterns of play and looked dangerous going forward. Overall the girls put in a solid performance today. Looking very positive for next week and the rest of the season.”

Palace travel to Coventry United next Sunday on the next of their consecutive tough away ties.