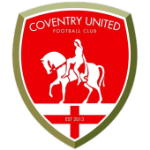 Palace Ladies extended their unbeaten start to the season to five games after their 0-0 draw against Coventry City. The Eagles had the better chances to take maximum points in their latest home match but were unable to find a way past the resolute United defending.

The visitors set the pace early on but it was Palace who had the first goal scoring opportunity of the afternoon. Bryan with a perfect pass over the United defence with Nikita Whinnett chipping over the United keeper, frustratingly seeing her effort cleared off the line. Stef Simmonds showed once again how effective she is down the left side setting up chances with threatning crosses from that side of play. Ria Collins and Rosie Paye both going close with headed chances.  At the other end the Palace backline of Lynch, Collins, Paye, Samuels and Holdaway held the line well, limiting the opponents chances.

The second half was once again closely contested like the opening forty five with chances falling to both sides and good saves from Palace’s keeper Lynch keeping the score on level terms.

As the clock ticked down in the closing stages the midfield of McRoberts, Simmonds and Haydock looked particularly impressive as they created chances for the forward line but on this occasion the home side were not able to break the deadlock.

Megan Goss was brought on with time running out to make her first appearance of the season and despite the late pressure from the Eagles, United held strong to deny Palace victory at Hayes Lane.

Dean Davenport's side now sit second in the table behind Charlton who were victorious against QPR.

The Eagles now prepare for their next game as they travel to Sussex side, Lewes, on Wednesday night for the first evening game of the season.