Crystal Palace's victorious Under-15s side will play Sunderland in the national final of the Floodlit Cup – keep up to date with all the latest from the club's young sides in our latest Academy round-up below!

Name on the trophy

What a week it was for Palace’s Under-15s side, who lived out many a childhood dream when they took to the field at Selhurst Park to face Watford in the regional Floodlit Cup final.

Their minds weren’t on the stage, however; focus was on the trophy itself. After a tense opening to the second-half, Palace went ahead from 12-yards and held on through five dramatic minutes of injury time. 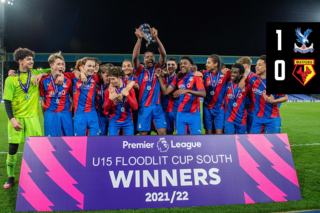 The final whistle sparked jubilation among the squad, who lifted the trophy in front of friends and family – but their journey doesn’t end there.

The Under-15s have now qualified for the national final on Friday, 6th May, where they will take on Sunderland at a neutral venue.

If they go on to win the national final, they will replicate the achievements of the 2019 side which included Tayo Adaramola, Jack Wells-Morrison and Victor Akinwale among others.

It wasn’t to be at Wembley for the senior side, as their remarkable FA Cup journey ended in the semi-finals at the hands of Chelsea

The day was a memorable one for the Under-18s side, who sat behind the dugout as guests of the first-team squad, and witnessed Academy graduates Tyrick Mitchell and Wilfried Zaha representing the club at one of the most famous arenas in world football.

Ademola Ola-Adebomi knows where the goal is, and having scored 14 times in 22 appearances for the Under-18s this season he has become one of Rob Quinn’s most relied upon starters.

After joining the club at just eight-years-old, his form this season has seen him rewarded with a professional contract.

“To get a professional contract here means the world to me,” he said after signing. “This season has been my best season so far… Hopefully we can go on and win the title.”

In early April, 14 schools in south London came together for a football tournament at the Academy to help raise funds for a new youth centre named after Zaian Aimable-Lina, who was stabbed to death in Croydon in December last year.

Zaian was one of 30 young people across the city, five of whom in Croydon, to lost their life through knife crime last year.

The tournament, hosted by Palace for Life coaches at the Academy, saw 21 teams from 14 schools, including Zaian’s friends and classmates, join together to remember Zaian and raise awareness of the Oasis Shirley Park’s goal to create a youth centre in his name.

The campaign is now in its fifth year and celebrates the contribution players from a refugee background make to the game as well as highlighting the role football can play in bringing people together to create more welcoming communities for refugees.

“It’s heartening to see clubs like Palace using football as a powerful force for good, bringing people together and a providing a sense of belonging,” said Naomi Westland, Head of Football Welcomes at Amnesty International UK.

The title race is not yet over for Crystal Palace’s Under-18s, and while they need results elsewhere to go in their favour, they will continue to fight until the final game of the season.

Next up are Reading, who travel to south London on Saturday, 23rd April (11:00 BST) – you can see exactly how the boys get on with the match broadcast LIVE on Palace TV+!

On Monday, 25th April (19:00 BST), the Under-23s travel north to Blackburn Rovers, where they will look to bounce back from defeat at Leeds United last time out.