“Sorry, one second.” Distantly, David Woozley then beckons someone back.

"Sorry about that; I am out walking my dogs and was just calling one of them back over. He’s called Wilf, actually! After the great man himself because he is so fast.”

It is at that moment you realise you are talking to a Crystal Palace fan who has lived the dream all Eagles wish for: pulling on the red and blue for the pride of south London.

Woozley “doesn’t do all of that” social media, so our former defender was a hard man to get hold of. However, with the help of fellow former Palace player, Jimmy Hibburt – the pair remain great friends two decades on from their time at Palace – the now-39-year-old was more than happy to pick up the phone to the club.

Woozley’s enjoyment at recalling his early years at Palace is still so full of passion that you’d be forgiven for thinking they were more recent than over 20 years ago.

“We had a really good youth team; we obviously got to the Youth Cup final with Hayden [Mullins] and Clinton [Morrison]. At youth level, Jimmy Hibburt was captain of the England Schoolboys at Under-15 and he was the outstanding player. But for whatever reason, injuries or just growing up, it never panned out.”

Football is littered with stories such as Hibburt’s - Gwyenth Paltrow’s 1998 film Sliding Doors is a perfect example of the fine margins and moments that footballers unknowingly contend with. And Woozley is under no impressions that had he ‘missed the elevator’ at another time in Palace’s history he might never have got to live out his dream of being a Palace player:

“My whole career I wanted to play for Palace, and in terms of how I did I was quite fortunate due to the club’s circumstances rather than that I was a really good player who forced his way into the first-team.

“My debut came about because Saša Ćurčić and Gordan Petrić had gone on strike over Nato airstrikes in Yugoslavia. Gordan Petrić at the back was superb, and it was only the day before the game they went on strike, so that’s when I found out I was playing. Steve Coppell threw me right in the deep end alongside Craig Moore. Moore was fantastic, a real classy player from Rangers who guided me through the game.”

Players going on strike, regular managerial changes and the club entering administration, the circumstances around being a footballer at Palace during the late '90s were some of the toughest they’ve been. However, off the field woes weren’t, thankfully, hindering on the field performances:

“I was 19 and just delighted to play for the team I dreamed of playing for, so the administration proceedings didn’t really affect me. I was just a young player still living at home with his mum, who was never on massive money and just wanted to step out at Selhurst Park.

“We had some sensible heads in the dressing room, the likes of Andy Linighan and Dean Austin, and they held the squad together. It built a real sense of unity amongst the players and I suppose we turned that bad situation into a good situation. We always thought we’d come out of it in the end - there was a never a sombre mood.

“I remember a game where we played away at Carrow Road with practically a youth team out and we won 2-1. And there was also the season that we played Sunderland, it was the year they got 99 points and went up, and they had Niall Quinn and Kevin Phillips. We played them at Selhurst and drew 1-1 but it was fantastic because they were just so good.” 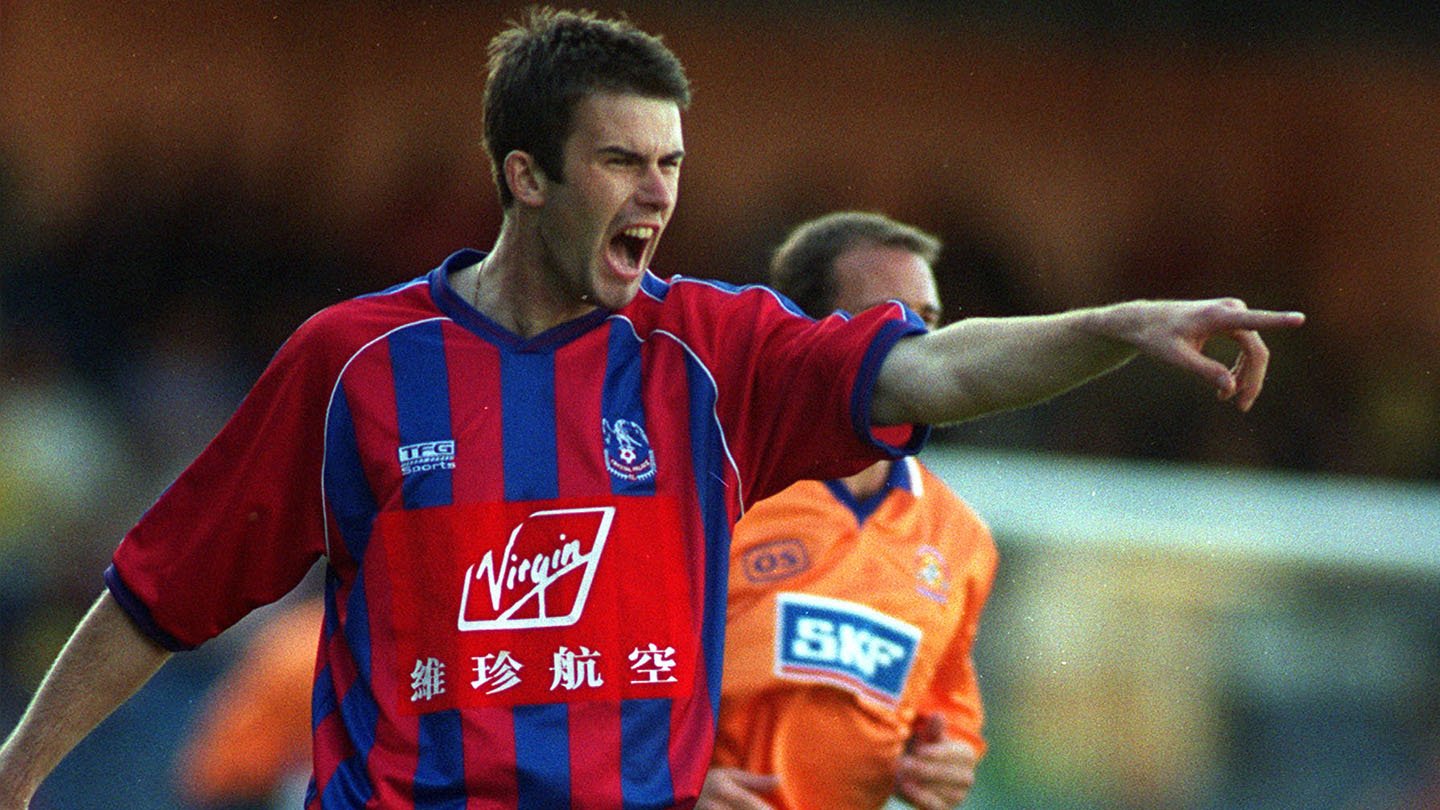 From Steve Coppell (twice) to leaving halfway through Trevor Francis’ tenure, Palace had 10 different managers in charge during Woozley’s time at the club. Of course, the now-39-year-old’s direct relationship with each individual differs depending on whether he was injured or out on loan, however, constant change has never been something easy to deal with.

“On the managerial changes, it is a different experience as a young player compared to being a senior player. When you’re in the younger group you tend to just go with it, however we were lucky that right from Under-10s we always had a steady influence in Steve Kember and he was a constant throughout my whole Palace career; he is just such a fantastic bloke.

“A lot of managers came in and had their different styles; I tended to find that the players who were recently current players were a bit more personable – I certainly remember Steve Bruce being like that. Still as a young lad, it was cool to be mixing with Terry Venables and Trevor Francis.”

During his time with the Palace first-team, Woozley played with some of the club’s most memorable names from the last couple of decades. In fact, the defender’s former teammates include the first Chinese players to play in the English Football League: Fan Zhiyi and Sun Jihai.

“We went and toured in China for two seasons running and that was like Fan was the ‘Chinese Gazza’ – I remember there was a bit of traffic so fans came running over to the bus. Police were trying to get them away to let cars through and it was chaos.

“It was interesting to see all this when I knew both of the guys were so humble and then you see their celebrity status back home.”

Unprompted, the list of players to make an impact on Woozley during his time at the club then comes to the forefront of his mind: “When Attilo Lombardo came over he was just this icon and he was so professional. It was incredible. When he turned up at Mitcham and had one of the sausage rolls made by the cooks, Bet and Kim Prentice, he must’ve thought: ‘What is going on here?’ He came over with another lad, Michele Padovano, from Juventus. And the difference in professionalism was just sensational.”

Throughout the catch-up with Woozley, it is easy to forget you’re talking to a former Palace pro, such is his fan-like excitement when discussing the appreciation in which Ashley Cole, ultimately, took his spot in the team:

“He sort of done me out of place! We were playing three at the back and I tended to go at left centre-half - I’d fill in at left-back if we went for four at the back. But then Ashley came.

“The thing that stuck out for me was his athleticism compared to other people was on another level, the same for his sharpness. I just remember him coming in at 17 and just tearing up and down that Selhurst Park line with no fear.”

AWB reminds me heavily of when we we had an 18 year old Ashley Cole on loan. We seem to have found an absolute gem again in our academy. #cpfc

No one wants their dreams to end, but for so many people their dreams don’t even begin, so Woozley always had a grounded appreciation of his ‘job’ and knew it couldn’t last forever:

“I look back in hindsight now, and I appreciate the situation. However, at the time [of being released by the club] it was obviously disappointing because I loved playing. But at the same time, I appreciated that the club was coming out of administration, was progressing and just naturally getting better players than me.

“What can you say? There’s a line between having youth with potential and having senior players who can ‘do it’.

“I went to Bournemouth to keep playing games and ended up only doing a month there because Alan Smith did bring me back; he said I’d go back and be involved in the squad, however, I broke my leg in my first game back with the Reserves.

“My time ended naturally; I know I said I broke my leg but that is certainly not a sob story because I came back and played again, it wasn’t the reason I didn’t really get back in again. Ultimately Palace moved on and I wasn’t of the level required anymore.

“After a couple of different stints at clubs, I ended up at Crawley Town and became player-manager. However, at the same time I started thinking about what I was going to do after football, so I applied for the fire service. Because when you’ve come straight out of school to football, I had no other qualifications, so there aren’t too many jobs you can go into. It is difficult to get accepted into the fire service so when I did, I made the decision on the career change despite having a year and a bit left on my deal with Crawley.”

Woozley’s time with Palace may not have reached the heights of Premier League appearances, and his time as a footballer may have ended somewhat prematurely due to selflessly putting his family and their long-term future ahead of kicking a ball. However, that doesn’t mean that the defender’s time with the club is merely a footnote in the administration years.

Woozley ends with the following story; a story that will make any of us smile: “My son came up one week to Selhurst Park as we have a friend who had a box, so my son got to go into hospitality for the Manchester City game and then got to meet Pep Guardiola and Raheem Sterling.

“Whilst they were waiting at the side of the pitch, my son asked Clinton Morrison: “Do you know my dad, David Woozley?” and Clinton replied: “Oh yeah, Big Wooza!” so that was nice for my son. He knows I obviously played for Palace, but to meet someone who played with me was cool.”

David Woozley: the fan who lived the fantasy. And loved every single second of it.