Catching up with Guaita in COVID-19 lockdown

The game’s on a knife-edge and Vicente Guaita sprawls to his right to get his hands to the ball flying towards him. It’s not Liverpool’s Mohamed Salah he’s denied and it’s not Jordan Ayew in training.

This time, VG’s impeccable positioning and reliable reach frustrate the left-footed strike of his nine-year-old son. Not defending a Premier League net, he’s defending the paintwork and furniture of his south London home - and, as you’d expect, letting nothing past him.

My coach wants me to be ready💪for the return. He won't let me rest for a second ..🧤❤️💙🦅 #CPFCFamily #CPFC pic.twitter.com/A1QT3A4JkQ

Few would have been able to predict the season Vicente Guaita is having. Nine clean sheets on the board - more than any other Spanish goalkeeper in Premier League – and just 28 goals conceded. No one, however, could have predicted that come April, he’d be forced to trade Palace’s Training Ground for his own front room and the shots of Premier League opposition for first-time volleys from his kids. Unflappable as ever, Guaita remains upbeat:

“Training and exercising with my kids has really helped me mentally,” he reveals. “It’s helped them mentally, too, which is important. Maybe saving a shot from my son isn’t quite the same as saving a shot from Wilfried Zaha, Andros [Townsend] or Luka [Milivojević], or any other teammate in training, but it definitely helps. To always be thinking about preparation, both physical and psychological - that’s a really good thing.”

Like many of us, Vicente has been doing his best to adapt to a new life working from home: “Everything’s going well. We’re at home, we’re healthy, we’re looking after each other and leaving the house as little as possible.”

But just like any football-lover, he can’t quite find an adequate replacement for the real thing:

“Of course, the club has been sending us work to do, but football isn’t about training in one room,” he explains. “You can keep fit, but football demands on-field work, building speed and working on a lot of different things that go beyond being inside. 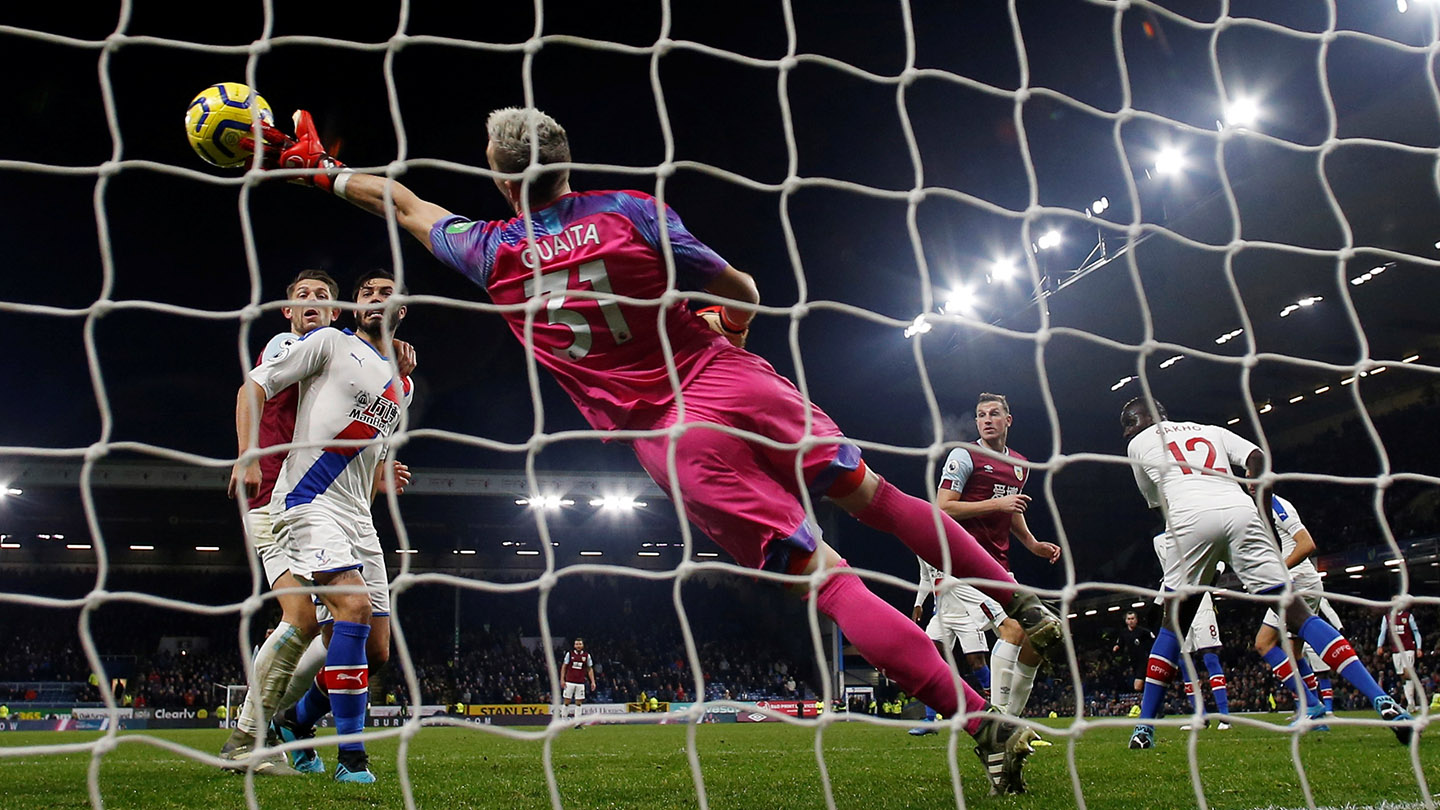 “We’ll see how things go in the next few weeks, then see if we can start doing our jobs again. I’m really looking forward to being able to get back to training, back to competing and back to finding some sort of normality, really.”

Pre-lockdown, that “normality” was something Guaita had been able to equate with applauding the Palace faithful after another 90 minutes without conceding. The Spaniard had racked up back-to-back-to-back clean sheets before football was drawn to a halt. However, the ‘keeper’s next clean sheet could come in very different conditions.

“I think it’s important above all because we have to think about people’s safety. Ultimately, we don’t know who could have the virus and we obviously can’t test as many people as we’d want.

“If that means we need to play X amount of time behind closed doors, so be it. It’s not a nice thing - I’ve always said that one of my favourite things about the Premier League is that the stadiums are always full.” 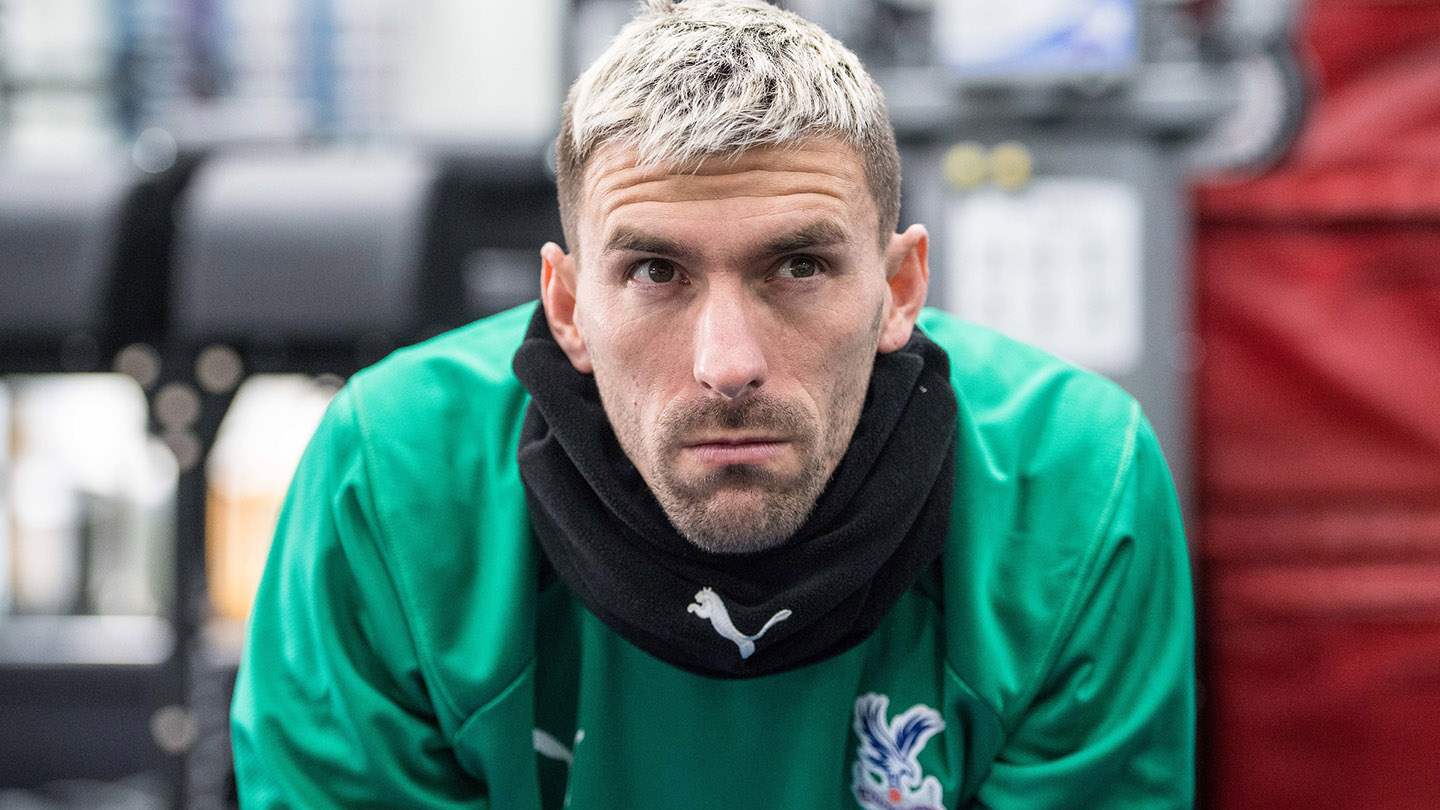 But whether his next 90 minutes come inside an empty stadium or not, the No.31 is determined that the team find the same positivity it finished with: “We would need to come out with a positive dynamic. We had picked up three wins in a row - three 1-0s in a row - and we’ve been in really good positions in the table all season. We need to go forward with that momentum.

“If we look at the journey we’ve had, with pretty much the same team we had last year - only with a few good additions - we’ve been really stable. We’ve given ourselves a gap of 12 points from the relegation zone when there are some teams that are one or two points off danger. I think that’s worth admiring because it shows the team’s still giving everything it has.

“We’ve got to make sure that we stay clear of a relegation battle and keep hold of that points advantage that we’ve got now. The higher up the table we finish the better, but first we need to make sure we’re playing Premier League football next season and for a number of years to come.”

There’s no question the ‘keeper’s feet are planted firmly on the ground, but with dreams of a best-ever Premier League finish still not out of the question, he’s just as aware of the heights that are still up for grabs.

“While points are in play, everything’s possible. Both the fans off the field and us who wear the shirt every day know the possibilities. We know what’s there to be played for. While those points are still there to be won, why couldn’t we push ourselves to an even higher finish?” 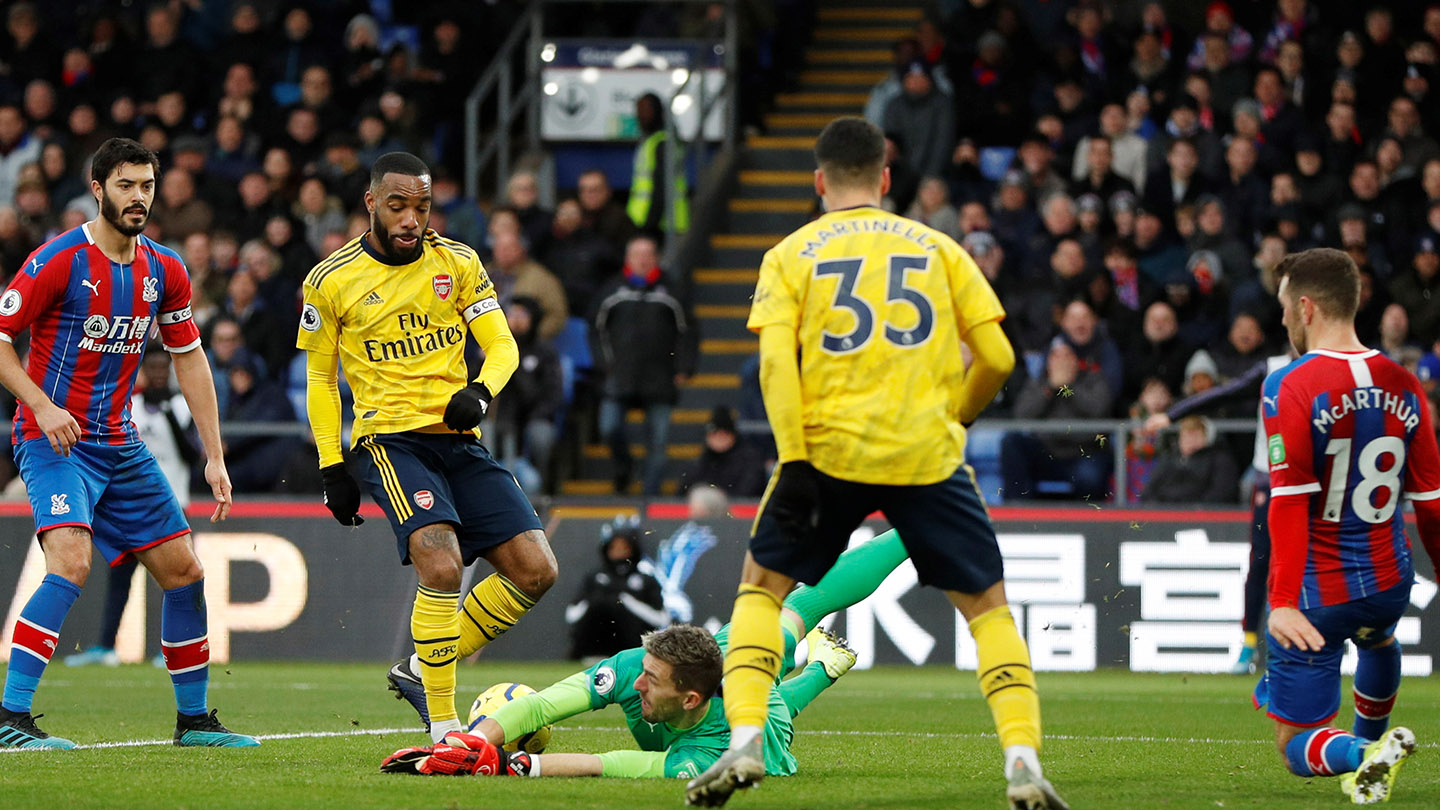 And if a strong end to the season is to happen, there’s no doubt the defence will need to find the same consistency it finished with. It’s a reliability VG seemed especially proud of given setbacks over the course of the year:

“It’s not easy to have such stability when we’re forced into changes in defence,” he admits. “We’ve had some important injuries, like [Joel] Wardy’s - he was out for six or seven weeks; Martin Kelly came in and showed he can play at right-back to a very high level.

“We had the same situation in the centre of defence and at left-back but we’ve still managed to compete really well. The best thing is that every single player who has played in defence has given everything they have. Whatever position they’ve played in, they’ve defended the shirt to the last second. Win or lose, they have all given everything until the very last minute and we’ve been able to pick up great results for that reason.

“I’m happy because we’re improving on the record from last year. I think the numbers for the whole of last season are similar to what we’ve already achieved this year - more or less. And even if the season were to finish next week, we’d still want to go on improving those numbers again next season. Hopefully next year we can do even better.” 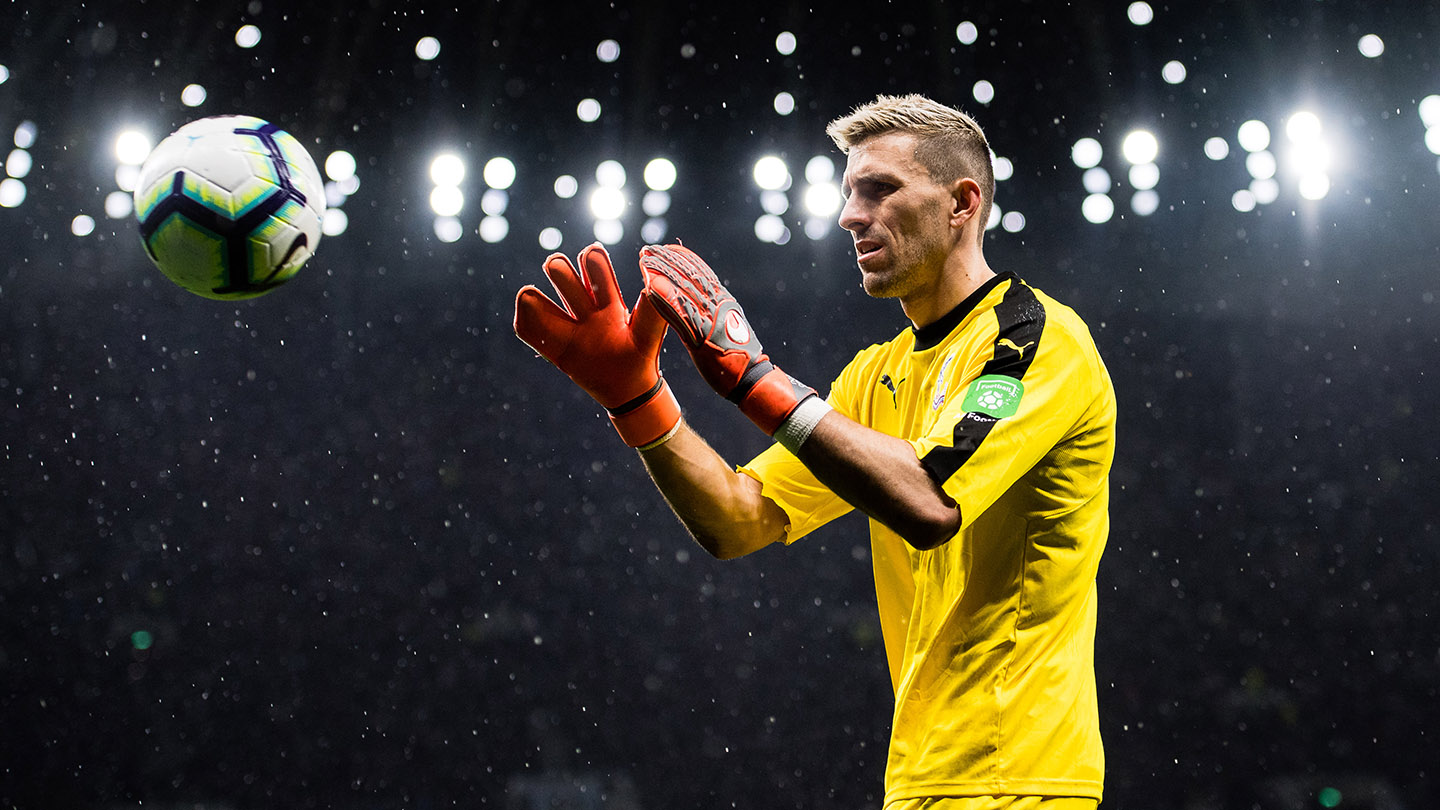 No matter the numbers, it doesn’t come much better than a clean sheet and three points on enemy ground - and as the conversation turns to February’s win at the Amex:

“It was special because I couldn’t play at Brighton [& Hove Albion] last season,” Guaita’s voice lights up. “Then when I did play at home we didn’t win either. When we played last year in December we drew and they played well. This year, finally, I could celebrate that win against Brighton [& Hove Albion]. And keeping a clean sheet as well. We really wanted to be able to celebrate at the end of that game. We worked hard for that.”

They’re the sorts of performances that make it easy to understand why the man from Torrent, Spain has become a huge fan favourite in a short space of time. But as far as he sees it: total commitment is the very least the fans deserve. 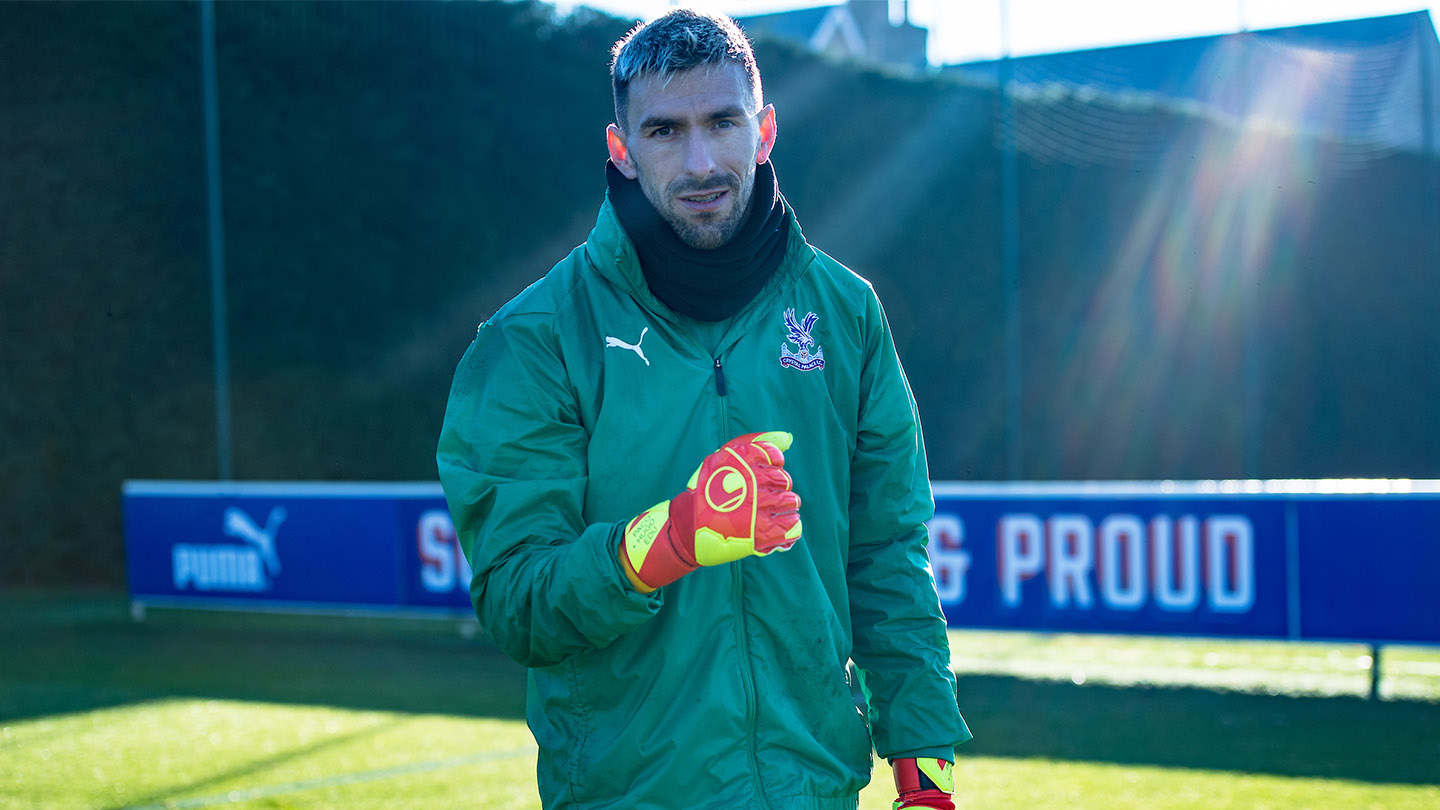 “It’s always important to work hard to get results,” he explains. “We all know that in football you don’t get your reward without working, and from a young age, I’ve always been taught if you don’t work, you don’t get anything in return. As far as I’m concerned your work shows on the pitch. I try and give everything I have for Crystal Palace and I think when the fans see that work, they give you the reward.

“That’s where you can build a mutual appreciation and a good relationship. It was the same at my past clubs, too. I remember that fans at Valencia and Getafe always treated me brilliantly for the same reason. I’m so happy with the Palace fans. I see how great they are when I’m on the pitch, in the stadium, even when I leave home.

“It’s a beautiful thing - to have that reward for all the work you do on a day-to-day basis.”

As things stand, Guaita’s day-to-day remains as unconventional as any player’s, and only time will tell if front-room first-time volleys pay off when football returns.

Until then, it’s been over 139,187 minutes since anyone’s put the ball past Vicente Guaita - including his son. Not bad, VG.