Cruiserweight boxer Richard Riakporhe says fighting for world titles are his aim in 2022, as he chatted with fans at Selhurst Park this month.

“It feels good, the energy is good,” he told Palace TV before the Wolves clash. “It’s good to see everyone congregating again.

“The thing about Crystal Palace is that it’s a family club. When you come here, everyone supports each other, and that’s what it’s all about. That’s the first thing you learn about Palace fans. 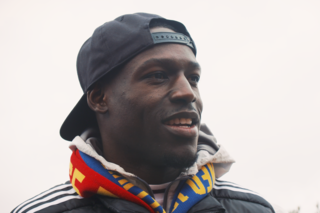 Riakporhe, who fights for the vacant WBC Silver belt against Olanrewaju Durodola at Wembley Arena this weekend, is a Palace fan born and bred.

“I grew up in the Aylesbury Estate in south-east London, just off Elephant and Castle,” he said. “My dream was to be a footballer from the very beginning – I always wanted to play for Palace.

“It was nice and local. A few of my friends played for Palace as well in secondary school, so that was my dream. One thing led to another, and I lost the desire to play football.

“I was looking for another sport to compete in, and I found boxing – or boxing found me – and now we’re here.”

With 12 wins from 12 fights in his professional career so far, Riakporhe is looking to move on to the next level after a challenging season.

“It was a really tough period for the last year and a half,” he revealed. “I had an injury, and I finally made my return last month.

“I got the W, and now I’m moving on to bigger and better things. We’re hungry, and now we’re looking to push on to world titles in 2022.

“World titles and unifications, that’s what we’re pushing towards.”

Could we one day see a world title fight take place at Selhurst Park? Riakporhe’s advice is to watch this space.