The Scotsman was born in Coatbridge in 1943 and began his career with Shotts Bon Accord before joining Celtic in 1959.

It was with the Hoops that Hughes truly made his name, playing 416 games and scoring 189 times.

After earning a European Cup winners' medal as one of the 'Lisbon Lions', featuring in the tournament's semi-finals and collecting eight Scotland caps, Hughes joined Palace in 1971. Signing alongside Willie Wallace, he had the misfortune of moving during a journalists' strike, so the pair of notable transfers went initially unnoticed. 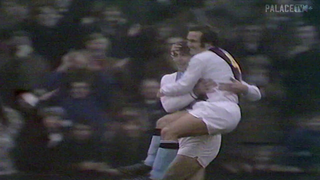 Hughes is most fondly remembered among supporters for scoring one of the club's greatest goals, against Sheffield United in a 5-1 win.

After entertaining fans along the left in 23 Palace matches, Hughes' south London spell was cut short by a knee injury, and he retired after a short stint with Sunderland.

His family said in a statement after his death: "He was surrounded by his loving family. He was dearly loved and will be sorely missed. Always remembered and celebrated with love by his wife Theresa, his sons Kevin, Martin and John, his daughter Joanna and his six grandchildren and extended family."