When Jolyon Palmer describes the atmosphere at Selhurst Park as exciting, it is no small compliment – after all, this is a man whose day job was racing at speeds of almost 300kph.

After three years driving in one of the toughest and most perilous sports around, Palmer retired from Formula One to take up a commentary role with the BBC. When the season kicks-off again in Bahrain this weekend, it will mark the start of his busiest time of year.

But you can be sure that wherever he finds himself around the world, one eye will always be cast back to south London.

“But when Palace are on a run or they’re winning a big game, the stadium’s rocking. It’s part of the fun.”

Raucous crowds are something Palmer knows a great deal about. Few athletes cover as much ground as F1 drivers do in a single season: this year’s calendar sees races across five different continents.

“Big time,” he says, when we ask if different races have distinct atmospheres. “Monza [the Italian Grand Prix circuit] is the big one, where it’s like the home ground for Ferrari. They all love Formula One, but they’re all in red and it’s just like a big away day. 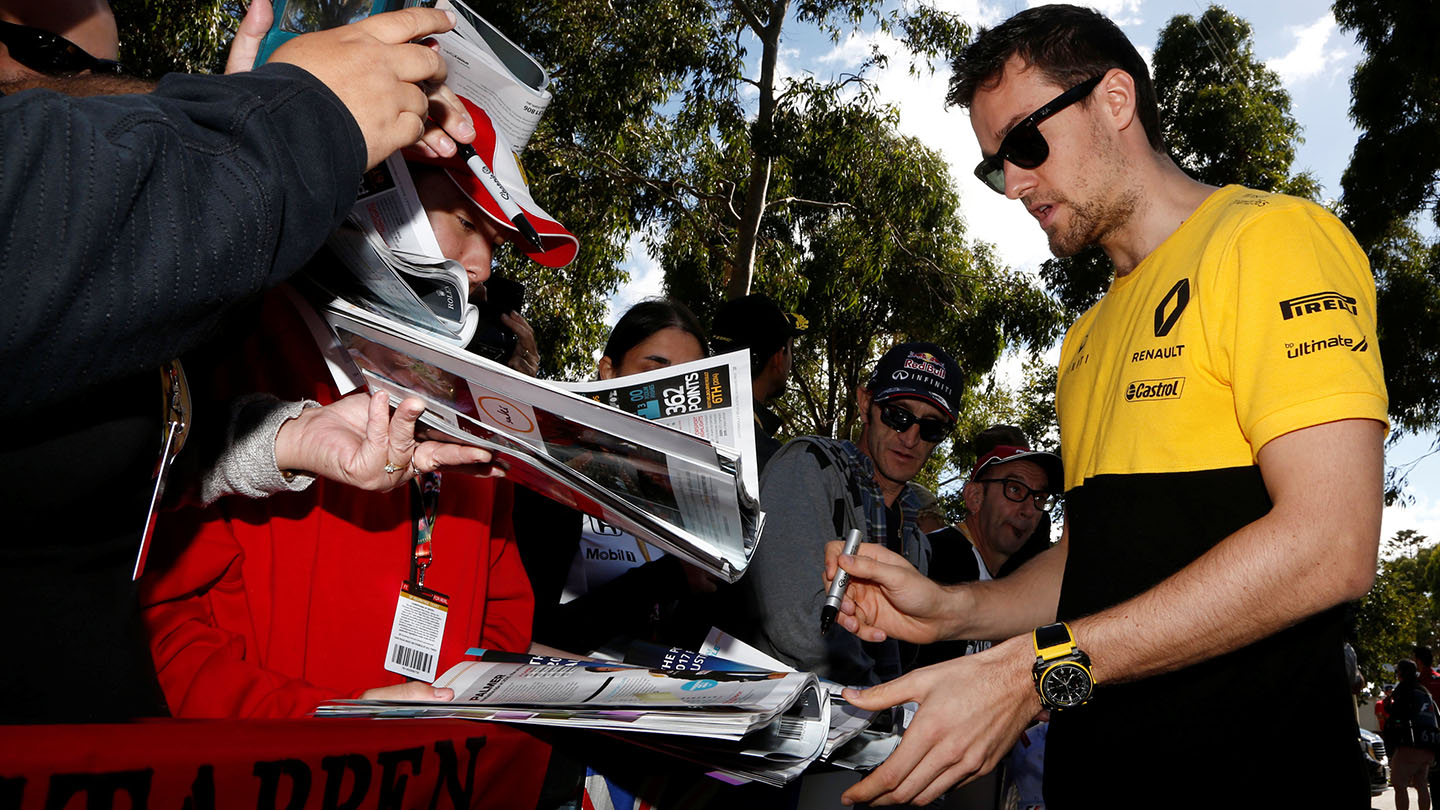 “They’re the most passionate in terms of tribalism; they love to see a Ferrari win. If you’re Lewis Hamilton and you’re racing at the front, it’s not hostile like football crowds but they were certainly cheering when [Charles] Leclerc pushed him off a few years ago to retain the lead.”

From the outside, it’s an impossibly glamourous lifestyle: fast cars, Monaco yacht parties and champagne on the podium. But behind-the-scenes, it’s just not that easy.

“The work was hard – it was a long season and very draining,” he remembers. “You spend a lot of time at the factory, and on the simulator. Unlike football, you can’t practise in between.

“The travel is the big thing that’s different compared to football: you spend a lot of time travelling. It is quite glamourous, but it’s the work, the training and the preparation time that gets missed. And there’s a lot of it.

“Outside Europe you go out a little earlier, so you get used to the time difference and the conditions, like Singapore where it’s humid. Then you get a day or two off where you can have a look around – that’s the fun part of the travel which is to explore the world.

While fellow-Brit and seven-time world champion Hamilton may be an Arsenal fan, there is no shortage of wider football talk in paddocks across the globe.

“Charles Leclerc is always kicking a ball around the paddock with Sebastian Vettel,” he laughs. “They’re both big football fans. Carlos Sainz is a big Real Madrid fan.

“When the World Cup or the Euros is on, there’s always big screens in the paddock. When the World Cup was on in 2018, it was a really good atmosphere by the track. Obviously we’re all there for the Formula One and are competing, but England were playing Sweden and there was a big screen on.

“There was a great atmosphere by the track. There’s a lot of interest in it – football is huge in general.”

That said, F1 is no place to be making friends. 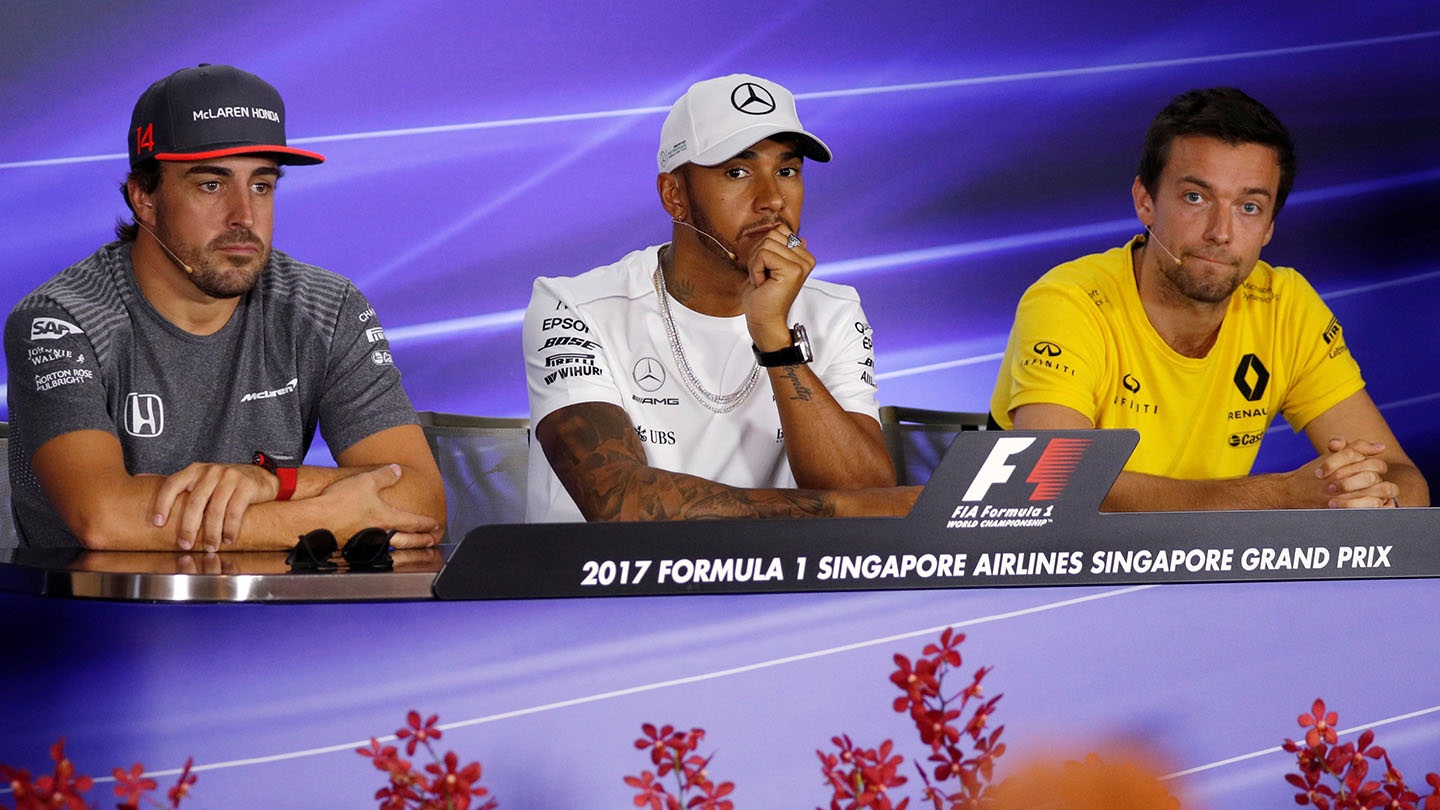 “You don’t hang out with them like normal,” he says. “You see them at the weekend and have a catch-up and a chit chat, and then batter them on a Sunday!

“There are mates in the paddock because a lot of them live in Monaco, but it’s competitors first.”

While most drivers head to Monte Carlo for the ‘easy life’, Palmer was at his most content somewhere else: south London.

“I just quite like the normalities of life,” he explains, “so going to the pub on a weekend off was quite appealing.

“My friends and my family [were there]. The team were based in Oxfordshire so it was easier for them. If you’re earning world champion money it might be more tempting to flee the nest a little bit more, but for me it was a good balance.”

Unlike many at Selhurst, Palmer was neither born Palace nor had Palace thrust upon him. His route was a strange one.

“I followed Ipswich when I was young,” he says. “I’ve got no family ties to football at all – my parents aren’t interested in it. But I’ve always loved it.

“Ipswich got promoted and I remember watching the Division One play-off final and thinking ‘that’s a cool team, I’m going to support them.’ Then by pure chance they had the most ridiculous season the year after and got into the UEFA Cup and everything.

“But at the same time, my best mate supported Crystal Palace, and because he did have family who supported Palace and used to live in Croydon, they used to go to the games. I would get taken along with them and it was great fun, so I went to a lot of games.

“I moved to London and I’d seen more of Palace play than anyone else, so I thought I should support them and go with it.”

Much like in his chosen career, Palmer came to realise that following his chosen football team came with its fair share of twists and turns.

“Mikael Forssell got a couple of goals – it was a great day out.”

It was perhaps a fitting introduction into the highs and lows of following the Eagles. On that day in 2000, Palace were 3-0 up inside half an hour, before Stockport fought back late on.

But Palmer was unperturbed and a loyalty was formed. He now looks to return to Selhurst Park when he can between races.

“In recent years I get to a handful of games per season,” he explains, “because with the F1 calendar my weekends are reasonably taken up. I saw so many defeats – seriously, I thought I was a bad omen!

“And then I went to the Watford game a few years ago. We were 1-0 down after three minutes, and sitting next to the Watford fans as well. It was a pretty tortuous 87 minutes.

“Then Palace turned it around in the last few minutes and won it 2-1. That was good fun – the stadium was bouncing.”

With the new F1 season kicking-off this weekend, Palmer feels the same excitement that surrounds Palace in August.

“There’s definitely similarities with Premier League opening day,” he says. “You’ve had the pre-season, you get a picture of who’s signed who and who might be the favourites.

“But you never know until you get to round one. Lights out and the first race is where the points are scored. The biggest excitement is definitely round one. 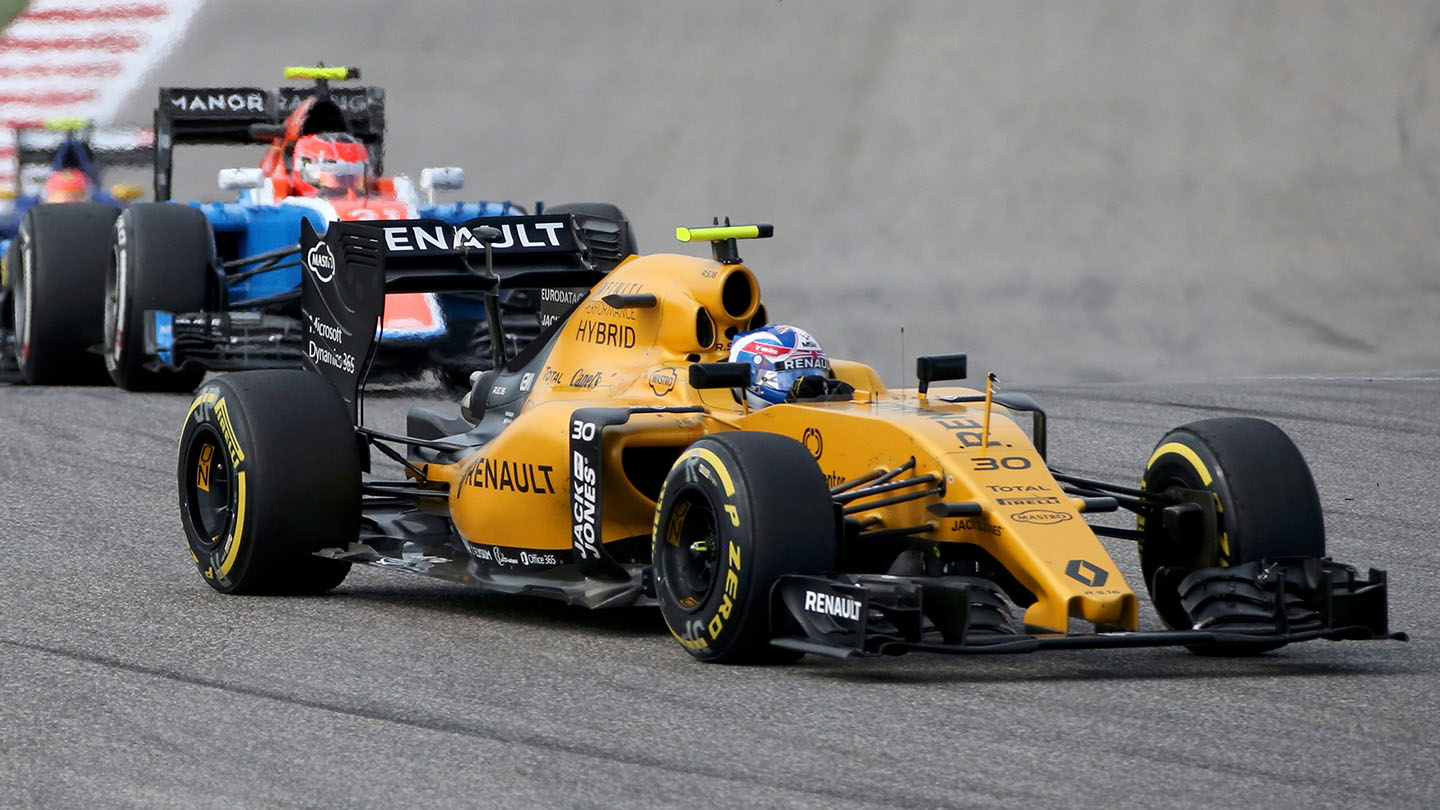 “The thing is, week one of the Premier League the champions can lose, and there’s 38 games and so much time to turn it around. One loss isn’t the end of the world; you can have a shock loss and recover well.

“If Mercedes turn up to round one in F1 and they’re just nowhere, that sets the tone for their season, because it’s harder to change it round from week to week.”

Part of the coverage once again this year, it would be a surprise if there wasn’t a touch of melancholy when Palmer remembers his time on the grid. So does he miss it?

“The most adrenalin you can get in F1 is the race start, when all the cars are packed together,” he says. “That’s when the most action happens. It never dies down.

“I think I miss lights out the most, and the thrill of wheel to wheel action. Or maybe just the buzz of a qualifying lap on a Saturday. The cars are so fast, it is pretty cool to drive.

“What will I not miss? There’s so much pressure that goes with it as well. There’s a huge work rate that no one will see, but the drivers are working really long hours and the pressure and scrutiny on every single thing they do is watched like a hawk.

“It’s a bit of an easier life on the outside sometimes!”

With the hectic racing calendar returning this weekend, it won’t be long before Palmer is back among the glamour of Monaco, Melbourne and Abu Dhabi. But when the chequered flag is waved and fans have returned, you can be sure a trip to SE25 is high on his agenda too.

READ NEXT: Hodgson - the secrets behind first season turnaround, and beating champions Chelsea