Moses Swaibu came to Palace at 16, captained the youth team and won individual accolades. The journey his career and life would take was never meant to happen. Here is part one of his story.

The definition of a preconceived notion is the following: a type of opinion, persuasion, sentiment, thought, view, personal belief or judgment that is not founded on proof or certainty.

If you were to Google former Palace player Moses Swaibu’s name, you’d certainly form your own notions.

Within 10 seconds of speaking to Swaibu on the phone, though, you'd realise those notions were preconceived.

“Any time Palace come calling I’m available,” Swaibu begins. And that is a theme that is present throughout the interview: gratitude and love for the club embedded in the community he grew up in. 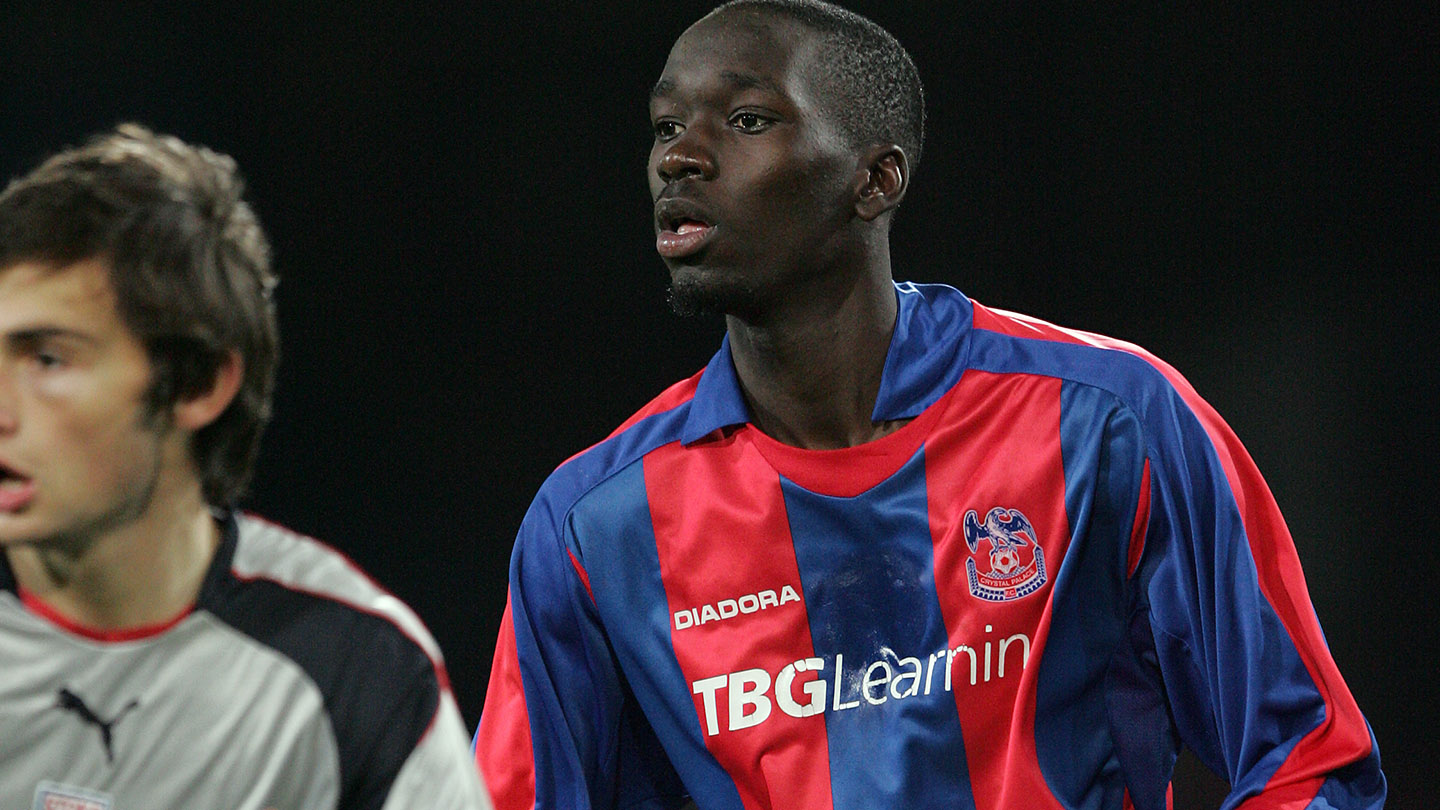 The elephant in the room is the match-fixing scandal. We will get to that. Swaibu doesn’t hide away from his past, after all it is the foundations of the great work he is now completing with the Premier League and Professional Footballers’ Association.

More on that later. “I was in Year 11 at school,” the now 30-year-old transports us back 14 years, “and I didn’t really have an idea of what the next stage of my life was going to be – I wasn’t very academic.”

Luckily for Swaibu, his dreams were about to come: “Palace scouted me, though, and I was offered to play in a trial game,” he recalls. “Even though there was 30 trialists, I was one of the few selected to come back.”

Throughout the 50-minute call with Swaibu, the name of Academy Director, Gary Issott, crops up. Later, we explain to Gary about how Moses details his discovery by Palace and we quickly realise that Swaibu is a modest person.

“Normally you’d look to take players from the age of eight-16,” Issott begins to add further context. “Those players make up your scholarship group. However, Moses wasn’t in the scouting system but we had an open trials game to add maybe one or two to our scholarship group – he was the standout player from the game.

“Our then-Director of Football, Bob Dowie, picked him out: tall, quick and likes defending. Off the back of that we got him in for a trial during pre-season and from that he did well enough to earn a contract.”

Having spoken to them both individually, you can imagine how endearing it would be to witness the pair in each other’s company. “Gary Issott was the one that signed me. Gary brought out things in me I didn’t know I had,” Swaibu talks of Issott in a way you’d liken to a son commenting on his father.

It is fitting, then, that Issott was the person to – no doubt with a wry smile - hint to Moses that he was the 2006/07 Scholar of the Year and Vice Presidents Young Player of the Year. 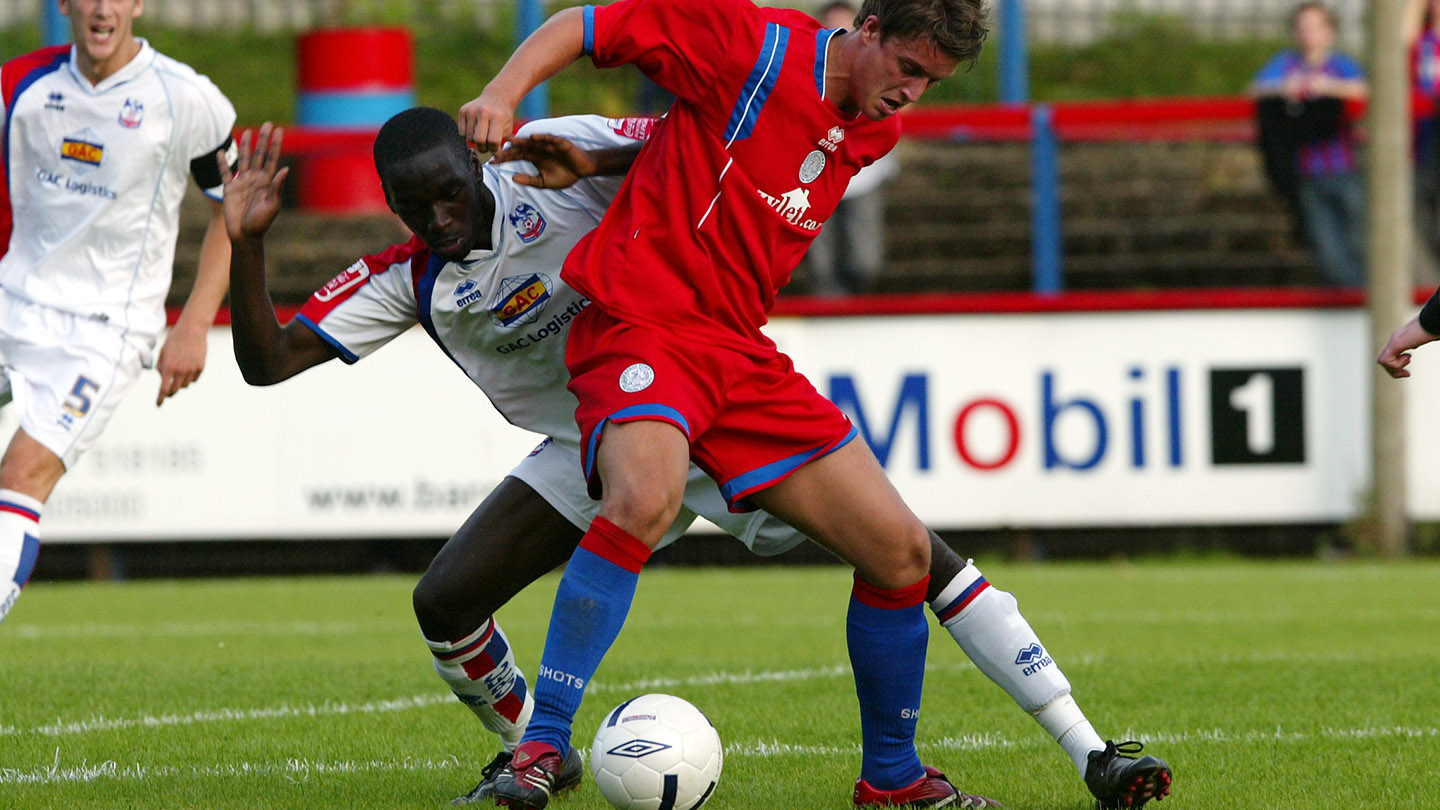 Just 12 or so months before, Swaibu was sitting in a classroom making an apathetic career decision. Then, he was standing next to Victor Moses at a Crystal Palace awards night saying: “‘Vic, mate, I can’t wait to see you collect your award.’“

Frustratingly, our time with Swaibu is a phone call rather than a face-to-face interview, because we imagine now we’d be viewing “the pictures from that night. I’ve still got them and if you look at my face it’s saying: ‘I honestly cannot believe this.’”

Another south London kid’s Palace dreams falling into place: “It was surreal,” Swaibu says, still struggling to process the fact he was at Palace. “Just a few months earlier I was sneaking in to Selhurst Park to go and watch games as my friend was a steward on matchdays.

“I remember always saying to my mate: ‘Imagine if one of us ever get to go and play on that pitch.’”

Imagine it? The now-30-year-old no longer has to do. He lived it. “I remember having a meeting with Peter Taylor the morning after the awards night and he was telling me that I was a big part of Palace’s future and that he was going to take me away on pre-season tour to Sweden.

“He said that he saw me as a long-term replacement for Leon Cort, and wanted me to mould my game around him.

“I played three of the four games on the pre-season tour, made my mark and played well.” 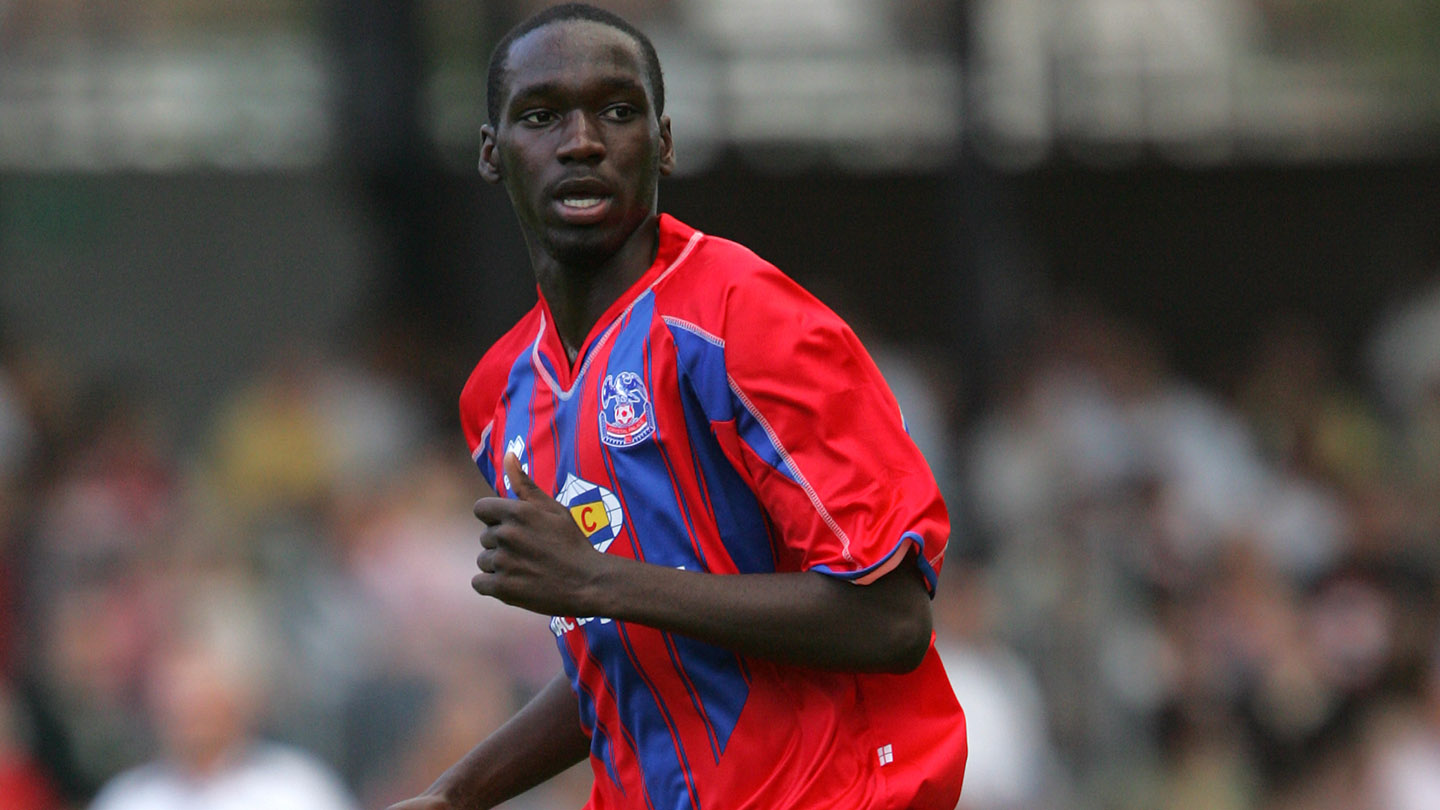 Swaibu is picking up pace now, reeling off all the things that happened to him over a milestone summer. He says: “Then we returned and I made my Selhurst Park debut in a friendly against Everton – a good Everton side, too, with Mikel Arteta and Andy Johnson playing for them in front of 20,000.

“I came on for the last 10 minutes, replacing Jose Fonte. Jose was an amazing support network for me – something like a big brother. He was always telling me stories about how he broke through in football.

“That 10 minutes felt like an hour.” He exhales, like he’s just relived all the emotions of that summer of 2007. “It’s quite cliché but imagine you’ve worked so hard for something, something you’re so passionate about. It almost brought tears to my eyes running out for the team I love, for the team I used to sneak into games for.”

This is the first time I’ve ever seen this pic thanks @CPFC Skip 🥇@M_Hudson5 pic.twitter.com/bx2HRMDVv8

The pace quickens again 13 years on Swaibu still gets excited about signing a professional contract with his local club. He says: “I was only watching these guys on Match of the Day a few weeks before and now I’m there with Neil Shipperley, Tom Soares, Gary Borrowdale and the rest.”

We ask him who in particular he looked up to in the Eagles setup. His reply? “All of them.” Clichéd perhaps, but that doesn’t make it any less true. Swaibu elaborates: “Because of my lack of application to education I was just so happy to be there.

“I can only imagine that the first-teamers felt sorry for me: a scrawny kid from the streets of Thornton Heath with holes in his boots and laces that couldn’t really tie up. I think people probably warmed to me because of that. 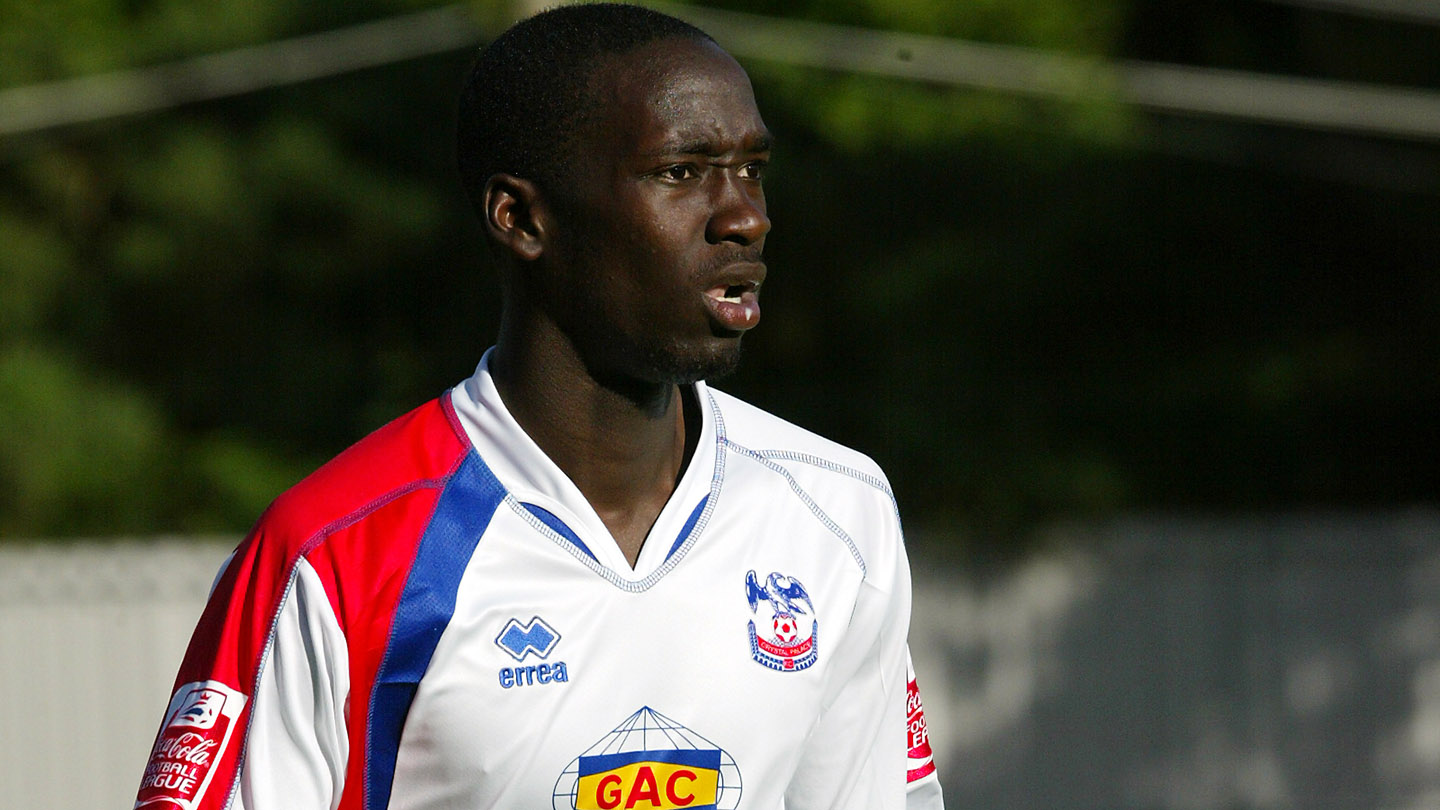 “Because I didn’t know what was to come, I just wanted to make the most of it and soaked everything up like a sponge.”

That sponge-like enthusiasm means we can fully visualise how the next story Swaibu tells us played out: “I never really wanted to go home, I just wanted to stay at the Training Ground. So, I used to just sit up in the canteen and watch first-team training sessions before I was part of them.

“I remember Emmerson Boyce being the type of person who would keep himself to himself. But I went up to him one day and just asked: ‘What have you done to be here?’ and he said to me: discipline, hard work and eating the right things.

“It sounded simple and it is but it’s hard to maintain that consistency. I understood from then, and going on to watch him then carry on and have the career he had. I understood exactly how he did that.”

Palace has always been a squad full of leaders and the era Swaibu found himself in was no different – whether it was the unassuming leadership of Boyce, the generosity of Fitz Hall or the “headteachers” approach of Clinton Morrison and Dougie Freedman.

Swaibu talks of these former teammates like he is still the newly-promoted 17-year-old youth team player. He continues respectfully: “I hadn’t seen Fitz (Hall) since I was 17 but I bumped into him at Tottenham Hotspur’s Training Ground speaking to the Academy teams as part of my work with the Premier League and Professional Footballers’ Association (PFA).

Look who I bumped into leaving........ Palace legend, Fitz was the first person to give me £200 Back in the day when you had to clean boots and wait for that Christmas bonus 🙏 pic.twitter.com/Y8ozHmxbCQ

“I remember Fitz coming over to me and saying: ‘you are going to be my boot boy.’ I remember every Academy player just waiting for that Christmas bonus from their first-teamer and seeing whether it was going to be like £50, £200 or £500.

“Fitz was the first person to ever give me money in my life when he gave £200 that year.

“Then you’ve also got Dougie Freedman, who was doing his coaching badges at the time, so he was training the youth team. His approach to discipline included things like making sure you washed your boots, making sure you’re walking with your chest out and making sure you understood what it means to be at Crystal Palace.

“Him and Clinton Morrison were almost like the headteachers for the youth team. Nothing ever went passed his eyes – he saw everything.

“You knew when he had entered a room.”

Player, manager or Sporting Director – nothing has changed.

It would be doing a disservice to say Swaibu is now rambling, but what we are trying to get across is there’s a sense of making up for lost time in everything he says: he is now understanding all the lessons he perhaps did not heed at a younger age.

“What you find in your career, the people like Dougie, Clinton and Gary, will tell you things at a young age that they’ve been through or witnessed – they’ve ‘got the t-shirt.’ But at a young age there’s also a lot of negative things around football and how each person responds to the advice from those type of people will make or break their careers.

“As I’ve got older, I’ve understood that. And I now look at players like Victor, with the career he is having, and I understand the sacrifices they’ve made and their families have consistently made to get them to that level.”

The openness in which Swaibu talks and the enthusiasm in which it is all delivered is unwavering. Until he then says: “You take your foot off the gas and you’re punished.”

A little drop in pitch and the only sentence that somewhat tails off slightly before he returns to his normal manner – but it’s enough for us to know this is when the story changes.

Click the banner below to read part two of Swaibu's story!