Geoff Thomas marched into the Wembley sun, nonchalantly tossing a ball in his hand. Further up, the black captain’s band hugged his arm under a bulging ‘90s track jacket as he entered the cauldron of noise, colour and tension that was the FA Cup final.

Steve Coppell led the way ahead of him and, to his left, Bryan Robson followed behind Alex Ferguson.

Nine years before, Thomas had been working as an apprentice electrician preparing to take a gamble with fourth-tier Rochdale.

"That was probably my biggest decision," the midfielder reflects almost four decades later. "Once I was in football, I just felt: 'Right, I’m starting now so I don’t intend to stay at this level. I intend to get as high as I can.'

"[At Crewe Alexandra] there was myself, David Platt and John Pemberton. Platty went down to Aston Villa and me and Pembo, six months apart, ended up coming to Crystal Palace... I think Ron Noades was the one who first saw me and John play and then Steve Coppell came up a few times. In the summer we had the opportunity of coming down.

When Thomas was scooped by a cash-strapped Palace in 1987, he joined a changing room which was steadily being moulded into the side Coppell would guide to promotion, the FA Cup final and a third-place finish respectively over three consecutive seasons. 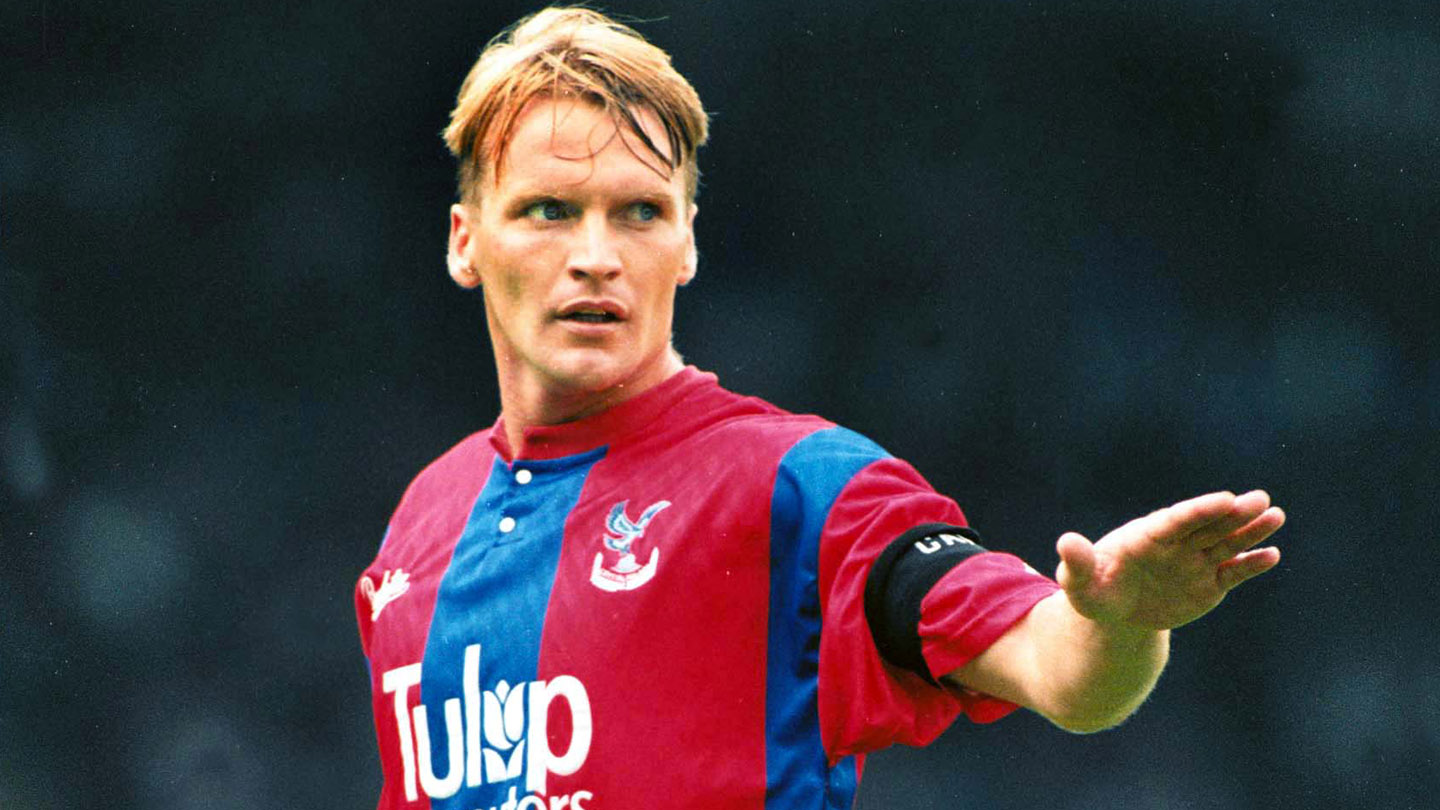 Thomas recalls the type of team he walked in to: "I came down with Neil Redfearn and he was a proper Yorkshire lad with his Yorkshire sense of humour - it was very dry. With the sharp-witted south London boys, it was always full-on banter. There was no settling in, it was straight at it… I was a bit mouthy, I’ve got to be honest, so I didn’t keep quiet.

"We used to play North v South [in training] every Friday and it was fierce. That competition we had, day in, day out, against each other sparked this team mentality that stood us in good stead for going through the leagues and doing what we did.

"Steve was astute enough to allow the characters of the team to mature and find what they were happy with. Andy Gray was a pretty mad character - I remember him once training in a sheepskin coat that was left by a supporter of a youth game at the weekend.

"It was a Monday morning and he was slide-tackling with this coat on! I’d imagine when the owner turned up and found his coat in such a state he wouldn’t have been too happy. Steve used to let things like that go because we weren’t shirking responsibilities on the pitch... That’s the making of a good squad."

Thomas got off to a strong start in south London, collecting the Supporters’ Player of the Season award at his first attempt and rising to earn the captaincy of a characterful squad.

"It was my natural game," he says, explaining what helped him lead such a side. "If you’re a decent captain, you obviously try your damnedest every game, but even when you’re having a shocker - and it happens - you’re still demanding from other players. That was me, though some players used to tell me to shut up.

"[Ian] Wrighty had so much ability and sometimes you could see he probably wasn’t at the level he needed to be to beat his opponent and he was finding out he wasn’t having a great game. A little gee-up and if you antagonise him a little bit, you suddenly found Wrighty was firing on all cylinders again."

We probe: 'Just a subtle word?'

"I’m not sure it was that subtle," Thomas corrects. "It was a pretty brutal team. If you weren’t performing, there was more than one captain out there. There were quite a few when I was there. If you were falling short of what people were expecting, you soon found out." 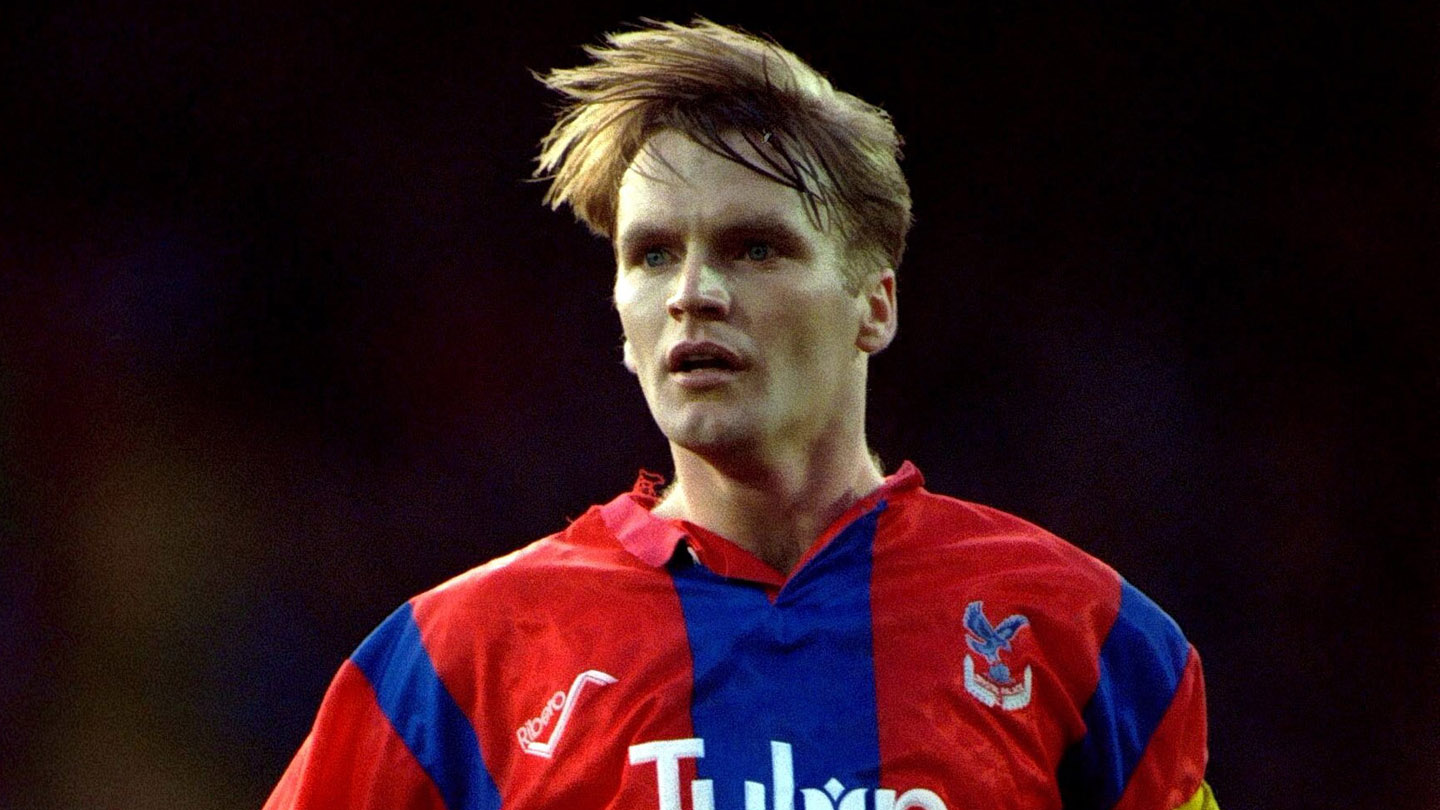 Bouncing from success to success, Thomas, Coppell et al defied the odds to reach the FA Cup final on May 12th, 1990. For Thomas, as he nonchalantly tossed a ball in the Wembley sun, coming against Manchester United was a chance to make history against a group of childhood icons.

"We trained harder," he says, explaining how the Eagles approached the clash. "We didn’t take our foot off the pedal… We’d go on horrendous runs up Farthing Downs; it didn’t matter how fit you were, it was painful.

"Before the game, we wanted to go out, enjoy it and not leave anything in the dressing room. We wanted to really put on a performance.

"You couldn’t not admire the guy I was walking out next to: Bryan Robson. He’d been a tremendous servant to English football and was the ideal midfielder a lot of players wanted to be: up and down, scoring goals, making goals, scoring with his head, both feet. He was just an iconic figure. To be walking out next to him and so many other players who were so well known, it was a privilege.

"I think we went out there to really try and make history. We were making history getting Crystal Palace to Wembley for the first time but everybody was looking forward to the end of the game and being able to say they were FA Cup winners. We were seven minutes away from doing that.

"We had to do the walk up the balcony, both sides, and pretend we were shaking dignitaries’ hands and all that sort of thing. I remember pretending to lift the cup to the Palace fans and just enjoying that moment. I was dreaming of the cup being in our hands."

After the game, with Palace un-done by Mark Hughes’ 113th-minute equaliser, Thomas joined Coppell in his hotel room to look ahead at the replay in five days’ time.

In that moment, he would make a suggestion that inspired a kit still argued about over 30 years later. 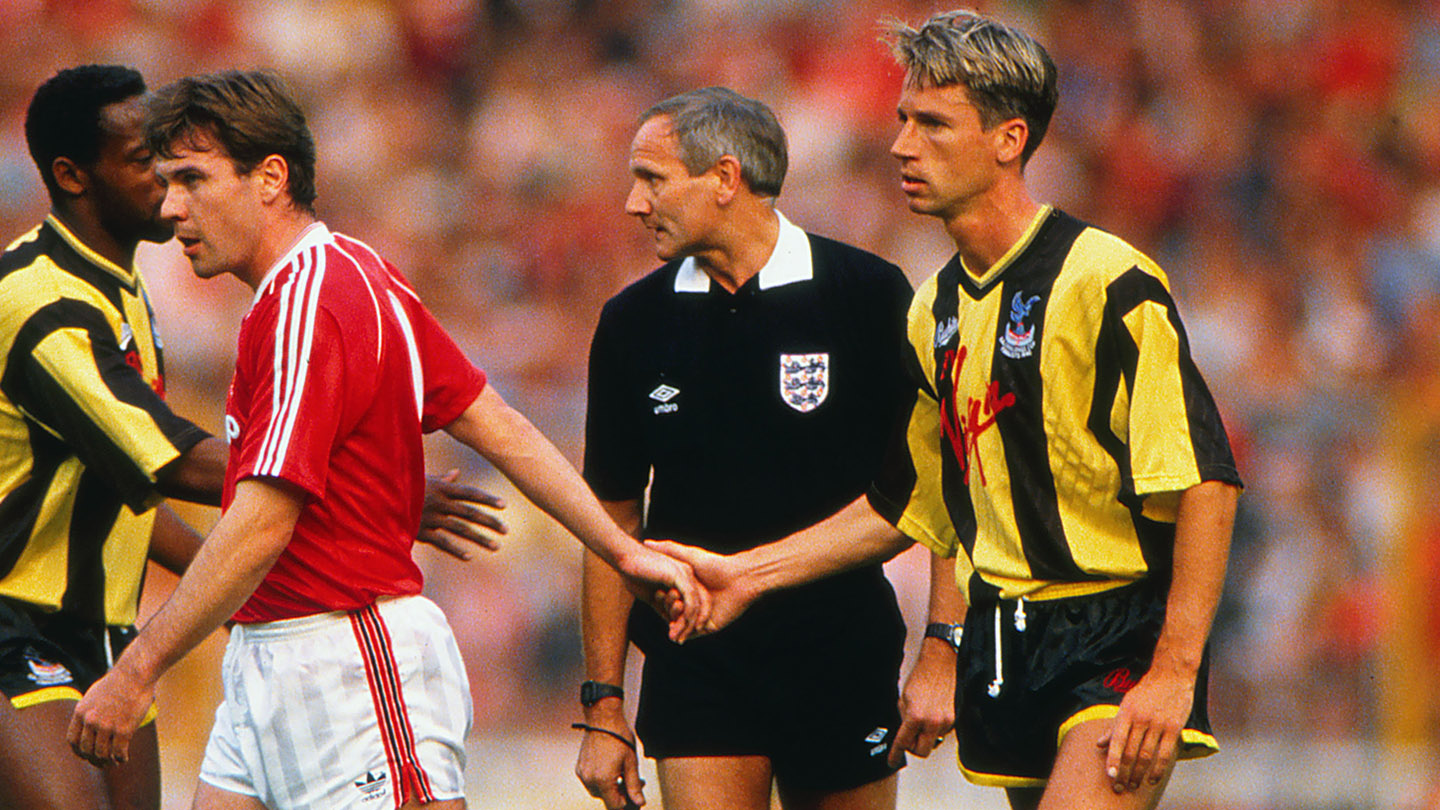 "Steve was very superstitious about kits and he wanted colours we hadn’t lost in," Thomas elaborates. "I mentioned to him that I played for a youth side which never lost in this bright yellow and black striped kit. That was it. That was my comment.

"Then all of a sudden we see this new kit turning up a couple of days after. I thought: 'Ah, this looks really nice,' and I’m sure if we’d won it would have gone down as a nice kit and a nice keepsake. I get the blame for it though and rightly so."

Putting the heartbreak of Cup final defeat behind them, Palace went on to record their best ever league finish the following season: sitting third in the top flight and scooping the Zenith Data Systems’ Cup, their only major trophy to this date. 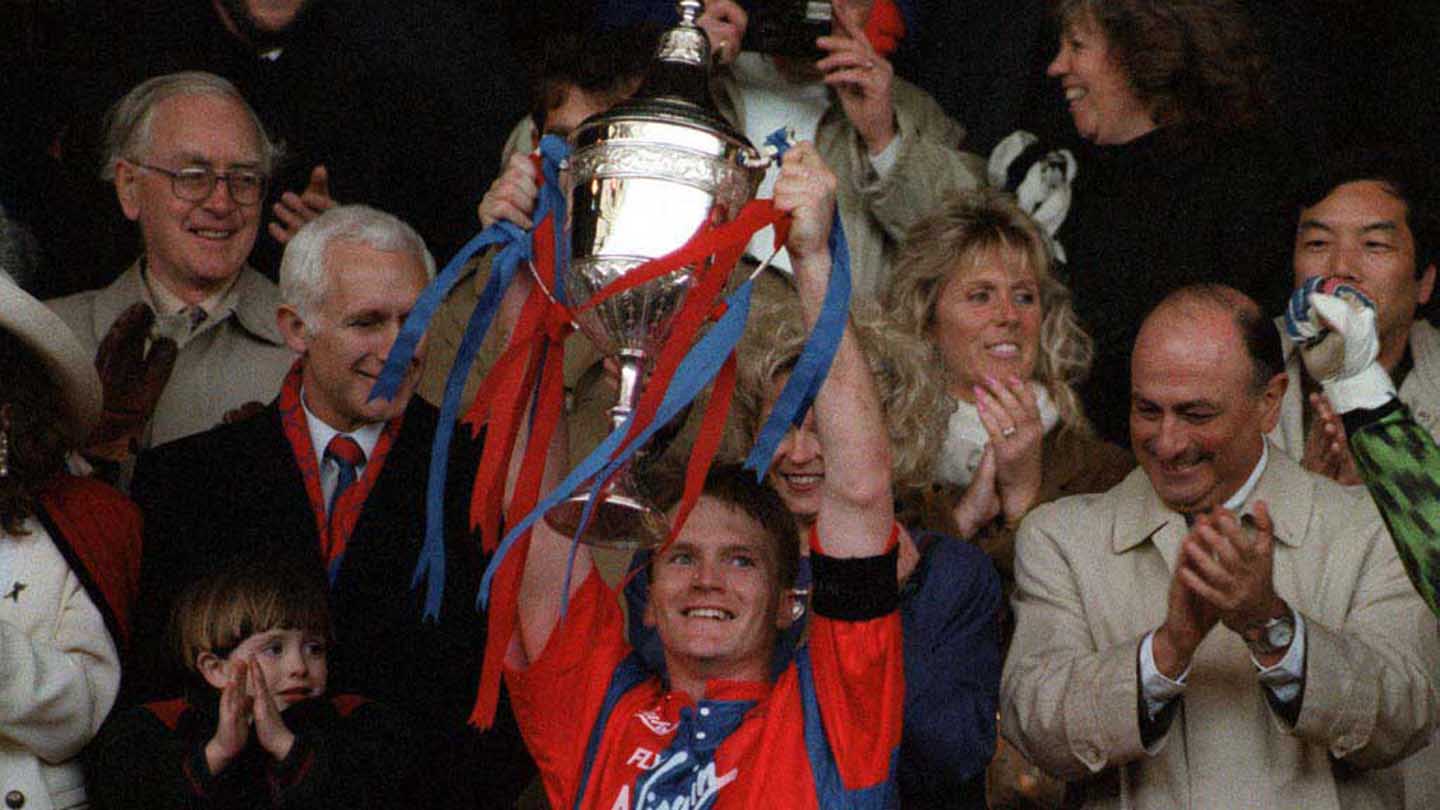 But the Eagles’ path to Europe was blocked as Liverpool’s continental ban was lifted at the end of that campaign.

After three triumphant seasons, the south Londoners began to slip.

"As soon as that opportunity [Europe] was taken away, you knew other clubs would come in for Wrighty and [Mark] Brighty and all the rest of the guys. As captain, I used to sit down with Steve Coppell and have chats about the way forward and he’d have ideas about the different players.

"I felt very loyal to Steve. I wasn’t looking to get away after Wrighty and Brighty left, I felt like there was a group of young players coming through - [Gareth] Southgate, Chris Coleman and other players that were ready to step up."

But Thomas’ commanding leadership and roaming talent in midfield did catch the eye of other sides and, by 1992/93, an offer arose that the 29-year-old felt needed taking.

"Arsenal came in the year before and then Blackburn Rovers came the summer after. Kenny Dalglish actually rang me up the night before the [Palace v Blackburn] game, totally against anything you should be doing. Ron Noades and Steve were saying that Blackburn were coming in and the deal’s trying to be done.

"For me, it was: 'Right, okay, I’ll wait and see what’s happening.' But this dragged out all the way through the first game of the season and we were playing Blackburn. I just really didn’t know what was going on that day, to be honest." Thirty years on, Thomas still sounds deflated recalling that summer’s confusion.

"It was all up in the air. I had this conversation with Dalglish who said he was going to sign me on Monday. In one way, he was saying 'don’t get injured'. Then, on the Monday, the deal fell through. I think Steve had had enough of getting rid of players. 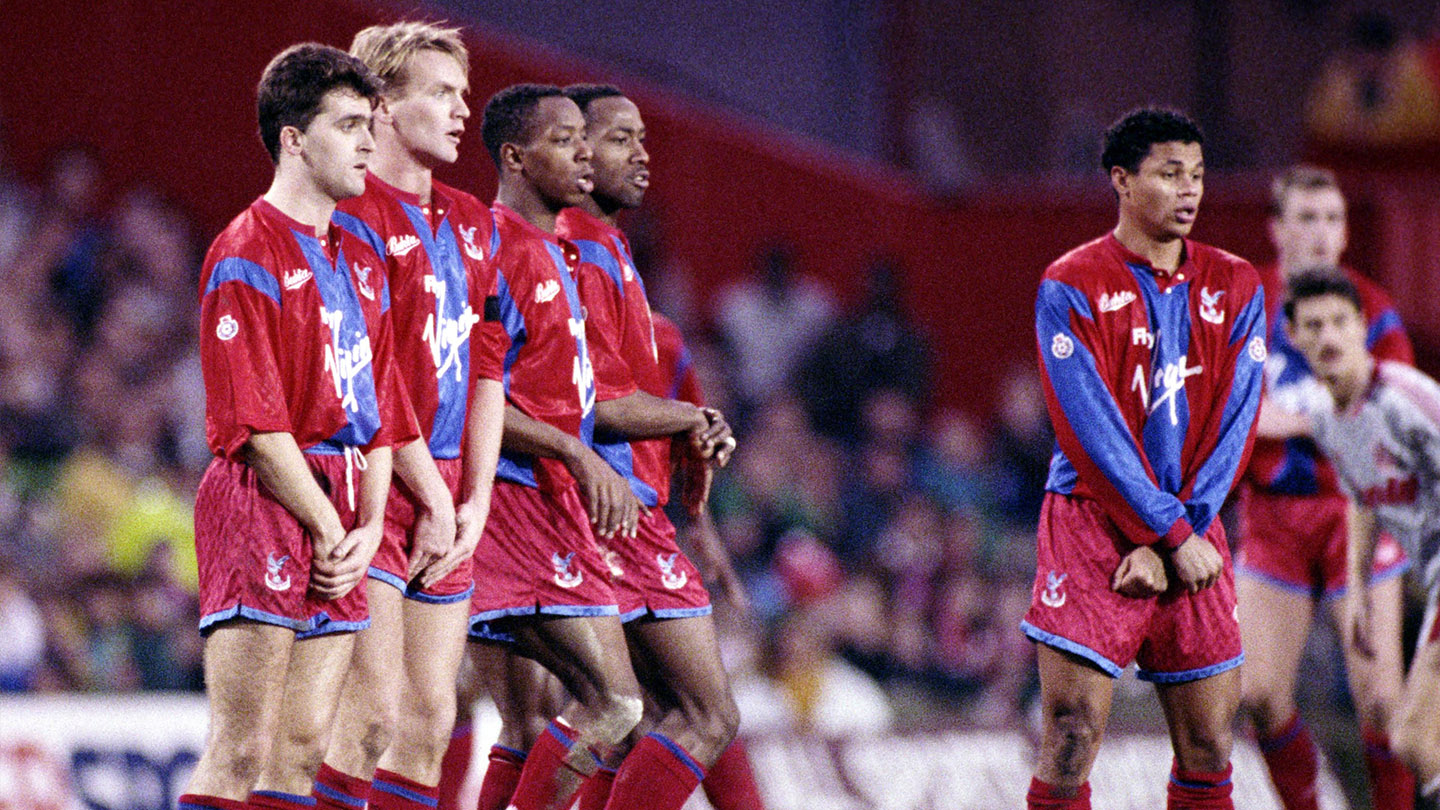 "The deal was for £3m. I’d been here for six or seven years and I was getting to an age where maybe it was a great deal for Palace. I looked at it that way. The deal never went through anyway, so it was a case of trying to get my head back on, which took a couple of months, to be honest. But then the side unfortunately just fell short. That was painful."

The angst in Thomas’ voice deepens. "Going to Arsenal and losing in the last game and going down with 49 points, that still hurts."

He returned to the Premier League with Nottingham Forest and ended a 20-year professional stint with the club Palace first noticed him at: Crewe Alexandra.

But there’s still one time that tops all of it.

"I loved every single minute," Thomas says, reflecting on his years with Palace. "Everybody has a top part of their career and that was definitely mine. On and off the pitch, socially with all my friends and teammates down there, it was just a good time.

“The success we were having and the spirit we had down there is pretty unique. It was special and I was captain of that period. I feel privileged to be named the captain of that era; I look back fondly on every single minute of it."

Today, Geoff raises money and awareness for the charity, Cure Leukaemia. He works tirelessly having been diagnosed with leukaemia in 2003. To find out more about Geoff’s work and donate to his cause, please click here now and support our skipper.