Hodgson reveals the blueprint behind victories at Man City and Brighton

After Roy Hodgson became the first man since Steve Coppell to reach 150 matches in charge of Crystal Palace, he sat down to talk through some of his most unforgettable victories to date. In Part Two of the manager’s masterclass, he reveals the secrets behind key victories over Manchester City and Brighton & Hove Albion.

In late 2018, Manchester City were at the top of their game. On the back of the first ever 100-point-season, they were battling Liverpool for a second successive Premier League crown, and had only lost twice at the Etihad in two-and-a-half years.

More pertinently, they had put five past Palace on both of the Eagles’ last two visits. But for Hodgson, any discussion of those defeats was unnecessary.

“It’s the sort of thing I read about people supposedly saying or doing,” he says, “but in my experience, it’s not a question of bringing the players in and saying: ‘listen, you lost the previous two games 5-0, now you can win this one.’

Instead, forensic tactical analysis and meticulous preparation were key. Hodgson relays how he addressed the players. 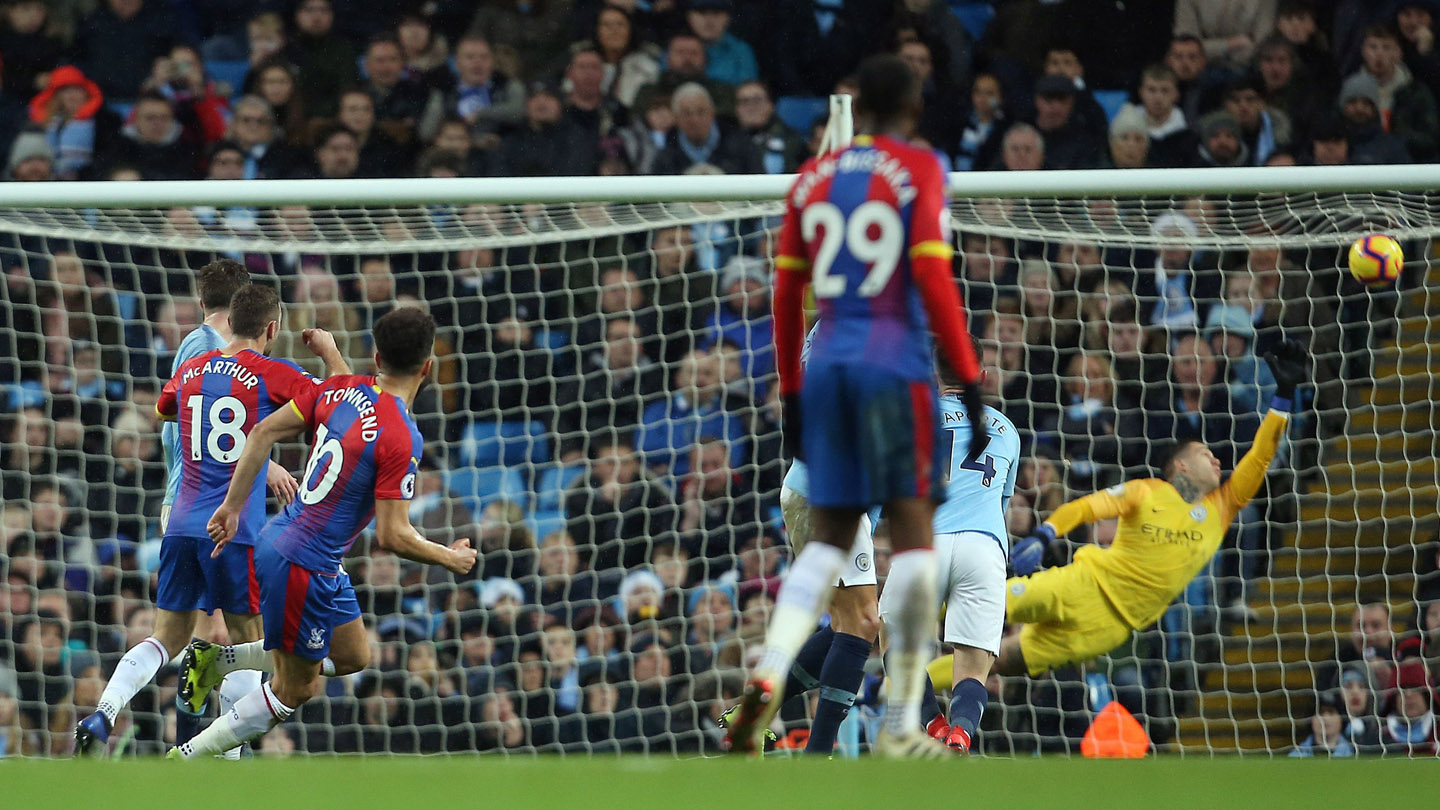 “‘Make sure they don’t get into the spaces they want, or get the shooting opportunities they want. Then, when we win the ball, we’re going to exploit the fact that they are flooding players forwards. We’re going to move and recreate the attacking shape of our team after being in a defensive mode.’”

With the build-up complete – you can read in detail about how Hodgson prepares for matches in Part One here – it was up to the players to carry out their instructions.

“I remember very well what a remarkable job Wilfried Zaha did as a lone centre-forward,” Hodgson recalls. “We doubled up down the left-hand side with [Patrick] van Aanholt and [Jeffrey] Schlupp, and with [Max] Meyer and [Aaron] Wan-Bissaka down the right.

“Andros Townsend dropped in behind Wilf to boost our midfield strength, so we didn’t get outnumbered and players weren’t drawn out of position. Wilf was left to doing a fairly lonely striking role for us, making sure he occupied their defenders.

“He never gave them the opportunity to come forwards too much themselves, and he was always looking for us to get the ball out to him and stretch them if we had any possession."

After Schlupp had cancelled out Ilkay Gundogan’s opener, up stepped Andros Townsend to score Palace’s Goal of the Season.

In Hodgson’s position, the initial joy is followed by the realisation that there is a lead to hold-on to. There is no time to bask in the glory; decisions have to be made.

“Oh I enjoyed it,” he says. “There is time enough after enjoying the goal and the celebration to get your feet back on the ground and your mind back on what’s going to be needed to keep this at 2-1.

“We knew we were going to be under a lot of pressure… because of their incredible passing ability, movement, and their awareness and composure. All the things every team would like to have, they have in spades. 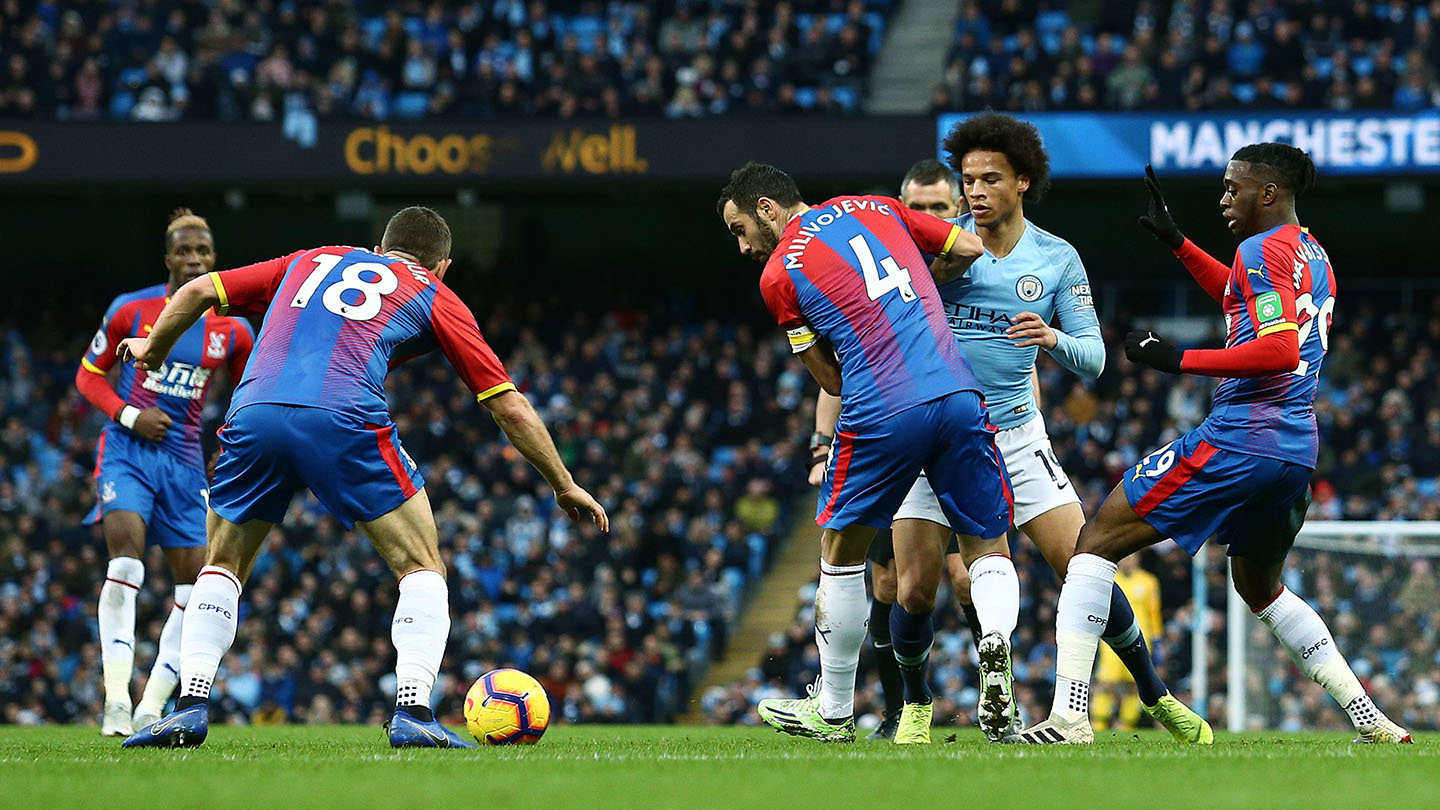 “[I thought:] ‘OK, we’re one up. Now they’ve got to come and score two goals against us.’ So we knew there would be a long period where we would be under some degree of pressure. The third goal showed that we could break out from that pressure and create very good chances of our own.

“And then, unfortunately, you do go into extra defensive mode, whether willingly or not. It led to a fantastic rear-guard and defensive action from the whole team to make sure they didn’t get too many more sights at goal.”

A first win at the Etihad in 28 years, another victory over defending champions, and another special atmosphere in the dressing room. But for Hodgson, every win is something to be savoured.

“Special wins bring about that extra joy over the ones that you might regard as more mundane,” he admits. “But the one thing I would say is that if you’re Crystal Palace Football Club and you’re in the Premier League, every win is of vast importance.

“I don’t care if it’s at home to Sheffield United who are the bottom club, or away to Manchester City who are the best team I’ve seen in English football for as long as I can remember.

“Teams like Man City, Man Utd and Chelsea, who spend bundles and bring in the best players the world has got to offer, they get that feeling a lot more often. We’re in the group that doesn’t get so many, so every time you do it’s a time to open the champagne.”

After the match, Hodgson lets his players celebrate and enjoy the atmosphere. The serious considerations – the lessons learned and details to remember – are dished out in training.

“We don’t debrief directly after matches very often,” he explains. “I often say a few words. But debriefing the game would start at the beginning of the following week.

“On Monday the analysts would start putting together what interests us from the game, and the highlights we want to show the players. Then we’d bring them in, often as groups: attackers as one group, defenders as another group, or possibly the whole group together, to go through everything that had happened.

“What we were pleased with, what we think worked for us and perhaps what we needed to work on.” 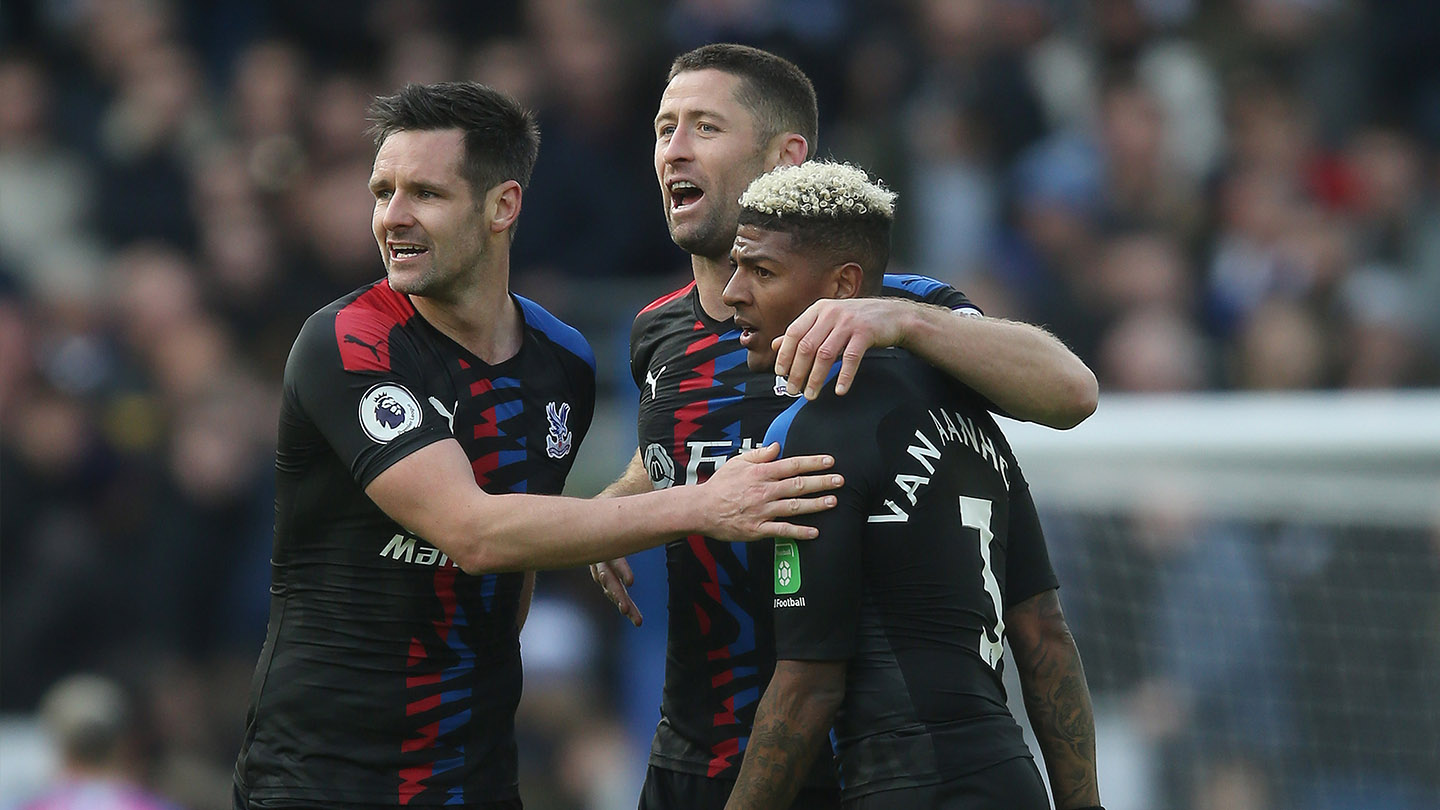 Less formulaic is the furore surrounding big rivalries. Ahead of trips to Brighton & Hove Albion, Hodgson is aware that a hostile atmosphere awaits, but is reluctant to let it influence his selection.

“There are players who get affected by the febrile atmosphere,” he admits, “but if they’re among your best players, or players that you think the team might need to win the game, it’s a bold decision to leave them out – and one you might bitterly regret.

“I would sooner regret the atmosphere affecting a player’s performance more than I would have liked, rather than regretting we lost because I used another player.”

After all, meetings between rivals rarely stick to the script, and so there is little point trying to second-guess fate.

“Everyone would love football to be scientific,” Hodgson says. “Every year I’ve spent in football, the effort to make football scientific grows, from statistics we’re battered with to suggestions that we can fix this or that shouldn’t be happening.

“All the science in the world can’t cope with that. The only thing that can help is what the players know about football, that they know what is required of them, and their ability to reproduce that.”

In picking his side Hodgson always casts an eye on the opposition. Ahead of the visit to Brighton in February 2020, one aspect of the hosts’ attacking threat stood out.

“Brighton are particularly dangerous from set-plays,” he explains, “because they have so many big players and a good delivery. So of course, you need a certain number of big players to be able to deal with them.

“Every player has his own quality and no player is the same as another, but in terms of their general quality you do sometimes have players in the squad where you know whichever one I choose is going to do a good job for me. He’ll understand what is required.

“If you’re fortunate enough to have that choice, then the way the opponents play and what they are going to bring to the game can have an effect on your team selection.”

How, then, do you tell a player that he won’t feature in one of the biggest games of the season?

“That’s always one of the hard parts of the job,” Hodgson reflects. “In particular if you’re taking someone out of the team who has been playing for a while, because maybe you’re not happy with their performance. It’s a very difficult aspect.

“The man management we have to do is part of our job. I would never do it on the day of the game, that’s for sure. I would say the day before at the latest.

“Quite often that talk is softened by the work we’ve been doing in the week on our team shape. Often players get a feeling of: ‘Whoops, the shape is like this and these are the ones he seems to be concentrating on, and it seems like I’m not going to make it.’

“In a sense, you prepare the blow so you don’t lead someone on to thinking: ‘Well, I’m in this week,’ and then you come along on Friday and say: ‘No, you’re not.’”

Disappointment abounds but then, for a manager, that is the perfect reaction.

“It’s not going to be popular with the guys you’re leaving out,” admits Hodgson. “Some managers would adopt and justify a more brutal approach: ‘You’re all paid to play and I’m paid to choose the XI. If you’re in it, good luck. And if you’re not, get on with it.’

“But I’ve always tried to at least speak to people and justify perhaps in some way.” 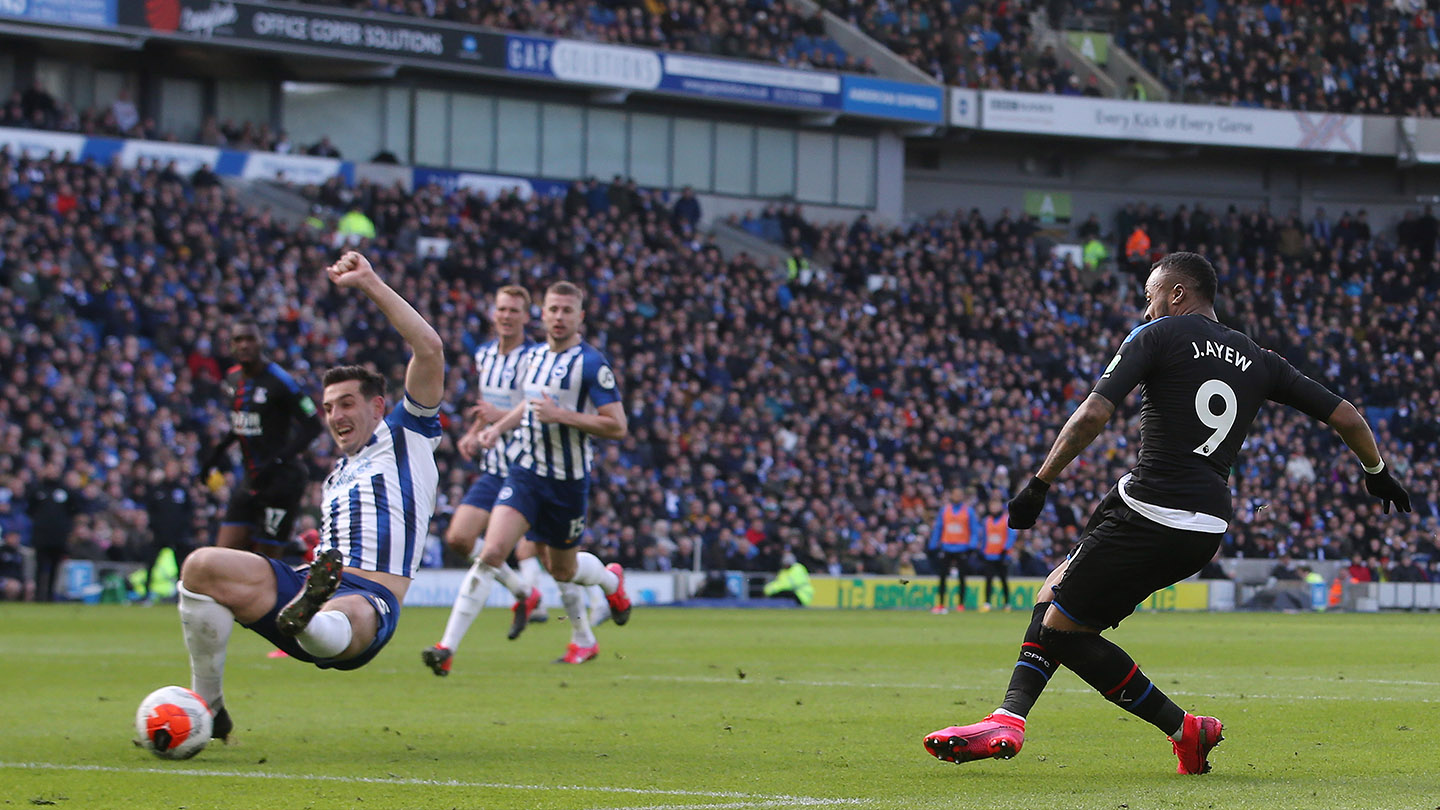 Memorably, Hodgson’s selection against Brighton paid off, as Jordan Ayew’s smart finish secured all three points at the Amex for the first time in seven years. Watching the highlights back, the thing that Hodgson misses most is the fans.

“There’s no doubt that things are far, far worse today,” he says. “Looking at the clips where you see fans celebrating and the joy in the terraces and in the stands, that’s something that increases your enjoyment, your own satisfaction, your own wish to celebrate.

“It’s not the same without fans, there’s no question about that. The feelings you have during and after the game are not the same, but it’s what we have… It would have been fantastic the other night against Brighton if our fans had been celebrating that 2-1 victory away – we’d have felt even happier than we did.

“None of us want to get used to it, because we want the fans back and we want the football that we’ve known all of our lives back.”

With further memorable victories surely on the horizon, the feeling is no doubt mutual.

Read Part One HERE, in which Hodgson reveals the secrets behind his remarkable first-season turnaround, and beating champions Chelsea.