Hodgson: The secrets behind first-season turnaround, and beating champions Chelsea

After Roy Hodgson became the first man since Steve Coppell to reach 150 matches in charge of Crystal Palace, he sat down to talk through some of his most unforgettable victories to date. In Part One of the manager’s masterclass, he discusses his first few weeks in charge of a squad seemingly in turmoil, and reveals the secrets behind the victory over Chelsea that kick-started a memorable campaign.

When Hodgson took over in September 2017, Palace had made the slowest of starts to the campaign. After four defeats without scoring, the manager’s job was as much psychological as it was tactical early on:

“We were a wounded team when I came in,” he says. “Some players had been sent away from the first-team to train with the Under-23s, players that I wanted to use.

“The first thing to do was to try and make certain that they realised that we were a group that needed to work very closely together. We needed to work after a set pattern.

“We were facing games against Manchester City and Manchester United, which were very hard to get points from, so we were staring down the barrel of at least six defeats at that time. It was important to get their minds focused; whatever happens, even if seven games go by and we don’t get the points we need, there are still an awful lot of games left.

“In those 31 games we’re going to have to play the type of football which suits us, which gets the best out of us, and which gives us at least a fighting chance to get some points on the board.”

Hodgson had already masterminded one great escape, across the capital at Craven Cottage, and he was keen to avoid a similarly late surge.

“I had the experience with Fulham,” he recalls, “where we had to wait until the very last games of the season to pick up the points we needed to stay in the league. I said to the players: ‘If the worst happens, that’s what we’ll have to do again. But hopefully we’ll get enough points beforehand to avoid that scenario.” 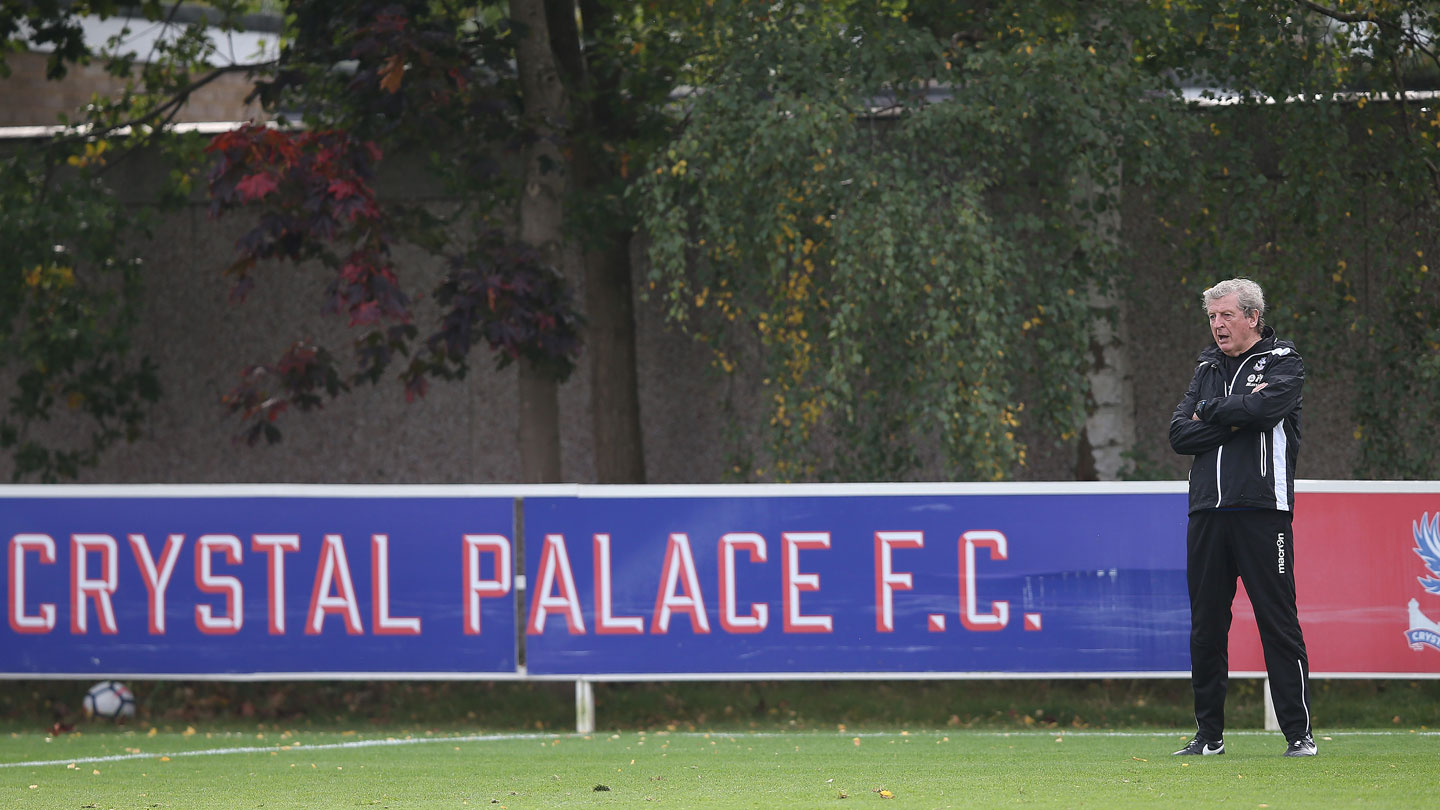 At this juncture, training was focused on the fundamentals, as Hodgson looked to reshape the squad in his image.

“In the early period it was very much [working] on our principles of play,” he explains. “How we wanted the team to defend, how we can best make use of our attacking possibilities. We’d had a lot of problems with injuries.

“Wilf Zaha had missed a number of games – I think Chelsea was the first one he had played since the opening day – so it was very important to get back on track and to use him to the best of our ability, because he was going to be the player with the wherewithal to cause all teams in the league problems.”

Long before the arrival of the then-champions, Hodgson was beginning to plan his starting lineup. Indeed, it’s something he says is usually done on the way back from the previous match.

“After one game has finished, you have an idea going forward. You know what you’re looking to do, especially if you’re looking to make changes to the team. If someone is likely to cede his place in the team, you’ve got that in mind almost directly after the previous match, when you’re on your way home.

“But then a lot of what goes on in the week might be geared towards any changes you might be looking to make in terms of personnel,” he adds. “Looking at the lineup against Chelsea, it doesn’t seem to me that we had an awful lot of choice.

“As far as the front players were concerned we were really limited, because we were playing with two players up-front – [Andros] Townsend and Zaha – both of whom were not out-and-out centre-forwards. They were makeshift centre-forwards that had made a career playing on the wing, and we were using them as twin strikers.”

With his team set, Hodgson and his staff turned their attention to the opposition. It was a Chelsea side full of confidence having stormed to the title just months earlier, inspired by the genius of Eden Hazard.

“We’d prepared for the game as we prepare now,” he says. “Our video analysts put together all the clips we thought were valid from Chelsea’s play, and [showed] what that would mean for us in terms of how we should defend, and how we should attack.

“We were very anxious to make sure that we doubled-up on Willian and Hazard, who we considered to be two very important players in their attacking lineup. We made certain we got around [Cesc] Fabregas when he went deep to receive the ball.”

The plan to nullify Hazard was typical of an approach to keep talismanic opponents quiet – but it was never as simple as focusing only on the man himself.

“It would be in relation to what they do as a team player,” Hodgson explains. “They play in this way, they take up these positions and they look for these types of passes. 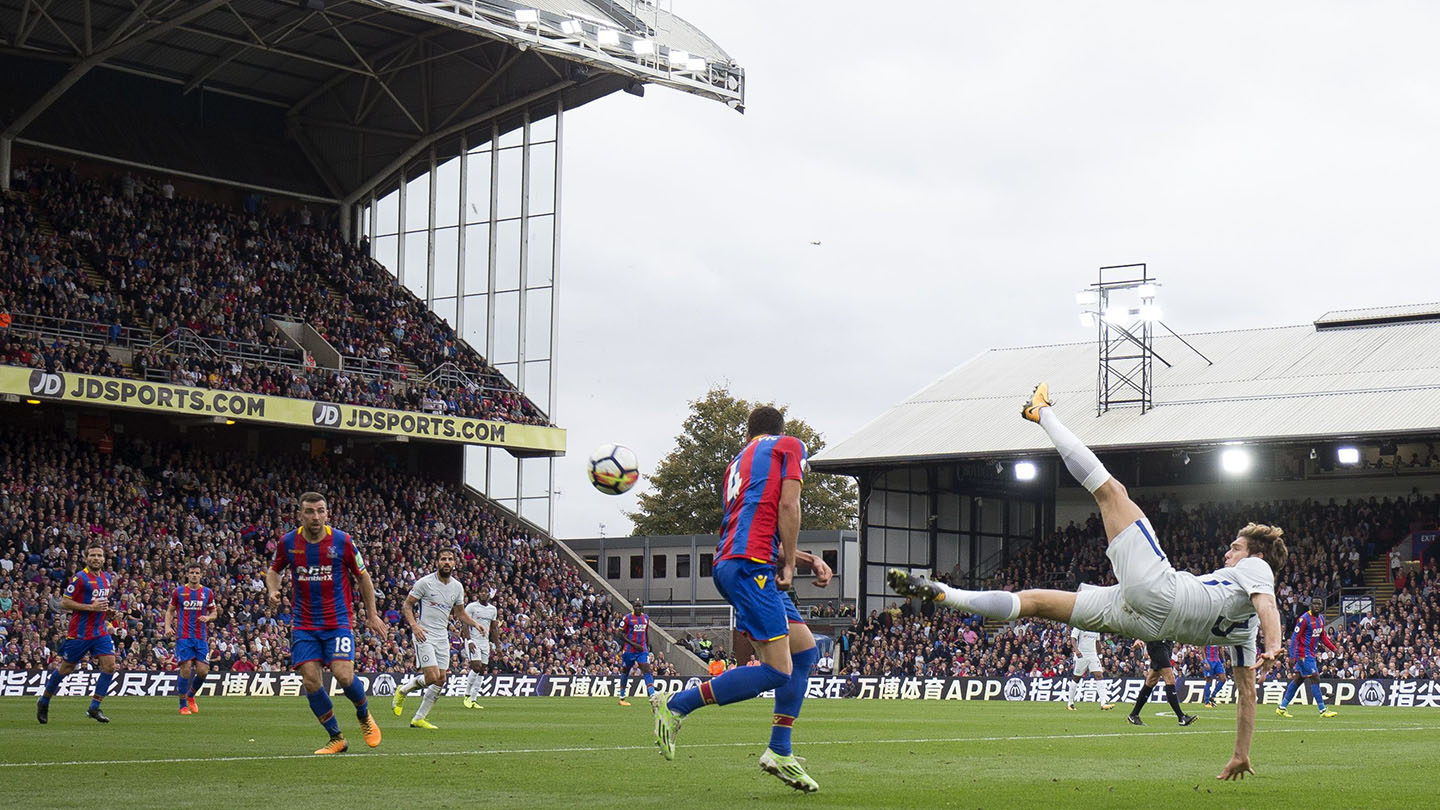 “That’s still the same today. Every time you play a team today there will be perhaps one or two players that will be very important in terms of either starting the play off, or making goal chances, or finishing the chances off.

“By contrast, there will be defensive players that you look at and analyse what they do as an individual and as a group, in the hope that you can find a strategy to get in behind them and cause them problems.”

And so came Chelsea, arguably Palace’s toughest test of the season. After seven games with nothing to celebrate, Selhurst Park was soon rocking once again. Racing into the penalty area, Yohan Cabaye caused chaos among the Chelsea defenders and forced the ball home off César Azpilicueta for Palace’s first goal of the campaign.

“I remember it well. It’s still – luckily – the feeling that one gets today. It didn’t seem to vary a great deal from the feeling I had the other night when we scored in the last minute against Brighton!” 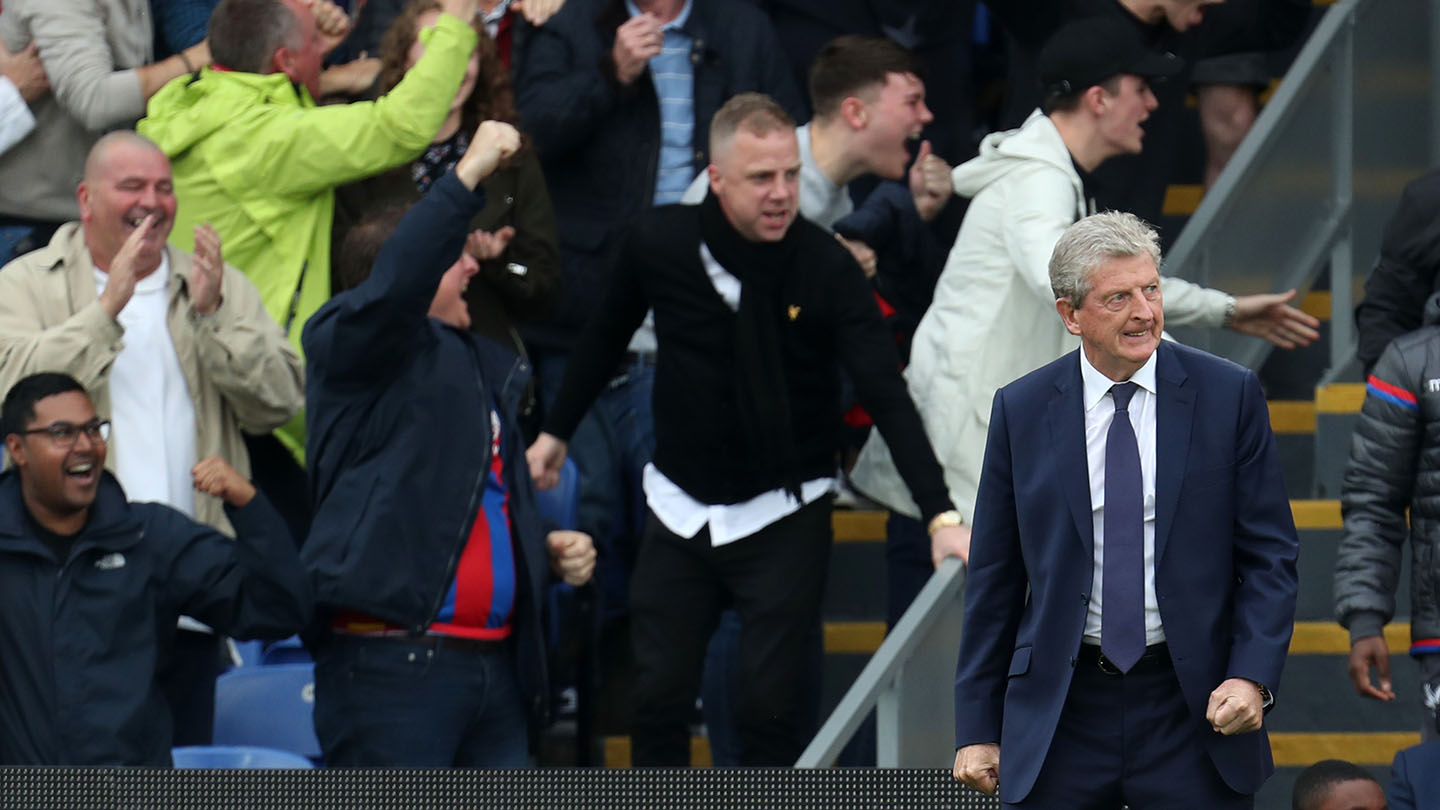 Unlike against Brighton however, there was still plenty of time to play – 79 minutes, to be exact.

“There is a feeling of relief that you’ve got one monkey off your back,” he says, “but it would have been tinged with the realisation that there was some time to go.

“We’d only played for a short period of time, so the game had barely started. But at least we had something to hold on to – albeit we didn’t hold onto it for very long.”

Despite conceding the equaliser soon after, Palace went in at the break ahead thanks to Wilfried Zaha’s smart finish.

But the motivational speeches that characterise Hollywood’s great works of sporting fiction are just that: fiction. The reality is far more technical.

“In those days, we’d only just started working with the team,” Hodgson explains. “All your messages are relatively new, and there are so many important messages you need to reinforce that you’re never short of things to say at half-time.

“We would have focused on aspects of our defending: making sure the back four didn’t drop too deep, that we got up to players on the ball and recovered our positions when we lost the ball.

“We were getting Wilf and Andros to drop in a bit deeper when we lost the ball, to stop Fabregas going deep and having the freedom of the park, and thereby preventing other players like Cabaye and [Luka] Milivojevic and [Jeffrey] Schlupp to [have to] leave important positions to pressurise the ball.

“We were working on the basis that we had done well to get ourselves in this position. Now, let’s make sure we keep sticking to our principles and our gameplan, and all the things we believe are necessary to try and keep this advantage and not let them back into the game.” 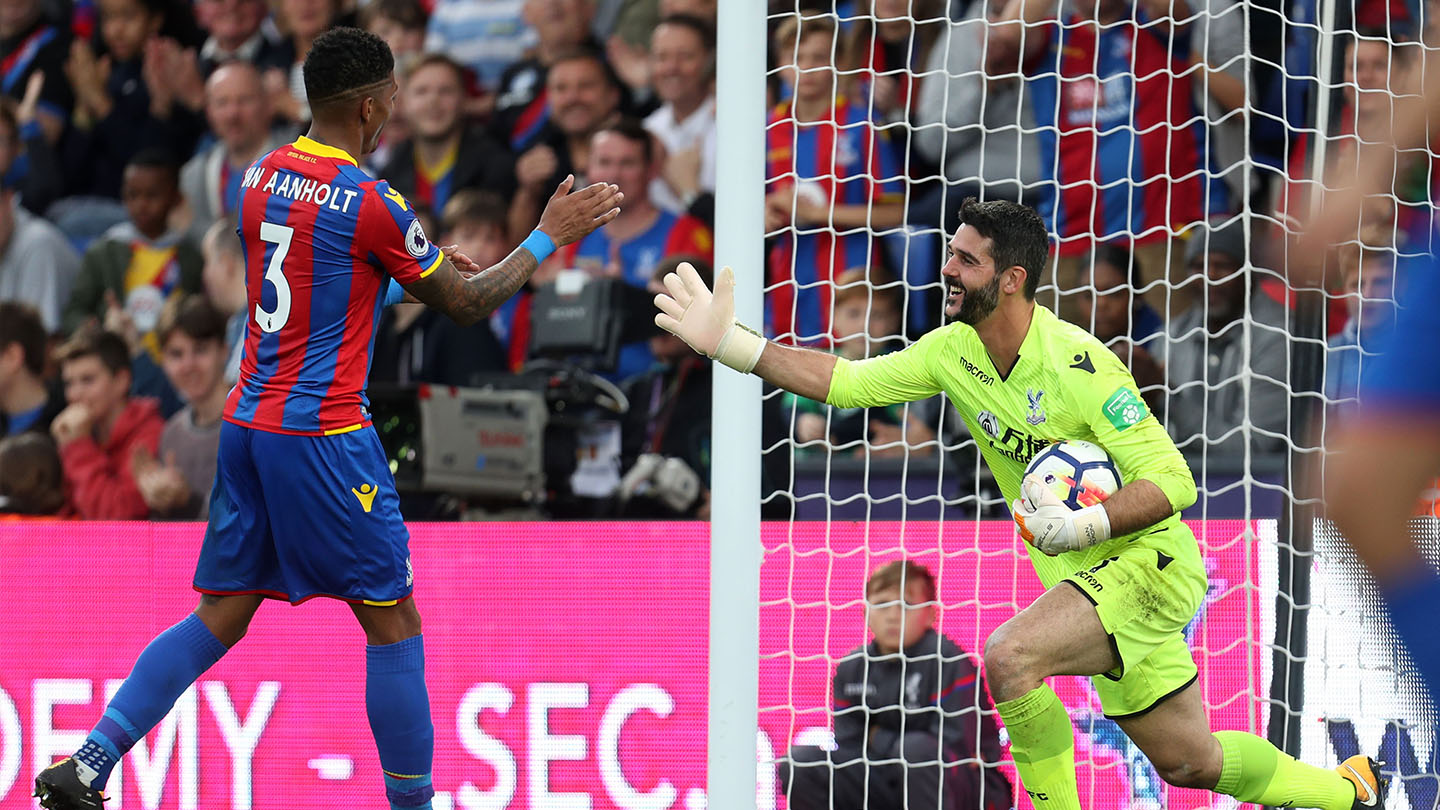 Sure enough, Palace held on for what was a crucial victory, the first of the season. It was a performance that set the tone for a remarkable recovery.

“It’s always a wonderful feeling when it pays off,” Hodgson says. “I remember when the goal went in I had that sort of feeling, and at the end of the game even more.

“We had points on the board, and we had done it against the reigning champions. We’d done it by playing our football, and not necessarily having to just barricade ourselves in front of the goal.

“That is not only satisfaction and great pleasure, it’s also relief because you know going into that game other outcomes would have been possible.”

Read Part Two of Hodgson’s masterclass HERE, in which he reveals the secrets behind wins against Manchester City – including his reaction to THAT Townsend goal – and Brighton & Hove Albion.