The iconic Holmesdale stand, which houses more than 8,500 supporters, has become synonymous with Crystal Palace FC’s Selhurst Park since it was formally opened in the summer of 1995. It was reportedly constructed for the princely sum of £6 million, but access to the uniquely curved structure has always been a head scratcher for those in charge of maintenance at Palace.

Sharon Lacey, the club’s Operations Director, is tasked with the overall maintenance of the stadium – and in recent months has devoted countless hours to the beloved Holmesdale roof to ensure it’s fit for purpose, nearly a quarter of a century since it was built.

“To our knowledge, the roof has never been cleaned since the day it was opened,” she said. “We were obviously aware of several leaks which have been a frustration for the supporters over the years, but it has taken months to arrange safe passage onto the roof to assess it’s condition, then of course give it a long overdue clean, and repair any issues with it.” 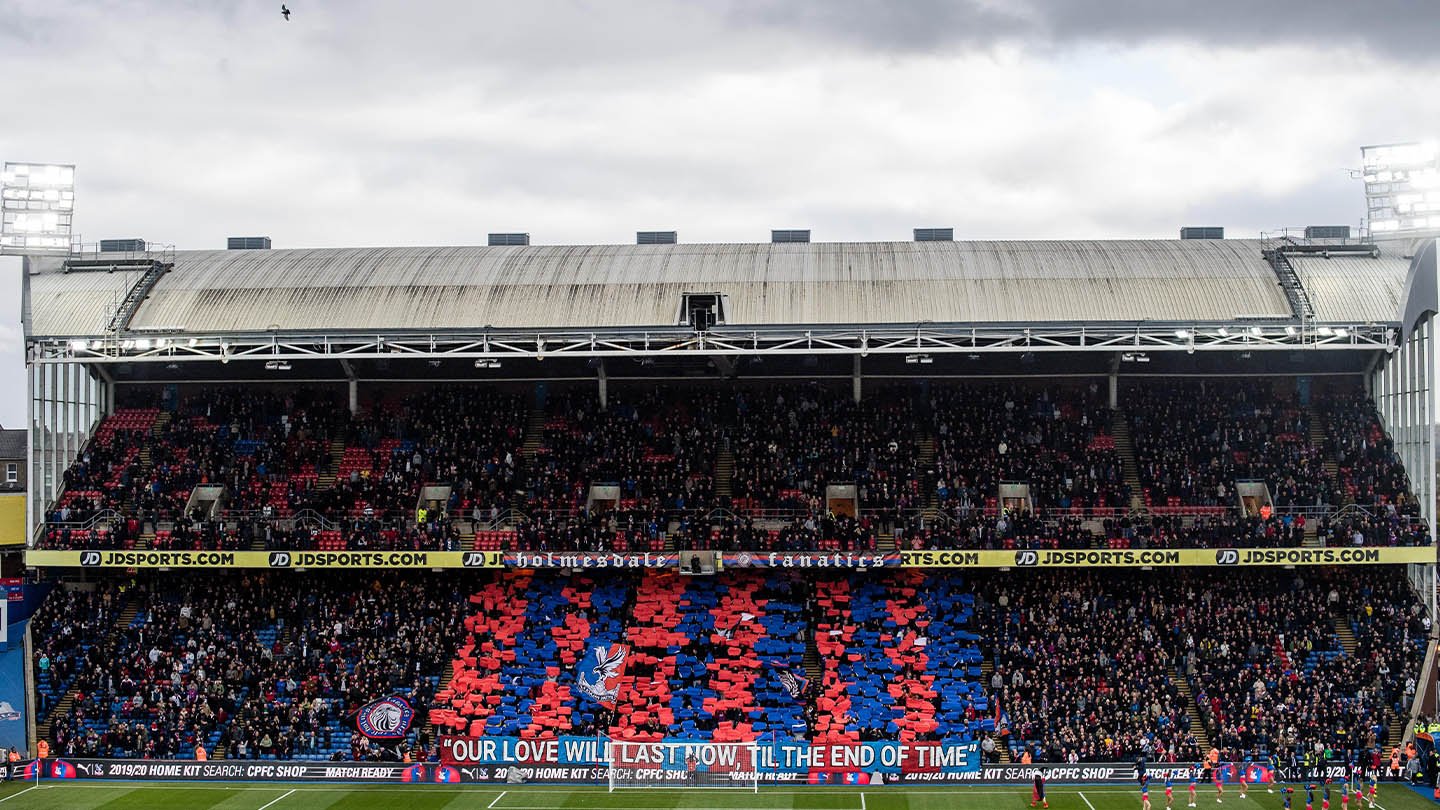 Access to the roof has been severely restricted, meaning vast internal and external scaffolding to the giant structure was needed to access it. Sharon commissioned scaffolding to be erected in late summer, and then it was a case of finding several brave souls to scale the summit, establish its condition, and crucially - build a permanent access route to enable contractors to get cracking on the project, and in the future. 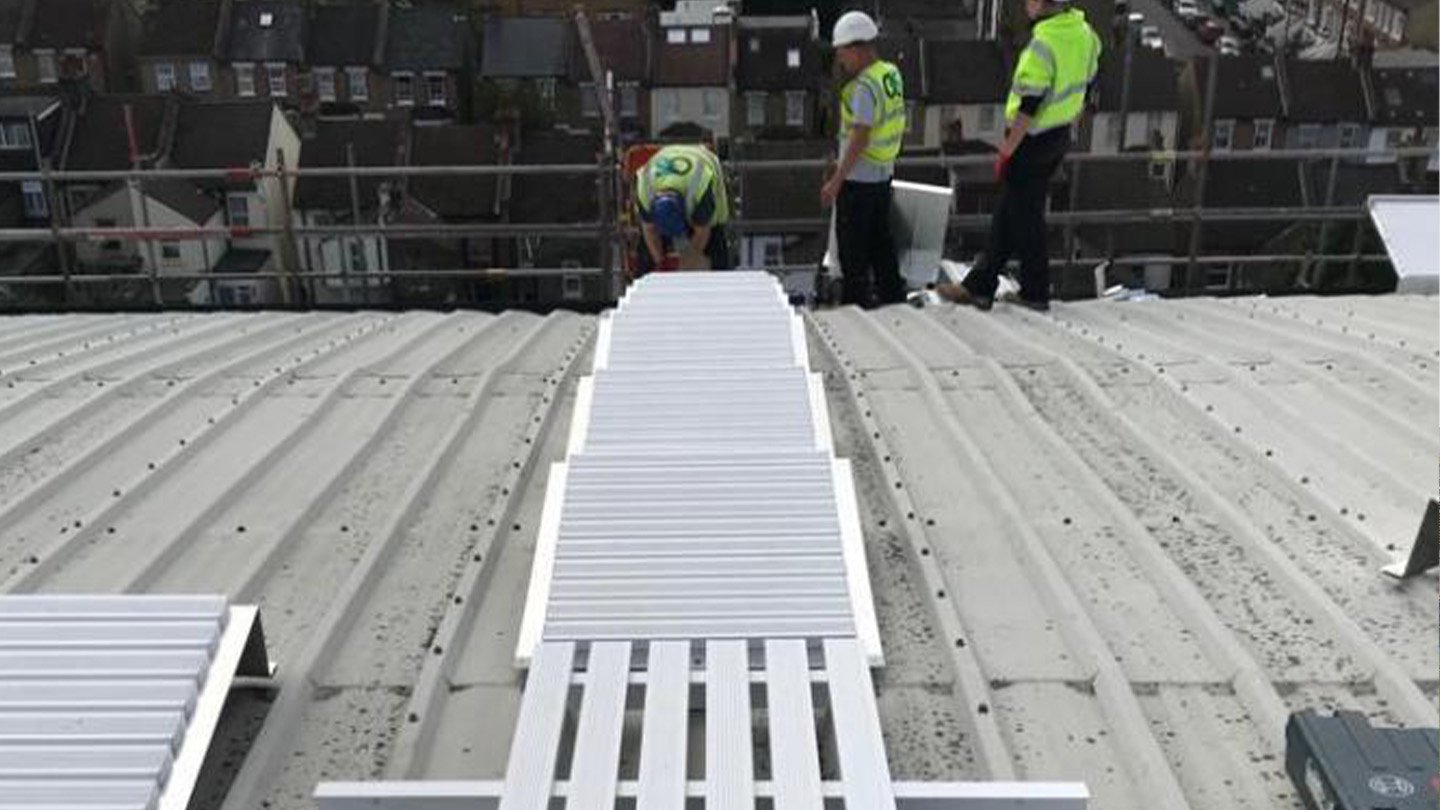 Once the walkway had been put in place, the next task was fixing the accessible cracks and holes that caused leaks over the years. Once the repairs were made, a hose was left on for three hours solid to ensure all accessible leaks were fixed. Gutters were also cleared at this stage.

Next came the deep clean.

Wayne Nyland from H20 Cleaning Service near Abergavenny, south Wales, was appointed with the daunting task of removing as much dirt as humanly possible from the roof.  Wayne and three comrades – Neil, Eric and Ashley – would clock up 200 man hours on the roof over the first week of November, with the Welshmen blessed with crisp autumnal weather in the capital to go about their business.

“The cladding was covered in 20+ years of organic bacterial growth which appear as little black dots. They look awful and are hard to get off, as they stick and multiply,” said Wayne. 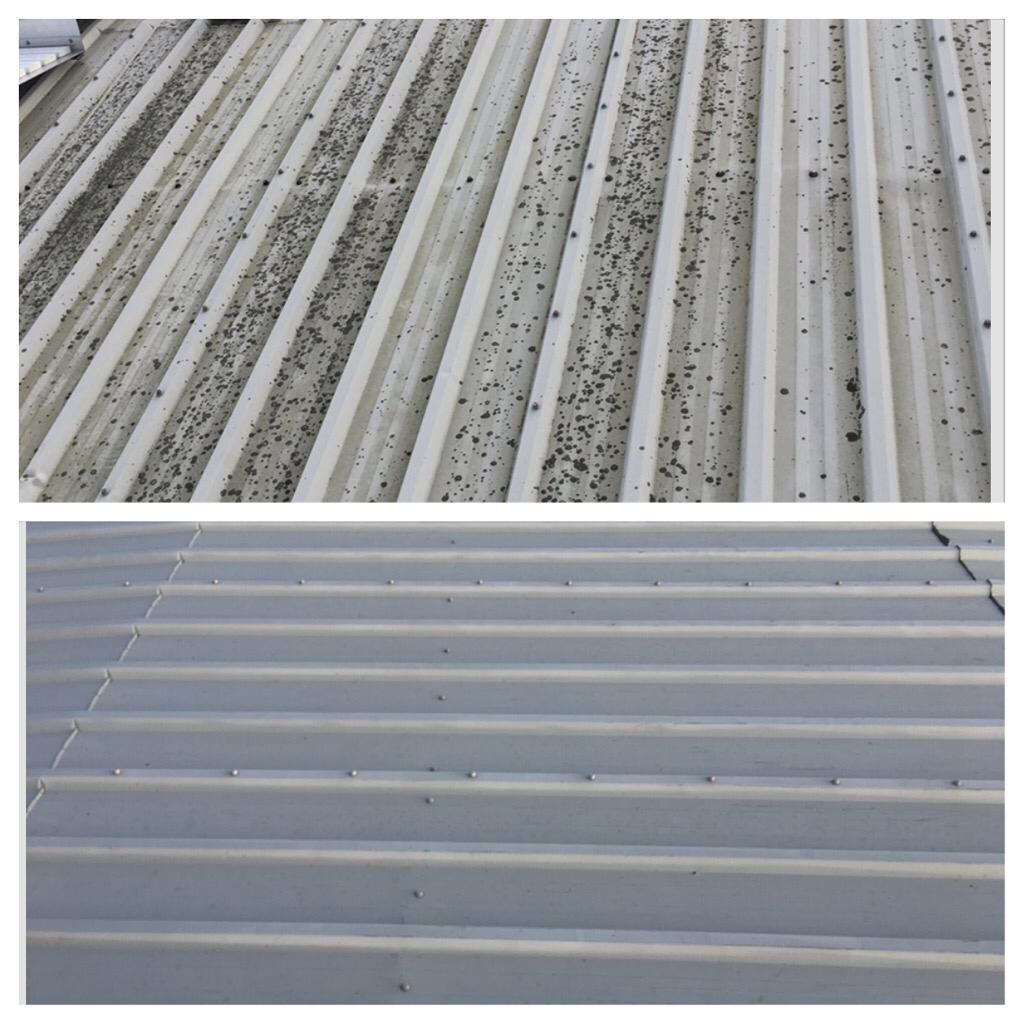 “First, we did a test patch on the portacabins which had similar grime. We removed it all using steam – 150 degree heat, and really low pressure. It literally burns it off, but in a non-aggressive way, so as to not damage the paintwork or the metal.

“The roof is about 45 metres high – so it’s high risk, dangerous work. Two of our guys specialise in rope access, and Sharon had a brand-new safety line put in along the top of the stand for us, to harness to. The guys were abseiling up and down all week long.

“We spent all week steaming – ha ha – not steaming like that, but steaming! We all worked our socks off up there. 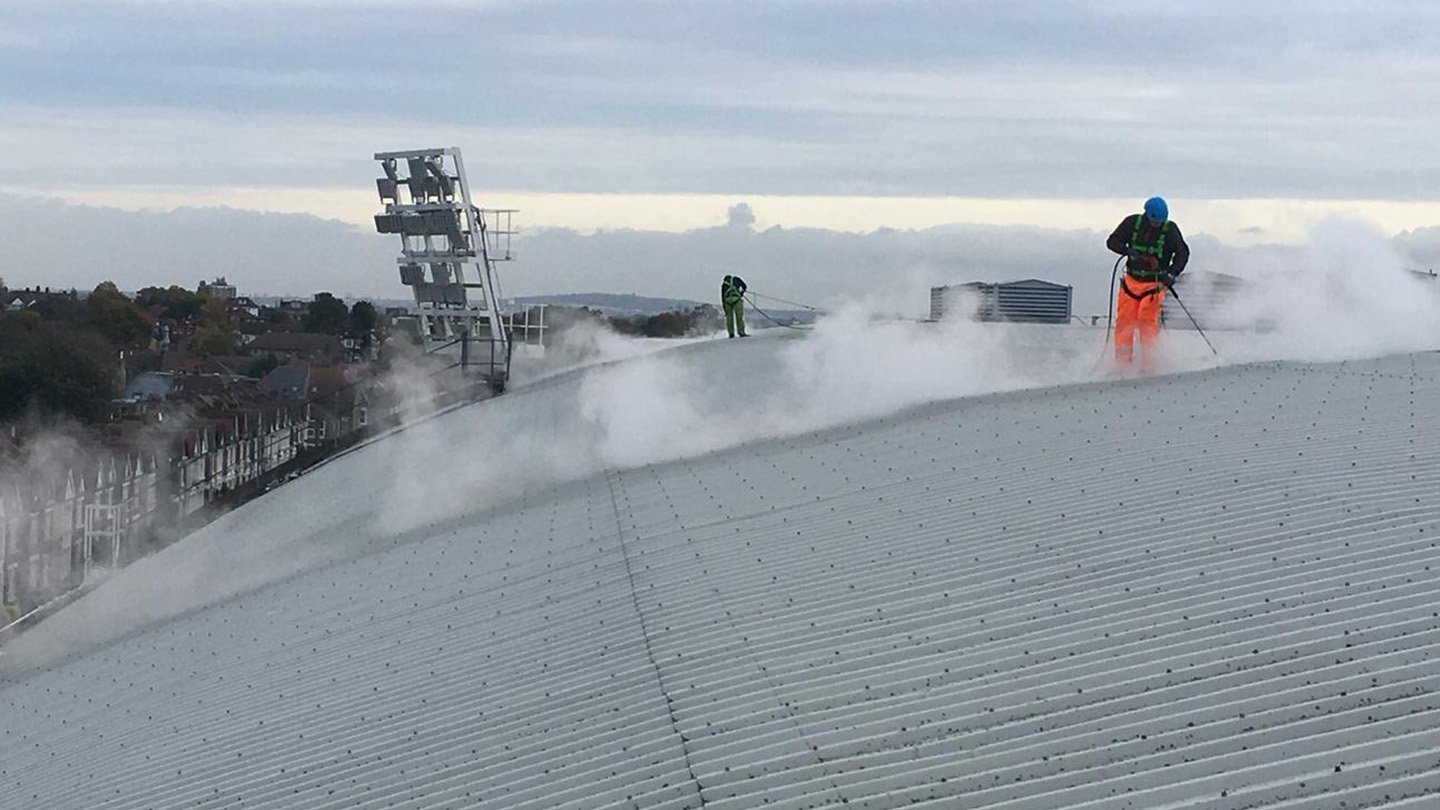 “We all had steam pressure washers on our backs (like Ghostbusters) - two lances at one end, two at the other – and we met in the middle. We covered the whole roof in anti-fungus spray too, which sprays into the steel and kills off any remaining spores.”

The biggest problem for Wayne’s team was the front of the roof, as it has such a steep curve. It was deemed too risky to rope access it, so they purchased a robotic cleaning device - ‘The Mossy’ - to “reach the bits human hands can’t!”

Watch 'The Mossy' the cleaning robot in action in the video above, as well as satisfying footage of the deep clean from the roof of the Holmesdale.

Reflecting on a week on the Holmesdale roof, Wayne said: “When you do jobs like this, you never know what the expectations are. But when we left, that roof looked brand new. It was transformed. We drove back to Wales saying it couldn’t have been a better outcome, and are really proud of it.”

To call the job a transformation is not an overstatement.

“Working for someone like Crystal Palace it gave us tingles. I would say it’s our number 1 job – it was a high-risk job, we did it on time, and the results blew me away. The positive feedback has been amazing, the whole package – it’s number 1. The best job we’ve ever done.”

Sharon also took the opportunity whilst the scaffolding was up to arrange the replacement of sixty windows in the stand. A six figure sum was invested by the club into the entire project, with Sharon saying, “We have fixed as much as possible. Some small leaks may remain in the front part of the roof – as we can only access this part of the structure in the off season, as we need a cherry picker on the pitch. But it will happen this summer.

“We continue to make a concerted effort to improve all aspects of our stadium – some will be noticeable by fans, others will not. With this project, there is such an amazing difference before and after, so I hope it raises a smile or two on matchday.”

Next on Sharon's ever expanding list is the continued revamp of the Whitehorse Lane end’s Executive Boxes, and establishing the best options for improving the matchday experience in the Arthur Wait stand, with new female toilets and a repositioned gantry being explored. 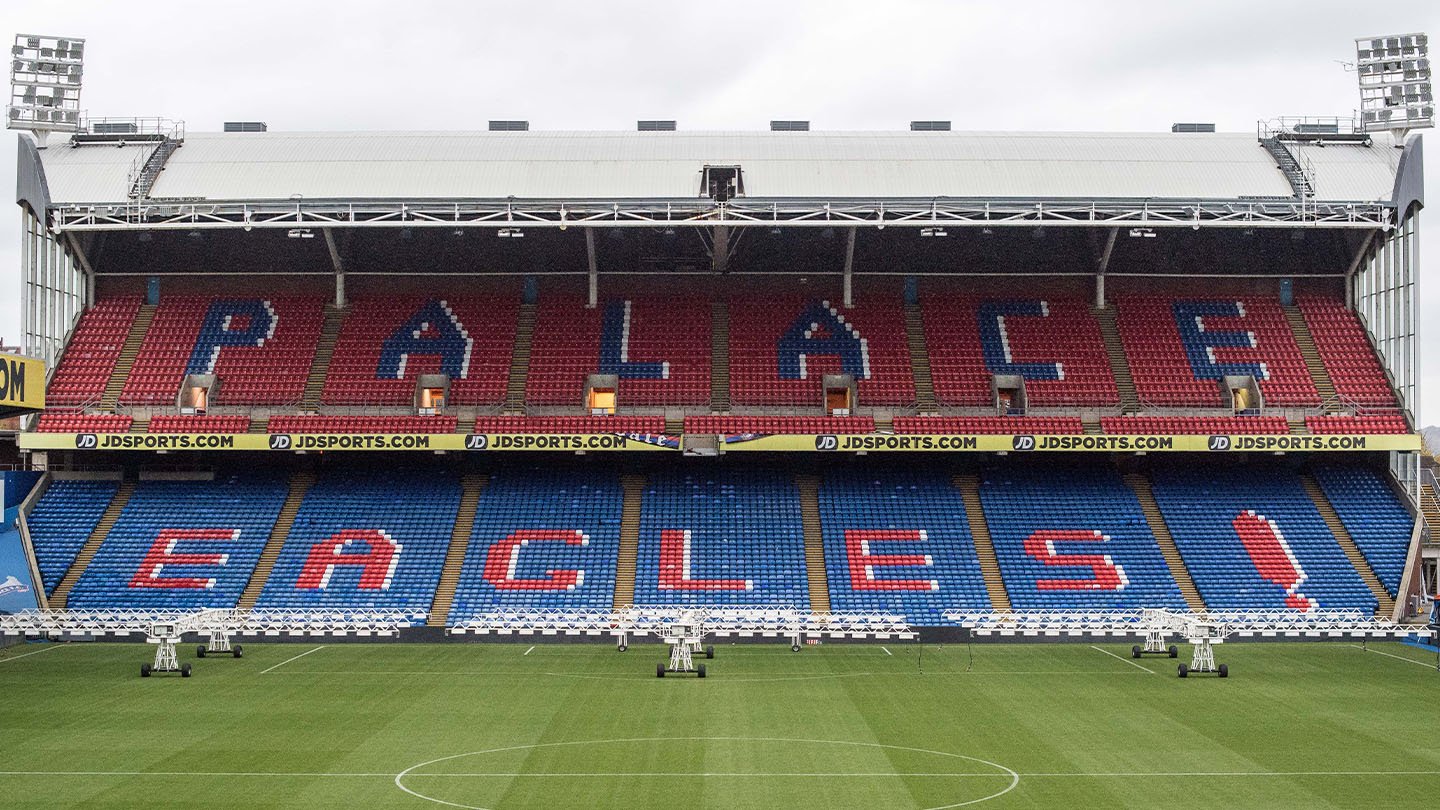