Eighty players “aged five to 65” charge across a colossal ash pitch in Castlemilk, Glasgow, as a 10-year-old Ray Houghton ducks and dances his way through a crash of football-obsessed legs.

Houghton’s mother carries a crate of 24 milk bottles filled with water, leaving them metres from her house for the hoard of aspiring footballers to refresh themselves with.

There are “no pubs” and only slightly more jobs, so the people of Castlemilk - young or old - are left with a ball at their feet and little else.

“Football was all we had,” Houghton recalls, detailing a clear childhood image almost 50 years later. “That’s all we had. It was playing football or that was it. That was it for everyone.”

The effect was clear: Castlemilk - a working-class district designed to accommodate emigrants from neighbouring former slums - proudly lays claim to a host of successful footballers, Houghton being one name amongst many.

The former Liverpool man forms part of an illustrious list too long to write out, but alongside its more recent additions sits James McCarthy: a Scottish midfielder representing Ireland internationally, who moved to south London after a lengthy spell on Merseyside. Sound familiar?

“James McCarthy’s dad,” Houghton explains, “my oldest brother John would know him. They went to school together, St Margaret Mary’s.”

Like so many other Scottish footballers, Houghton’s company and upbringing on the vast pitches of Castlemilk would shape his style and career and lead the midfielder to win the league and feature at both the 1990 and ‘94 World Cups.

Soon enough, after moving to Camden Town aged 10, Houghton was hauled into the Academy system and, after several years with West Ham, Fulham and Oxford United, one of England’s biggest clubs came calling: Liverpool.

The move was huge, and would precede the most memorable and successful period of Houghton’s career. But, looking back, the Scotsman reflects on a working life of what-ifs.

“That was my first three seasons. We could have done the double three seasons in a row and we didn’t win one. You look back and go: what if?” 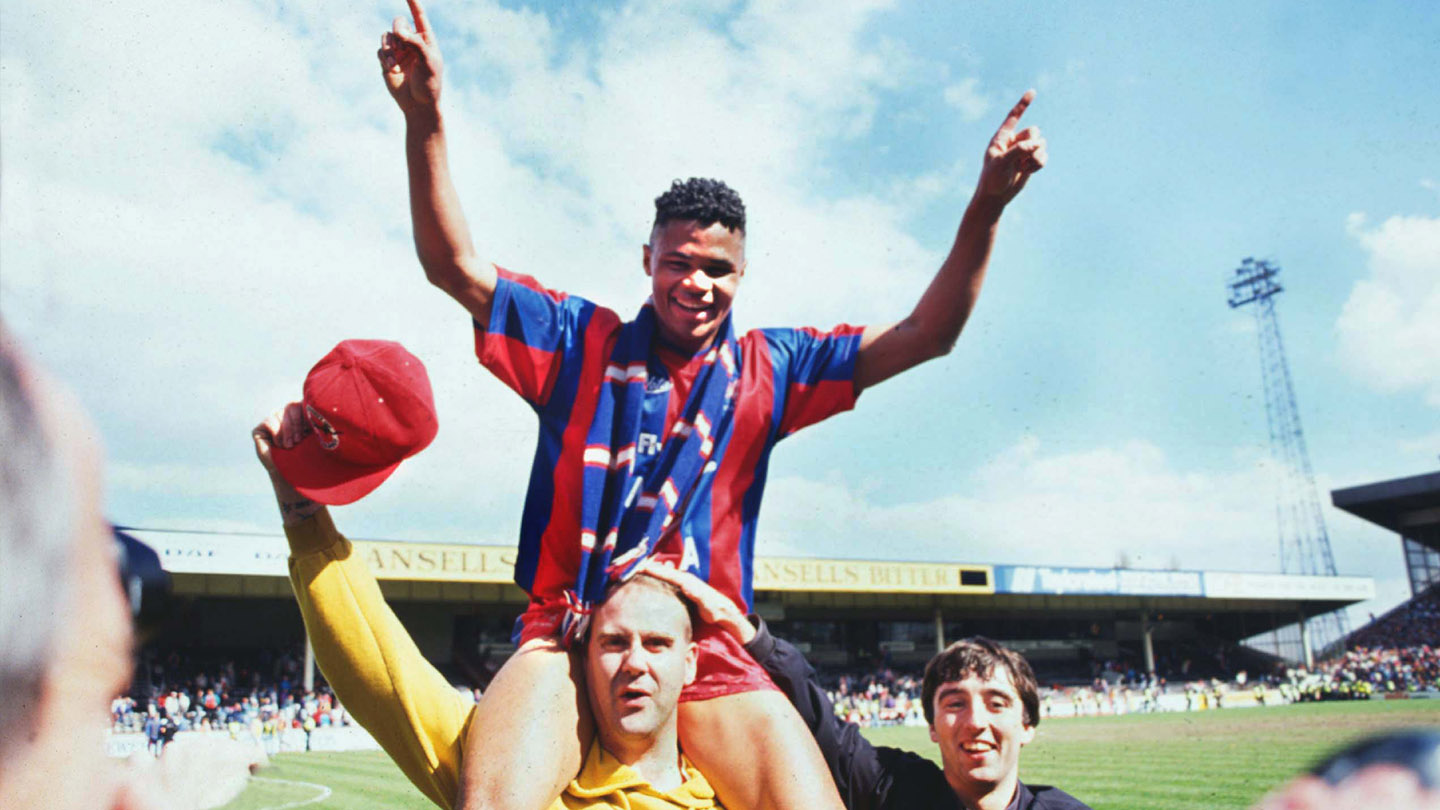 Sure enough, one of the three clubs to snatch the double from Liverpool’s jaws were Palace, when, 30 years ago today, the Eagles pulled off one of their greatest, most remarkable results ever: knocking the Reds from the FA Cup semi-final at Villa Park in 1990.

Building-up to that game, however, Palace were clear underdogs, with the south Londoners having lost 9-0 away to Liverpool just months before.

From the opposition perspective, Houghton recalls that Anfield-drubbing.

“I was sitting on the bench for the game and it was incredible,” he says. “Every time we attacked we looked like we were going to score and Palace didn’t know what they were going to do next. They were shell-shocked.”

Palace may have been the whipping boys that afternoon in 1989, but when they returned in 1990, the Eagles pulled off one of the FA Cup’s most memorable recoveries: beating Liverpool 4-3. By burying the ghosts of their recent past, Palace secured a cup final berth against Manchester United in the most emphatic of fashions.

Even from a Reds perspective, Houghton still speaks with admiration 30 years later: “Palace dug in,” he says. “They didn’t give up. I remember us being 3-2 up and then they got a late equaliser to go to 3-3 and then they obviously won it in extra time. All credit.

“We knew playing Palace that day, Palace would have been right up for it. Because they were wounded. I’ve lost 6-0 to Liverpool myself and you are wounded and you’re hurt and you’re embarrassed and you say: ‘Right, lads, we’re at it today. We’re going to give them one hell of a game,’ and Palace certainly did.”

Offering insight to the Liverpool changing room that afternoon, Houghton stresses that the Merseysiders approached the game cautiously, and that losing it left them thinking ‘what if?’ for the third season running.

“We were never overconfident that ‘because we beat them 9-0, we’re going to beat them today.’ It actually went the other way because we knew they’d be up for it.

“What can sometimes knock you backwards is we were that close to winning it, and then Palace get a late goal. So they’re really confident, their confidence has gone through the roof - a couple of minutes earlier they’re thinking they’re out of it and that’s how quickly things can change.

“In the afternoon, Oldham were playing Manchester United. That was the later game and we were thinking: ‘It could have been United. A Liverpool v United final would have been another spectacular game.’”

READ: How Houghton and Lewington shaped football’s future in 1982

Sure enough, Palace competed through a spectacular game of their own with United, and following the heartbreak of losing the resulting replay before finishing third without earning European football, the club were looking for a steadying hand when they called upon Houghton’s services in March 1995.

Though the midfielder was 33-years-old, he had scored one of Ireland’s greatest ever goals at the 1994 World Cup just a year before and was out of favour at Aston Villa, whom he joined after leaving Liverpool in ‘92. The journey from Liverpool to Palace via Villa Park seems an apt one. 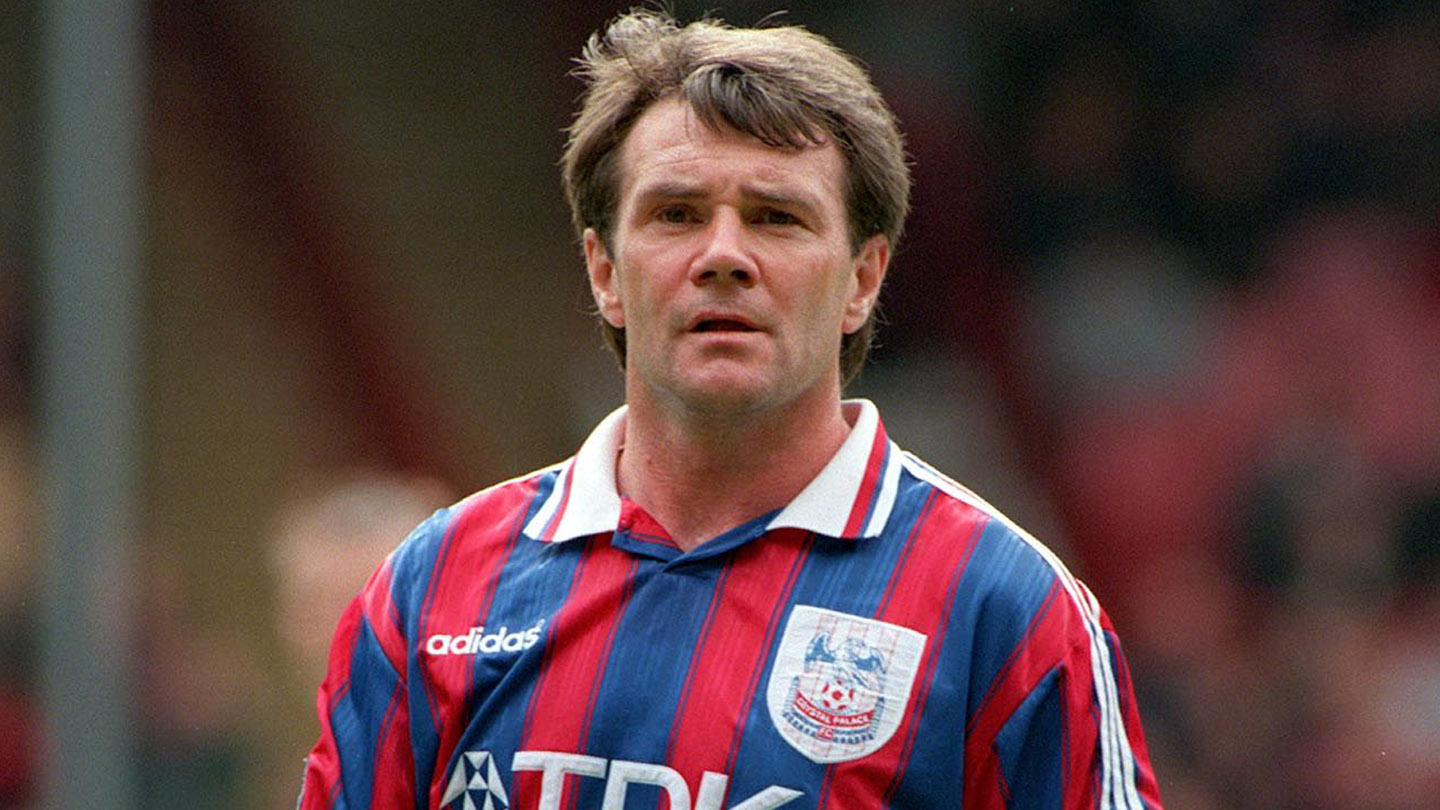 “I remember one of my first training sessions [at Palace], the lads were all looking at me as if I was going to be what I was like when I was 26/27. What I was was a 33-year-old player who still had ability but I couldn’t get about the pitch like I once did.”

Houghton’s arrival at Palace sparks a conversation inspired by former Eagle, Jason Puncheon, who told cpfc.co.uk in 2016 that he could remember watching Houghton as a child and wondering why the footballing icon wasn’t warming up with the rest of the team.

“One of my first games at Palace was West Ham. I actually got caught in a traffic jam on the M25 and I remember ringing Alan Smith saying: ‘Alan, I don’t know if I’m going to make the game - we can’t move, we’re just not moving.’ He made me laugh - because he was quite a funny character - he said: ‘Get a helicopter out!’

“I literally got to the stadium about quarter to three, I ran in and got changed, we went out and we won 1-0… The lads were out there and I was putting my kit on, trying to get instructions and calm myself down a little bit. I did alright, I think so. I think we won 1-0 and Chrissy Armstrong scored it.”

The footballer’s ability to recall scores and goalscorers is phenomenal - Houghton is spot on -  but sadly that West Ham victory would be Palace’s last of the 1994/95 season, and the club were relegated from the Premier League for the second time in three campaigns.

Houghton faced his first spell outside the top flight in over 10 years and an exodus of his surrounding teammates, but neither troubled the Scotsman. 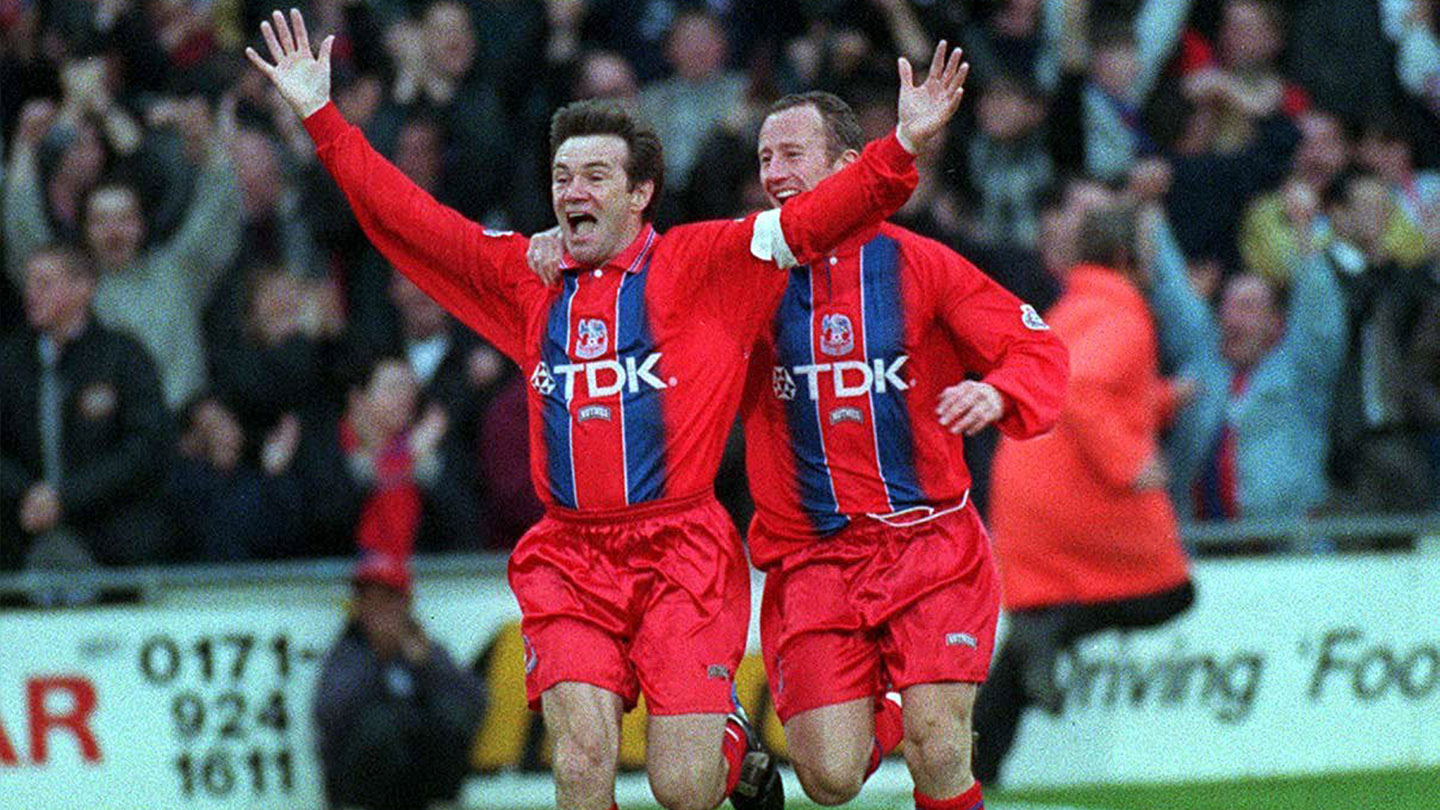 “I knew quite a few players were going to leave: Chris Coleman, [Richard] Shawsy, Gareth Southgate, because there were some good players and good individuals and they were young enough to move on.

“We had players like Dean Gordon and others coming through, they keep you alive in footballing terms. The up-and-coming youngsters - George Ndah came through, Bruce Dyer, I remember Bruce when he came from Watford - they’re the lads that keep you going.

“They’re the future and they’re the ones that have the energy. You think: ‘Yeah, I like the look of this and think we can do well.’ I remember going away for pre-season with Dave Bassett and having a chat with Dave and he was very good.

Houghton, like every Palace fan, refers to the play-off final loss against Leicester as “[Steve] Claridge’s shinner” and the play-off final win against Sheffield United as “a great way to go up.” Clearly, the pair of Wembley run-outs endeared Palace to Houghton, and the former international made a return to SE25 as first-team coach in 2000. 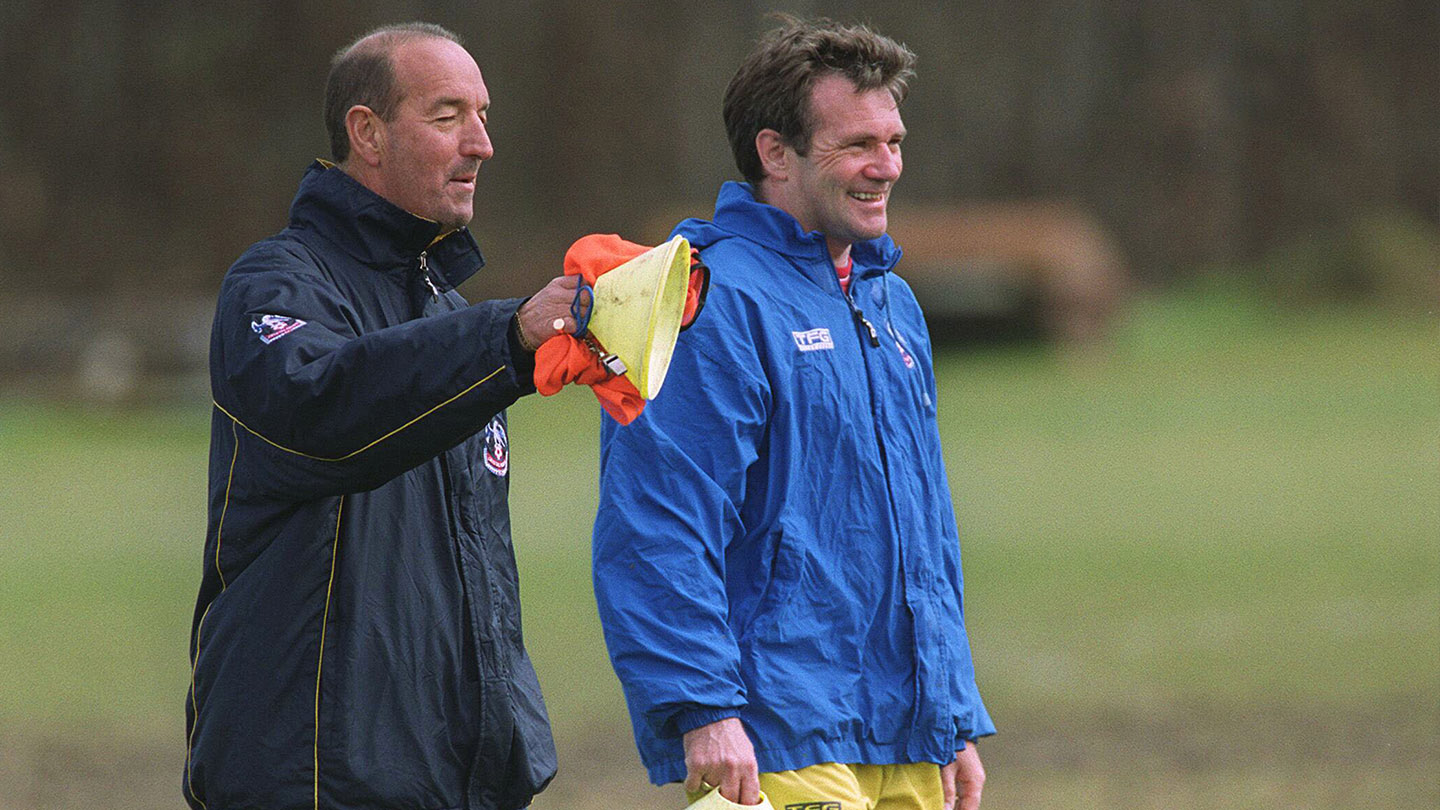 “It was really tough,” he explains, “because if you remember that winter, it was so bad we couldn’t train outdoors. Everything was in the gym. When you’ve only got a small gymnasium and can only do six-a-sides, you can’t do any team building or structural work.

“Bear in mind we’d also brought in Julian Gray and Tommy Black, they’d come from Arsenal. They were used to different styles of things, they weren’t used to what comes with being a Championship player. From that point of view, it was tough.

“Do I regret not going into management? Absolutely. I think we’ve all got egos, we all think we can do it and I certainly think it’s an avenue I should have explored more. It’s another ‘what if?’ I keep saying to you: ‘What if, what if, what if?’ I didn’t explore it for long enough and that’s my own fault, I’ve got no one to blame but myself.” 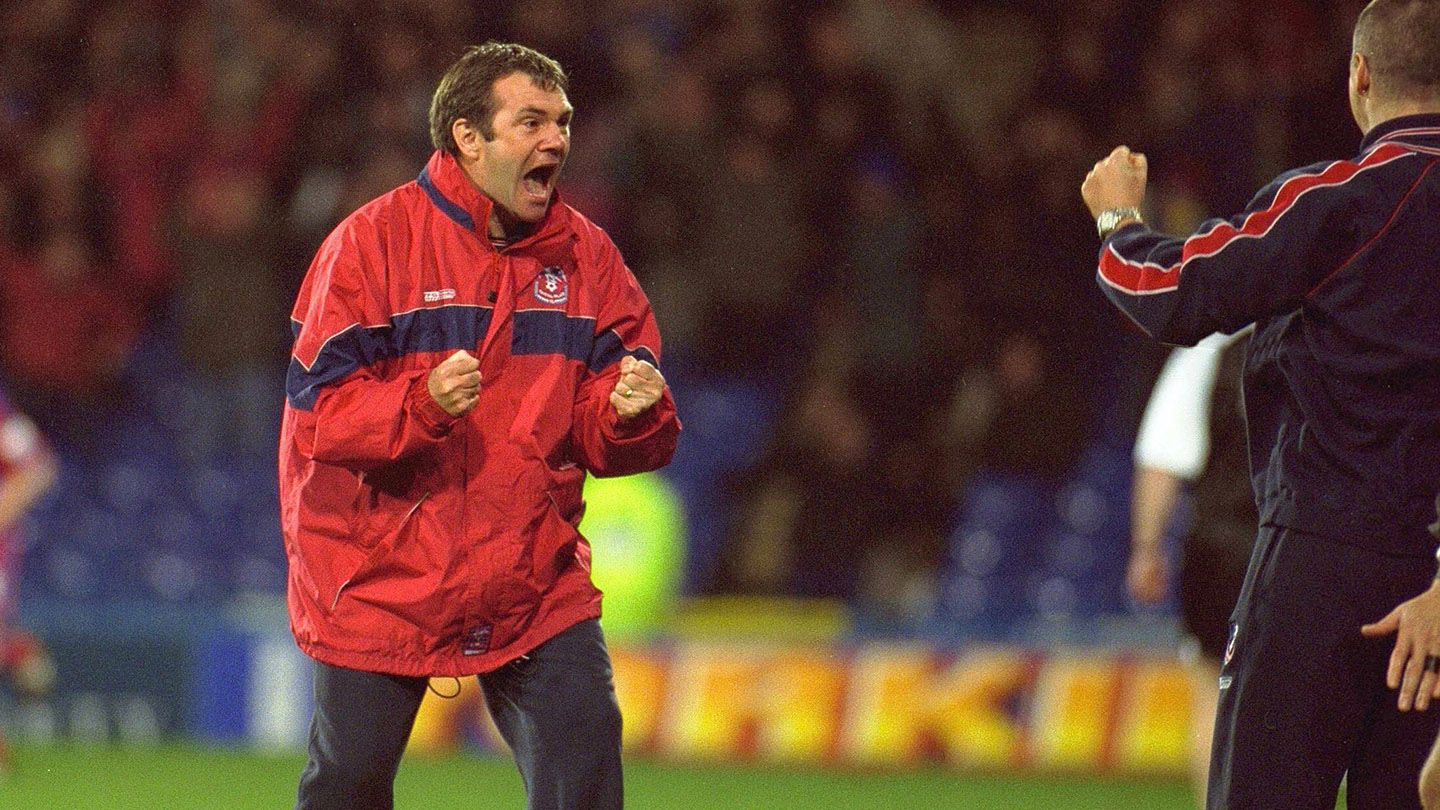 But there’s a flipside to Houghton’s reflections, and the 58-year-old certainly isn’t remorseful or embittered at any stage throughout a lengthy interview. What if he’d grown up away from Castlemilk, where jobs and other distractions might have culled the wealth of emerging Glaswegian footballers?

What if Liverpool hadn’t procured the Scotsman’s services, and he hadn’t earned two league winner’s medals and two FA Cups?

And what if Houghton hadn’t moved to south London in ’95, adding his iconic name to the list of greats who’ve played in the red and blue?

What if? An FA Cup final and a legend amongst our ranks. We’re happy with the way things went.