How Gallagher and Guéhi grew from Academy teammates to England seniors

Conor Gallagher and Marc Guéhi will both be part of the latest England senior squad, completing a remarkable journey for the duo from childhood friends to international teammates.

After coming through the Academy system at Chelsea together, the pair have been inseparable both off the pitch and on it, with their career paths taking remarkably similar turns.

Guéhi often captained Chelsea through the age groups; Gallagher remembers him leading the youth side out ‘many times’.

“Marc you can tell is going to be a captain in his career because of the way he is on and off the pitch,” the midfielder said recently. 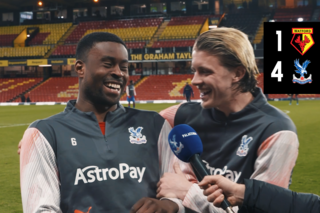 Meanwhile an international career was blossoming at youth level. Both travelled to the Under-17s World Cup with England, playing a huge part in the triumph of the Young Lions over Spain in the final.

As Guéhi moved to south Wales to play for Swansea City on loan, so did Gallagher, the two combining to reach the Championship play-offs before losing out to Brentford in the semi-finals.

While Guéhi stayed at Swansea and Gallagher had a loan spell with West Bromwich Albion, the pair reunited at Crystal Palace over summer as two crucial parts of the new Patrick Vieira era.

“It seems like we can’t leave each other alone!” Gallagher laughed after signing. “We grew up through the Academy at Chelsea, we were at Swansea together and now here, so we’re best mates. I’m really happy he’s here.”

Since arriving, both have made themselves mainstays of the Eagles’ starting XI. Gallagher’s fine form – having contributed eight goals and five assists so far – earned him senior England recognition in November, and a first cap was secured against San Marino in a 10-0 drubbing.

Meanwhile, Guéhi was making his mark on the Under-21s side, being named permanent captain by new boss Lee Carsley.

“I’ve known [Marc] for two or three years, and straight away I was impressed by how mature he is,” Carsley said of his decision. “The way he talks about the game, the way he influences players off the pitch.

“The example he sets off the pitch as well as on it made it an easy choice.”

Those leadership skills did not go unseen by Patrick Vieira, who soon made Guéhi his on-field captain in the absence of some senior players.

“It was massive moment,” Guéhi said after captaining the side for the first time against Watford – a game Palace won convincingly.

“It was not something I was expecting… it’s a huge honour to be captain at this club. To have the backing of the manager and the players is fantastic.”

Gallagher, giggling alongside him throughout the interview, composed himself enough to echo that sentiment. “When I found out he was captain tonight I was really proud and happy for him. I know it will mean a lot to him and his family, and he deserves it because it’s been fantastic so far.”

Joined at the hip through Academy football, loans, youth internationals and now at Crystal Palace, the pair will join forces once more with the senior England side as they take on Switzerland and Côte d’Ivoire at Wembley next week.

It is just the latest step in their remarkable journey, and there is still a long way to go yet.