How do you renovate Selhurst Park under COVID-19 restrictions?

Any local fans getting their Crystal Palace fix by taking a walk past Selhurst Park on their designated daily exercise may well have noticed activity at the home of the Eagles – albeit in a much-reduced capacity.

With the current Premier League season on pause and the start of the 2020/21 campaign potentially not allowing enough time between the two seasons for the regular pitch renovations that typically commence during the summer, a reduced grounds staff has been working on the pitch at Selhurst Park, as well as the first-team Training Ground and Academy during lockdown.

We caught up with Bruce Elliot, who has been Head of Ground and Estates since July 2015, to find out more about the process that gives fans that tingling sensation when they first lock eyes on the hallowed Selhurst Park turf. 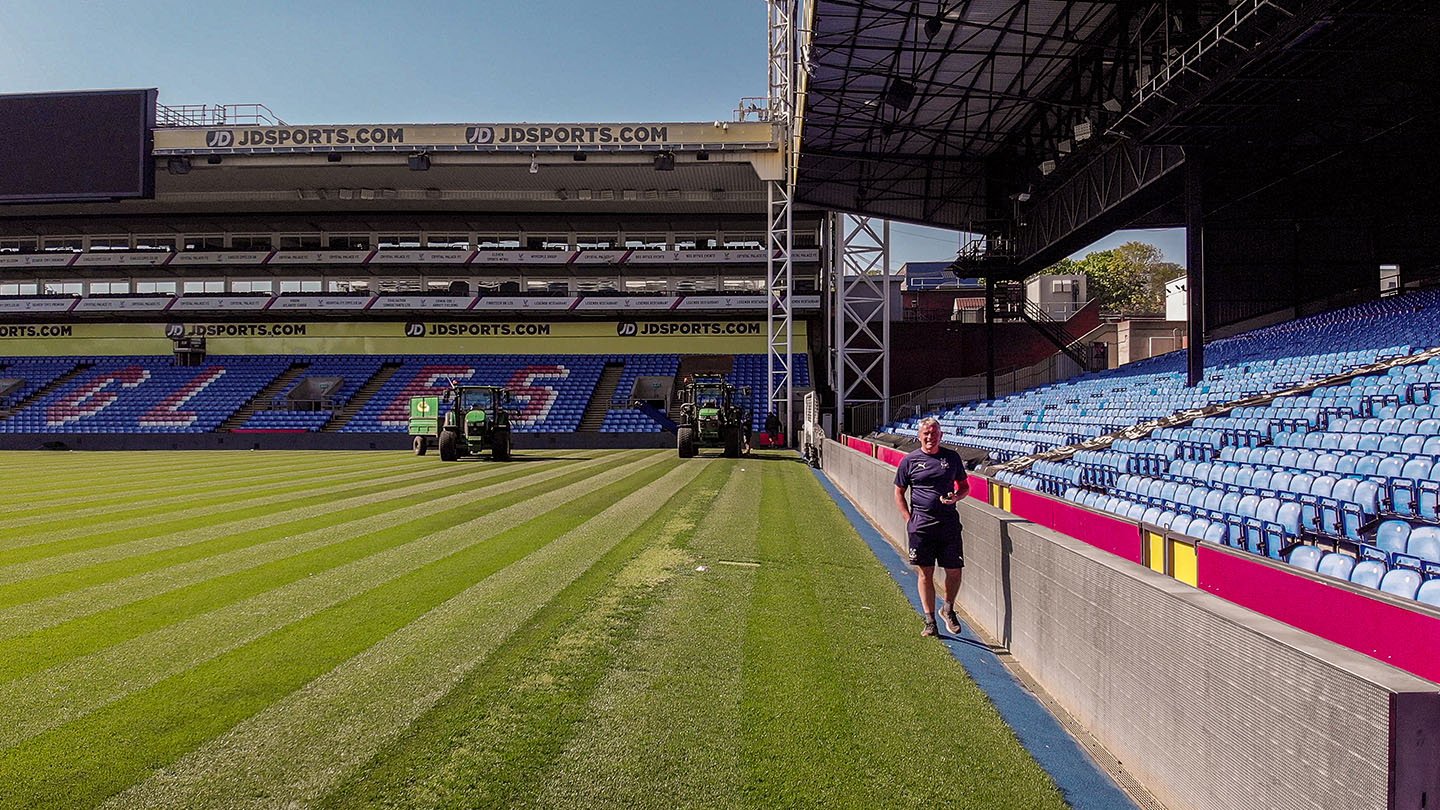 Why are we renovating pitches now?

We would normally look to renovate an area at the main Training Ground during late April, to ensure that we had an established area for the team to return to for pre-season in July. Other areas, including the stadium, would be renovated once the season finishes.

As this is an unprecedented period of inactivity, the decision was made to renovate the stadium pitch and two areas at the Training Ground, as it was felt there may not be another opportunity to carry out the operations at a later date.

We have retained some of our grass areas at the Training Ground for when players eventually return to recommence the season, whilst the other pitches are growing-in. 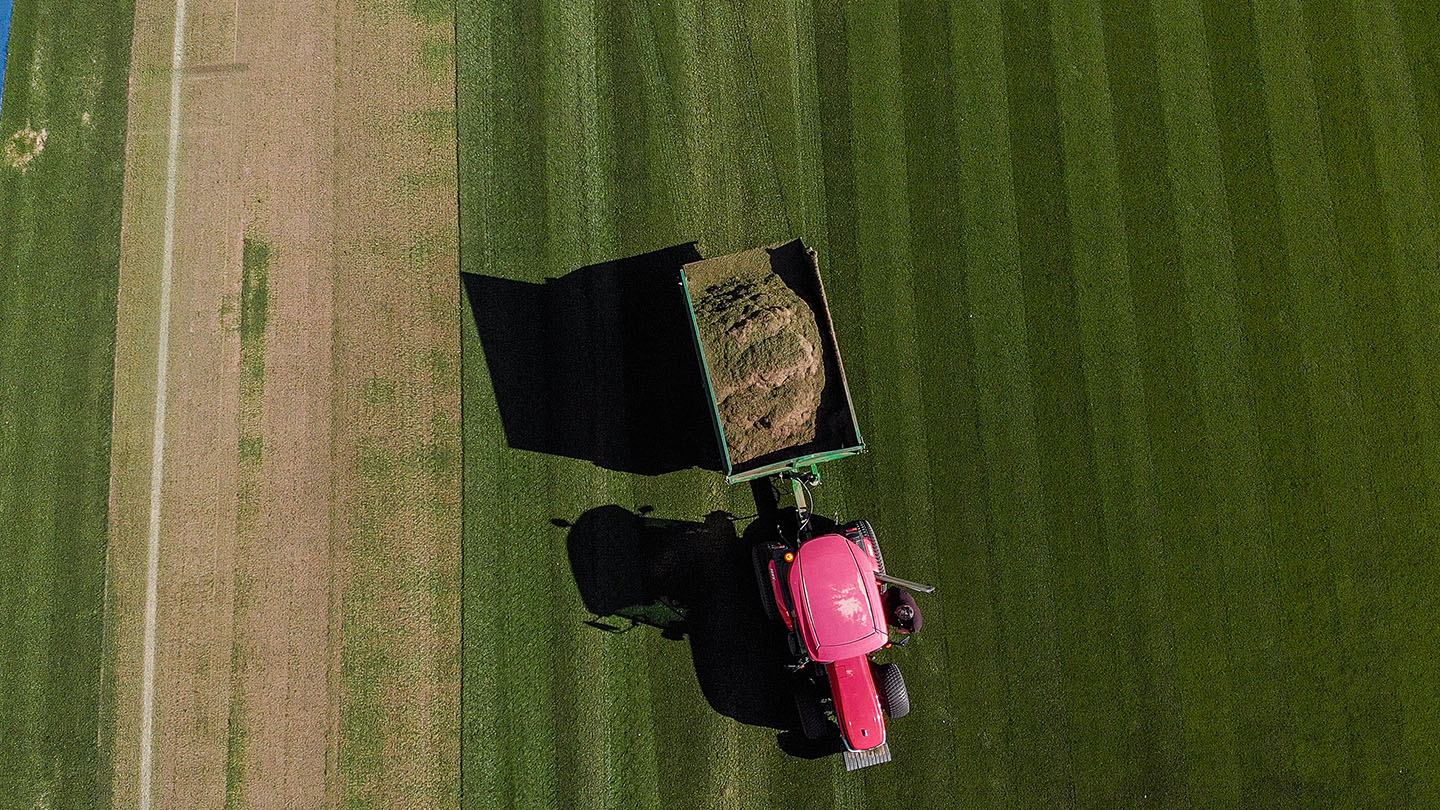 Why do we need to renovate pitches each season?

Every season we look to remove all of the vegetation at Selhurst Park and Training Ground and start from scratch again.

One of the main reasons we renovate is to remove the accumulation of any organic matter at the surface along with undesirable weed grasses.

The organic matter is a build-up of fine particles, dead leaf litter and debris. This organic layer can severely impede the movement of moisture through the surface and clog airspaces within the root-zone. It can also lead to the surface becoming slippery and create some instability when players are running on it. 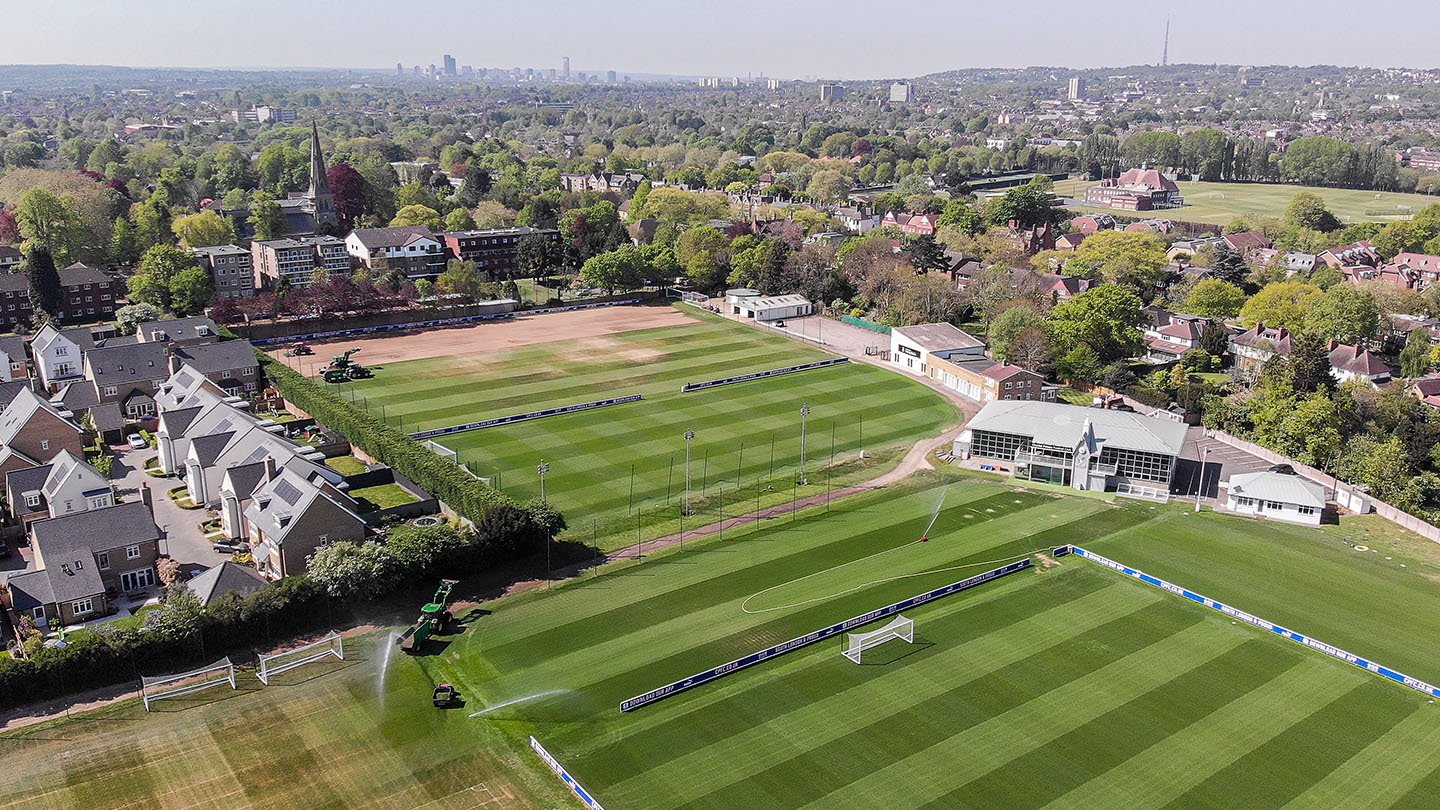 Additionally, we remove any undesirable weed grasses, as not only are these unsightly, they are also shallower rooting which can lead to an increase in divots and an uneven surface.

We would also top-dress each year with sand. This will help dilute any remaining fine particles and will also take out any imperfections in the surface, helping provide a smooth platform for the ball to roll across.

One operation we constantly carry out is aeration, and we increase this during the renovation period. This will increase pore spaces within the root-zone, increase the movement of moisture and de-compact the surface to make it softer for use by players and hopefully reduce the risk of injury. 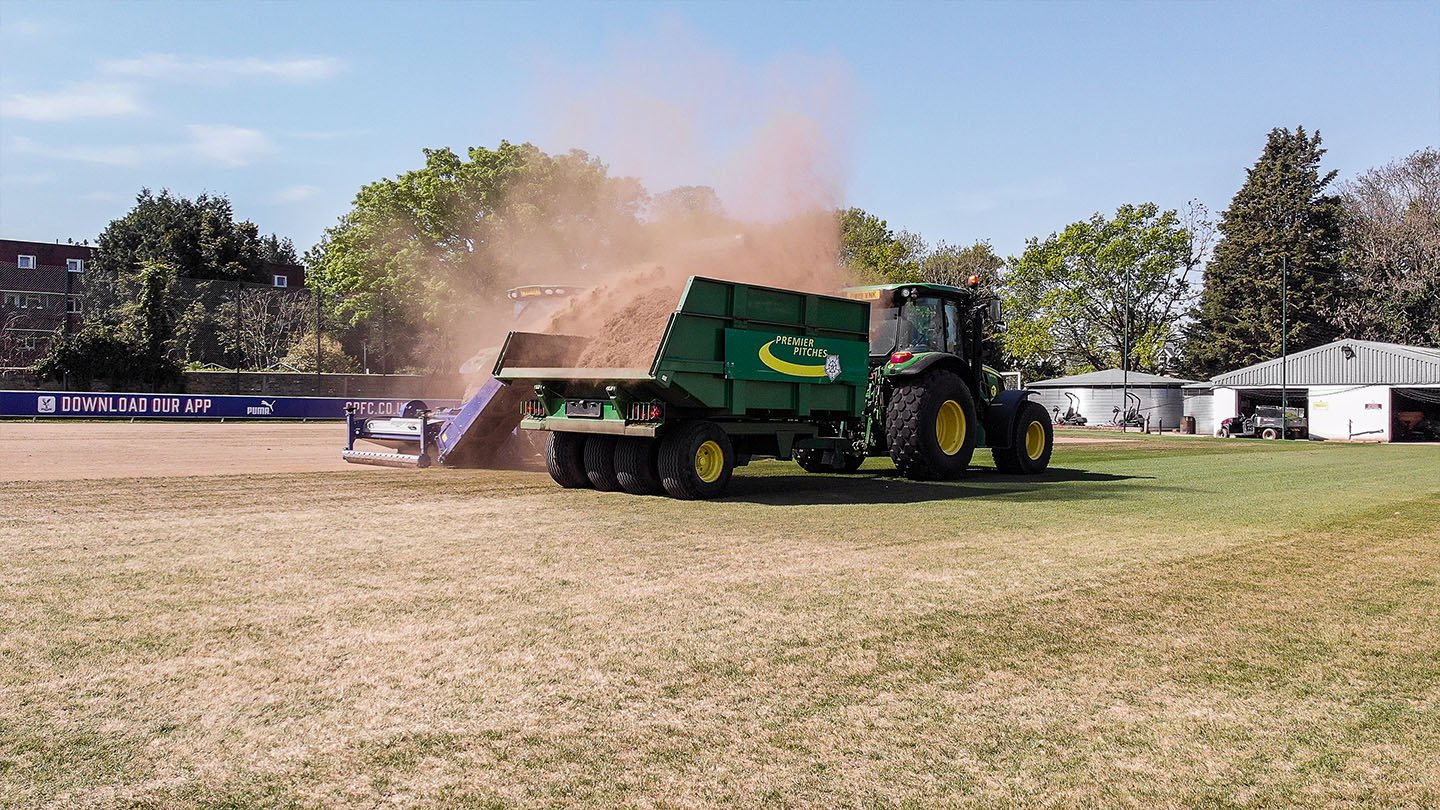 Selhurst Park is a stitched hybrid re-enforced pitch from Desso Grassmaster. This consists of artificial fibre wrapped over on itself and stitched 200mm into the root-zone, spaced at every 20mm with approximately 20 million fibres in total across the surface.

The main Training Ground consists of three pitches and training areas. These are all constructed from fibre-sand which is another type of re-enforcement system. This involves millions of hair-like artificial fibres being incorporated into the top 100mm of the root-zone.

The Academy currently consists of five indigenous clay root-zone pitches that are reliant on travelling sprinklers for irrigation.

Once the new Academy development is underway, it will provide fully constructed sand-based pitches with various forms of hybrid re-enforcement systems, with a stitched ‘show’ pitch with under soil-heating. There will also be two full-size artificial surfaces, one covered by a dome. 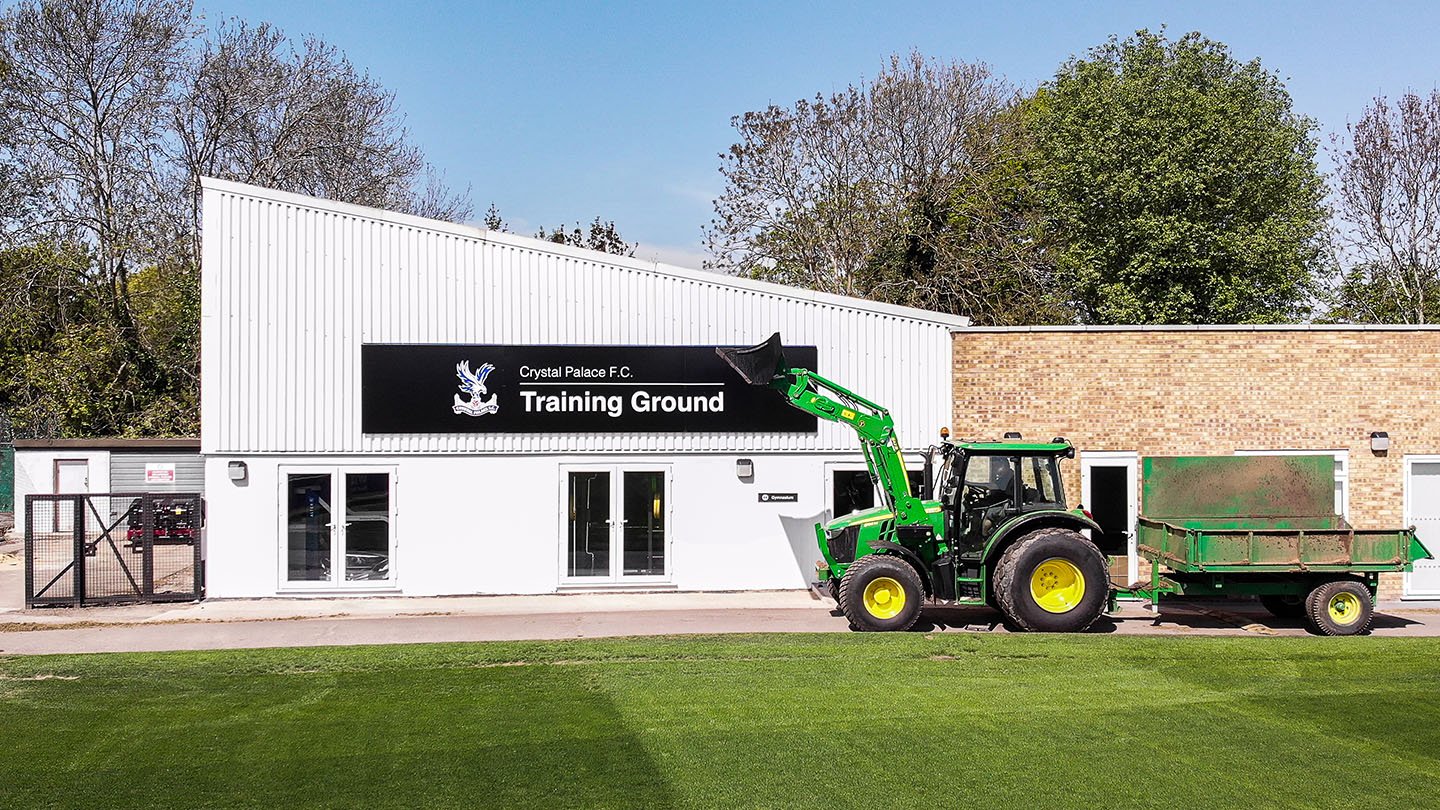 Working under the restrictions of COVID-19

Unfortunately, as we are dealing with a live growing plant and to ensure that pitches are suitable for when players return, we have still had to carry out certain essential operations so that we can maintain the surfaces to a certain standard.

To ensure this is being done as safely as possible, we have reduced the number of staff for each day, as well reducing the amount of days that staff are in so that we are only doing the bare essentials to maintain all of the grass areas.

As we get closer to players returning for training, we will gradually increase the number of staff and days so that sites are ready for use when needed.

Watch the video below to fully appreciate the process and effort that Bruce and his team of eight have gone through.

Roll out the green carpet.