It’s 18th April, 1962, and rain hammers down under Selhurst Park’s newly installed floodlights. Illuminated by the fresh, electric glare buzzing over a heavy, near-saturated and typically muddy 1960s pitch is a footballer whose name has remained synonymous with the sport over half a century later.

In a stadium of 25,000, a single diminutive figure wouldn’t typically stand out. But as Ferenc Puskas’ stubby metal studs made their maiden voyage into the viscous south London turf, the squat Hungarian had all eyes on him.

Real Madrid had come to Selhurst Park as arguably the club’s most eminent opponent in history and with them came the 20th Century’s highest-scoring footballer.

In light of Andros Townsend’s recent nomination for the Puskas Award 2019, we’ve taken a look back at the Eagles’ iconic clash with the Spanish giants.

As the country changed with the cultural revolution and economic recovery of post-war Britain, so too did Crystal Palace. Society shifted towards more aspirational focuses and the club, in part, reflected this.

For the Eagles, the arrival of the 1960s would mark a pivotal time as the ambitious Arthur Wait took over as chairman - eager to reflect the opulence of the epoch in the fortunes of his boyhood club.

Entering the decade as a mid-table Division Four side, the Eagles would ultimately finish the ‘60s by rising into the top tier of English football for the first time in history, earning promotion three times in nine seasons.

But success in the table wasn’t the only marker of growth for Palace and developments to both Selhurst Park and their lately plateaued playing style would also follow. 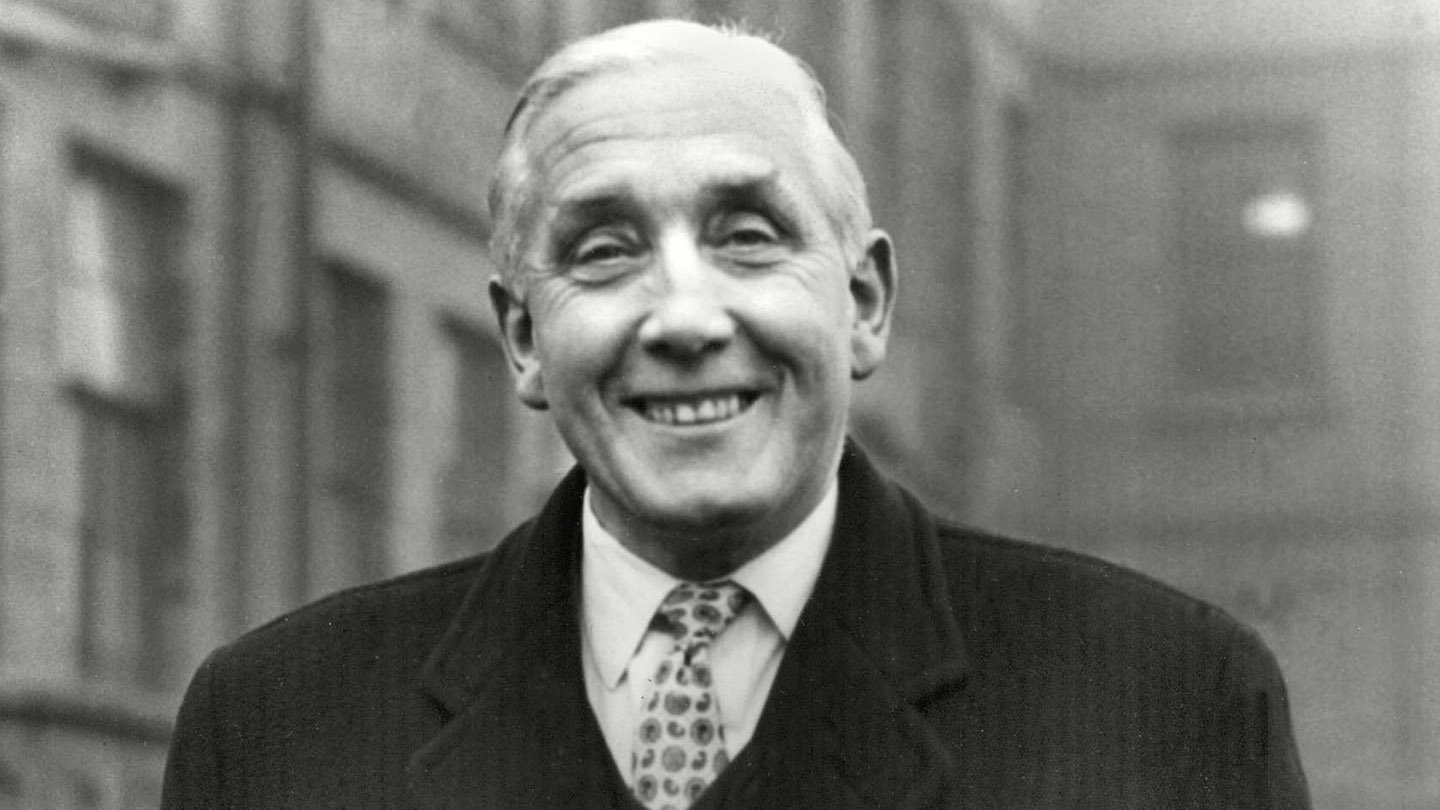 Leading the changes on the pitch and kickstarting this transitional period was Arthur Rowe, two-time Palace manager, who took charge of 139 matches for the Eagles either side of a Dick Graham stint.

Rowe joined the south Londoners having enjoyed a respectable career with Tottenham Hotspur that saw him earn a single cap for England against France and, with a First Division title to his name, the then-51-year-old brought a higher calibre of leadership to SE25.

With the new ambition, increased financial backing and instalment of a distinguished manager, Palace sought a suitably sizeable opponent to open their newly installed floodlights in 1962. It was a chance to draw a sizeable crowd at Selhurst Park, to place a lowly Third Division club on the global map and to test the Eagles against the world’s best, something they would be doing regularly less than 10 years later in the First Division.

The introduction of floodlights - mundane as it may seem today - was a significant event in English football and clubs were keen to celebrate in style as they modernised their grounds with ever-increasing popularity.

In fact, friendlies played in floodlit conditions were the driving factor behind the FA’s decision to allow their use in competitive clashes.

Clubs, of course, could play under lights should they host an exhibition match and floodlit friendlies became popular occasions. A series of eye-catching fixtures stand out from the time, with Sunderland, for example, playing RC Paris in the French capital and South Liverpool facing a ‘Nigerian XI’.

Not wanting to seem obstinate, after several years the FA allowed the use of floodlights in competitive matches from the 1950s onward. 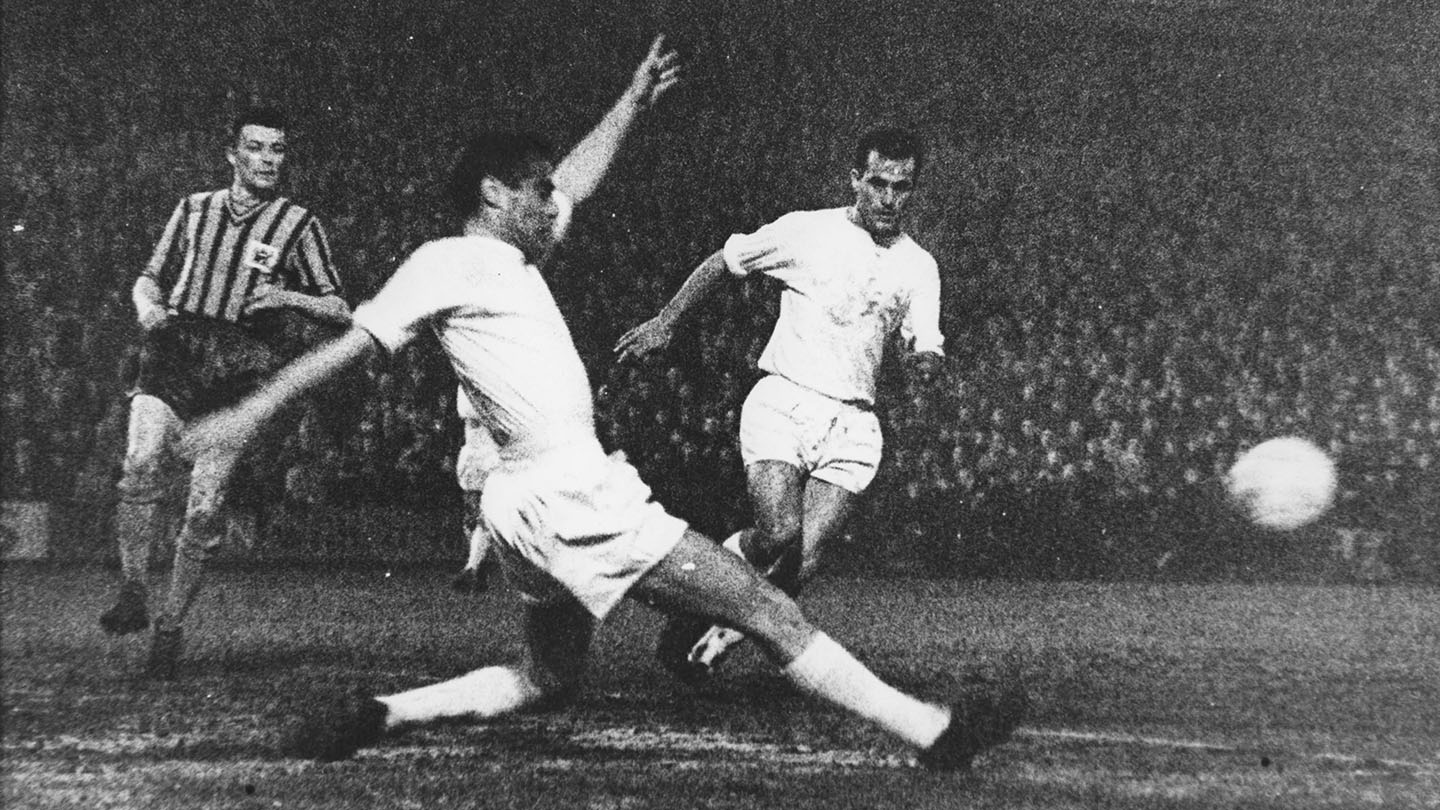 Having hastily erected their own floodlights shortly afterwards in 1953, Palace were in need of updating the technology less than a decade later and so replaced the haphazard equipment with a more sophisticated set-up in ‘62. Perhaps a little delayed in following the trend, the Eagles would have to provide bold opposition if their own headline clash under new lights was to be noticed by the wider footballing circle.

Palace’s choices were plentiful, with northern powerhouses like Manchester United, Burnley and, slightly further south, Wolverhampton Wanderers dominating the league’s top spots. Other clubs included Liverpool, gearing-up to claim the 1963-64 and 1965-66 titles, and Preston North End, made titans by the great - though recently retired - Tom Finney.

But the best opponents in English football knew their worth and even with a renewed zest for commercial opportunity, Palace were unable to afford the fees commanded by friendlies with such sides. Exasperated by the sum demanded by teams within his own country, chairman Wait reportedly exclaimed: "If that's what they’re going to do to us, we might as well try to get Real Madrid!”. Clearly oblivious to the natural irony, he accordingly did so.

Wait was a fundamental figure in persuading the Spanish giants over to south London and was eventually able to entice Miguel Muñoz’s men to Selhurst for a fee of £10,000 plus expenses.

Arranging the fixture was a huge coup for Palace, who became the first English side to host Real south of Manchester. At the time, there was no bigger club in the world and Los Blancos were playing in the best form of their history. 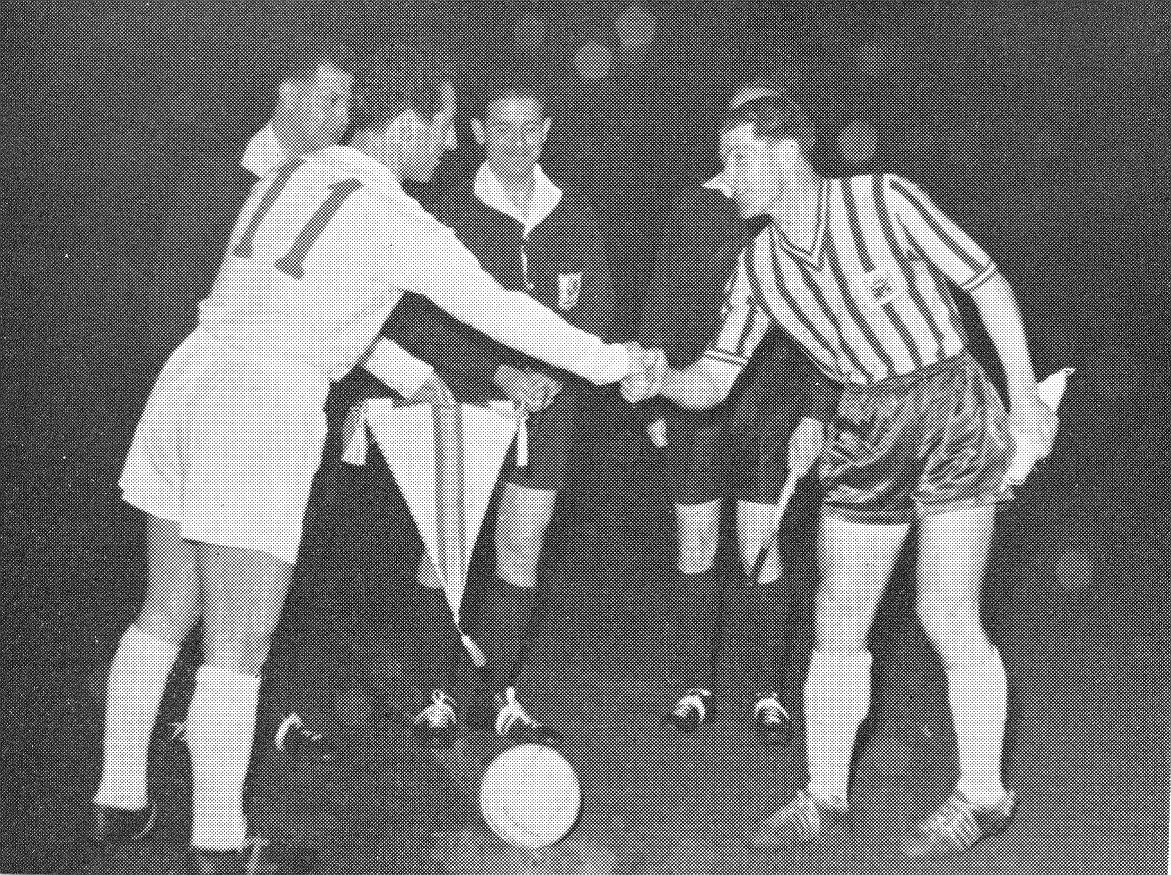 Winning five of the eight most recent La Liga titles (and going on to claim seven of the next), Real had also won five consecutive European Cup titles between 1955-60 - a record standing to this day.

Amongst their ranks were the icons Alfredo Di Stefano, Francisco Gento, Raymond Kopa; a young Amancio and, of course, into his third of five consecutive seasons as the club’s top scorer, Ferenc Puskas.

Widely regarded as one of the greatest players to have graced the game, Puskas should have been nearing the end of his career when he joined Real Madrid aged 31 in 1958. Considered too old and not fit enough by clubs across Italy, Puskas’ time after an astonishing career with Hungarian side Budapest Honvéd should have started to peter out. 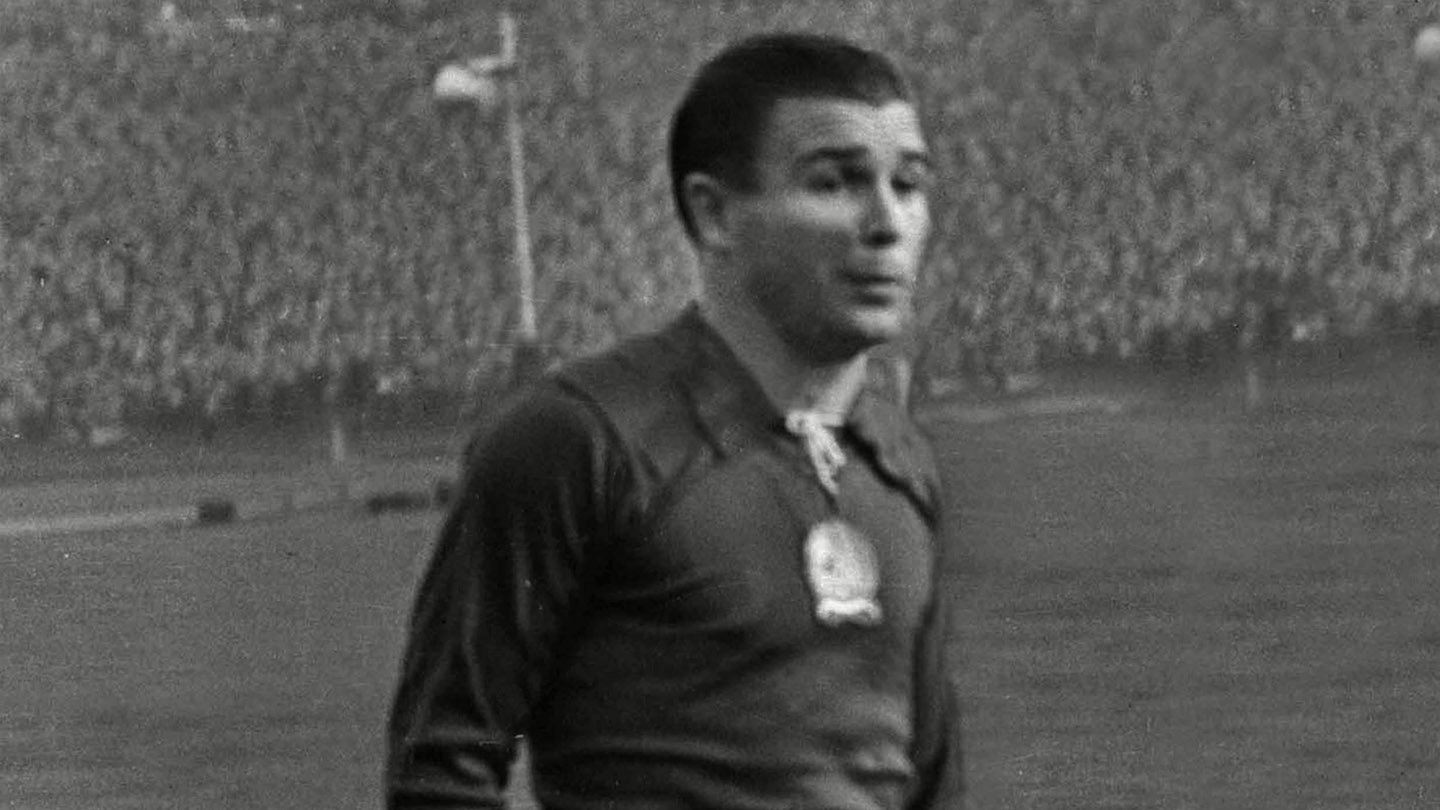 When he joined the indomitable collection of stars at Real in their most rampant period, ‘The Galloping Major’ - a nickname earned due to his military title awarded to him while at army-run Honvéd - Puskas was a demanding, leading figure who stood out from the crowd in spite of his teammates' calibre.

Flying past the Pyrenees two weeks away from a European Cup final against Benfica, Real Madrid’s star-studded team must have headed for Selhurst Park expecting to be victors of a whitewash.

Instead, the plucky third tier south Londoners gave Puskas and his colleagues a game befitting their status.

Wait commented in his pre-match programme notes: “It is with pride that we welcome the Real Madrid team and officials tonight. We feel honoured that the greatest Club team in Europe should agree to officially open the magnificent floodlights installed at the beginning of this season.

“This is the first time that Real Madrid have played in London […] so forgive us if we throw our chests out a little for being able to arrange such a fixture, it needed quite a lot of courage.”

Pushing ticket prices up to 10 shillings, Palace opened their doors to the Spanish giants and 25,000 south Londoners on a bleak, wintry evening in April 1962.

Real had arrived prepared for the occasion, fielding 10 of the 11 players who would go on to fall against Eusébio’s Benfica exactly two weeks later.

Wearing the iconic all-white, long-sleeved kit, the blank expanse which birthed the Los Blancos nickname uninterrupted across the players bar the golden crown of Real’s badge, Miguel Muñoz’s men lined up proudly under the glare of Palace’s lights. His hair slicked back, Puskas stood furthest from the hosts.

Palace too had talent of their own, with memorable names such as Johnny McNichol, Terry Long and Roy Summersby all lining up against the Spanish visitors. 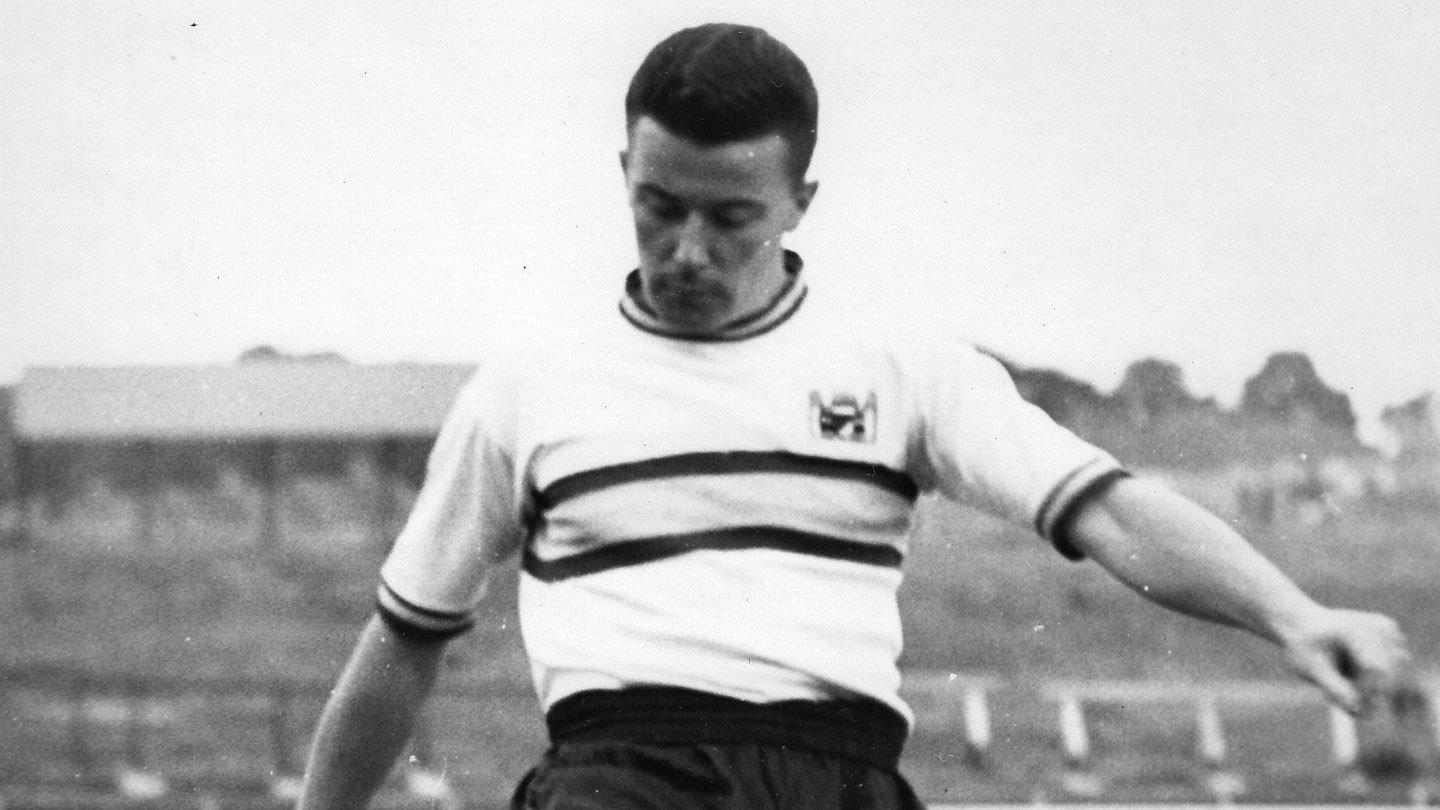 However one of the most eye-catching names - even when placed alongside the likes of Puskas and Di Stefano - was wearing red and blue: Johnny Byrne, a Palace icon recently departed for West Ham United.

Later compared with Di Stefano by Hammers manager Ron Greenwood, Byrne’s time at Palace came to a temporary halt when he joined the east London club for a Second Division British record transfer fee. Somehow, though, Palace had managed to negotiate a clause in the Englishman’s contract to procure his efforts for one further clash in a bid to increase attendance and ability against Real.

Shortly after future World Cup referee Michel Kitabdjian blew his whistle to begin proceedings, even the likes of Byrne couldn’t prevent Palace from falling behind.

It took barely eight minutes for Los Blancos to claim a two-goal lead, the hosts seemingly in awe of their high-grade opposition.

Behind to Di Stefano and Gento’s respective efforts, the Eagles pulled themselves back into the clash through the head of Ron Heckman. But half an hour in, Real’s Hungarian talisman stamped his indelible mark on the game when he powered home a free-kick from 20-yards out. In doing so he demonstrated the strength, precision and goal-hunger south Londoners had only heard about, or, perhaps, seen through the grainy lens of a boxed television.

Naturally, Puskas was again intrinsically involved just minutes later when he linked up with Di Stefano to supply Isidro Sanchez with a scoring chance, the right-back happily obliging.

At half time, then, the Eagles were unsurprisingly trailing their guests 4-1 and nobody could complain in the face of such superiority. Replacing goalkeeper Vic Rouse with a young Bill Glazier at the break, Rowe’s team emerged a re-energised side and their trademark eye-catching football paid dividends as they netted twice through Andy Smillie and Terry Long, heaving themselves just one goal from catching the Spaniards.

But Real exhibited their footballing intelligence after the flair of the first half and shifted their style of play to drown-out any hope of a Palace comeback.

At the end of the 90 minutes, the clash finished 4-3 to the visitors but the Eagles had come within inches of holding their own against the world’s greatest team.

Palace would go on to finish 11th in the Third Division at the end of the 1962/63 season, with Real winning La Liga, the Copa Del Rey and finishing runners-up in the European Cup. The class of the respective clubs may have been separated by a chasm, but on the night it took just one goal to divide the Eagles with Real Madrid.