The head teacher of Churchill Primary School, Keith chose to don the huge – almost frightening – eagle costume of the late 1990s on a whim.

With a vacancy advertised in the programme, Keith thought: “‘that would be fun. It would be interesting to get out onto the pitch and meet the players and have a laugh with the fans.’” 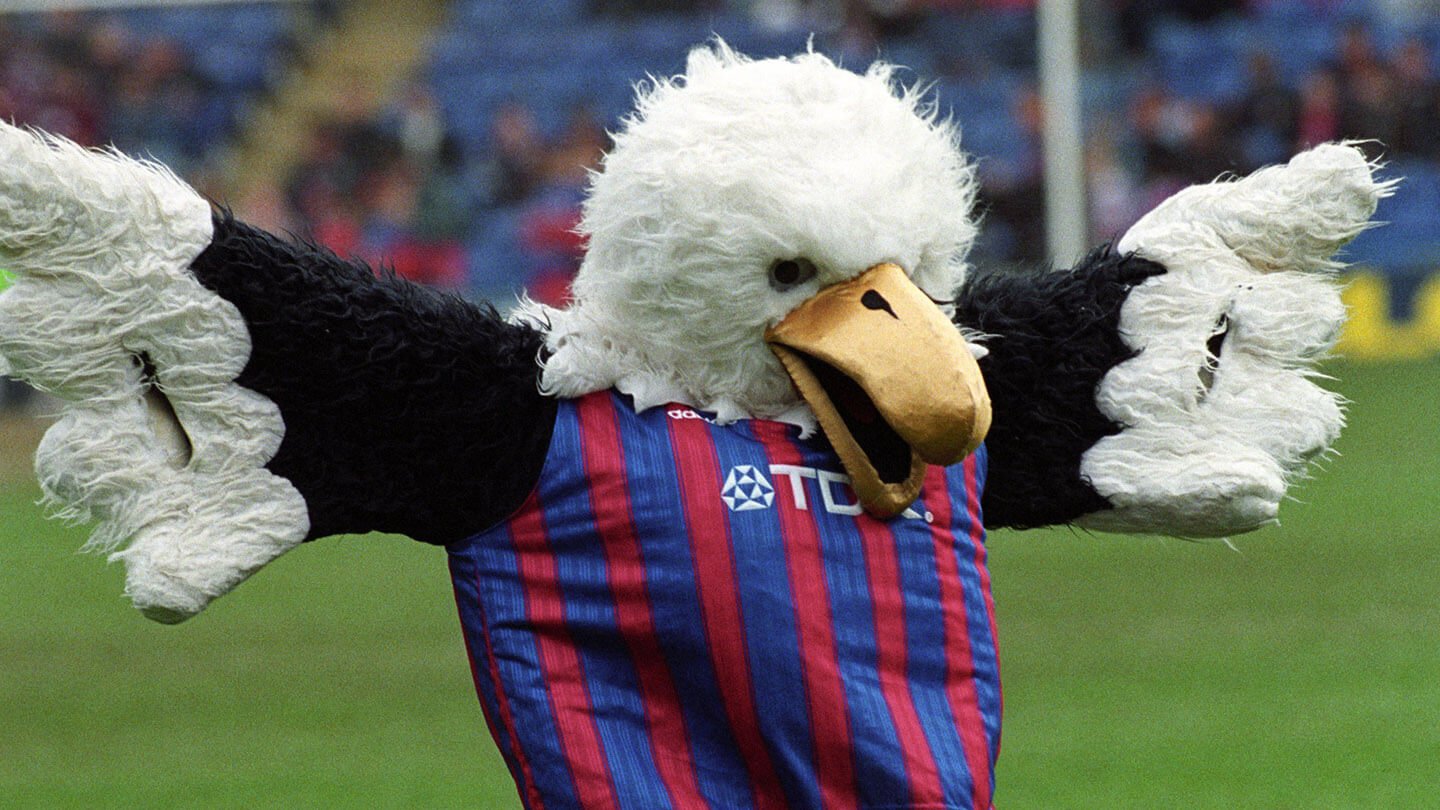 For over seven years, Keith defied his wife’s expectations and attended nearly every clash at Selhurst Park, sporting the eagle outfit and entertaining fans come rain or shine. Speaking to him recently, it sounds as if he loved almost every second of it, in spite of the oddities that come as part and parcel of the role.

“On cold days, the costume was really quite pleasant. On hot days it was fairly obnoxious and you’d have to change your t-shirt and that. You’d Febreze the inside of the head. That made it fairly pleasant for the next time.

“Every so often, I also used to take the costume home and take it around to our dry cleaners. He was highly chuffed to be washing the eagle costume and he had a special programme on his machine marked ‘eagle costume’. He wouldn’t charge because he thought it was such a laugh - such an unusual request.”

But Keith’s double life as teacher by day, eagle by night was not something which could be kept secret. Revealing to parents at his school why he was unable to attend a regular Parent Teacher Association meeting, Keith outed himself as the club’s energetic mascot.

“I’d say: ‘unfortunately, I can’t come tonight’ and the parents would say: ‘Why not?’ I’d tell them I’m flying. They’d say, ‘where are you flying?’ and I’d say: ‘Oh, just around Selhurst Park. I’m the new mascot at Crystal Palace’ and they thought it was absolutely hilarious.

“Going onto the pitch at Wembley for the play-offs was absolutely super. I went across to the end where the Palace fans were and I saw one of the kids from my school. When you think how many thousands must have been there and I could hear this voice and I looked up and there he was waving his hands. Seeing him there was quite special.”

SEE ALSO: How well do you know Roy Hodgson's Eagles?

However, Keith’s student behind the towers of Wembley isn’t the only pupil who stands out in the former teacher’s mind…

“I used to teach John Salako when he was nine or 10 and somewhere I’ve got a picture of him playing for the primary school. He had been transferred to Reading and we played Reading one evening and so I went onto the pitch and said, ‘Hello, John, how are you doing?’ and he said: ‘Is that you in there, Sir?!’

“His mum, Mrs Salako, used to come to the school and help listen to children read for many years and she was a lovely lady, really smashing. When I retired, John presented me with a Palace shirt with ‘Blackwell 16’ because I’d been a head teacher for 16 years. That was a bit special. John was a model pupil!”

While most fans in SE25 probably wouldn’t recognise Keith as the teacher of one of its brightest talents, they would have known him from TV as the co-star of a series of Coca Cola adverts launched to celebrate some of the most unique fans in football: ‘Eat. Sleep. Drink.’

The advert saw Keith and his son Tom share the screen as the former paraded across the Selhurst turf and the latter express his embarrassment at having a seven foot eagle for a father.

You can watch it by clicking here.

It was a popular hit with football followers in south London and beyond and both Keith and Tom swiftly became well known faces across the country.

“I got a phone call from some friends of ours in Kent and they said: ‘Have you seen the Daily Mail this morning? Your picture is on it!’ I went down to the paper shop and bought the Daily Mail and there it was: ‘Is this England’s maddest fan?’

“With Tom, after the advert, people would often see us and link us together. We got to Charing Cross going to Wembley and I had the big bag with all the costume in and as we walked down the escalator, we heard this crowd singing ‘Eagle, eagle, give us a wave!’ So of course I gave them a wave and there was a big cheer and everyone was happy.”

The life of a mascot can’t be a typical one. But for Keith Blackwell, teacher of a Palace legend, star of a multinational Coke campaign and favourite amongst the Selhurst faithful, life must have felt very atypical indeed.

So much for your average teacher.