In the early 1970s, Manchester City manager Malcolm Allison was relentless in his pursuit of a little-known teenage winger from fourth-tier Southend United.

He sought to sign the young Essex prospect ceaselessly, and when his transfer target moved into the third-tier with Southend’s promotion, he tried even harder.

The youngster was struggling to hold down a first-team place with the Shrimpers and hit his 20th birthday feeling “a bit unlucky,” however. Two months later, Allison took over at Crystal Palace, and the unlucky winger remained in his sights.

That winger, overlooked by Southend, had caught Allison’s eye.

That winger was Peter Taylor.

“I was in and out of Southend’s first-team which I felt was really, really unfair because I thought I was doing well enough to be playing every week,” Taylor recalls almost 50 years later.

“Then out of the blue I was told about Crystal Palace and, of course, I’m very, very interested in going to Crystal Palace - what a lovely opportunity for me. And for me to have the opportunity to meet Malcolm Allison was tremendous. 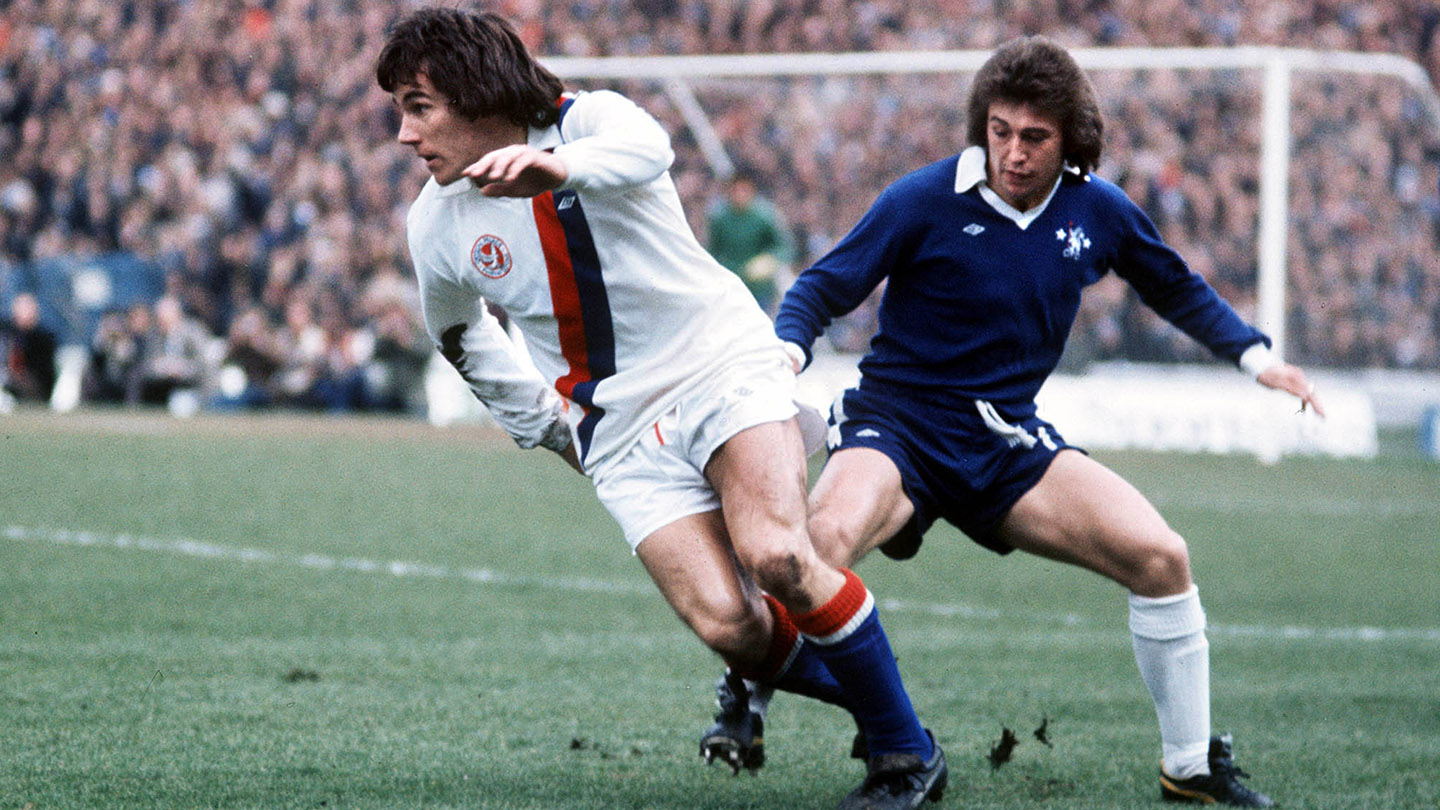 “When I then eventually got to speak to Malcolm, he said to me it’s the sixth time he tried to sign me!... I was staggered. In this day and age, you’d have known about things like that but I didn’t have a clue. From the first second I met Malcolm until the last second I spoke to him, I loved him; I absolutely loved him.

“Honestly, every time I walked out of his office, I thought to myself: ‘You’re not a bad player. You’re a good player.’ It’s the little things - he would give you the confidence. He’d say: ‘Go and show ‘em’. You certainly wouldn’t hold back with Malcolm, not the way he treated me anyway; he gave me the licence to try anything I wanted.”

Taylor’s arrival marked the dawn of Allison’s flamboyant south London stint in style, with the classy young winger scooping Palace’s Player of the Year in his first season, 1973/74.

But neither Taylor nor Allison could stop the newly rebranded Eagles from sinking to the Third Division, a remarkable drop for a sizeable, recently top-tier club.

“When we got relegated,” Taylor says, “the only thing I felt was so sorry for Malcolm. He was like a dad to me in some ways and I just felt sorry for him. I thought: ‘You don’t deserve that.’

“When we played, we were a good team. I’ve watched videos recently of when we played Leeds [United] or when we played Chelsea and, cor blimey, we didn’t just beat them, we played well, we were better than them. And we were a Third Division team. That’s why people think well of Malcolm.”

Today, Taylor adamantly rebuts the suggestion that he was too talented for the Third Division, stating “I loved every second.” But the winger’s skill was clear to see, and Allison’s pursuit of his signature was vindicated as the prodigy led Palace to an FA Cup semi-final and earned four England appearances shortly afterwards.

As it is today, international recognition was hard to achieve for a player in the third-tier, but Taylor was up to the challenge.

“I was playing Division Three and then all of a sudden [I’m playing] against Scotland at Hampden Park,” he says. “It wasn’t easy, I can assure you.

“At that time, I’m a confident young player and absolutely delighted with my call-up and didn’t have too many nerves. If it happened now, I’d probably have a heart attack. But when you’re a young player like that, quite rightly so, you shouldn’t have the nerves, you should go for it and enjoy every game you play because you’re in a lovely world; you’re playing professional football for a job.

“But I don’t think I played very well for the senior team.

“Without a doubt, people talk to me about spells in my career and, as a player, I produced my best form for Palace and I’m very proud to say that… if I’d carried on playing like that for the senior [England] team, I would have got more caps.”

Taylor’s ability on the pitch may have earned him plaudits both domestically and internationally, but he became an iconic Palace figure for more than just his playing calibre. His relationship with the fans and off-pitch charisma were notable fillips, too. 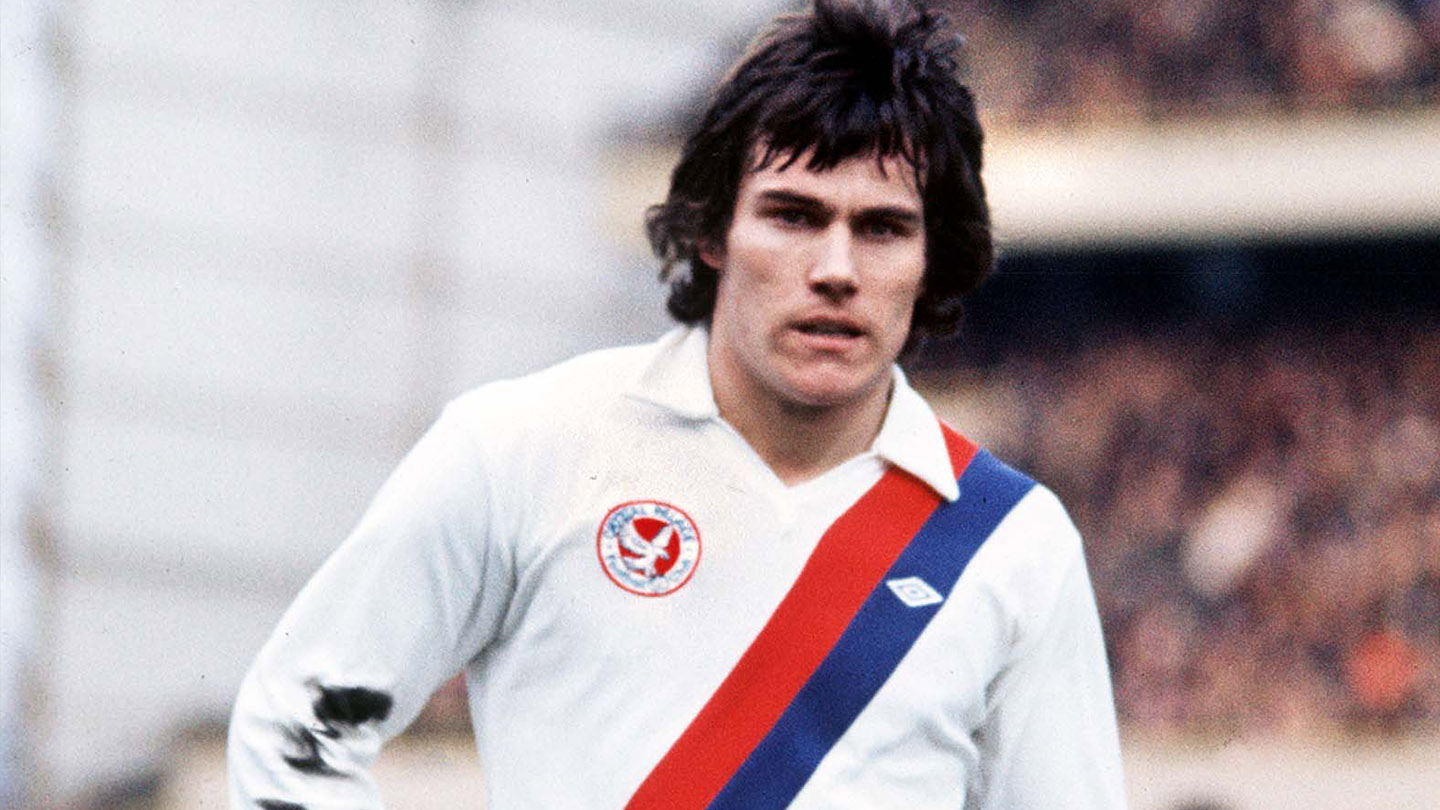 Taylor continues: “My first game for Palace was Oxford [United] away and the support for that game was good. But as soon as I then got to playing at home, oh my word, I loved it. The supporters were fantastic. For me, imagine, I’m playing in front of three or four thousand with Southend, now all of a sudden I’m playing for a big team.

“People look at me now on the television - not that I’ve been on the television for ages - and think: ‘He’s probably an old boring bloke.’ But I was the opposite. I was the club idiot who had a laugh and would wear false hands and the things I used to get up to...” Taylor trails off, lost perhaps in clouded memories.

We take the opportunity for an easy prompt: ‘Norman Wisdom’.

“I think that started at Palace,” Taylor picks up again, discussing his somewhat infamous impression of the comedic actor. “Because at Southend I wouldn’t have had the confidence, I was just a young player trying to get into the team.

“I’ve absolutely idolised Norman Wisdom all my life. He’s somebody I’ve always taken off. I don’t take him off now - it’s not very good - but I did eventually get to meet him, which was lovely. There was an England game in Albania and I met him there. I couldn’t believe my luck - I didn’t do the impression!”

After almost three years south of the Thames, Taylor left to pursue his footballing ambition while at the peak of his career: playing in the top-flight.

He moved to Tottenham Hotspur after “trying like mad” to get Palace promoted and continued his playing days with Spurs and Leyton Orient, with brief spells across the country’s lower divisions following.

By the time he reached non-league outfit Dartford, Taylor’s sights were set on his post-playing career, and the then-33-year-old kick-started a lengthy spell in the dugout.

With success mounting as he progressed from Dartford to Southend to England, Taylor again caught the eye of the Palace hierarchy.

After he secured consecutive promotions with Hull City, Palace called the manager back 33 years after he departed. “All of a sudden Palace came in,” Taylor says, mirroring his surprise at the attention as a player. 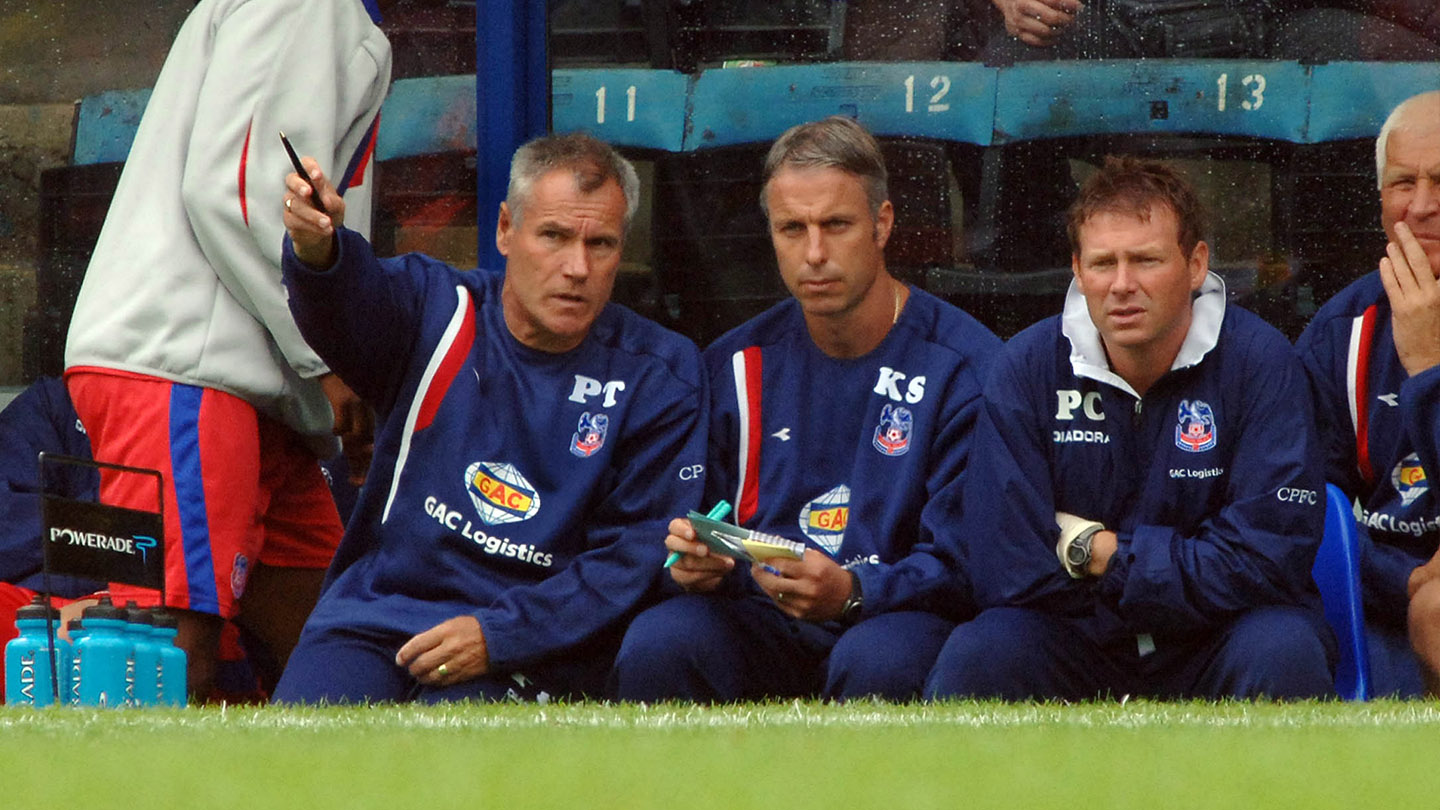 “People have this in their careers in good times and bad times: I was very confident as a manager. Very confident. I felt as though I would succeed.

“I didn’t look at my reputation too much. I looked at: How can I get these into the top division? Even if I was worried about the reputation I had, I still would have taken the job. I’ve got to say, when I went [to Selhurst] with Hull City, the welcome that I got was the proudest welcome I’ve ever had anywhere.

“I told my wife when I got home: She would never believe what I got just before kick-off. It was unbelievable. I was very fortunate to have that. Very fortunate.

“The opportunity to come back to a place I knew I’d played well was too good to give up.”

Taylor’s return to south London - from the touchline to the dugout - saw the Eagles struggle to maintain their play-off earning form from the previous season with successful spells at the start and centre of their campaign. 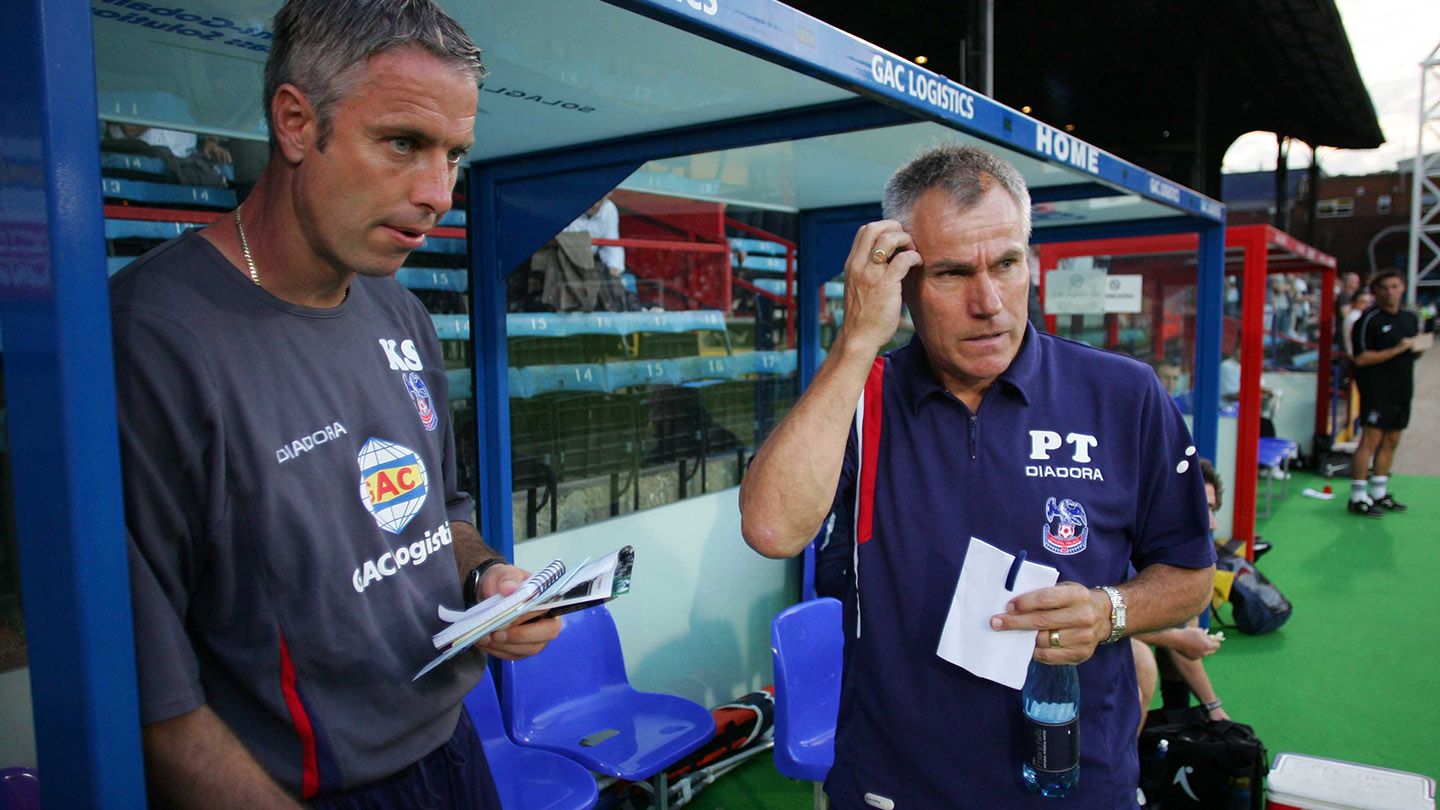 Leeds ended Palace’s eight-game unbeaten run with a 1-0 victory, but manager Dennis Wise was apoplectic at full-time. A player from the Whites’ squad had leaked the home side’s team to the opposition.

“It didn’t come from somebody to me,” Taylor says, recalling the incident carefully. “One of my staff said to me: ‘By the way, that’s their team.’

Today, Taylor suggests Palace required “a service” to stabilise in their scramble for promotion, and says the job “wasn’t easy”.

Taylor’s managerial career continued after he departed SE25 for the final time in October, 2007. And, reaching that point in conversation, we believe we’ve hit the end of our time with him. 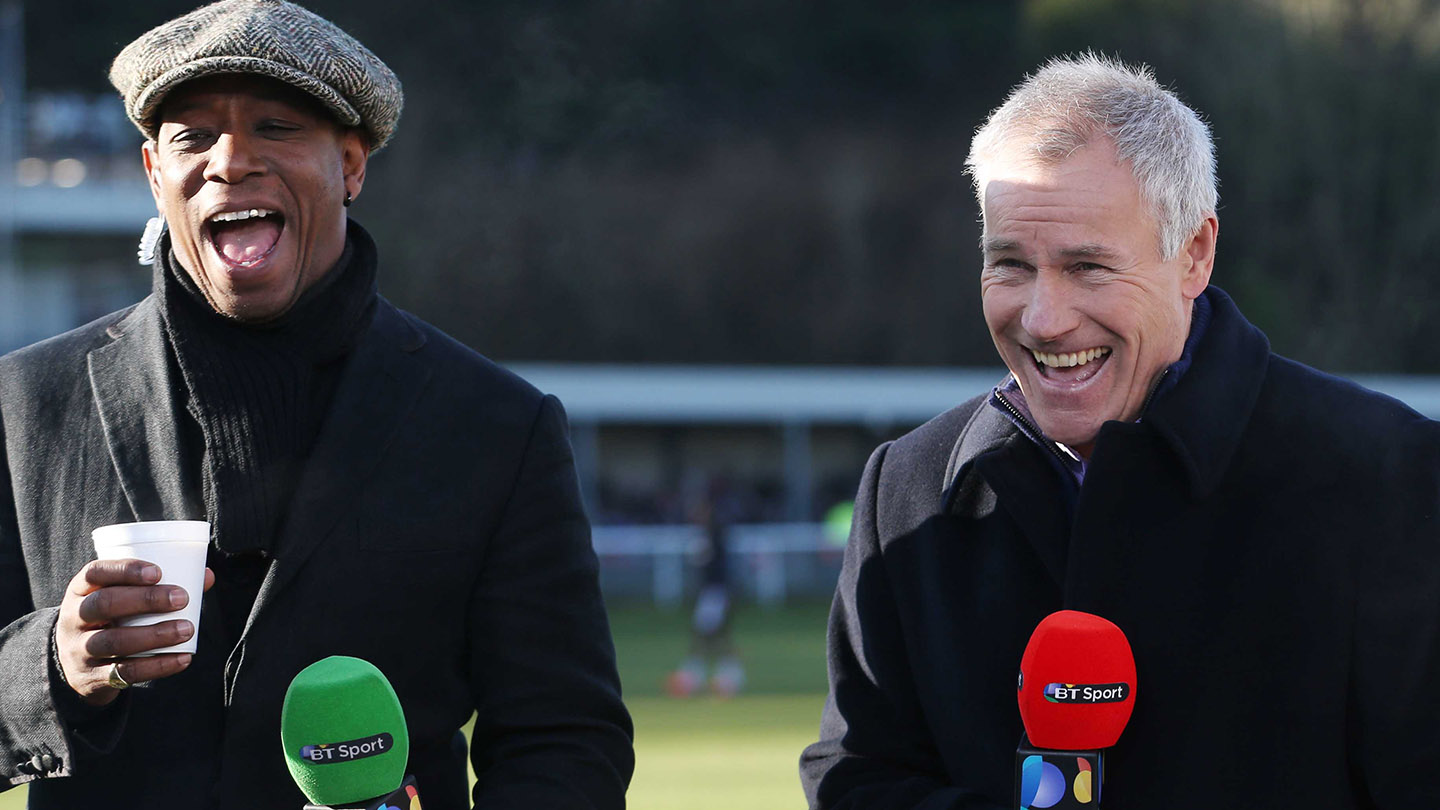 But he stops us short of hanging up.

“Can I just say one thing?” Taylor asks. “How much I respect Roy Hodgson. I’ve been out of work a few times in my career, and the times I’m out of work, I always go and watch Roy.

“When young coaches ask me for advice, I say to them: ‘Make sure you go and watch coaches work.’ To me, that’s the type of thing they should be doing; watching people like Roy. He’s an absolute artist at his trade; I love the man.

“I’ve met him a few times because he was a friend of Dave Sexton and Dave was my assistant in the England Under-21s. We had dinner in Ireland once and he’s a top, top coach. If you ever want to learn anything, go and watch him work.”

Clearly, Malcolm Allison saw something special as he pursued a little-known teenage winger in the early 1970s. But little did he know then how long the ensuing relationship with Crystal Palace would last. And, as Peter Taylor watches the Eagles’ current manager to this day, it appears that relationship lives on.

READ NEXT: The truth behind the strangest story in Palace’s history