Proud and Palace founder Stephanie Fuller’s grandfather lived in New Addington and she moved to Croydon in her 20s, getting a Palace Season Ticket in the mid-1990s.

It was the defining yo-yo era: promotion, relegation, struggle, administration. She calls it a “brilliant” “bloody rollercoaster”.

“I often think my happiest Palace memories are in the Championship,” she says. “I loved away days at Walsall and Grimsby Town… It’s been great – I just love going to the Palace. It’s so good. It’s not really like supporting a football team; it’s a subculture in itself.”

“I was aware there was negative language about LGBT+ people used [at football] but I wouldn’t have described it as that because I didn’t have a name for it… I don’t think that words like homophobia were in the public consciousness 25 years ago.

“And so this negativity and language pervades your environment and you know it’s aimed at you. You don’t know what it’s called but you know it’s bad and that, actually, what you represent within that [crowd] is not a good thing and it’s something people don’t like, don’t want to see, hear or have around them.

“I think that’s probably how I felt then [the turn of the millennium]. There was a period of time shortly after that where, as I was coming to terms with how I felt about myself, I didn’t feel like that and football could coexist. So there were a few years where I stopped going.

“I felt I couldn’t go to football and be happy with who I am – because football didn’t want people like me. Looking back I probably should have talked to my friends at the time but it just felt impossible and it was honestly easier to say nothing. 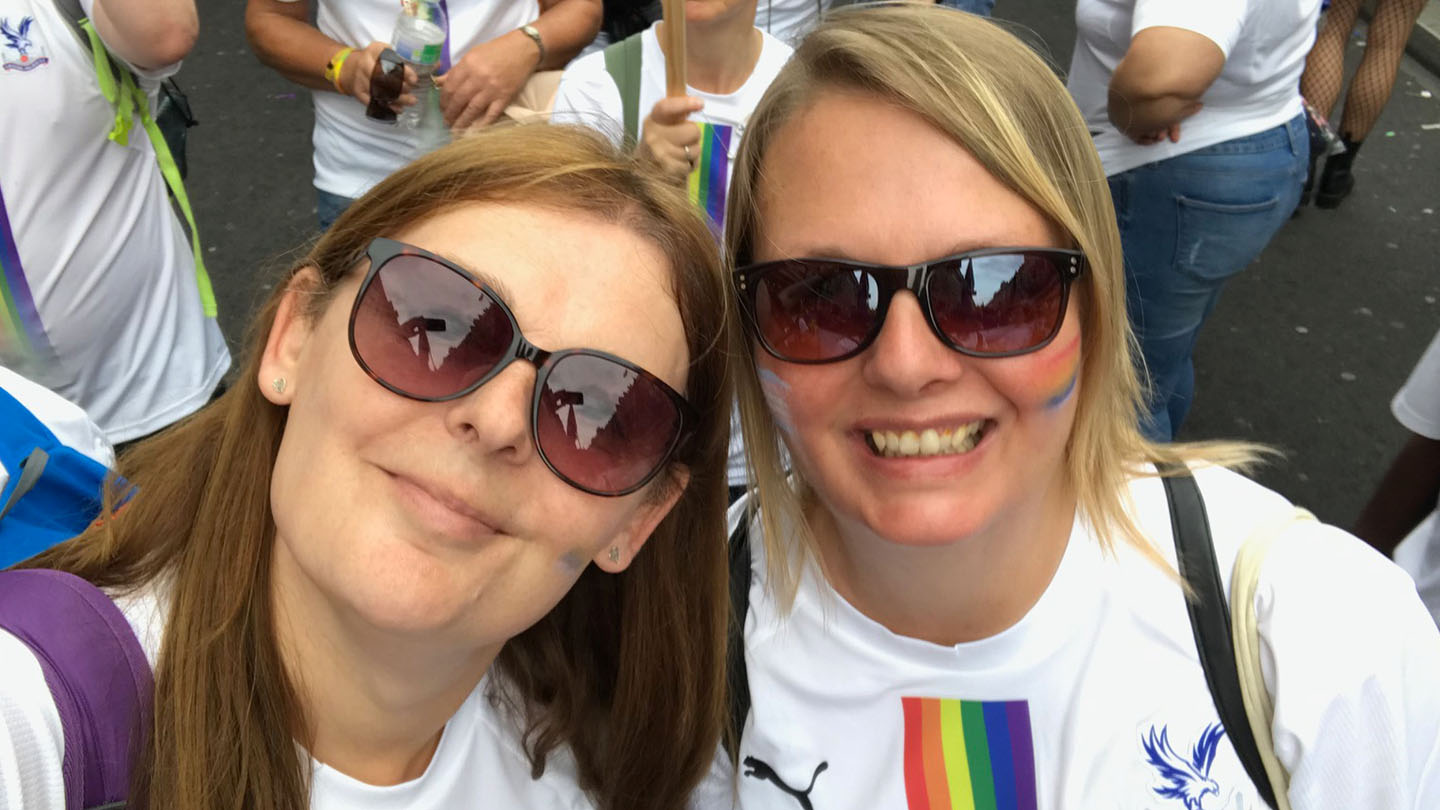 “I was aware it was not a good place for people from the LGBT+ [lesbian, gay, bisexual and transgender plus] community. It was significant enough for me to think: ‘I can’t be part of football, then. I have to choose.’

“I missed it so much. Football is so much a part of who I am – it’s really, really important to me. I love it.”

After a few years away, Stephanie eventually decided to return to football.

But, upon returning, her fears surrounding hostile comments about LGBT+ people in the sport were reinforced.

“I was anxious, if I’m honest, and it didn’t take long for that to be proven right… We were playing someone like Stoke and their ‘keeper was taking ages over a goal-kick, so the guy in front of me jumped up and shouted really loudly: ‘Hurry up, you f------ f-----.’

“[He said that] like it was completely alright; nobody should have a problem with it and, what’s worse, nobody did. Nobody had a problem or, if they did, they didn’t say anything.

“I just remember thinking: ‘That’s exactly it.’ It’s part of the reason I later started Proud and Palace.”

She says she initially “got quite a lot of abuse back,” but soon received contact from fellow fans, Emma and Deano. It wasn’t long until the club reached out and, after meeting staff in London, Proud and Palace was then officially recognised by Crystal Palace. 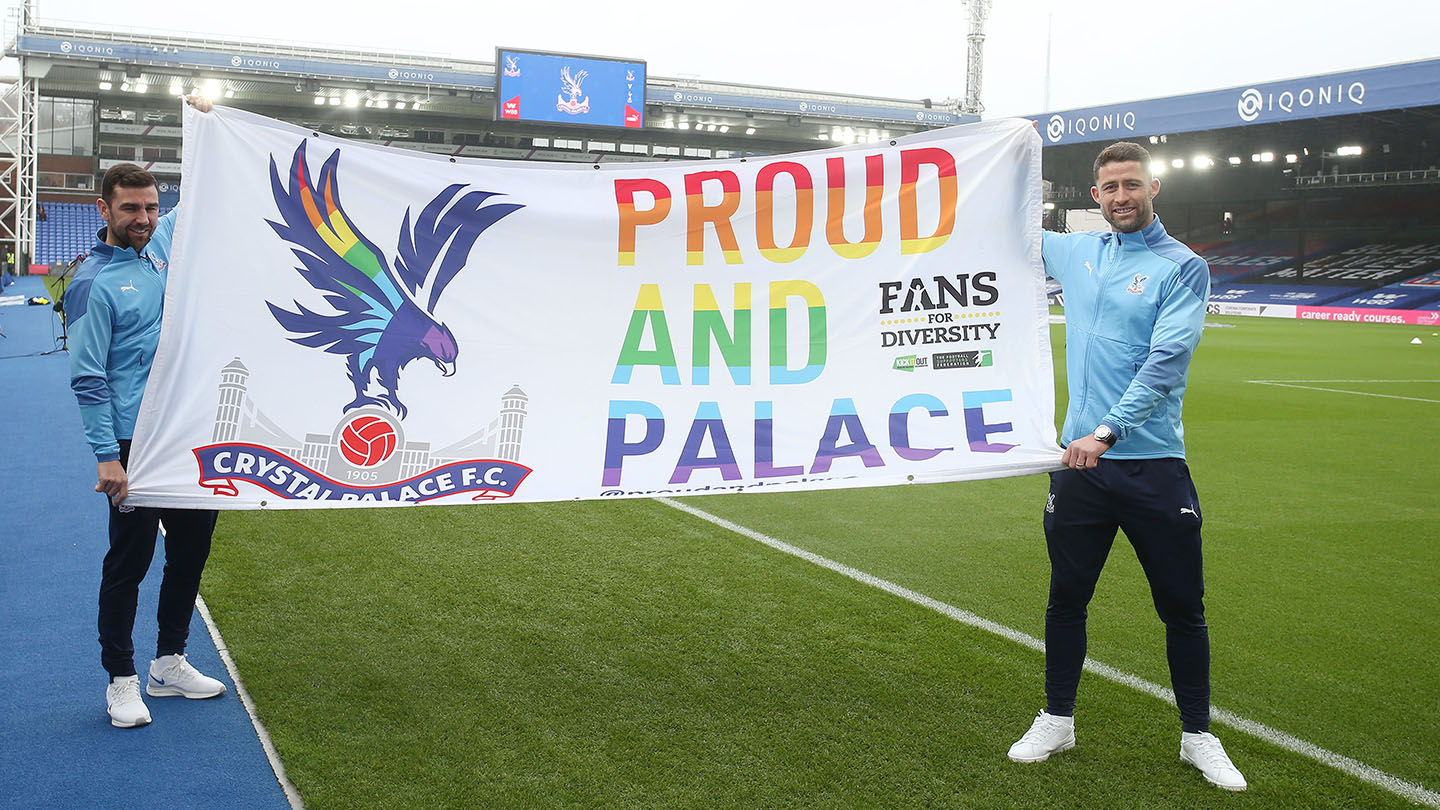 Stephanie points out that the supporters whose own identity is used as a slur - some Proud and Palace members, some not - are the same supporters who stepped in to back the club at its lowest financial ebb, donating alongside others when the club entered administration in 1999.

They’re the same supporters who yo-yo'd between leagues, who surrounded Lloyds Bank in 2010 and who left Wembley broken-hearted in 2016.

“The thinking [behind Proud and Palace] was: when that guy jumped up in front of me and shouted what he shouted, he had no idea whether the person sat next to him was straight, bi, gay or trans. He didn’t know and therefore didn’t think about it.

“When LGBT+ people go to football grounds, they don’t all sit in the same section with a big rainbow flag in front of them – they’re all spread right through the stadium and have always been there.

“Palace, along with every club in the country, does have fans from the LGBT+ community and they’re important parts of the fabric of the club. Many have been going for more years than I care to remember and have been there when the club needed them.

“And yet they go to Palace and their identity is used as a form of abuse. That just cannot be right. 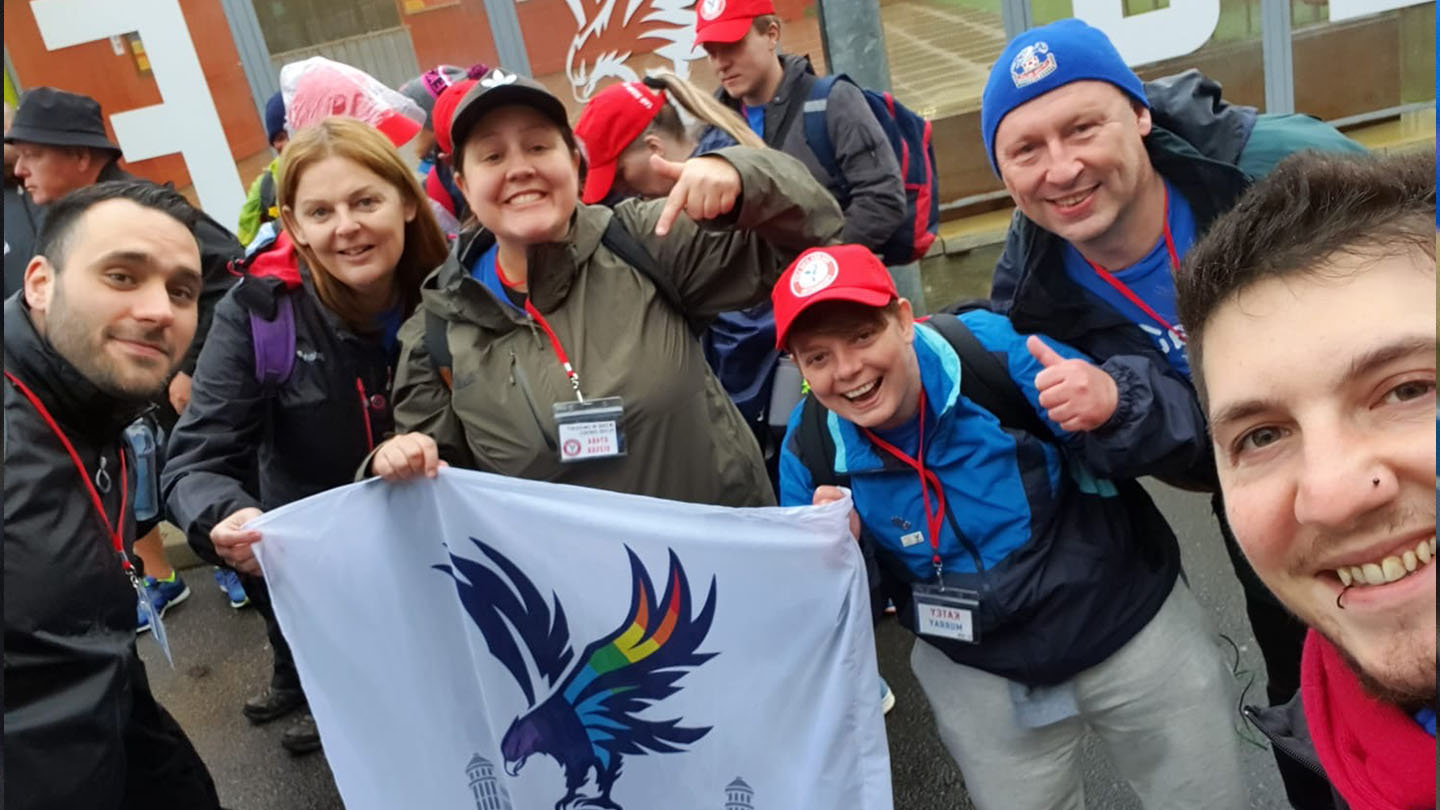 “We are into football and this is just part of who we are, but actually we’re a bit fed up of having our identities used in such a negative way. So Proud and Palace allows us to have a platform for them.”

Away from football, Stephanie has recently become General Manager of national LGBT+ helpline, Switchboard. The organisation has existed since 1974, has over 200 volunteers and was contacted by 17,000 people in 2020 alone.

It provides “calm words when you need them most,” Stephanie says. “Switchboard is a listening service for the LGBT+ community. It’s for people that basically need somewhere to talk about how they’re feeling – that can cover just about everything you can possibly imagine.

“Often people are in very difficult situations and they’re not sure how they feel about their sexuality or gender identity and for a lot of people that’s a very difficult journey to make.

“In the last year, we’ve seen a significant increase in the contact we’ve received. I’m sure that’s in a large way down to the pandemic because a lot of people have found themselves having to return to accommodation that wasn’t safe for them, perhaps returning to families where they’re not supported or living in an environment where they can’t be who they really are. And they’re really struggling.

“We get calls from all across the LGBT+ community, but also their families and friends and people that just want to know how to support them.”

Calls to Switchboard in 2020 peaked at 60% up compared with the same point in 2019 – sadly a significant growth for a 47-year-old organisation. 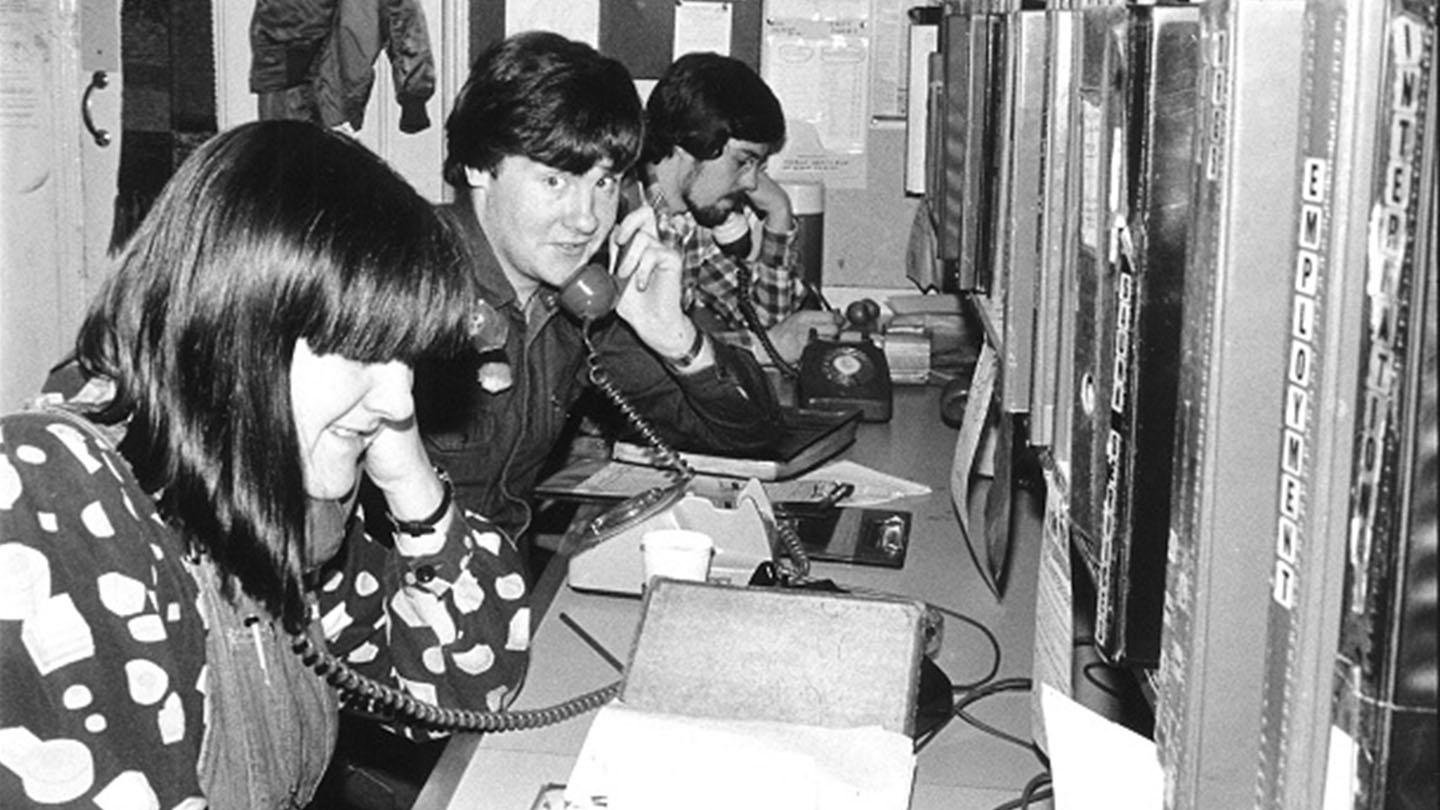 Stephanie says the world is “a long way away” from “this panacea of everything being great, fair and equal,” but still holds a positive outlook on increasing support for the LGBT+ community and declining homophobia.

She is able to illustrate both through her remarkable work in and out of football:

“Switchboard has evolved a lot over the years from being a telephone service with a single phoneline above Housman’s Bookshop in King’s Cross. We’re still in that vicinity but we now have a phone room of six lines [and communicate through email and instant messenger].

“One of the big fears we [Proud and Palace] had when Brighton eventually got into the Premier League was that first game. We knew that was going to be problematic for us as a group. We put a statement together around it… which was called ‘99 reasons to hate Brighton, but homophobia isn’t one.’

“We went to all other fan groups saying: ‘Look, we plan to put this out about three days before the Brighton game, would you be happy to put your logo on it and tweet it on the same day?’ We had 26 different groups put their logo on it – FYP, The Eagle’s Beak, HLTCO, the American fan groups.

“That went live and then what happened was what we thought would happen: broadly speaking, there was a good response, but there were quite a few negative ones.

“But it wasn’t us responding to them – it was the other groups saying: ‘Actually, you’re embarrassing yourself coming out with this claptrap. Do you not know what decade we’re in?’ That was really powerful.

“[Proud and Palace Co-Chairs] Mark, Emma and I spoke recently and commented on the Brighton game that’s just passed (when we had stopped laughing at Benteke’s winner): we didn’t see any significant homophobia online around the clash.

“That’s a story that’s not often told. It’s credit to Palace supporters – it [LGBT+ phobia] is not part of the landscape to the extent it was. I’m not naïve enough to say it’s gone completely, we know it hasn't, but we have to say it’s improved.”

Proud and Palace call themselves Palace fans first and LBGT+ second. They have a WhatsApp group and podcast focused on football and their Twitter is full of the same opinions, complaints and jokes banded around the club’s wider fanbase.

During one of many football-focused parts of this interview, Stephanie says: “The Monday night game against Brighton reminded me of how much I love football.”

She was talking solely about the on-pitch triumph. But, to a little less fanfare, the drop in homophobia between Brighton games just four years apart is as easy to celebrate.

There is undoubtedly a long way to go before LGBT+ phobic behaviour is eradicated in football and beyond.

But, thanks to the work of people like Stephanie, organisations like Switchboard and Proud and Palace, and everyday people educating themselves and re-shaping their outlook, one day no one will feel excluded from the sport again.

To find out more about Proud and Palace, follow them on Twitter here. You can read information on Switchboard by clicking here, and their number is 0300 330 0630.

Crystal Palace are committed to promoting messages of equality and diversity: to our players, staff and supporters. We want to ensure that the environment on a matchday is welcoming to all, and that supporters feel safe. We will not tolerate racist or homophobic chants, or discriminating comments towards a particular individual or group of individuals at Selhurst Park.

We also have a phone number for supporters to anonymously report any form of discrimination at our stadium (07507 477 669), which is advertised to all ticket holders and in the stadium.