Today marks 75 years since VE Day – Tuesday 8th May, 1945 – and despite World War II, football seasons we were still being played out during the period.

Club Historian, Ian King, provided us with the programme from the club’s final home game of the 1944/45 season against Brentford.

You can read the final paragraphs from our then-manager George Irwin, with his closing message particularly poignant.

This afternoon we conclude our home League programme with a visit from Brentford, old friends and rivals whom we are once again pleased to welcome to Selhurst Park. They always give us a good game.

Our game to-day will be immediately followed by the Final of the Lambeth A.T.C Cup between Norwood and Brixton Squadrons.

On Wednesday next, April 25th, our Reserves will be entertaining Sundridge, a well-known Bromley football club K.O. 6.30 p.m.

We ring down the League fixtures on Saturday 28th April, with a visit to Upton Park for the return game with West Ham United.

That next season may open in Peace and tranquillity is the hope of us all. 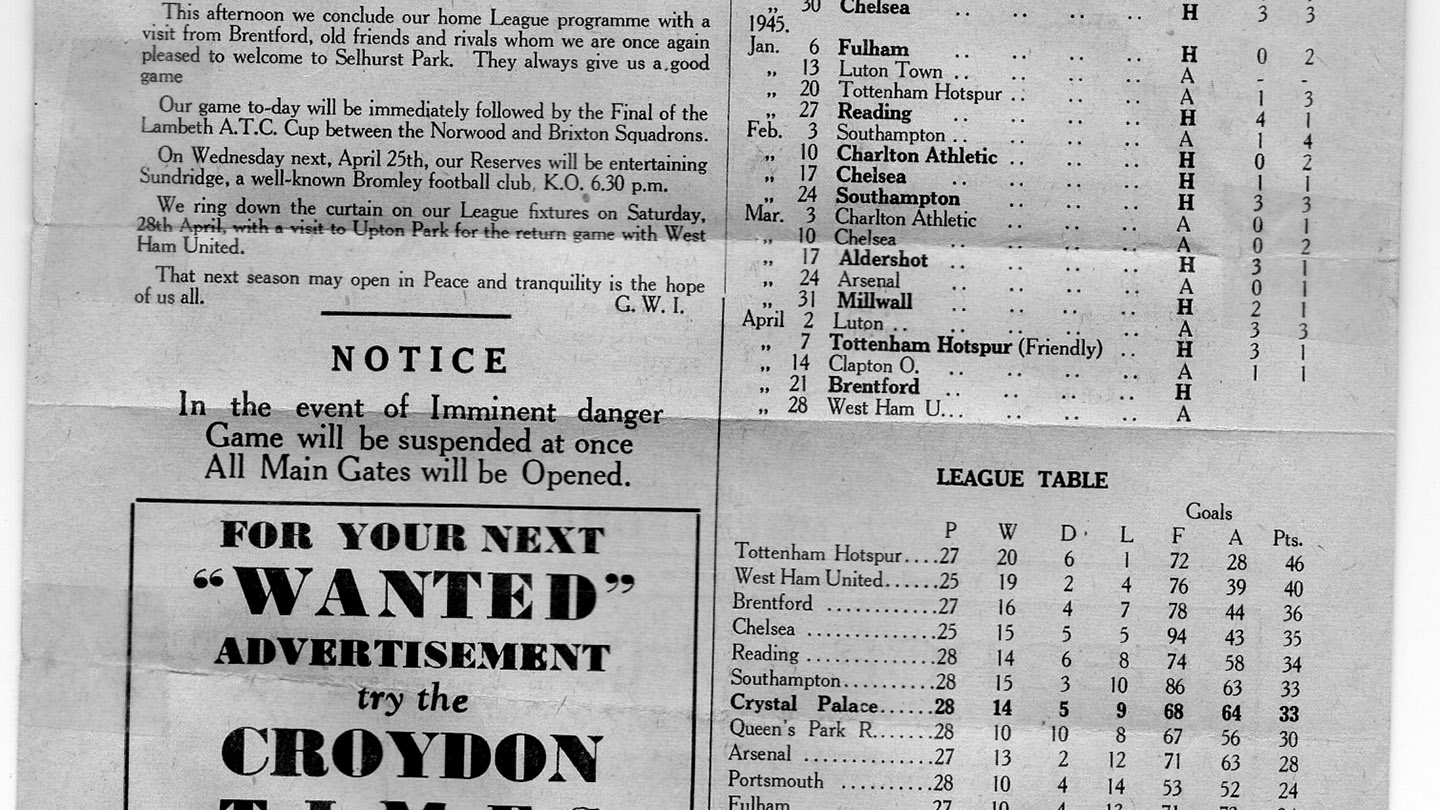 Although the Second World War appeared to be coming to an end the matchday programme sheet still contained a warning message: “NOTICE In the event of Imminent danger Game will be suspended at once All Main Gates will be Opened.”

In the upcoming first-team league games which Irwin referenced in his notes, Palace defeated Brentford 6-1 but closed out the league campaign with a 5-0 loss against the Hammers.

Despite the season ending, Palace still had three friendly games to play, away at Portsmouth on 5th May and then the south Londoners travelled to Leicester City on 19th May.

A week later the Foxes came to Selhurst Park and it is noted in that programme that: “All members of the B.L.A. [British Liberation Army] and returned Prisoners of War are invited to our game this afternoon without payment of admission.”

Back in 1939, Palace opened their season on August 26th, 1939 with a 5-4 victory away to Mansfield Town, then lost 5-0 to Reading on the road before defeating Bristol Rovers 3-0 at Selhurst Park the day before war was declared.

Upon the resumption of league football in 1946, Palace lost 3-1 to Mansfield Town, then were defeated 10-2 at Reading before defeating Bristol Rovers again - this time 2-1.