On this day in 2001, Crystal Palace beat Stockport County 1-0 at Edgeley Park to secure their safety on the final day of the Division One season.

Twenty years later, we take an in-depth look back at one of the most dramatic times in Palace history.

The months leading up to this game were nothing short of chaotic. After a hit-and-miss first half of the season under new owner Simon Jordan, the turn of the year saw the Eagles’ form dip massively.

After losing to Liverpool in the League Cup semi-final – a contrastingly huge achievement in itself – Palace won just two games between February and April 2001. Relegation to Division Two loomed large. Alan Smith, the manager who had previously led the Eagles to the 1993/94 Division One title, was sacked in late April after the bad run of form culminated in a 2-0 home defeat to Wolverhampton Wanderers.

Local legend Steve Kember, who had previously played for, coached, and managed the Eagles, was appointed as caretaker manager for the season’s final two games against fellow relegation strugglers Portsmouth and Stockport County.

Kember describes the moment he was offered the almost impossible job in Palace’s 90+7 digital magazine: “One Saturday evening in 2001, I was having a drink at The Stag pub in South Croydon with Dave Garland, the Academy coach who owned the bar, when Simon Jordan called me. He said: ‘I need to speak to you.’

“Simon and I and spoke for about three minutes. He said: ‘I’ve sacked Alan, and I want you to take over with Terry Bullivant for the last two games. See what you can do.’ That was it. Just like that, I was back managing Palace after almost 20 years.”

Palace were in a precarious position as Kember took the helm. The earlier Wolves defeat meant they were in 22nd place - the relegation zone - three points behind both Portsmouth, with an inferior goal difference, and Huddersfield Town, who had a superior goal difference. Portsmouth had a game in hand, having played 43 games compared to the Eagles’ 44.

On May 2nd, the Eagles made the trip to face Portsmouth at Fratton Park. Pompey had lost their game in hand 3-1 to Blackburn Rovers and the south Londoners took full advantage. The game’s 17th minute saw Mikael Forssell open the scoring and Palace pressed on for more, with Aki Riihilahti and Dougie Freedman making it 3-1 before the break.

Freedman then added a second to make it 4-1 to the Eagles and the match ended 4-2 following a Carl Tiler consolation. The result saw the Eagles leapfrog Portsmouth, leaving the south coast side in the relegation zone.

Huddersfield had drawn 1-1 the day before Palace’s victory at Fratton Park, so the stage was set for the final day. The Terriers would start it in 20th place, two points and two places clear of the relegation zone, while the Eagles and Portsmouth sat in 21st and 22nd respectively, both on 46 points. Only a win would suffice for the Eagles if results elsewhere weren’t in their favour.

The Eagles arrived at Edgeley Park in good spirits off the back of their victory four days earlier. The teams lined-up in similar shapes on the day, favouring a 5-2-3 formation. Palace clearly declared their desire to win by starting three strikers in Freedman, Forssell and leading goalscorer Clinton Morrison.

This was the same shape the Eagles lined-up with in the game against Portsmouth, as Kember put it: “[I said:] ‘I think we should play three up front, not 4-4-2 like normal.’ We had a few lads missing from the back and we had three decent frontmen in Micky Forssell, Clinton Morrison and Dougie Freedman. So we played with two upfront, rotating with one in the hole.”

The first-half started brightly for Palace, as they peppered the Stockport goal with a number of shots and corners in the opening half an hour. Freedman and Forssell, along with Wayne Carlisle down the left, caused problems for the Hatters defence. Elsewhere, former Palace striker Lee Bradbury put Portsmouth ahead against Barnsley, meaning, as it stood, they would stay up at the Eagles’ expense.

Despite the Eagles’ best efforts in the first-half, they could not break down the resilient Stockport defence. There was a glimmer of hope, however, as a goal from Curtis Woodhouse for Birmingham City at the McAlpine Stadium put the Blues in front against Huddersfield.

At half-time, Portsmouth were still leading 1-0 and Huddersfield trailing 2-1. The objective was clearer than ever for Palace: win, and they would stay up alongside Portsmouth. 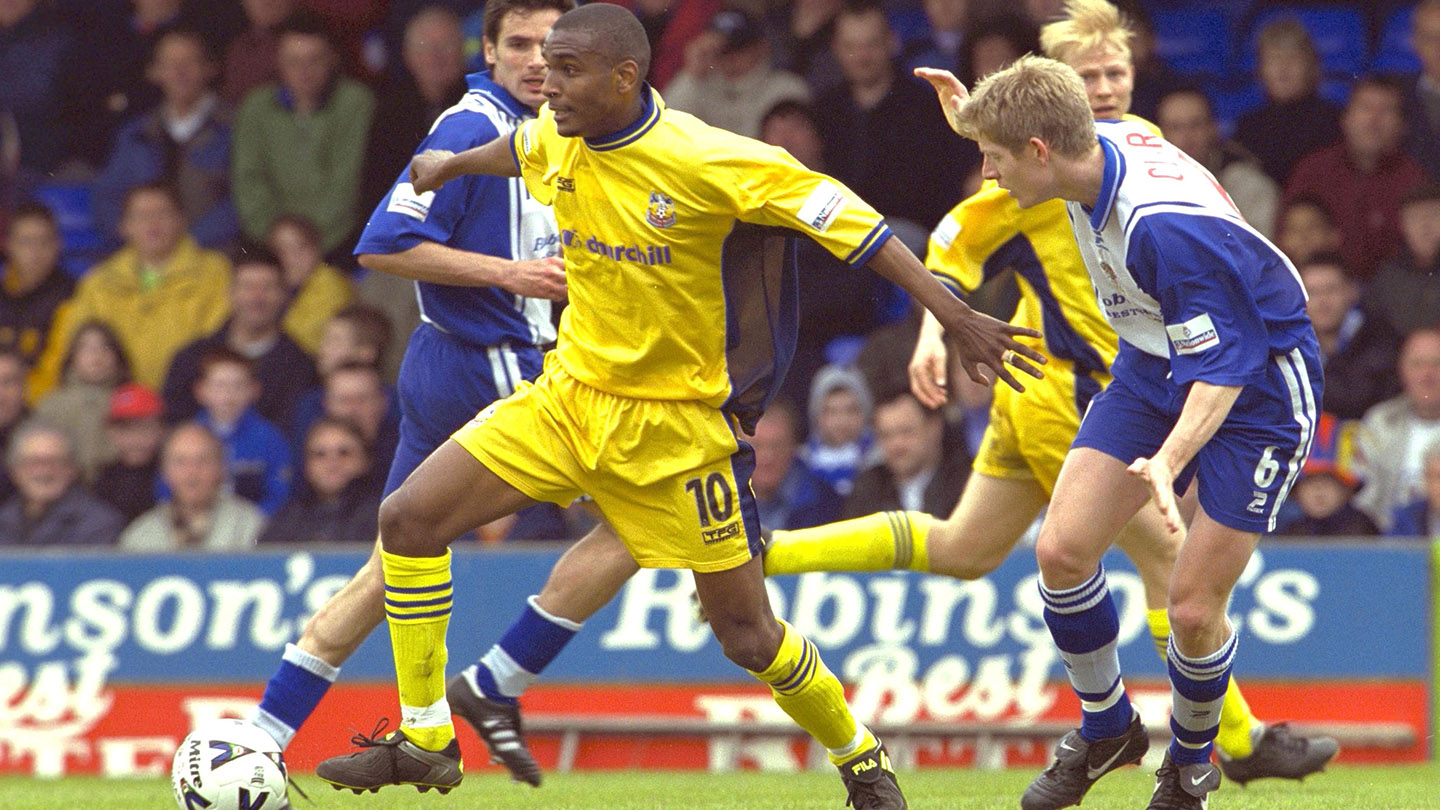 A heart in mouth moment for the visitors came early in the second-half as a long ball over the defence bounced past sweeper Hayden Mullins for Stockport striker Glynn Hurst to pounce on. But Latvian shot-stopper Aleksandrs Koļinko was alert and successfully charged out to win the ball back to maintain the Eagles’ hopes of staying up.

Five minutes into the second half, bandaged skipper Dean Austin flicked on a Steven Thomson corner into the path of Riihilahti on the edge of the six-yard box. The Finn was denied a second goal in successive games as his shot was cleared off the line by Stockport centre-half Peter Clark. The Eagles were getting closer and closer, as Kember’s half-time words started to have an effect.

On the hour mark, Palace dialled the pressure up. After Thomson dealt with a Stockport breakaway well, the Eagles charged towards the home goal. The Palace faithful in the Railway End were in full voice, urging the team on and appealing for penalties for a challenge on Forssell and a handball moments later from midfielder Colin Woodthorpe. The calls fell on deaf ears however as referee Tony Leake waved away the claims of fans and players alike.

Meanwhile, at Fratton Park, Portsmouth added to their lead against Barnsley, which meant they now had a better goal difference than Palace. Thankfully, Huddersfield were still trailing 2-1 to Birmingham City, which meant a Palace win would still be enough. 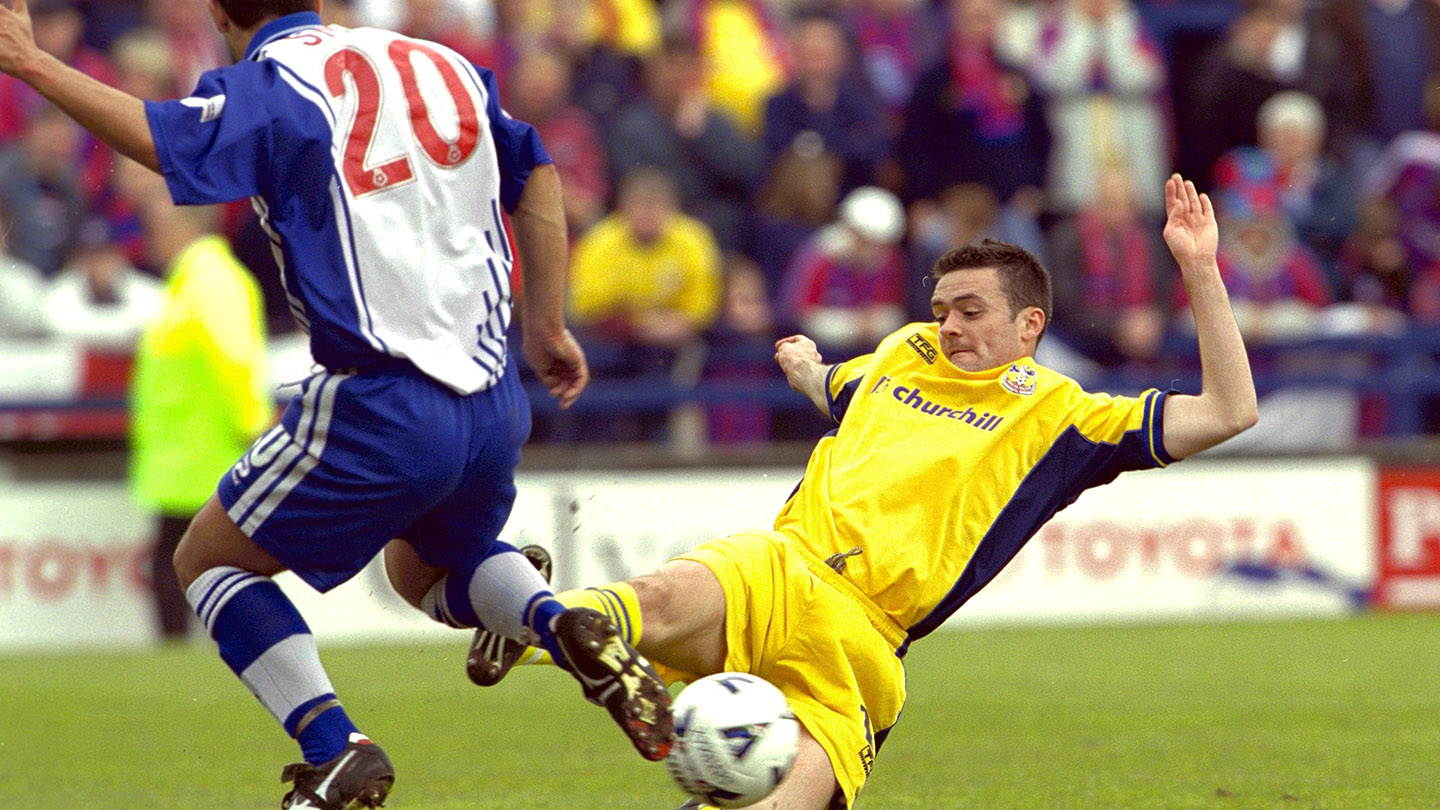 Hero of the 1997 play-off final David Hopkin entered the fray just after the hour mark in place of Carlisle, indicating a change of shape to 4-3-3 for the Eagles. He bolstered the midfield and was joined by Tommy Black, replacing Thomson, in the 75th-minute.

As it stood, with 10 minutes left on the clock, Crystal Palace occupied the final relegation place and were going down with Queens Park Rangers and Tranmere Rovers.

The Eagles kept pressing for a goal, and the 82nd-minute saw yet another penalty claim dismissed by the referee as Freedman’s ball into the box was blocked by Robert Clare’s hand.

With five minutes to go the Palace fans behind the goal in the Railway End prematurely jumped in celebration as Freedman’s shot from 20-yards out went agonisingly wide of the post.

Just over a minute later, the away end erupted once again. This time, it counted.

Mullins defended a Stockport throw into the Palace box which Hopkin cleared into Morrison’s path. He laid the ball off to the onrushing Freedman, who wrote himself into Palace folklore as he advanced into the box and dropped his shoulder to send Clare the wrong way before smashing the ball home past ‘keeper Lee Jones. 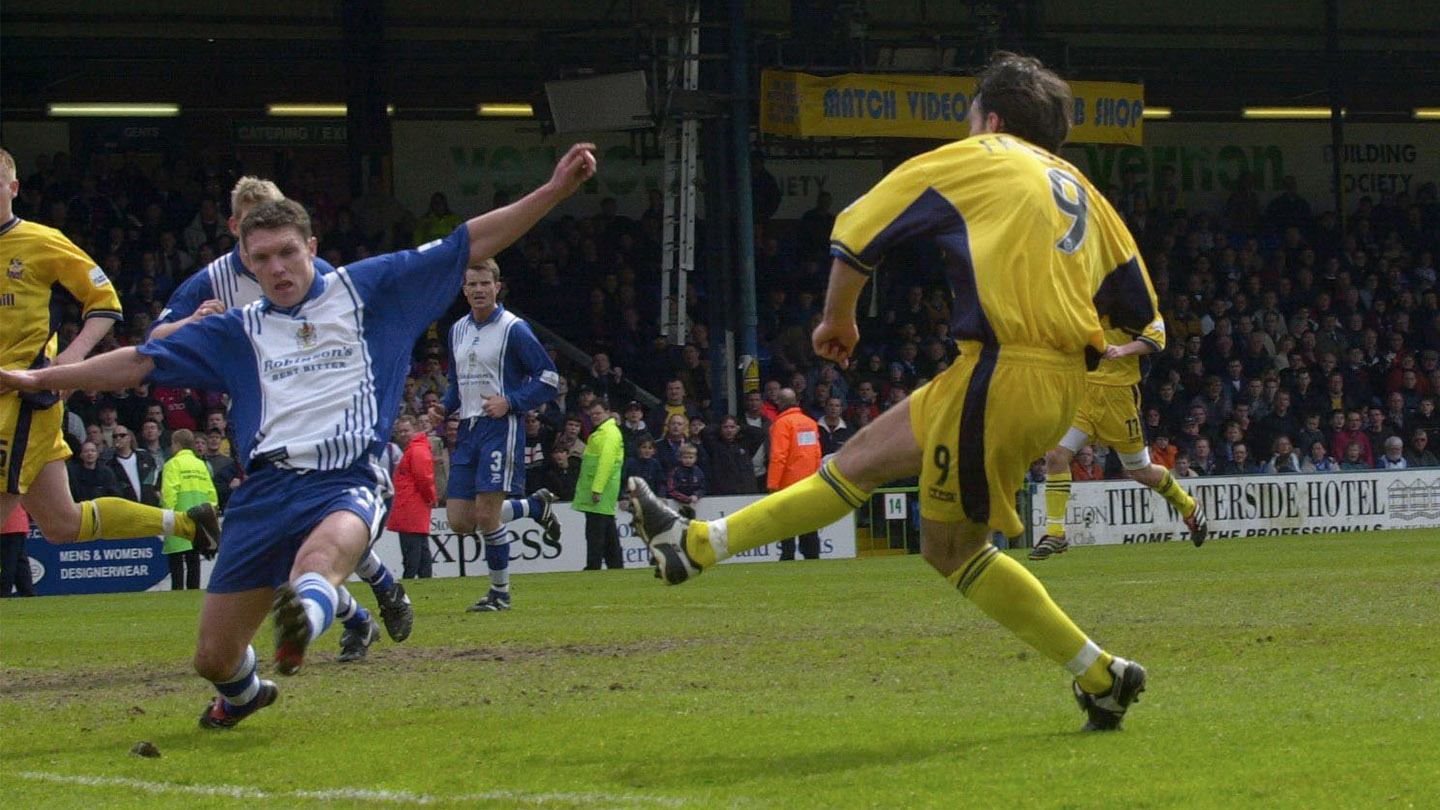 The Railway End erupted as supporters spilled out to mix with players: this was the moment the Eagles were waiting for. As it stood, they were safe in 21st place, at the expense of Huddersfield Town who were still trailing 2-1.

In typically dramatic fashion, Palace almost shot themselves in the foot moments before the final whistle. Jamie Smith headed on a long ball from Jones, Koļinko slipped when coming to claim it but just found his footing to prevent the ball from spiralling into the net. The five minutes of injury time were up as Koļinko cleared the ball, and the final whistle blew.

The Eagles had done all they could to survive and the travelling support again came spilling out onto the pitch in celebration. The emotions came pouring out, however the job wasn’t done yet.

The final whistle saw only one of the three clubs' fates confirmed. Portsmouth had won 3-0 against Barnsley and mathematically secured safety in Division One.

For Palace the wait went on. The jubilation at full-time was partially blighted by anxiety listening to the radio and phones to find out what was happening at the McAlpine Stadium, where there was nine minutes of injury time.

Almost four minutes after the final whistle blew at Edgeley Park, the news came through that Birmingham had won 2-1 at Huddersfield and condemned them to relegation. The Eagles were safe, and the celebrations began in earnest. 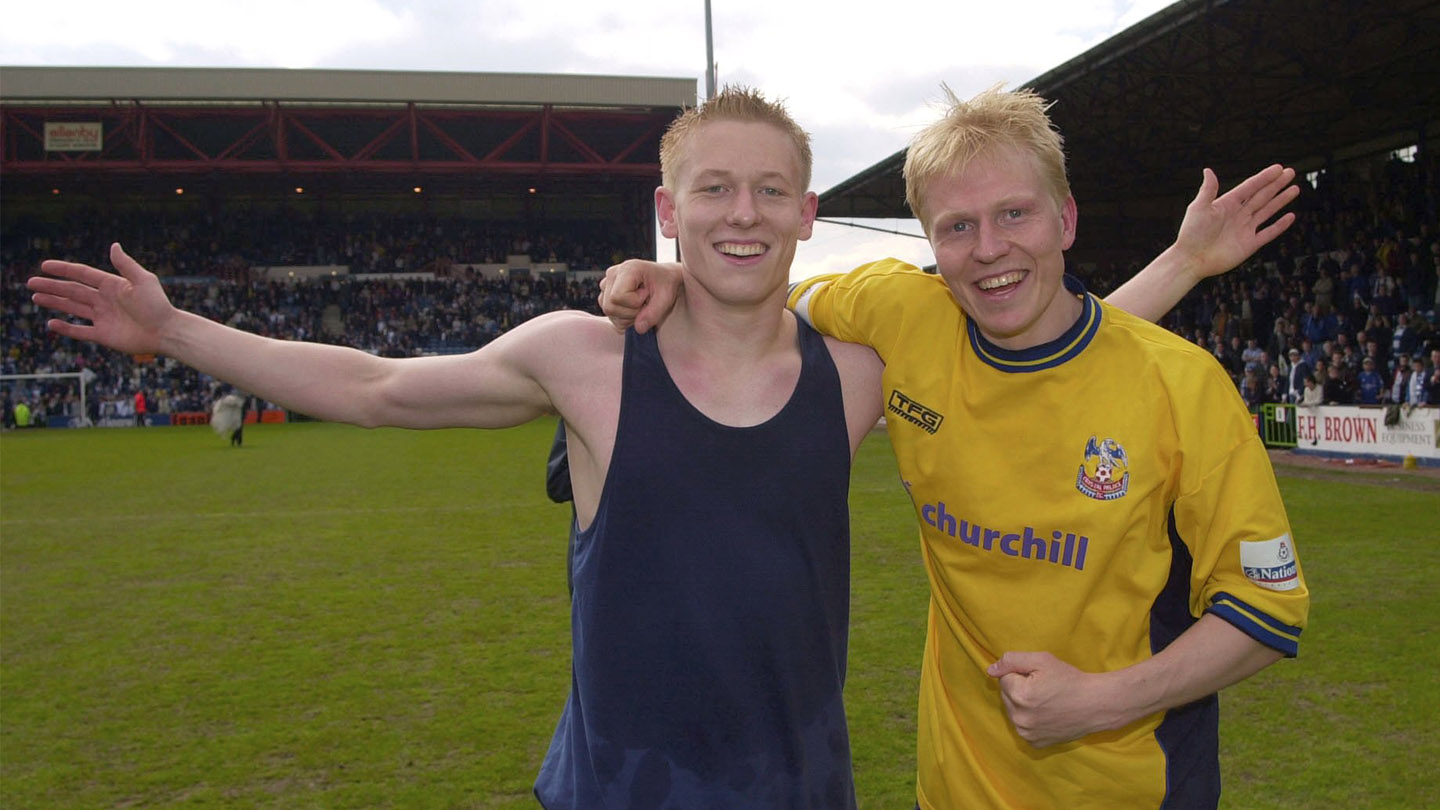 Amidst the celebrations in the dressing room manager Kember, celebrating with a cup of tea, shared his thoughts: “It’s probably just as good as getting promotion with Palace in ‘69 and ‘79. We set out to win the two games and it’s gone for us with the other results.”

Goalscorer Freedman added his words into the mix: “I've never scored a better goal than that. [It] keeps Palace in the First Division and it’s all thanks to all my teammates. Especially this man [Clinton Morrison].

“We wanted to stay up and we did stay up. We did it for each other."

Morrison duly returned Freedman’s words of praise: “Dougie's worked hard all season and I'm pleased for him that he's got the goal. It was a great goal and he’s just been different class over the last six or seven games so I’m just pleased to stay up and I love this club.

"I didn't think it was going to be our day, we were missing a lot of chances, but then [Dougie] Freedman popped up and put one away." 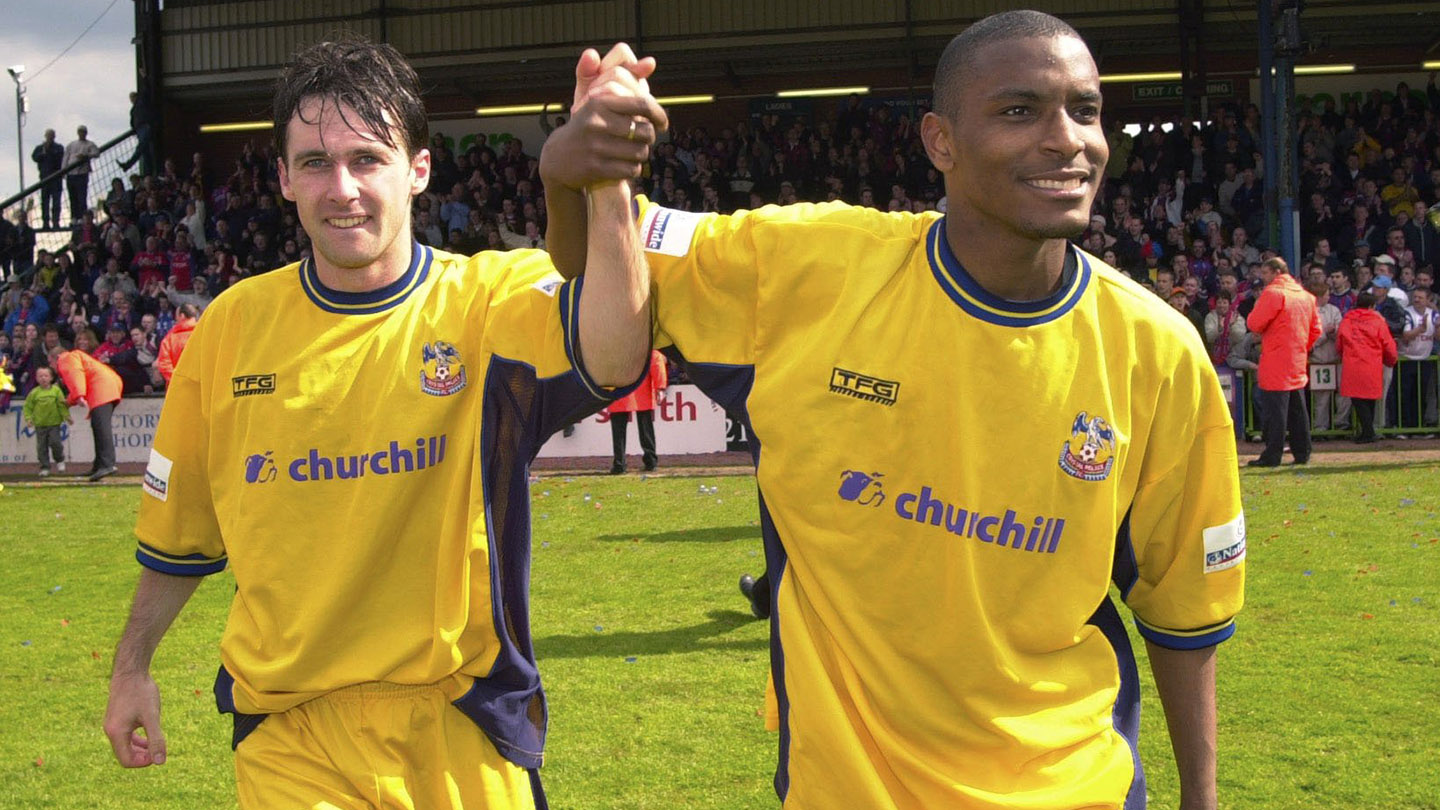 Chairman Simon Jordan added: “The most important issue is that we have stayed in Division One. We can now build on this.

"It has been bloody agony; I am just glad it is all over. We can have a good break and come back fitter and more focused."

The fans continued their joyous celebrations at Edgeley Park all the way down the M6 back to south London as the players and staff followed suit.

“We had a great trip back,” Kember recalled. “To Simon Jordan’s credit, he handed us some money and we stopped at the nearest off-licence and drove all the way back to High Wycombe. All the boys then came back to South Croydon and we went into a pub on Southbridge Road, The Star. We all had a few drinks and a singsong to celebrate.” 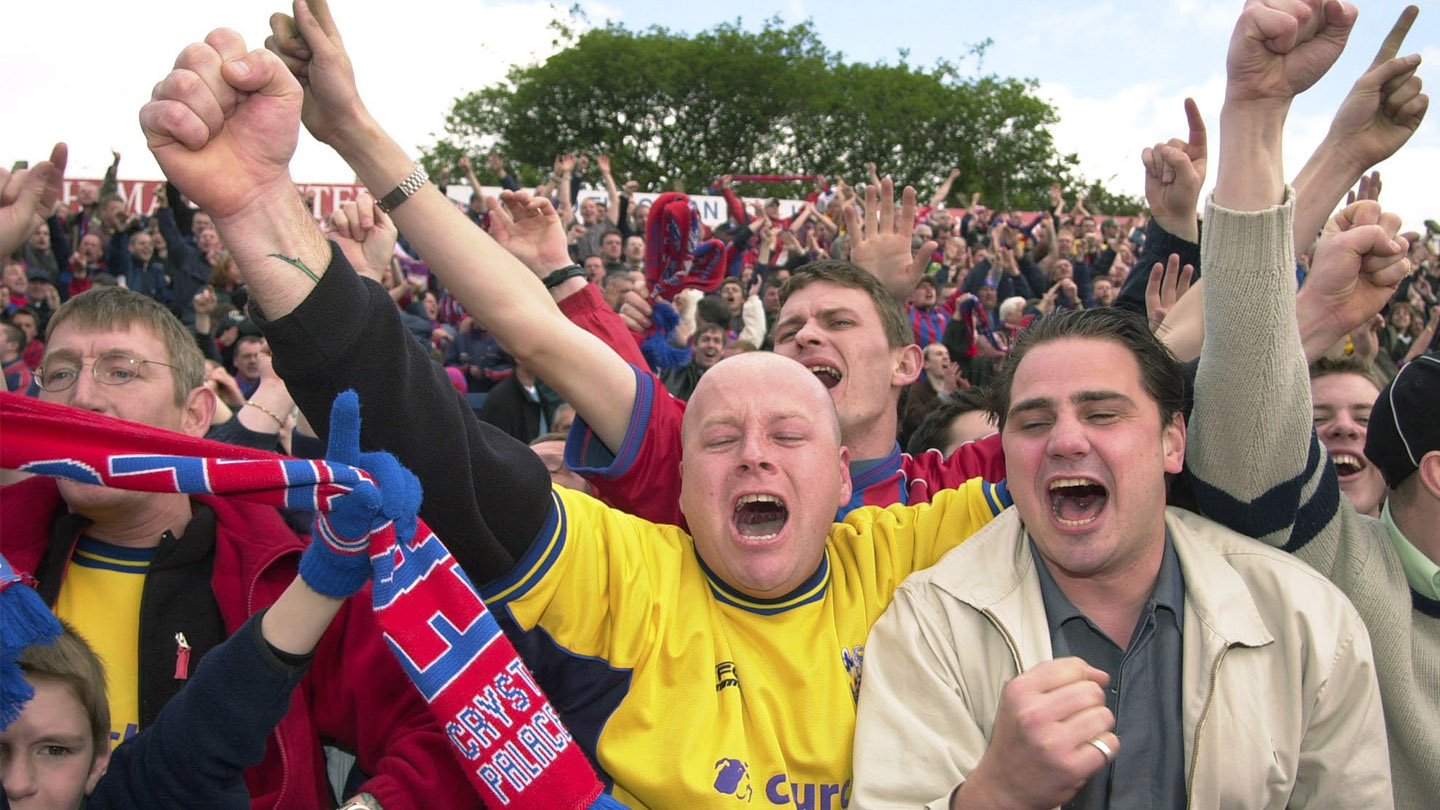 In the 20 years that followed since that remarkable day in Greater Manchester, it’s been a rollercoaster for the Eagles both on and off the pitch.

The two seasons following survival saw the club finish mid-table in Division One under manager Trevor Francis. Kember then resumed his former role to try his hand again in 2003.

“Simon [Jordan] had said I’d have a ‘job for life’ at Palace, and when he offered me the manager’s role on a permanent basis after covering Trevor [Francis’] departure, I thought: ‘Let’s give it a go,’” Kember said in 90+7.

A short spell for Kember as manager saw him replaced by former player Iain Dowie, who guided the club to Premier League promotion in 2003/04 season. The stay in the Premier League was brief for the Eagles as they returned to the Championship in the following season.

In 2012/13 the Eagles won the play-offs to secure promotion back to the Premier League, where they have been ever since.

The heroes of the game at Edgeley Park are still involved in football today, with Kember and Freedman both working for the club as chief scout and sporting director respectively.

The game against Stockport will live long in the memory of these players and the fans alike. It is forever written in Palace folklore, even 20 years on, its impact is still felt today.

READ NEXT: Value for money: How Coppell and Noades built Palace’s most successful squad