On Christmas Day 100 years ago, one of English football’s most notable rivalries began in earnest, as Crystal Palace faced Brighton & Hove Albion for the first time in the Football League.

Although they wouldn’t become fierce opponents until the 1970s, the Christmas encounters of 1920 marked the beginning of a long history between the two that has seen them face each other more than a hundred times since.

After becoming founders of the Third Division, Palace made an ignominious start to life in the Football League. The competition’s administrators had done them no favours in handing them an away match at Merthyr Town to start their league season.

Manager Edmund Goodman, in his 13th year at the club, took his team on the long journey to South Wales, but they were so badly delayed that the game had to be pushed back to a 5pm kick-off. The next 90 minutes were no better, and despite George Milligan registering Palace's first ever Football League goal, the Glaziers succumbed to a 2-1 defeat.

As the festive period drew in however, Palace were adjusting to their new environment. The traditional Christmas Day fixture approached, often followed by a reverse match a day or two later. For Palace, this meant a first Football League meeting with Brighton.

Incidentally, the two sides had met exactly a year earlier, their final meetings in the Southern League. Palace had done the double that year, and another set of Christmas clashes offered them the chance to do the same.

For the Glaziers, a Christmas away game was becoming something of a ritual. Despite being subleased from London, Brighton and South Coast Railways, the land their ground was built on belonged to the Church Commissioner, meaning no football could be played on Christmas Day or Good Friday; therefore, an away trip accompanied Christmas each year.

The Goldstone ground was then in its earliest iteration as former cattle-grazing land owned by Goldstone Farm. On one side of the pitch was a stand capable of holding almost 400 spectators – but far more turned up. 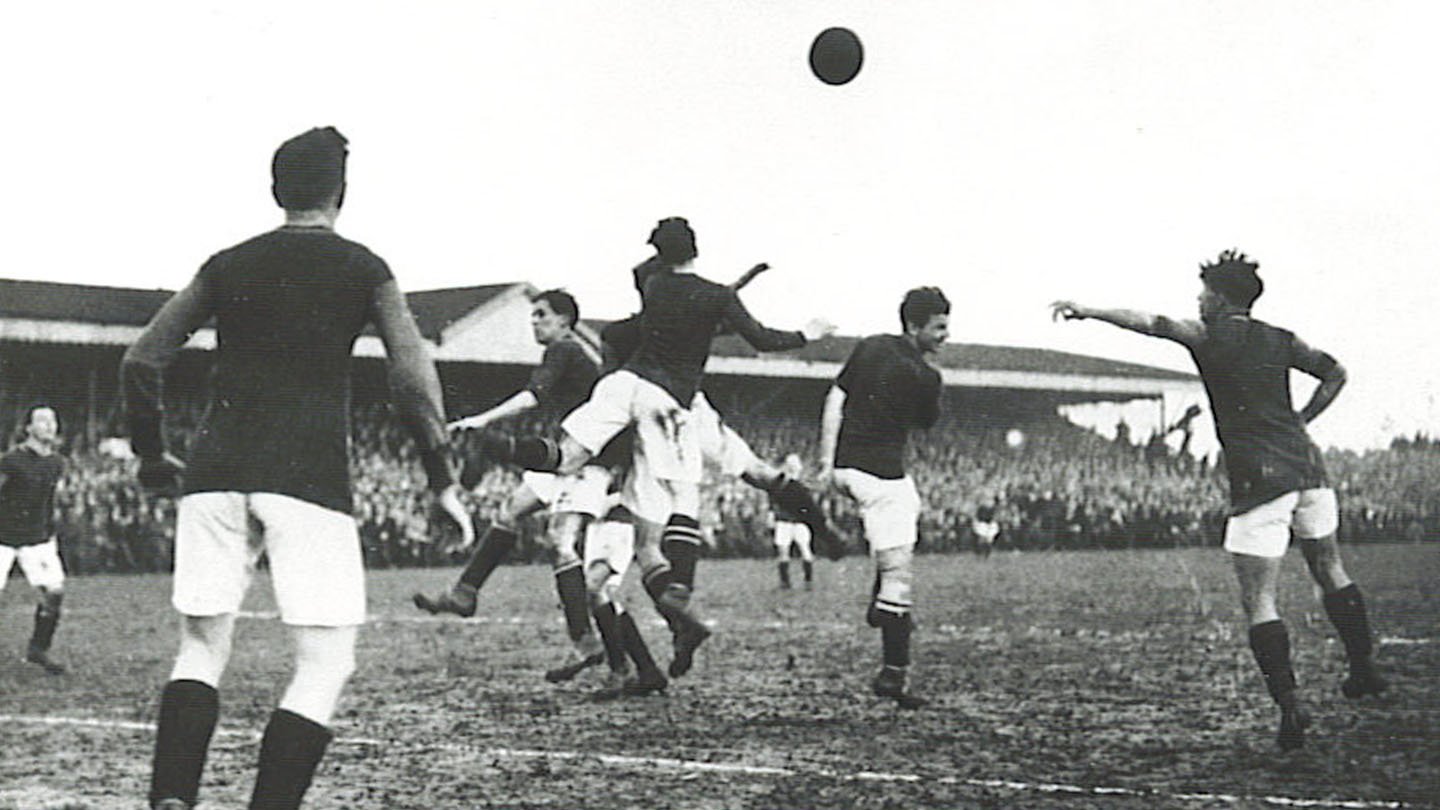 “A splendid crowd was present, and the weather was ideal,” wrote the newspaper report, with more than 14,000 people in attendance.

Both sides lined up in the conventional 2-3-5 formation. Brighton won the toss, and elected to kick-off with their backs to the December sun.

The hosts started as the better side, with Palace’s fierce defensive pair Ernie Rhodes and Jack Little preventing an opening goal. As Palace grew into the game, they poured forwards, with Sam Bates’ 25-yard effort cannoning off the crossbar.

The first-half ended goalless, but it was inevitable these sides’ first Football League bout should end in high drama, and so it was the case.

Disaster struck for Palace in the second-half, when centre-forward Edwin Smith was forced off with an injury - no substitutes were permitted to replace him.

Brighton took advantage of their superior numbers, and when Little fouled Brighton’s Ted Rogerson in the area, the referee awarded a penalty – but Jack Alderson saved brilliantly to keep the scores level.

Buoyed by their escape, 10-man Palace pushed forward, and with just five minutes left on the clock broke the deadlock. Sent clear down the wing by Albert Feebury, Alan Wood unleashed a perfect cross onto the head of Jack Conner.

Any touch would have made it 1-0, and that’s exactly what Conner provided.

“The Palace supporters, who were numerous, were in high glee” said the match report, “and the Palace players seemed to thrive on success, for instead of concentrating on defence, went all out to increase their lead.”

It was game over minutes later, as Conner got his second of the match to the delight of the travelling Palace crowd.

There was little time for Christmas celebration however, because just two days later Brighton arrived in south London for the reverse fixture.

By this time, Palace were settled into their new surroundings – in more sense than one. Having moved into their ground in Selhurst two years earlier, affectionately known as The Nest, they were welcoming teams to London from across southern England.

The ground, built on the former site of Selhurst Wood, was a basic affair, surrounded on each side by great banks of earth where spectators stood to watch Palace play. Topped with thick bushes, the make-do stands were known to supporters as 'The Jungle'. Due to the Church’s ownership, there was no betting nor the sale of alcohol within the ground, but almost 18,000 supporters attended nonetheless to see if Palace could repeat their double victory of the season before. 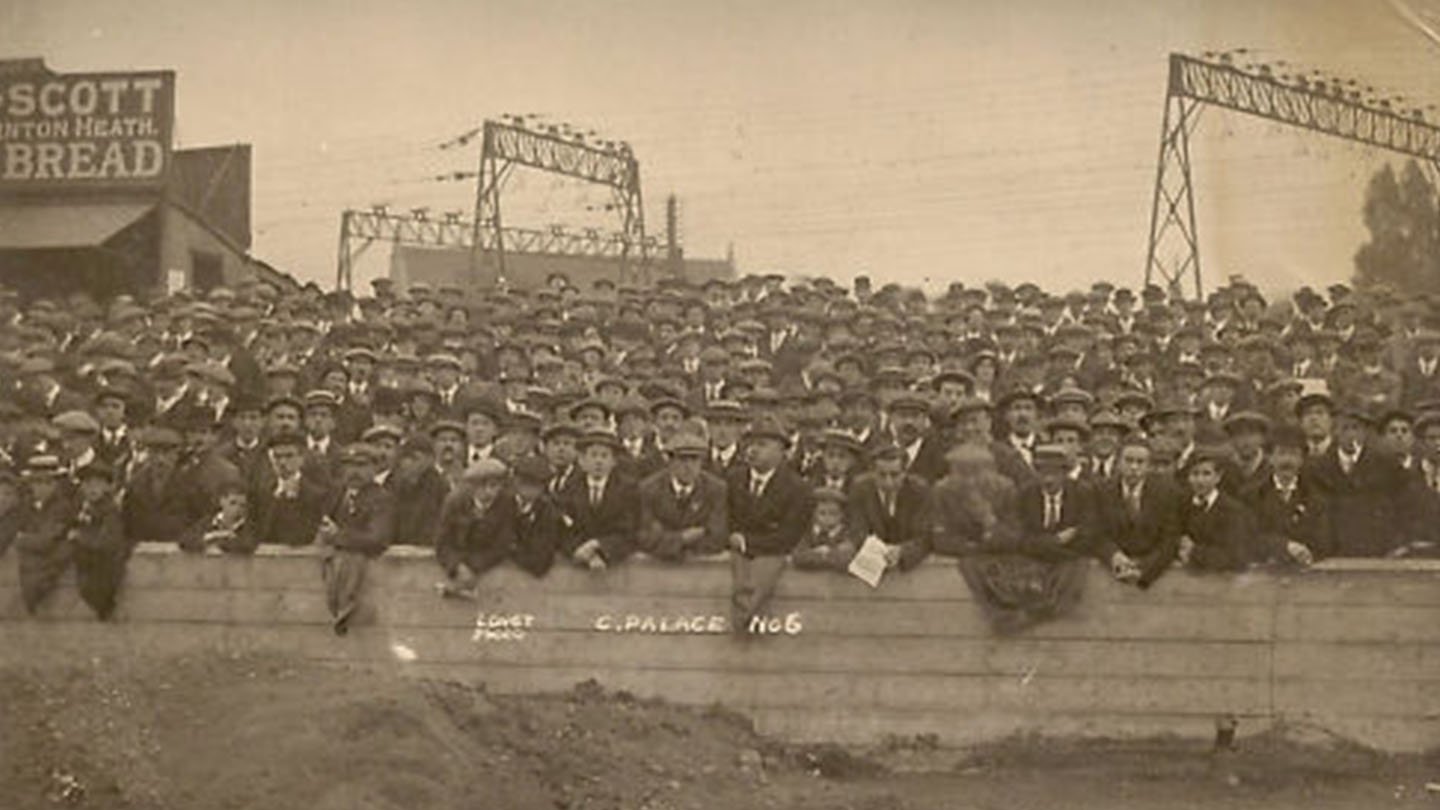 For spectators unable to pay the full cost of a match-ticket, there was an ingenious solution to avoid missing the game. Running adjacent to The Nest was Selhurst Station, where fans could stand on Platform One and watch the action, at a far cheaper price than normal admission.

Word of Palace’s Christmas Day exploits had spread – from Platform One and beyond.

“There is no doubt,” wrote the newspaper, “that the reports which the Palace supporters who went to Brighton on Christmas morning spread of their favourites’ famous victory…accounted for the large crowd at the Nest.”

Thousands poured into the ground in Selhurst.

“I was amazed to see how packed the ground was,” wrote one reporter. “Every available seat…was filled. An excited, expectant atmosphere was breathed by the 20,000 folk who lined the field.”

Determined to get revenge, Brighton started quickly once again. Palace sought to contain the threat: “a big clearance by Rhodes being cheerily welcomed.”

But they couldn’t hold out forever, and soon the visitors took the lead.

Palace’s response was emphatic. Two-goal hero of Christmas Day Conner was in the thick of the action, winning a penalty almost straight from kick-off.

“There were loud cheers as Ted Smith invited Feebury to take the penalty kick, and they rose to a roar of delight when the popular left-half banged the ball past Billy Hayes at a tremendous pace.” Just before half-time, Palace were level.

From kick-off Conner set off again, brought down by one Brighton tackle after another. Each time he attacked, the tackles became fiercer – “certain Brighton methods were calculated to lead to unpleasantness” – and soon he was forced to leave the field, receiving a piggy-back from the trainer.

After half-time, he reappeared with a huge bandage around his head, and immediately set about terrorising the Brighton defence once more. Sprinting forward, his shot came back off the crossbar and fell to a grateful Smith, who tapped it into the empty net.

The game seemed over; the points safe.

But even a hundred years ago controversial refereeing decisions were a part of the game. After an innocuous attack on the Palace goal, the whistle was blown. “To everyone’s amazement” wrote a reporter, “the referee again pointed to the penalty mark. The kick was delayed because of Conner’s persistence to know the why’s and wherefore’s [sic].”

Brighton converted to make it a tense final few moments, but Palace held on for another famous win.

The victory set the tone for the rest of Palace’s season, as they ended their first campaign in the Football League as Third Division champions. Brighton finished 18th.

Over the subsequent century, the two sides met twice more on Christmas Day, Palace winning once again during the Second World War in 1943, and Brighton coming out on top in 1951.

The rivalry has been played out 106 times since the crowds thronged into The Goldstone in Brighton on Christmas Day 1920, but one hundred years on we can look back on those first meetings as the birth of a special fixture in the English football pyramid.

Thanks to Club Historian Ian King for providing the 1920 newspaper accounts of the fixtures.