When Eagles Dare: Where are the key figures now?

A range of different players and staff feature across each episode - here’s everything you need to know about what’s happened since and where they are now.

Lifelong Palace fan and the leader of the CPFC 2010 consortium. He was installed as Chairman after saving the club from liquidation in 2010 and still continues in that role today. After previously having an equal 25% stake in the club, he is now the leading shareholder along with American investors Joshua Harris and David Blitzer.

Another lifelong Palace fan and member of the CPFC 2010 consortium which saved the club. He previously had a 25% stake in the club with other members of the consortium, though he now has a reduced stake and is still in the insurance business.

Member of the CPFC 2010 consortium who helped to save the club he supported his entire life. Previously had a 25% stake in the club, though this is now changed and he continues to work in the wine business.

Final member of the CPFC 2010 consortium and fan of the club. Also had a 25% stake in the club, though this has also changed. 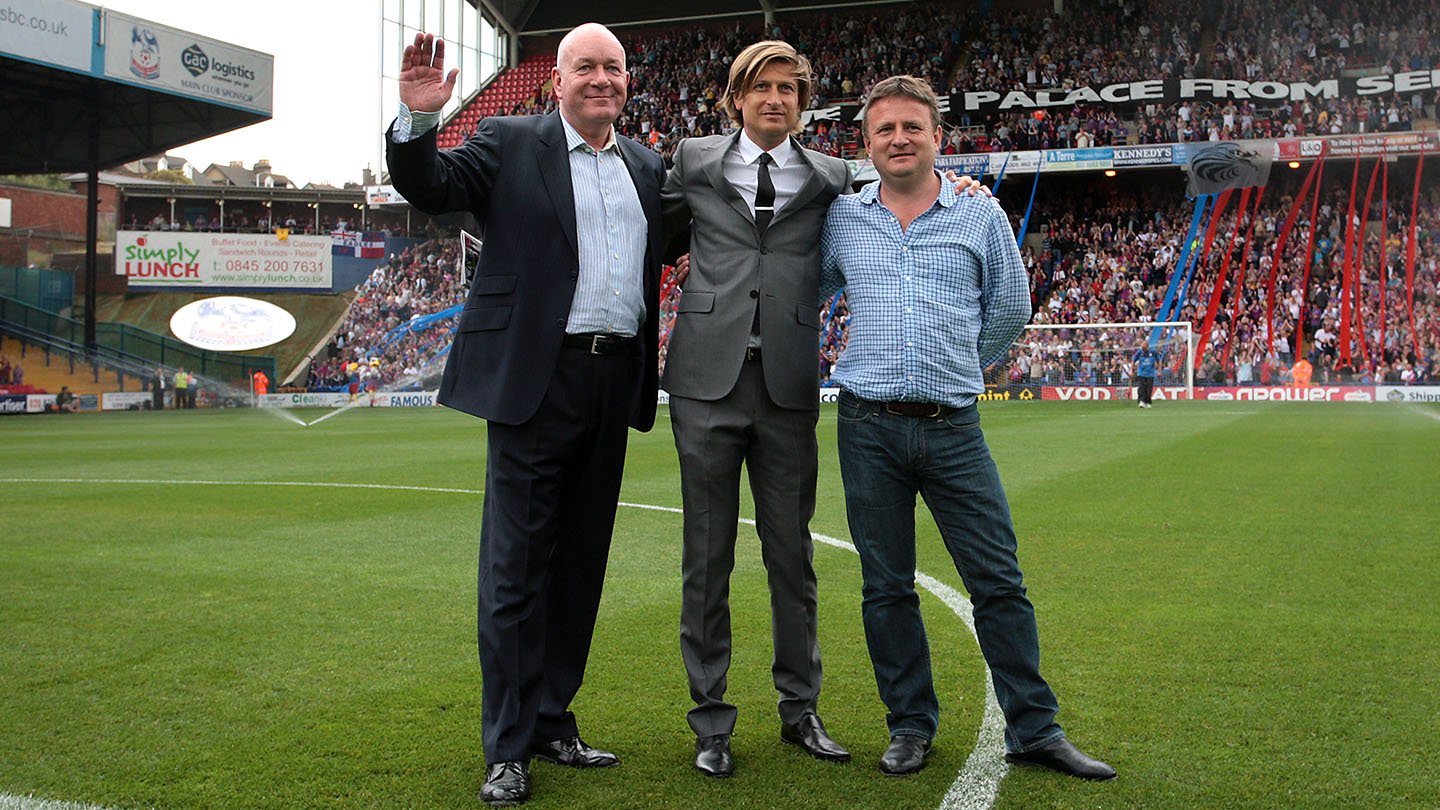 The legendary Scottish striker played 368 games for the club and scored 108 goals, including the iconic winner against Stockport County in 2001 to keep the club in the First Division. He rejoined Palace in 2010 as assistant manager after it went into administration, and later went on to become manager, as seen on When Eagles Dare.

After managerial stints at Bolton Wanderers and Nottingham Forest, Freedman returned to the club once more in 2017 as Sporting Director and continues in this role today.

After play-off success with the Eagles, Ian Holloway’s run as manager ended in the 2013/14 Premier League season. With only one win in eight games, he left the club by mutual consent and was replaced by Tony Pulis.

He has since gone on to manage Millwall, QPR and most recently Grimsby Town. Holloway also works as a pundit across different media outlets.

With a playing career spanning a number of clubs across League One, League Two and the Conference, Guyett joined the Eagles as a fitness coach in 2010. He has been at the club ever since and is now operating as the Head of Sports Science and Strength & Conditioning.

He's seen it all during his time at the club 🦅

The Palace legend was at the club from 2004-2019. He stayed through administration and was a constant presence in goal for over a decade. He was a fan favourite and was also the recipient of the Crystal Palace Player of the Season award on four occasions.

Speroni made 405 appearances for the Eagles before retiring in 2019.

The defender joined the club during the 2012/13 season and played a big part in helping secure promotion, most memorably when he headed the ball off the line in the play-off final. He has been at Palace ever since and has achieved almost 300 appearances, scoring five goals.

Though Ramage played a key role in getting the club promoted to the Premier League in 2012/13, he did not go on to play for Palace at the highest level. He was loaned out to Barnsley before leaving Selhurst Park to go to sides in India and Australia. The defender has since retired and is now coaching Newcastle United Under-23s.

The Irish centre-back stayed with the club after getting promoted and remained to have four successful seasons in the Premier League. He made 197 appearances for the Eagles in total, scoring seven times, and donned the armband on occasion.

After his contract expired in 2018, he returned to his boyhood club Cork City before retiring at Waterford in the Irish Premier Division.

After captaining the Eagles to promotion, and winning Player of the Season for the 12/13 season, the Australian midfielder stayed at the club for another three seasons in the Premier League.

He made 178 appearances in total for Palace, scoring 10 goals, before moving to Aston Villa in 2016. Jedinak retired at Villa in 2020 and is now a coach within their academy. He also played 79 times for Australia, captaining the side to victory in the Asian Cup in 2015.

Bolasie played a big part in Palace’s promotion in 2012/13 and was a mainstay in the team during the first three seasons back in the Premier League. The winger made 144 appearances for the Eagles in his four years at the club, scoring 13 times - including an 11-minute hat-trick against Sunderland.

He moved to Everton for a club-record fee at the start of the 2016/17 season and has been on their books ever since, though he has gone out on loan multiple times to Aston Villa, Anderlecht, Sporting Lisbon and most recently Middlesbrough.

A cult hero at Palace, affectionately known as ‘Joniesta’. The Academy graduate played a pivotal role in helping Palace secure promotion to the Premier League, winning the club’s Young Player of the Season award in 2012/13.

After promotion, Williams appeared just 12 times in the Premier League for the Eagles due to injuries. He went on loan to a number of clubs, including Ipswich Town three times, Milton Keynes Dons and Sunderland, before leaving to join Charlton in 2019. He is now playing for Cardiff City in his native Wales.

The Palace academy graduate secured a move to Manchester United halfway through the 2012/13 season, before being loaned back to the club to help achieve promotion.

After a half-season at Old Trafford and a brief loan to Cardiff, Zaha rejoined the Eagles in 2013/14 on loan before making the move back permanent. He has been at the club ever since and has amassed almost 400 appearances and 68 goals.

Though he injured his cruciate ligament in the play-off semi-finals, Murray scored a record-breaking 30 goals in the 2012/13 season to help the Eagles secure promotion and carried on with the club into the Premier League.

His return from injury saw him score eight goals in the top-flight before being loaned to Reading. 2015 saw Murray return to the south coast, initially to Bournemouth and then back to his former club Brighton & Hove Albion a year later.

After two loan spells at Watford and Nottingham Forest, Murray announced his retirement from football in May 2021 at the age of 37.

After scoring the penalty in the play-off final which saw Palace get promoted, Phillips signed a one-year contract with the Eagles to extend his stay with the club. He featured an additional five times during the first Premier League season back before he moved to Leicester City, where he retired to become a coach.

READ NEXT: When Eagles Dare explained: Delaney and Ramage's tears on the Wembley steps