Jack Butland: I was brought up to see everyone as equals

Jack Butland has dual responsibilities in his life as a footballer. The first is to train and compete to his maximum. The next, he feels, is to stand up for others and make himself heard. Here, the goalkeeper explains how moving to Palace has enabled him to thrive at both.

This interview originally featured in the Palace v West Ham matchday programme, and is republished below in full. You can order programmes by clicking here.

Jack Butland’s approach to balancing on- and off-pitch life is a mark of his commitment. “I’ve always been one where if I’m not playing I like to get my head down and focus on football,” he says.

“Some people have this great ability to do things alongside football and spend a lot of time campaigning. It’s always something I’ve had a great interest in but I always come back to football being the focus.”

While enjoying consistent minutes, Butland has been true to his word: the ‘keeper threw himself into off-pitch duties with England, visiting Auschwitz and writing about the experience for Holocaust Memorial Day, attending a youth centre, and regularly showing his support for those serving in the Armed Forces.

Personally or at club level, he has put his name to causes such as breast cancer awareness and HIV testing, donated to the GB women’s deaf football team and called or sent messages online to isolating Stoke City fans or key workers in the area.

But Butland has had his head down for the last year, joining Palace in October 2020 to find “a fresh beginning.” Now, he says, he feels “absolutely settled,” and has begun to use his position to benefit the club – on and off the pitch.

“What motivated me?” Butland asks rhetorically of his recent call with Palace Women’s Chloe Morgan where, rather uniquely for a current Premier League player, he spoke about addressing LGBT+-inclusion in sport.

“Just doing the right thing, really. It’s not a topic I’ve ever shone away from but neither have I ever really thrown myself into it. 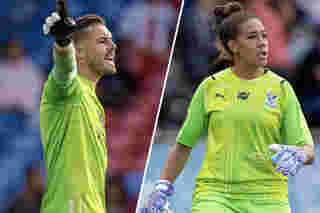 “Sometimes there are uncomfortable discussions to have but I think they’re the most important. I was keen to be a part of it and it’s something I think unless more and more of us start to do we become a part of the problem, or are playing for the wrong side with helping members of the LGBTQ+ community out. It’s important everyone opens up and at some point feels uncomfortable to speak about it. I’m glad I did.”

As he said at the time, Butland feels the first professional male player to come out during their career will be football’s turning point, and it’s a moment he hopes players like him can help to accelerate:

“This topic in particular has been around for decades and will continue to be around and it affects a hell of a lot of people… Ultimately it comes down to the rest of the football world to make it easier for someone.

Sometimes there are uncomfortable discussions to have but I think they’re the most important.

“That first individual that does believe they want to come out, be open and find the environment comfortable enough will be very important. But it’s going to take a lot of work from players, clubs and fans to finally give someone that confidence to do so.

“We’re all friends with people of different backgrounds, religions, races, sexual orientations. It’s around us, it’s nothing new.

But there is a balance to strike for professional footballers: ensuring their career and sporting ability remains on track while speaking about issues close to their hearts. It’s a skill players like Marcus Rashford have mastered, with the forward netting 45 times since starting his public charity work in October 2019.

Butland’s approach has historically been to keep his head down until he could guarantee form, but now with a base as strong as his at Palace, the goalkeeper may feel those shackles loosening regardless of his time on the pitch.

“I perhaps need a little bit more, because I do feel I have opinions and can help. I know when I’m not playing social media becomes an enemy; I don’t need it, I just want to get my head down and perhaps don’t do as much campaigning as I may want. We often want to focus our energy in what directly affects us.

The benefit for the team at that point was me not playing. That was the hardest thing for me to swallow.

“But everyone has an opportunity to do the right thing, to set an example, to nip things in the bud if you see or witness them and to welcome people with open arms that feel discriminated against or uncomfortable. I certainly feel I’m one of those people.

“I didn’t come from a particularly diverse background. The school I went to was not massively diverse in Clevedon, just outside Bristol. I never grew up in such a diverse place as south London but I always feel I’ve treated people the same.

“It’s just the way I’ve been brought up, to see everyone as equals, to help out, to support people. I’m not going to understand the deep-rooted stories of some others who’ve been through hell, but I can try my best to.”

And so, with that attitude, Butland has also more recently spoken about his professional struggles at Stoke City; not as a campaigner or with much fuss, but as honestly and clearly as he did about inclusion.

He’s refreshingly open without any melodrama: “The end to my time at Stoke was the first time I’ve really ever experienced a loss of form.

“It became quite an important learning curve for me. It took a lot of time and a lot of battling and got me quite down because I didn’t believe I had changed anything.

“How you channel that confidence when you’re not performing well can become quite arrogant... That was a struggle, like I was trying to wheel myself through the difficult times.

“When I ended up not playing towards the end of that season [2019/20] I needed to… It was frustrating as hell - I hated every minute of not playing - but the benefit for the team at that point was me not playing. That was the hardest thing for me to swallow.

“During those months I ended up joining Palace it just occurred to me: I’ll always have the talent and ability - I still do - but I’d forgotten to believe in myself, had got myself in a spiral of not believing what was going on, not wanting to accept I wasn’t playing well.

“In the end it took a change – coming to Palace… Now as a person and as a player I’m better for it, understanding myself a bit more and learning a bit of patience and just how powerful the mind can be. Now I feel back to my 18-year-old self; yeah, I’ve got a few more grey hairs than I did but I’m certainly as capable as I’ve ever been. I feel great.”

The challenge for a supporting goalkeeper, however, never alters: they must prove their form without playing. Butland concedes that life fighting for a single place has its frustrations, but makes clear he’s adopted the role with as much vigour as any – and, as his volunteered ending to this interview shows – he’s embraced life on-pitch as much as off-pitch at Palace. Just like you’d expect him to:

“It’s difficult to show to outside of our little bubble because I haven’t played many games, but from the minute I came in I feel like I’ve been back to my best. I’ve joined a club where Vicente [Guaita] has also been at a fantastic level, so I always knew I’d always have to be patient, to work hard.

“I know what being a goalkeeper’s all about – sometimes things happen and you’re in quickly, sometimes you’ve got to sit around and be patient. I’ve been on both sides of the spectrum.

“You get older, you mature and I’m not stupid – I can look ahead and I can see when people are doing well, and see when you’ve got to be patient. Of course there are frustrations because you want to play.

“What’s been massive for me which I’ve relied on is just patience, being patient, which is a very difficult thing to do. I feel I’ve got a lot to offer the team and we’ve got an extremely good group of goalkeepers pushing each other and that’s great for the club.

“Thank you to all the supporters who’ve been great from the minute I arrived. Despite not playing as much they’ve been great. The atmosphere around Selhurst Park, especially during this season, has been something I’ve never experienced. The one that stands out to me was the 3-0 home game against Tottenham, it was one of the loudest I’ve witnessed a Premier League stadium and it was a pleasure to see.

“Long may it continue.”