Conor Gallagher says Crystal Palace deserved the three points after their performance against Leeds United at Selhurst Park, but that there are still positives to take into the weekend’s trip to Southampton.

“I’m gutted really,” he told Palace TV after the goalless draw. “I felt like we deserved the three points. It was a bit of a crazy game – a bit like a basketball game to be honest.

“That can happen against Leeds, they are that type of team. We had chances to win the game. I had a few chances, and I was disappointed I didn’t score.

“In the end we are disappointed, but the gaffer has said that he’s happy with the performance. It was a good performance, but we want to be winning games like that.”

In what was at times a bruising encounter for both sides, Gallagher says the defensive performance was something Palace can build on. 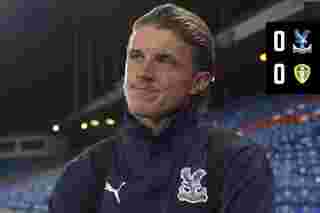 “It was physical – like I say it was like a basketball match, running up and down the pitch,” he said. “One of them where we’re just a bit disappointed we didn’t come away with the win.”

“I feel like that’s why I had a few chances in this game, because of that. I’m disappointed I couldn’t put one of them away. Another day I hit a cleaner strike and it goes in. It wasn’t meant to be today.

“We were defensively pretty good – they didn’t have many chances I can think of at all. That’s a positive. Credit for us defensively to keep the clean sheet. They didn’t really have any chances.

“There’s definitely confidence to take from it and to build on for the next game.”