“Complacency is not a word part of his vocabulary,” Jack Butland says of Patrick Vieira, hinting at Crystal Palace’s approach to training this week. “And he’s ensuring it’s not one of ours.”

“It’s important we continue to push,” Butland says. “We’re not the finished article, we’re not a group that’s done yet. He [Vieira] is keen to make sure we don’t forget that. He keeps us grounded, he keeps us humble, he keeps pushing us, that’s for sure.

“It’s been a very enjoyable year, one we’re not dwelling on. We want to achieve more. We’ve got goals from much bigger things. We want to go and win the semi-final, keep pushing in the league and go as far as we can. We’ve got no ceiling at the minute.”

Butland was talking with the FA’s matchday programme for Sunday’s semi-final, which you can purchase here. He was discussing a competition which has shaped his season at Palace, playing in all four rounds and conceding just twice.

It didn’t start how Butland would have wanted, with what he calls “a defensive mishap, if you like,” but went on to result in two crucial clean sheets, victory against his former side and a 4-0 triumph to book a semi-final berth. 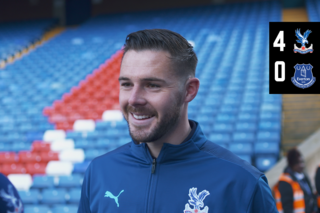 It’s been quite the journey for our No.1. Here, he breaks down the key games:

“The Millwall game turned out to be a great one. It was a hell of an atmosphere on the day – obviously it’s been a long time since Palace and Millwall met in a competitive fixture.

“It was an incredible occasion. We took an incredible following as we do everywhere we go, and you combine that with the Millwall fans and it was a hell of an atmosphere. The first-half didn’t go particularly to plan, we didn’t play particularly well.

“Michael Olise, the way he turned it on in that second-half and kind of singlehandedly got us back in the tie – it turned out to be a very enjoyable day. One that didn’t start too well but started a great run for us. I was pleased to be able to offer a little bit more of an assured performance in the game after that.

“I was excited [to face Stoke]. I was looking forward to playing them… [it is] a club I spent so long at and share so many fond memories with, difficult times and a club I have a lot of love for. I wanted to put in a good performance and ultimately knock them out of the cup.

“In the end we got it done. It took a while – they put up a great defence and we managed to get a winner late on. But it was the first time I’ve faced Stoke since leaving and it obviously ended up well for us in the end.

“You get to this stage of a competition where it’s littered with the big guns that have got through. We’ve got Chelsea in the semi-final at Wembley, which is an incredible occasion for us personally as players but as a club as well. It’s going to be a hell of a day out.

“For me to come off the back of some great performances and really enjoyable games for the club, both in the league and in the cup, it comes at a great time. I’m really excited for what Sunday brings.”

Butland’s last visit to Wembley came in 2018 when England drew 1-1 with Italy. He said he’s not “been part of a cup run that got you excited enough” until this season, but eagerly awaits his return to HA9.

“It’s a hell of a stadium which I know is going to be rocking. I think for us we’re going to sell out a portion of Wembley that supersedes Selhurst Park, so we’re going to take an incredible following with us. I’m really excited to see that, to hear that. I know it’s going to be special – when the Palace fans travel they do it properly.

“The first real taste of it for me was beating Tottenham at home 3-0 before Christmas, and it was as loud a stadium and atmosphere and sound and noise that I’ve ever heard at a football stadium. So I know what they’re capable of doing.

“We see it regularly and they give us that extra boost we need. A lot of the time it doesn’t take a goal to get them going; they do that on their own. When you’ve got a fanbase like that it’s difficult not to get up for it.”