Vieira: Players were unhappy with Newcastle start and want to respond

Patrick Vieira said his Crystal Palace players were disappointed with their start against Newcastle United but that they matched the Magpies in the second-half and are determined to end the season strongly.

Speaking before facing Leeds United on Monday night, Vieira had just two days to reflect on the Newcastle clash. He said the players were as frustrated as he was, explaining: "I think they know themselves that, especially in the first-half against Newcastle, we didn’t start the game in the right way. Then after we were much better in the second-half, with more determination and more togetherness.

"We matched Newcastle’s level of competitiveness. The team and players themselves were not happy with the way we started. We have to start in a different way and keep that for 95 minutes. 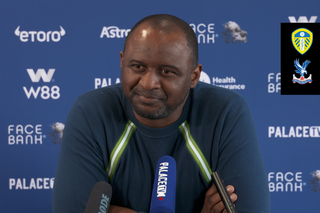 "I think this is the Premier League. It’s about trying to be consistent in the performance and results."

But Vieira didn't dwell on a frustrating evening, instead turning his attention to how Palace fight back to regain their recent form.

"We had some ups and downs during the season and always managed to bounce back, find a way to play better and win football matches," he said. "Lately, yes, the results weren’t what we expected but when you look at the performances we had some really good periods.

"But it wasn’t good enough. We have to play better, have to play more together as a team for the 95 minutes to allow ourselves more chances of winning.

"We don’t have doubt and I don’t have any doubt about the atmosphere when we play at home. The fans will be there to give us what we need to perform but the fans can only do one half of the work. We have to do the other half, go on the field with that desire and competitiveness that we know we can develop and that will allow us more chances of winning."

Finally, when Palace host Leeds at Selhurst Vieira will be facing a former opposite number from America, Jesse Marsch.

He gave his view on the Whites' play currently, on the pair's shared experience of moving from Major League Soccer to the Premier League via Europe.

"It’s a good side. This is a team who, like the majority of the teams in the Premier League, play with a lot of energy, have pace, a new manager with a different philosophy and they’ve been doing well. We’re expecting a challenging game."

"It depends on what is on the table," Vieira said of their career choices, "the offers you have. It’s about the individual and how you want to progress, how you see yourself and the next step you need. For me in the MLS and having the dream to come to the Premier the step between, Nice, was a really good experience."