Eberechi Eze told Palace TV that Crystal Palace need to replicate a “fun” performance against Montpellier when they open the Premier League at home to Arsenal.

The Palace midfielder bagged an audacious assist for Wilfried Zaha’s first goal against the Ligue 1 side in a 4-2 win, flicking the ball around his marker and starting a counter-attack.

“I haven’t seen it back yet,” he said post-match. “It was fun today, we played well and that’s the type of performance we need to put in for the game on Friday, which is the important one.

“It’s been fun, playing in [centre] midfield. I played there a few times and it’s where you can get on the ball, play and get touches on the ball. That’s what I want to do.”

The Montpellier match gave Palace a chance to field a full-strength team allow summer signings like Cheick Doucouré and Chris Richards to meet the fans.

Eze played much of pre-season alongside Doucouré and Jeffrey Schlupp, and said he’s glad of the time spent cementing their relationship.

He said: “I think playing with them is good, we’re building the connection and learning how to play with each other, which is important for the season. 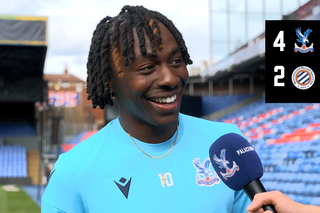 “We were talking about it, we can gel and get as many minutes with each other. That will serve us well going into the season.”

On Doucouré specifically he added: “He’s a quality player. On the ball he’s comfortable, he works hard, defends, wins the ball back and is definitely an important player for us.”