Jeffrey Schlupp blamed a “sloppy” start to the second-half for Crystal Palace only taking a point against Burnley on Saturday afternoon.

The Palace man played high up the pitch against the Clarets and managed to score after just nine minutes, stretching to turn home a Michael Olise cross.

His effort put Palace in control, and the south Londoners looked bright and dominant throughout the first-half. But, he says, they “started the second-half really sloppy,” which allowed Burnley to pull level after less than a minute.

Speaking with the press post-match, Schlupp said: “We went 1-0 up in the first-half and started the second-half really sloppy. They scored the goal and I thought it was a bit of a scrappy game in the end and a well-earned point.” 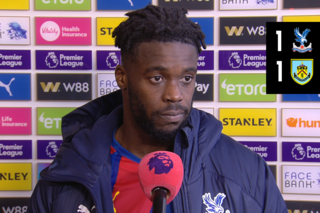 Asked what he thought Palace did well, and what they should or could have done better, Schlupp suggested capitalising on their first 45 was key.

“I thought we started well,” he reflected. “We started on the front foot, had a couple of half-chances, some good moments and managed to get the goal we wanted. I think we probably needed to try and kill the game off in the first-half, to be honest.

“We worked so hard for it in the first-half and to come out and start the second-half the way we did is not acceptable. We got punished straight await. We know what the Premier League is like and what Burnley are going to bring and they came up for it and it was a good battle in the end.”