Palace are unbeaten in five straight league games, scoring 10 goals and taking points from both Manchester City and Arsenal.

In all competitions they’ve kept four consecutive clean sheets and are looking confident as they prepare for the FA Cup semi-final against Chelsea.

They have eight crucial league games left as they seek to cement their place in the top 10 for the first time since 2014/15, and Fantasy Football managers have eight crucial gameweeks left to claim top spot in those all-important leagues.

With Palace’s current form and what’s at stake for the end of their season, managers may be well-placed opting for members of Patrick Vieira’s squad to maximise the run-in.

Here are the key considerations.

His form (a player’s average score per match over the last 30 days) is currently 10.5, behind only Manchester City’s Kevin De Bruyne on 10.7. (Sustaining 10.5 points per game this season would sit Andersen as easily the best performing player in the entire league.)

De Bruyne has bagged three goals and an assist in his last three, so is incredibly tough to beat. But Andersen’s clean sheet hat-trick and pair of assists, coupled with a very healthy three bonus points against the Gunners, sees him only slightly behind the City talisman.

More widely, Andersen has collected 94 points so far this season, the third-best performing Palace defender (behind Tyrick Mitchell on 97 and Marc Guéhi on 96).

All three cost the same (£4.5m) and rank among the top 25 defenders in the game. Andersen may prove to be the best choice for the run-in, however, with his eye for a defence-splitting pass most keenly displayed against Arsenal and no doubt required for future matches.

Overall in the form table, Palace have five players in the top 21: Andersen, Vicente Guaita, Mitchell, Guéhi and Nathaniel Clyne. 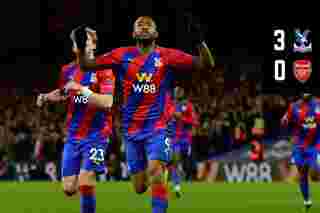 Palace’s defensive solidity has been one of the key takeaways from the last few months. The team has shown itself to be more than capable of quieting the league’s biggest names, shutting-out City and Arsenal and keeping Wolves at bay before holding Everton in the cup.

They could well continue this in upcoming games with Leicester City, Newcastle United, Leeds United, Southampton, Watford, Aston Villa and Everton – all teams in the bottom 10. All of these sides bar Leicester have scored fewer goals than the Eagles and none of them have a better defensive record.

Crucially, keeping all of the above in mind, Palace players are incredibly under-picked in this season’s Fantasy Premier League.

The player appearing in most teams is Conor Gallagher. But even with 126 points and costing just £6.1m Gallagher has been selected by only 12.4% of teams, with 29 players more widely included than him (the midfielder is the 19th-best performing player in the league).

Guaita is the next-most selected player with 5.9% of teams featuring the Spaniard, and Wilfried Zaha comes third in 4.8%.

Again, your smartest options are to go with Palace’s defence. Mitchell, our third-best performing player, has been picked by just 1.3% of users. By contrast, 17.2% of players fielded Tyrick in September 2020. Guéhi and Andersen, despite their form discussed above, are selected by only 1.4% and 0.5% respectively.

Turning attention back to form, Clyne and Cheikhou Kouyaté are even more impactful: selected by 0.1% and 0.5% of teams despite having a form score of 6 and 5.5.

Each of these points means picking a Palace player could make the difference as the season draws to a close: so few teams have many of them that your points won’t be offset in the same way Mo Salah (61.1%) and Trent Alexander-Arnold (38.8%) managers are.