Right-back Joel Ward filled in at both left-back and centre-back in Crystal Palace's win over Watford – and still helped his side keep a clean sheet.

It was the team's fifth from five in all competitions at home, and saw them earn a fourth consecutive home clean sheet in the Premier League – a club first.

Ward has long been able to play across the backline, and told Palace TV he finds the transition relatively straightforward given the calibre of his teammates.

"Obviously I’ve played there [left-back] before a few times," he said, "but I think regardless of wherever I am on the pitch I give a good account and 100% and perform to the best of my abilities.

"When I was younger I played there [centre-back] a lot, coming up through schoolboys and scholarship. Moving positions you have to rejig your thought process and positioning, but once you’re in there and playing alongside the lads we’ve got it’s a smooth transition." 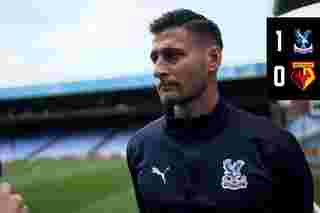 Turning his attention to the wider Hornets game, Ward said he felt it "wasn’t a pretty performance" but that "we got the job done."

He suggested the team could have won by a larger margin had they capitalised on a few more opportunities, and that this is a collective target well within their reach.

"I think that’s probably been the case in a few games this season [wanting to win by more]. But we’re working towards improving. I think at times we could just be a little bit more clinical and as a team we’ve been very solid, we’ve been compact and allowed ourselves to threaten other teams. Now it’s just being ruthless and making it count.

"However you look at it you give yourself that chance and we have got the threat and ability and firepower to win games. From our point of view, the whole squad and team are working together and getting stronger. We’re building that foundation to kick on."