Milivojevic opens up on ‘difficult’ start to season

Crystal Palace captain Luka Milivojevic has spoken openly about a ‘strange’ period in his career after a series of challenges in recent months.

“It’s been a very strange season for me, honestly,” he told Premier League Productions, after starting eight games so far this season. “I missed a lot of pre-season. I missed [lost] my father at the beginning of the season.

“It was a very difficult and strange situation for me. I tried to put myself in the best shape and the best way for the team. I’m trying honestly to be focused. I’m always there for the team.

“At the minute, the manager is using other players. As a captain, when you go through difficult situations you need to be strong enough and show an example for the other boys. They are looking at you.

“It’s important because in the future someone else could be in a similar position to myself at the moment. So in my head, it is to do every single training [session] properly, do my best and give a good example to my teammates, because I have to be the first one to give a good example, especially in tough moments.”

Unable to take part in much of pre-season, Milivojevic understands his lack of action this season, but is determined to stay professional.

“I’m always trying to be very realistic to myself,” he explained. “Almost nine seasons in a row, I have played constantly: over 30 games per season. I was thankful for being healthy and not having injuries.

“Playing constantly, I know how difficult it is for players to miss pre-season. I also didn’t have luck: I twice had injuries, one during pre-season which took me almost two weeks out of training, and the other one a bad kick against Newcastle where I couldn’t train for seven to 10 days.

“I understand this, and now I'm in a situation where I need to fight for myself. As I said, I'm trying to do my best for myself, for my club and for the fans.”

After victory over south London rivals Millwall on Saturday, Palace are back in action at what is sure to be a febrile atmosphere in Brighton.

“In these kinds of games, there is always a bit of extra for us to do for our fans and our club,” Milivojevic says. “We are expecting it to be like every other game we played against them.

“It will not be an easy game: they are at home, they have a good manager and a good squad. We are trying to prepare in the best way.

“[The fans] were a massive difference when we played against them on a Monday night in our stadium. We totally deserved to win. The atmosphere in the game was amazing, especially when we scored before half-time.

“The atmosphere when we want back to the tunnel at half-time was amazing. The support they gave us, you realise how much it means to them. There is definitely a difference.” 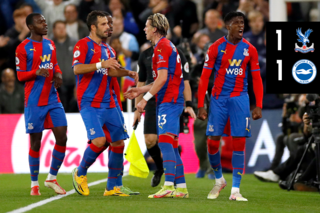 As a leader in the dressing room, Milivojevic ensures the squad understands the rivalry between the two clubs.

“I am captain, but most of us know very well how much it means for our fans, because we already have played against them,” he explains. “As well, there is the manager. His role is making everyone sure that the game ahead is one of the biggest for our club and our fans.

“We as players need to all understand to start properly, to be very focused like every other game. But this game has this bit of pressure which in the end means it doesn’t matter how good or well you play, it means bringing the points for the club and the fans.

“That’s the difference in those games.”

Without Wilfried Zaha, Cheikhou Kouyaté and Jordan Ayew, Milivojevic nonetheless hopes the Eagles can recreate recent past victories at the Amex.

“We miss him [Zaha], Jordan and Cheikhou,” he admitted. “But what can we do? They are playing at the Africa Cup of Nations so we wish them the very best there. I hope they are going to be next to the TV and giving us support.

“One [game at the Amex] we played with fans, and the other we played without fans. The mood is always good when you win, especially against Brighton away – the mood is on top.

“We really respect their squad and we know how difficult it will be for us, but we respect ourselves. We know how good we can be and how good we are, and we will do our best to win the game for the club and the fans.”