Vieira: Palace are 'different' since last game with Arsenal

Patrick Vieira says Crystal Palace are in a different place now to when they last played Arsenal at the Emirates stadium, but that his side still have to focus on areas of improvement ahead of the Gunners’ visit on Monday.

Palace almost took three points from north London in October 2021, however a dying-seconds Alexandre Lacazetta goal pushed them back to a draw.

Reflecting on that game before hosting Arsenal at Selhurst Park, Vieira said: “I think the game we played over there we played with personality and we tried to dictate the tempo of the game. Of course we knew it would be tough and difficult. But what we can take from that was those crucial moments we have to manage well. 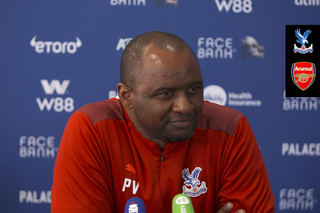 “The game is never finished until the referee’s whistle. It’s about the concentration we have to have, especially against those kind of teams. We know from when we start to today we’re in a different place but there are still some things we need to improve.”

Palace welcome an Arsenal side who have lost just one of their last eight league games and sit fourth in the table with a three-point cushion. Vieira said he isn’t surprised by their success this season, and commended manager Mikel Arteta’s work.

“I’m not surprised about the way they’re playing and progressing,” he said. “I believe they have a good squad and good manager. Now they have a really clear understanding about how they want to play, are playing better football and have confidence… it’s going to be challenging for us but we’re in a really good period as well.

“I think he [Arteta] went through a difficult period and manged to keep his calm and cool and managed to return [resolve] the situation. All credit to him and the work he’s been doing. The results he’s had lately have been really positive.”

Turning his attention back to Palace, the manager was able to look at a game that follows a 4-0 FA Cup win to reach the semi-final, and the return of several international players.

It will be their fifth home match from six as they look to build on a six-game unbeaten run.

“The staff, our responsibility is to keep challenging the players because we want more from them and they have the potential to do more. Having the positive result [v Everton] allowed us to have a happy camp and keep being demanding.

“Especially at home with the fans, the support we had at home has been fantastic and allowed us to perform at our level. We show a lot of character and spirit when we play those teams.”