Patrick Vieira says the quality of his squad means there are difficult decisions to be made when selecting his first XI, but that this will only increase the levels in the team.

“This is exactly what I want from the players,” he said in his pre-match press conference. “It is for them to compete for the position, and when they have that opportunity to play, to show how good they are for the good of the team.

“Michael [Olise] did really well for us, and he has to keep challenging for the starting XI. Same for Jack [Butland], he has to push Vince [Guaita] and I think that will be raising the demands and the quality of the team.” 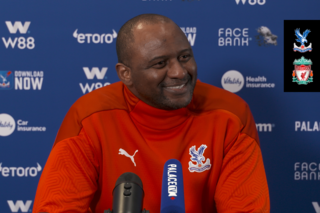 Jack Butland’s performance against Brighton & Hove Albion demonstrated his ability to push Vicente Guaita for a starting berth, something Vieira has welcomed.

“Against Millwall he had quite a solid game, but people focus on the mistake,” he explained. “Obviously when you are a goalkeeper and you make a mistake, you have more chance of scoring a goal. I was happy with the way he led the defence.

“I was really happy for him because Brighton he had a really good game. We took a point, and it’s because of the way he played. In the first-half he made some fantastic saves to keep us in the game.

“I’m really happy with the goalkeepers we have in this football club. It’s always been a competition. Vince never took his position for granted, he always works hard in training. There is competition in a lot of positions in the football club – this is what we want.

“Jack worked well and hard, and nobody in the team deserved that game in Brighton [more] because of his attitude everyday in training around the team.”