Patrick Vieira has explained that his players’ understanding of their individual roles is as important as their starting formation, as he prepares his side to take on a ‘confident’ Burnley at Selhurst Park this weekend.

Vieira switched to a two-man midfield for Chelsea’s visit last weekend before a return to the more familiar three-man unit against Watford.

“This is the system we use really often,” the manager said in his pre-match press conference. “I always like to talk about animation more than the system. 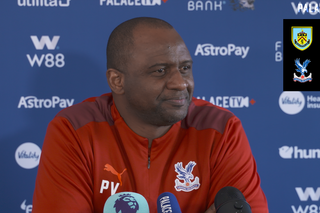 “I liked the way we played against Chelsea. People can call it a 4-2-3-1 or a 4-4-1-1, but what was really important was that these players understand their roles and responsibilities to have a really clear idea of how to play the game.”

Victory against Watford last time out was vindication for Vieira and his staff, after a series of positive performances went unrewarded by results.

“It is really important for the confidence,” he said. “We didn’t have any doubt about what we wanted to do, and how we want to do it. We were quite pleased with the performances we had lately, but we were missing something.

“What we were missing was winning games, and scoring those goals that allowed us to complete matches. Against Watford we had a more complete game in a lot of areas and that is good.

“That challenge is to keep that momentum. We know how hard it is in the Premier League to win back-to-back matches, and we have to do that.”

Palace’s next opponents arrive in fine form, having beaten Tottenham Hotspur and Brighton & Hove Albion in their last two games.

“[Burnley] are in a really good period,” Vieira said. “They won the last two games and didn’t concede a goal. They are a really strong team to play against, really organised and they don’t give you many chances.

Burnley’s form does not belie a side languishing in the relegation zone, a point Vieira emphasised when explaining how his staff prepare for such games.

“The table is what it is but we don’t want to have a game plan regarding a team’s position,” he explained. “We have a really clear idea of how we want to play the game.

“It’s about expressing ourselves on the day, creating chances and taking our chances. We have to improve game after game, and I think we are in a really good place.

“Now what I want from the players is to keep that momentum going, to be clinical and to keep winning football matches.”