Vieira: Eze is getting back to his best

Patrick Vieira says Eberechi Eze is benefitting from a full pre-season and can become a crucial part of his Crystal Palace side, as he prepares for a second campaign at the helm in south London.

"Ebs last year went through a really difficult period with injury,” the manager said at his pre-Arsenal press conference. “But he finished the season quite well because he was training every day and playing.

“In pre-season he has been training every day and playing a lot of games. I believe he is getting to his best. I believe Ebs will be an important player for us. 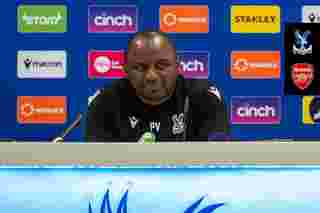 “We play in a different way, we have different strengths and it will be important for those players to play with their qualities. I believe we can be as good as we were last year.

“We will have to give him time to get to his best. We don’t have any doubt about how good he can be for us. He had a big injury.

“Of course, he’s in a really good place and when he has the ball at his feet he can create something or score goals. It’s not just about him, it’s about the other players around him – they can help him to be a better player.

“He will be really important and a really good player for us, because of the ability with the ball at his feet.”

There is added expectation not just for Eze but for the squad as a whole after a promising first season under Vieira, when they finished 12th and reached the FA Cup semi-finals at Wembley.

“It’s the expectation from the way we were performing last year,” Vieira said. “People will expect more from Palace, so this is something as a football club we have to manage.

“At the same time, we have to deal with this kind of expectations, the pressure on our shoulders.

“We had a good season last year, and it will be important for us to maintain those kinds of performances, the qualities that we showed but on a more consistent basis which will allow us to be more competitive.”

One player that Vieira hopes can improve the side is new signing Chris Richards, after the 22-year-old defender arrived from Bayern Munich in late July.

“He is a strong player, he is physical and he is really good on the one-on-ones,” the manager said. “His competitiveness is really high. He likes to compete [and] he loves to win drills.

“He is a proper defender and that will bring more competitiveness in the backline as well. He is a good player to have in the squad.

“He is a player who likes to compete. He is a winner, and he will bring more competitiveness.”