Patrick Vieira was full of praise for Palace players Cheikhou Kouyaté and Jean-Philippe Mateta after hugely successful weeks for the pair.

On Wednesday evening Kouyaté helped his country Senegal secure their place at the Africa Cup of Nations final, and is now preparing for the clash on Sunday. 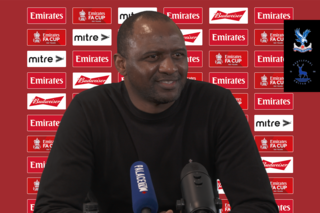 This is the third final the Lions of Teranga have reached, however they have never won the AFCON trophy, making their clash with Egypt a chance to create history.

Vieira, who was born in Senegal, expressed his pride with Kouyaté’s achievement: “I’m really proud and really happy for him. I knew how determined he was to win that competition and now they are in the final it’s the bigger one, the most important one [game] and hopefully they will win it and he will get back home with the trophy. We will be really happy and proud of him.”

Vieira then confirmed the Palace team will train on Sunday morning before going home, he expects, to watch their teammate compete.

Turning his attention to Mateta, who signed a four-and-a-half-year deal with the club on Monday’s transfer deadline day, he said: “I think JP showed his determination in the last couple of months. It’s been really challenging for him since he’s been at the club with injuries and a lack of opportunities.