Crystal Palace manager Patrick Vieira has had little time to turn his attention to the club’s upcoming league match with Newcastle United after the recent FA Cup final.

Just two days after the Wembley trip Vieira was back speaking with the media, looking ahead to his opposition on Wednesday night.

He highlighted their strengths, saying: “We know how strong they are at home. They play with a lot of energy. They have quality of players who can run with the ball, score and create chances. 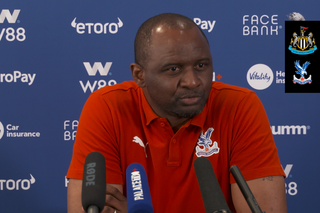 “They’re having a good run. A new manager has come with ideas about how he wants to play the game and with the players they bring, everything has gelled. They’ve had positive results and a good run. We’re looking forward to the game. We want to do well and want to perform.”

Eddie Howe took over at St James’ Park in November last year, and has guided the Magpies to relative safety – sitting 12 points clear of relegation.

Vieira was willing to praise his opposite number, saying: “I’m not surprised because you just have to look at how well he was doing at Bournemouth. He is an experienced manager, and has a really clear idea about what he wants from the players.

“He brought the players that play the way he wants to play. For some clubs you can’t make mistakes when choosing players and the ones you bring really help you to perform. All credit to him.”

Finally, the manager will pick his team with a short period of rest after Wembley. He was without Conor Gallagher under the arch due to the midfielder’s inability to face his parent club.

Now, Vieira says, he has a choice to make in midfield. He updated on fitness in that area and the decision facing him now:

“That will give us different options. I was really pleased to see how Cheikhou [Kouyaté] did in that position [v Chelsea]. This is something I had at the back of my mind. We have to use the system based on the quality Chelsea have and I was pleased with how we responded.”