Patrick Vieira has said his Crystal Palace side are understanding what he wants from them better, and improving defensively following a fourth consecutive home league clean sheet.

That is a Premier League record for Palace, earned by beating Watford 1-0 at Selhurst Park on Saturday afternoon.

Vieira said in his post-match press conference that his side have consciously worked across the team to finetune their defending, saying: “I think from the start of the season we knew we needed to improve our defensive game and we’ve been working on that. The players have been working well, working hard and that allowed us to be more solid. 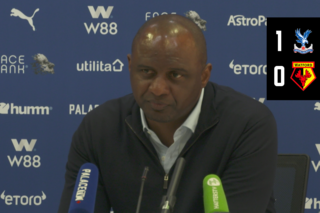 “Our front players are working harder out of possession and that gives us more solidity. What’s important for us is to keep being demanding… this is something we improved and still want to improve because there are some details we can do better.

“[The way to improve] is to keep practising in training and trying to put the best team and players out to create those chances. Today as well we didn’t play especially well in the last third and of course we have to and need to improve because when we have possession we need to be more dangerous and create more chances.

“It’s about having the right balance and trying to win football matches. We should score goals and on the other side when suffering we need to be more solid. We have a better understanding about what we want to do. We have to be more clinical or accept the dominance of the opposition and defend. We’ve accepted that better.”

On the other hand Vieira critiqued his side for not winning more comfortably against the Hornets, saying they should have made more of the openings they created.

“It was a difficult game because we didn’t move the ball quick enough to find those players between the lines and create chances. We made it really difficult for ourselves but in the end managed to win the game. It wasn’t our best performance but we showed a lot of maturity in the way we managed the game.”

Finally, Vieira was asked about former Palace manager Roy Hodgson, who was in charge of a relegated team for the first time in his five-decade career.

“It’s always difficult for the manager to get relegated,” the Frenchman said, “but it was a really difficult task to arrive in the middle of the season. When looking at the career he has had as a manager, he’s an example for other coaches.”