Vieira: I loved every part of the Wolves game

Patrick Vieira said he “loved every part” of Crystal Palace’s performance against Wolverhampton Wanderers, praising the team for “the perfect game in possession.”

Vieira expressed his satisfaction with the 2-0 win, but in characteristic style also added "everything is not perfect."

He said: “It was a really good performance. I loved every single part of the game. I think we played really well, especially in the first-half. And in the second-half when we were a little bit tired we showed difference in the game – we defended well when we needed to. Overall it was a really good team performance. 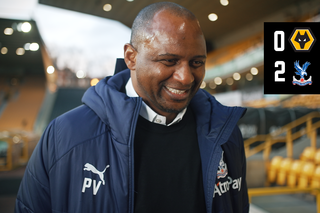 “I think the first-half was one of the best [of the season]. But everything is not perfect because when you create so many chances you want to take them and we didn’t. So this is something we have to keep in our minds.

“When we were in a good period we managed to score the goals and this is positive, but there was a space there and we created enough chances to score more.”

Sticking with the positives, Vieira focused on Palace’s ability to dominate a difficult, well organised opposition. He praised their strength in defending the lead and breaking down a resilient host.

“This [protecting the lead] is the side of the game we need to show more often,” he said. “Because it’s really difficult to maintain the quality we showed in the first-half, especially after the FA Cup game [v Stoke City]. We showed character, we showed togetherness, we showed organisation and we had so many blocks. That was important for us.

“This is why this performance made me really pleased, because we knew how difficult it would be to make chances. Today we had the perfect game in possession because we created a lot of chances, managed to score two goals, especially against a team who don’t give a lot away.”