Vieira on award nominations, Zaha and Gerrard impact at Villa

Patrick Vieira says that Wilfried Zaha can take himself to ‘a different level’ at Crystal Palace next season, as he looked ahead to facing Steven Gerrard’s Aston Villa on Sunday.

“When you talk about Crystal Palace, you talk about Wilfried Zaha,” Vieira said in his pre-match press conference. “He’s done fantastically well. As a manager I would love to keep him, and he as well needs to want to be here.

“This season, I think he’s shown to everyone what this football club means to him, because he’s been performing well and he’s been scoring goals. 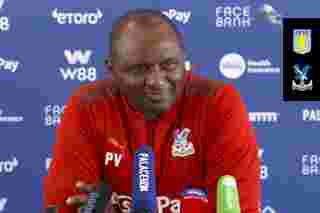 “I believe he can still take himself to a different level and help the team to grow.”

Zaha and co. will travel to Villa Park this weekend, to take on an Aston Villa side that came close to upsetting Liverpool during the midweek.

“I’m not surprised, because when you look at the talent that they have obviously they are not in the position they should be,” Vieira said. “There is some real talent in the team and we’re expecting a challenging game.

“[Aston Villa] was one of our tough games at home. They started the game well, and in the first-half it was really difficult to play. They defended well as a team and we couldn’t pass the ball around, we couldn’t create chances.

“It became really frustrating for us. We know what to expect and how good they can be. We want to play well and do our best.

“Straight away I think [Gerrard] had an impact on how to organise the team, and he had some really good results. But Villa is part of those big clubs in this country.

“It will be challenging, and I hope he will be successful because when you look at players we used to play against and who decide to go into management, you wish them all the best and hope they can be successful.”

“It’s good – it’s always good to be nominated in this kind of award,” he said. “To be nominated, everything has to go well. The club has to perform, the players have to perform, and it’s good for showing what you have achieved in the season.

“[Conor and Tyrick] have been really good this season. They have been playing week-in, week-out, performing really well. Both of them have been called up to England so that is a massive step forward.

However, Vieira’s focus has now turned squarely to the remaining games this season.

“It’s for us to finish the season well and to look at ourselves and say we maximised the potential of the team and we are where we want to be,” he said. “It would be a really good achievement for the football club to finish in the top 10 with the summer we went through.

“After that, it’s about how we can improve ourselves and which couple of players we can bring in to improve the club.

“It’s just finishing these three games as best as we can, and then after we have to analyse the parts of the game we have to improve. At the minute is not the right time to talk about [the season as a whole].

“What we want to do as a football club is challenge ourselves to improve, the players want to challenge themselves to improve. We have to work well, be ambitious but we will summarise the season at the right time.”