Patrick Vieira says he is still challenging Wilfried Zaha to give more to the squad despite the winger’s blistering form this season.

Zaha has already scored a record-equalling 11 goals this season, hitting the landmark with three fewer appearances than his last highest-scoring season, 2020/21.

Vieira said he’s pleased with the No.11’s performances and highlighted his value to the team, but stressed that he is still demanding more.

“This is the strength of the squad,” he said in his pre-Leicester City press conference, “to count on the ability of the squad to get results. Wilfried is a massively important player for us and we are strong with Wilfried on the team.

“In every team in the league you have a player who can make a difference and Wilfried is one of those. I’m glad he’s playing well, creating chances and scoring goals and in a really good period at the moment.

“[The way to motivate him] is to challenge him. There is a lot more he can do for the team. He’s working hard, creating chances, scoring goals, and I’m really happy with his performances at the moment. The challenge is the same for him as the rest of the players: to maintain those performances.” 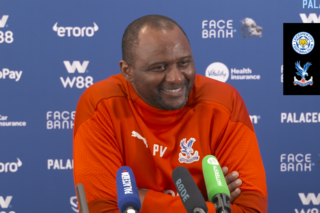 Turning his attention to the rest of the team, Vieira said “everybody is feeling good” when asked for an update on availability. He confirmed that every player should be in training on Saturday pre-Leicester bar Nathan Ferguson, who he said will “hopefully come back really soon” as he continues his rehabilitation.

Finally, the manager was asked if he’ll be influenced by the upcoming FA Cup semi-final when deciding his team to face the Foxes.

“No,” he confirmed, “it’s not in my thinking and it’s not in the players’ thinking. It will not have an impact on the starting XI I’m going to choose. We have time to think about the FA Cup, but the main focus is about Leicester and putting in the best squad to win that game.”