In literature, the ‘hero’s journey’ is a template for stories that involves a hero at their core. Abridging, it outlines that the hero must begin an adventure, triumph over adversity and, crucially, return home a changed character.

It’s the image of the daring child, packing their bag, traipsing over mountain tops to confront an insurmountable challenge and return as an adult.

In football, it’s the teenage prodigy, lacing their boots, bursting onto the national scene to earn a career-defining move and return ready to become an icon.

READ: Portrait of an Icon: The making of Wilfried Zaha

Wilfried Zaha had graduated from Crystal Palace’s Academy after almost a decade. He’d earned his debut, secured his berth in the first-team and gone on to lift his local club into the top flight of English football.

His story was developing as if he’d written it, and, with each turn of the page, Zaha stepped closer to fulfilling the perfect footballing fairy tale.

When the country’s most successful club came calling less than three years after the wiry teenager received his professional break, it seemed Zaha’s story was approaching an early high. But things didn’t quite go to plan, and the youngster met head-first with adversity.

“I was a shell of Wilfried Zaha,” explains Crystal Palace’s talismanic winger, recalling his time with Manchester United and, later, Cardiff City on loan. “It wasn’t me at all. People never got the real me when I was there. I was a ghost of myself at the club, I didn’t used to speak to anyone, I used to just go there and do what I had to do and then go back home. I just wasn’t myself.”

For friend and former teammate, Yannick Bolasie, Zaha’s United transfer still carries a twang of misfortune. As flamboyant in his assessment as he was on the pitch, the former Eagle says: “I still feel today he was unlucky because Sir Alex Ferguson left.

“At that time, my perception was, with his ability and what I’d seen him do live, he was going there to be the next Cristiano Ronaldo. That’s my perception. I don’t really like putting players on that kind of pedestal, but that’s what I could see: Sir Alex Ferguson transforming him.” 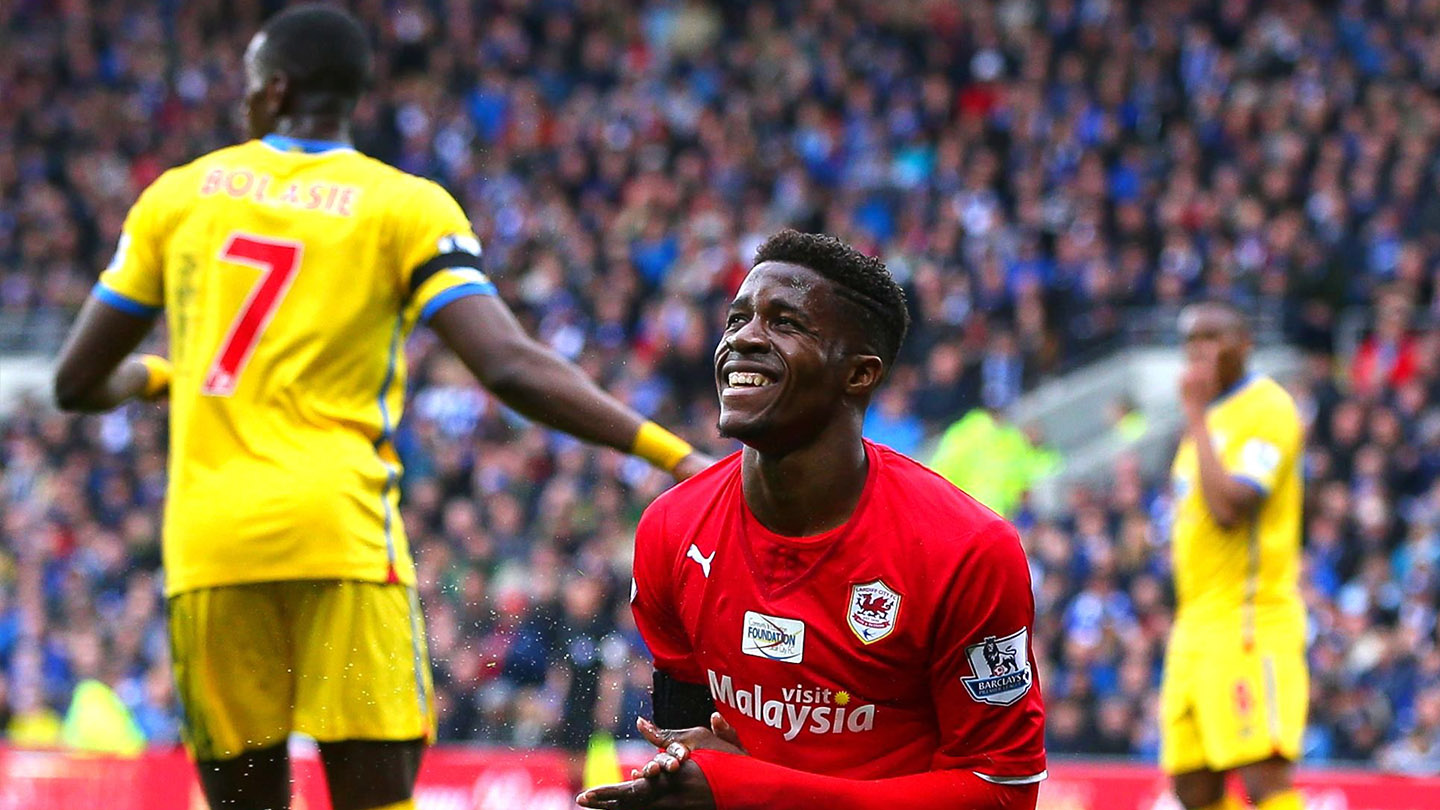 Ultimately, Zaha’s 2013 move saw him play just four professional games for the Red Devils. It was supposed to be the realisation of a boyhood dream, the grandest feather in an already brimming hat, but instead it left the 20-year-old “going through a bad spell.”

In characteristic fashion, Zaha looks back at the time as “100% a learning curve,” explaining that “mentally, it helped [him] be stronger” seven years later.

The hero’s return beckoned, and Zaha was loaned back to Palace for the 14/15 season: back to the teammates he had secured promotion with and back to the fanbase which exalted him as a local icon.

“I was talking to him off the pitch and asking ‘how’s United?’ and all of that kind of stuff,” recalls Bolasie. “I knew what he was going through at that time. When he came back, he was ready to come back.

“It was about: ‘Hey, come on, whatever’s done now - it’s nothing. We’re here now, let’s go again. Let’s do it again.’” Bolasie recounts his encouragement with the same vivacity he no doubt used six years ago: “‘Yeah, let’s go again, bro. Boom! Let’s do it.’

“He settled in well: Newcastle, bang, goal. That would have helped everything. You could see in the celebration when he scored what it meant.”

Zaha marked his heroic return in the fashion of a future three-time Player of the Year: rifling home a 95th-minute equaliser against Newcastle United two days after coming “back home.”

“Of all the teams to go back to, it was nice to know Palace were keen to have me,” Zaha says. “I was just happy to be back home, to be back at a team I knew well and with people I knew well.

“I’m passionate, as everyone can see when I score a goal; I can’t help my emotions. [Celebrating v Newcastle] was a mixture of all the stuff I went through and being back on the pitch, back doing what I love and nothing to hold me back.”

Strengthened by his experience in Manchester and electric start to life back in south London, Zaha began the campaign to cement his status as a club icon.

One of the key relationships driving him on in his first two seasons was, of course, with Bolasie, and the pair reignited their eye-catching connection that terrorised both flanks when they first met in the Championship.

Between them, they would inject colour and flare into Palace’s wings, dazzling supporters and opponents with flashing tricks and capturing link-ups.

Bolasie, who says he joined Palace in 2012 under Dougie Freedman’s instruction to “form a partnership” with Zaha, explains the pair’s connection.

“He was about four years younger than me,” he says, “but just joking around and stuff, we naturally clicked and from then on I’ve been very, very, very good friends with him. He’s probably one of my best friends in football. 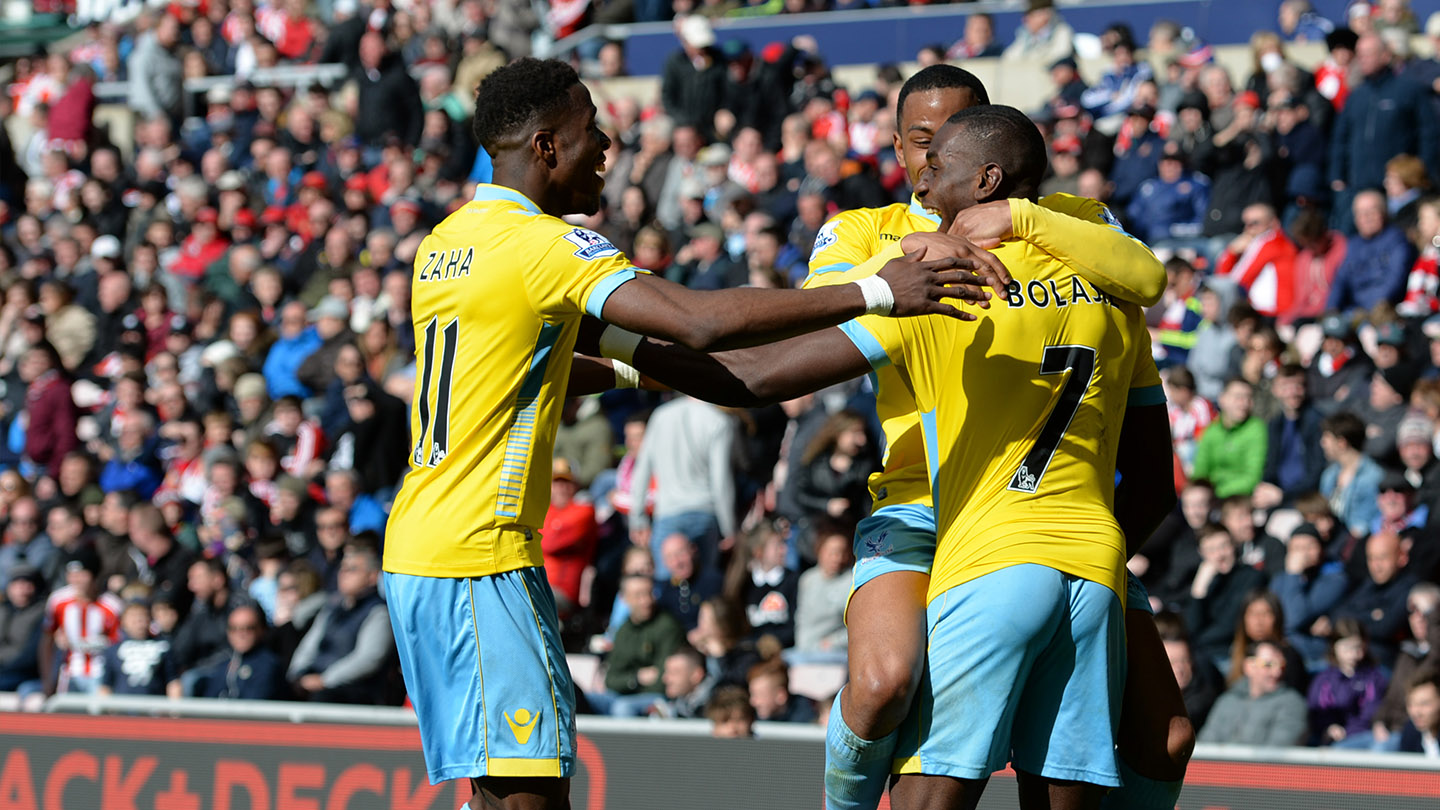 “Everyone knew he had the ability and for me, seeing it first hand was like a little kick up the backside, to say: ‘Hey, listen, Wilf is doing his thing. You’ve got to step up as well.’

“It was a great honour to play with him… It was great playing with Wilf and also credit to Palace for bringing him through and having the confidence in him after that move to bring him back home. And you can see what he’s doing now - it’s unbelievable stuff.”

When Bolasie first met Zaha, the Ivorian’s professional experience at Palace was relatively short. But it was spent surrounded by senior teammates and tough-minded professionals.

Bolasie recalls how the squad uniquely prepared him for the future they could see approaching.

“Damo [Damien Delaney] and different senior players used to go around kicking him in training, on purpose, just because we knew on a matchday, that’s what people would do. He used to react a lot in training but then you could see him growing, getting kicked and getting back up.”

Those early years forged the man today, and current manager Roy Hodgson draws a parallel with the ‘growing’ Zaha of Bolasie’s day: “He’s got a very highly developed sense of justice and injustice,” Hodgson says, “and that doesn’t change in training sessions. 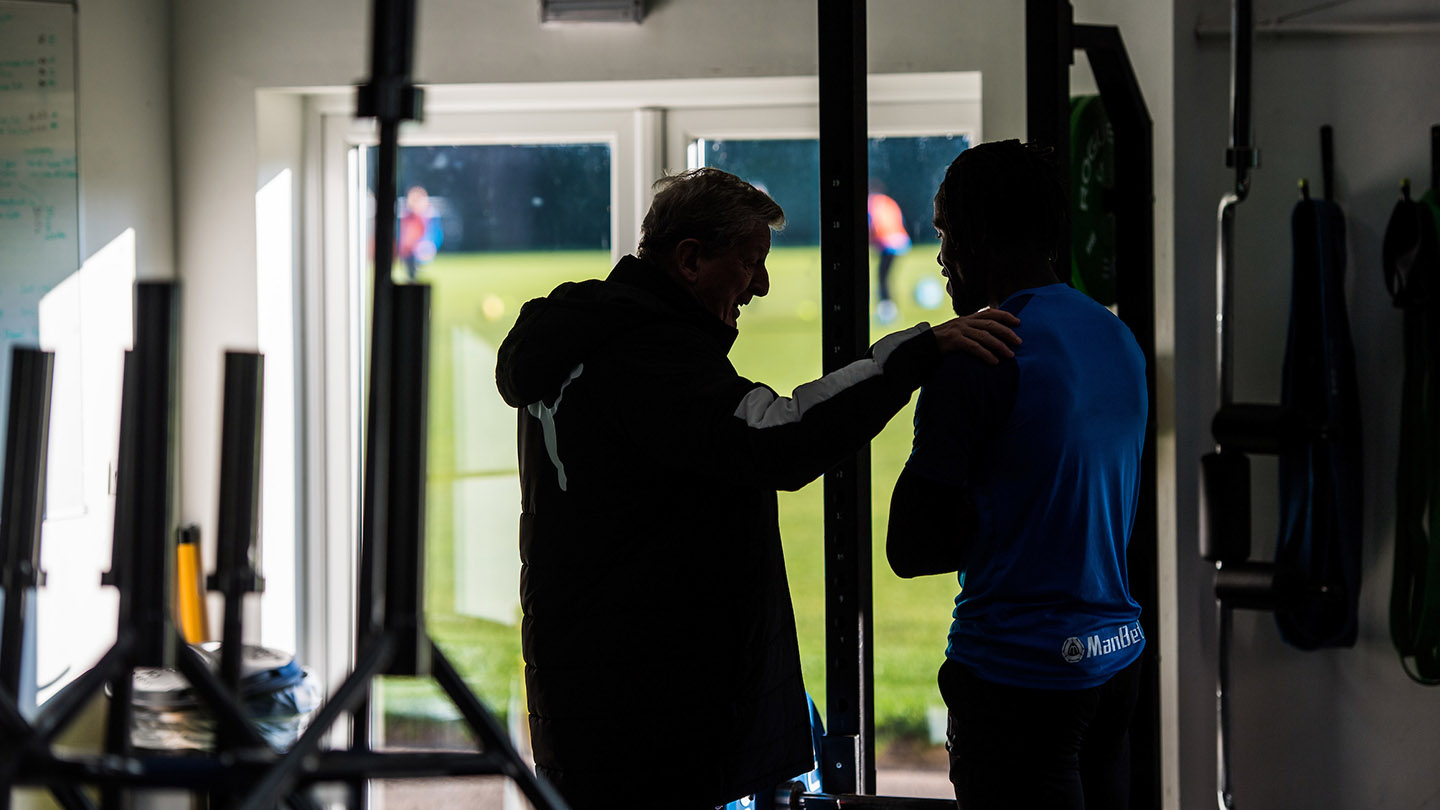 “It can be quite tough for [assistant manager] Ray Lewington and [first-team coach] Dave Reddington if they’re refereeing five-a-side games and he’s not getting the free-kicks he thinks he deserves, but it’s all done in good spirit. In actual fact, he’s an easy person to work with because he loves playing football and he loves doing what he can do and what he does well. Of course, that’s something we all appreciate.

“I haven’t worked with that many players who I could say are more talented than Wilf Zaha. He’s got an enormous natural ability, an enormous skill level and I’ve worked with lots of good players in my time, so if you’re talking about his level of skill, his keenness to play football, he’s right up there with the very best.”

But, for Hodgson, Zaha’s on-pitch instincts are just part of the character that makes the man. He elaborates: “He is a generous boy, Wilf.

“Wilf keeps it quiet, but I often hear from [Player Liaison Officer] Danny Young, little things he’s done with regards to people around the club - helping them out in various ways financially… He does it for the right reasons, because basically he’s a generous and kind-hearted person.

“We’re very proud of Wilf, of what he’s achieved through the years and I’m sure he’s proud, too. It’s nice to see someone who has given so much of his football talent to Crystal Palace Football Club and I think he should be honoured.” 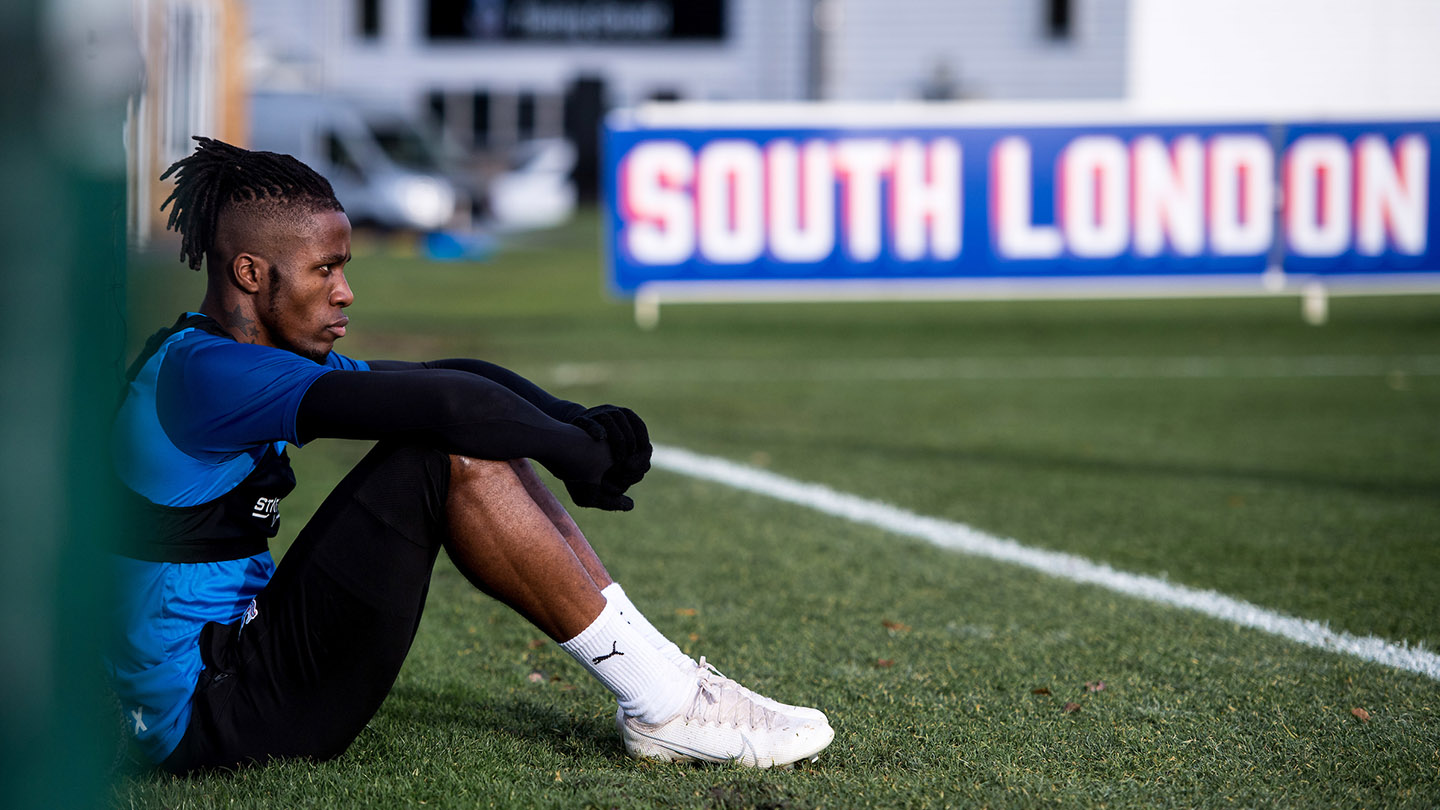 Bringing a near 20-year story to a close - from Zaha’s arrival at Crystal Palace as a reserved, almost shy eight-year-old boy to today, aged 27 and with a firm, undeniable place in the football club’s history - Bolasie reflects on his friend and colleague’s transformation.

“When I watch Palace and see him play and I feel: ‘Hmm, you could have done this there,’ I do tell him. Because I feel like I’ve got that relationship with him. Not to try and coach him but to tell him: ‘Maybe you could have let that shot go a little bit earlier, you didn’t need to do that.’

“Every season for me, he’s come out and proved he’s got better. He’s setting up teammates, he’s releasing passes quicker than I’ve seen him release passes before. I’m seeing an improvement in his whole game, he’s not just this dribbler that everyone thinks he is, he can see a pass and a through-ball. 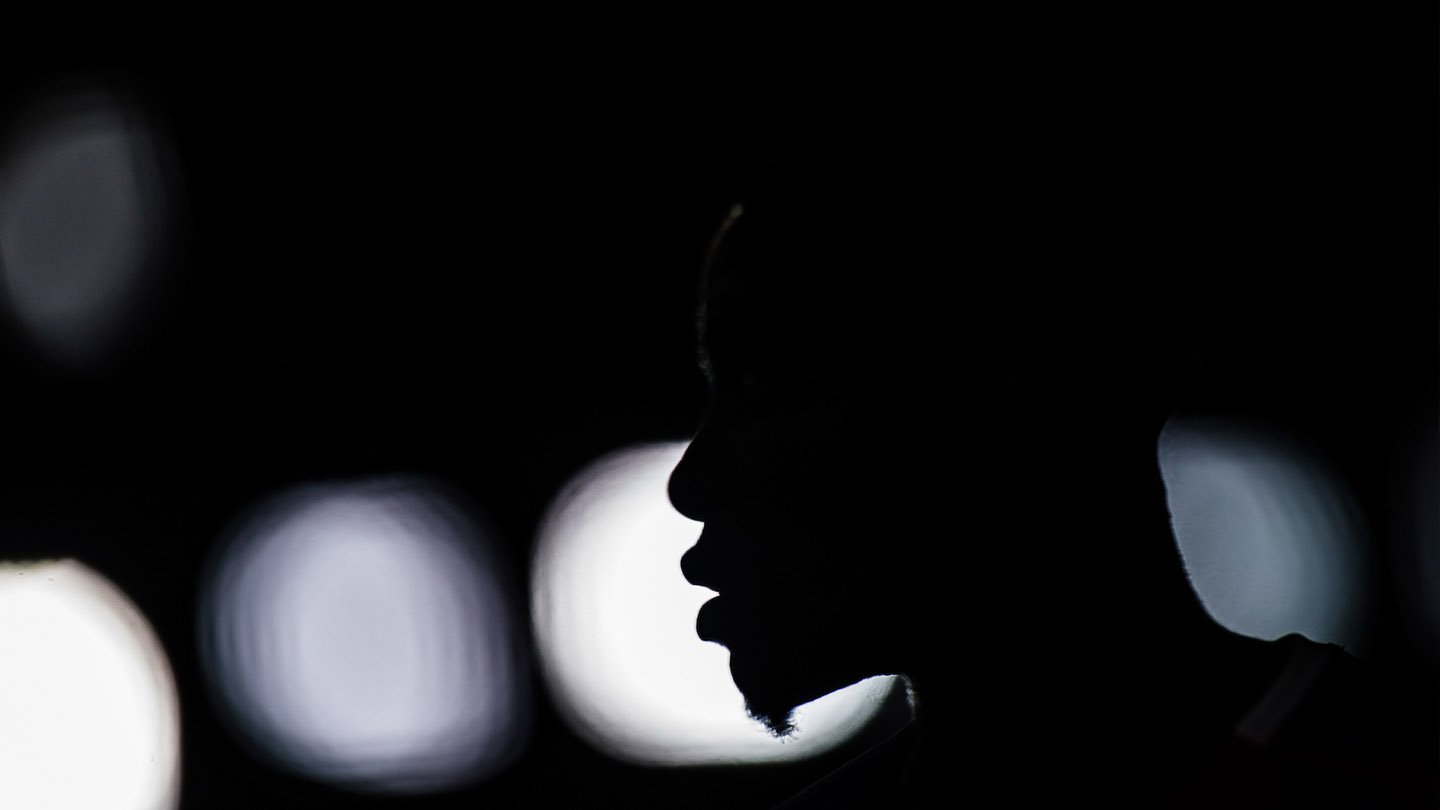 Though while those around him pick apart and memorialise the Wilfried Zaha story, for the man himself, not much has changed.

“I just wanted to play football, man. To be able to do that for one club, I find that amazing. And to be held in that regard – one of the best ever – I find it crazy.

“Crystal Palace gave me a chance from the age of young and me going through a rough patch at United, Palace took me back. All I could do is give my best and to hear people talking about me in that way, all I can say is thank you.”

Ten years after making his professional debut, Wilfried Zaha continues to open chapters in his hero’s journey. And with each turn of the page, he becomes still more of a Crystal Palace icon.

Portrait of an Icon is a three-part series covering Wilfried Zaha's Crystal Palace story to mark the 10-year anniversary of the winger's first-team debut. To read part one about his life in the Academy and professional beginnings, click here now. For part two about Zaha's burst onto the nationwide scene and role in promoting Palace, click here instead.