Zaha: My focus is on scoring goals

Wilfried Zaha explained that scoring goals is now his primary ambition on the pitch having developed his game, as he praised Crystal Palace’s development under Patrick Vieira.

“Me personally, I don’t do as man skills and all that stuff anymore,” he said before the Eagles’ trip to Molineux to face Wolves this afternoon. “I’m just trying to score goals. That’s the main thing.

“Every game my mindset it that I need to try and score, assist or do something so that’s what I'm working on instead of just dribbling.

“I just thought to myself: I’d much rather cut out the stepovers – if I can get a shot off I’ll do that.” 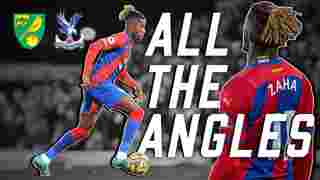 Zaha scored two wonderful goals in February, remarkably similar strikes against Watford and Norwich City. He broke down the thought process behind the finishes.

“As soon as I hit the ball, I felt that I had got it clean. Sometimes as soon as you hit the ball you know. It’s the same with the Watford goal. I’ve given myself half a yard and hit it clean.

“As soon as I hit both of those shots, I knew. As soon as I hit it, it was a quick glance and then run off! I just knew. I hit it so well that when I lifted my head I saw it hitting the back of the net – job done.

“I’m happy that what I'm doing out there [in training] is paying off on the pitch.”

After a transitional summer which saw a great deal of change among both the playing and management staff at the club, Zaha says the Patrick Vieira era has got off to a good start.

“This is the first year we’ve played the way we are playing,” he said. “I feel like there’s a lot of criticism about some of the games we should have won, but with the way we’re playing and the players we’ve brought in I feel like we’re having an amazing season, because there’s so much more to come.

“I’m not worried personally about things right now, because I think 11th is very good considering it’s a new playing style – the players are only playing together this season so I think we’re doing alright.

“I knew it wasn’t going to be perfect straight away, but I feel like the team is going in the right direction. We trust him [Vieira] and it’s going well because we’re 11th – we could have been 19th or 20th.

“We’re heading in the right direction. Everything is not going to work straight away, but the way we’re trying to play is very good.”

Zaha says the strength in depth across all positions in the squad is improving performances on matchday – as are the demands of the manager on himself personally.

“When there’s healthy competition in the team, it tells you that you have to be eight out of 10 every week, or someone is going to take your position. Having players who are ready every game, if you’re not having the best game, is what is needed and that’s helped the team massively.

“The gaffer has screamed at me numerous times in training, but him screaming at me shows that he expects the highest level from me. Him as a player, he was unbelievable, so it’s a compliment seeing him have so much trust in me.

“I just try to give back that trust.”