Wilfried Zaha said there’s “a lot more to come” from Crystal Palace after their 1-0 victory over Watford put them ninth in the Premier League table.

Zaha added to his already record-breaking personal tally (now 14) of goals scored in a single season by scoring from the spot against the Hornets, and in doing so helped Palace keep a fourth consecutive Premier League clean sheet at home for the first time, and move up into the top half of the table.

He said achievements like this can encourage the squad that they’re on the right path, but that the future can look brighter still.

“It was massive because obviously for the players that have just joined the team it gives them confidence. It gives everyone confidence to understand that the team we’re trying to build is a very good team and that in the first season this is what we can do. So it shows there’s a lot to come in the future. 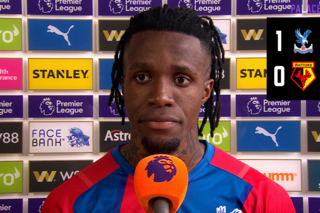 “We’re taking every game as it comes and just glad to get the points on the board. Let’s see how high we can get up the table.”

Zaha said the clean sheet highlights Palace’s collective success this season, with another home shut-out earned by all 11 players.

“It’s showing that everyone understands their job and is working together,” he said. “It’s not even a thing where it’s just the defence. It’s the whole team. It starts up-front with the way we defend and it’s a credit to everyone.”

Finally, asked about his spot-kick, Zaha said he’s happy to be scoring if it helps the team, but that he hopes Palace can up their goals tally going forward:

“As long as I’m scoring the penalties I can’t complain, really. The main thing is we managed to get the three points today so I’m happy.

“One thing we definitely need to work on is punishing teams. Today we had a lot of possession but didn’t make the most of it, so I think going forward that’s something we need to work on.”