The walkers completed the Palace for Life Marathon March, powered by Utilita, in socially distanced groups of six, setting off from Selhurst Park bright and early on Saturday 10th October to walk 26.2 miles through the streets, parks and woodland of south London.

Stand-up comedian, actor and lifelong Crystal Palace fan Izzard said: “This is my first full Marathon March so I’m loving it, normally I’m running marathons, but this was actually very hard work. Mark and Shaun set a quick pace, they’ve got longer legs than me! I want to try and do this for as many years as I can.

“It’s been great going all around the area and knowing that we’re helping kids, we passed the [CPFC] Academy and to see the kids out playing there was wonderful. I really believe in the ambition of this club, for the kids and for the future, it’s onwards and upwards.” 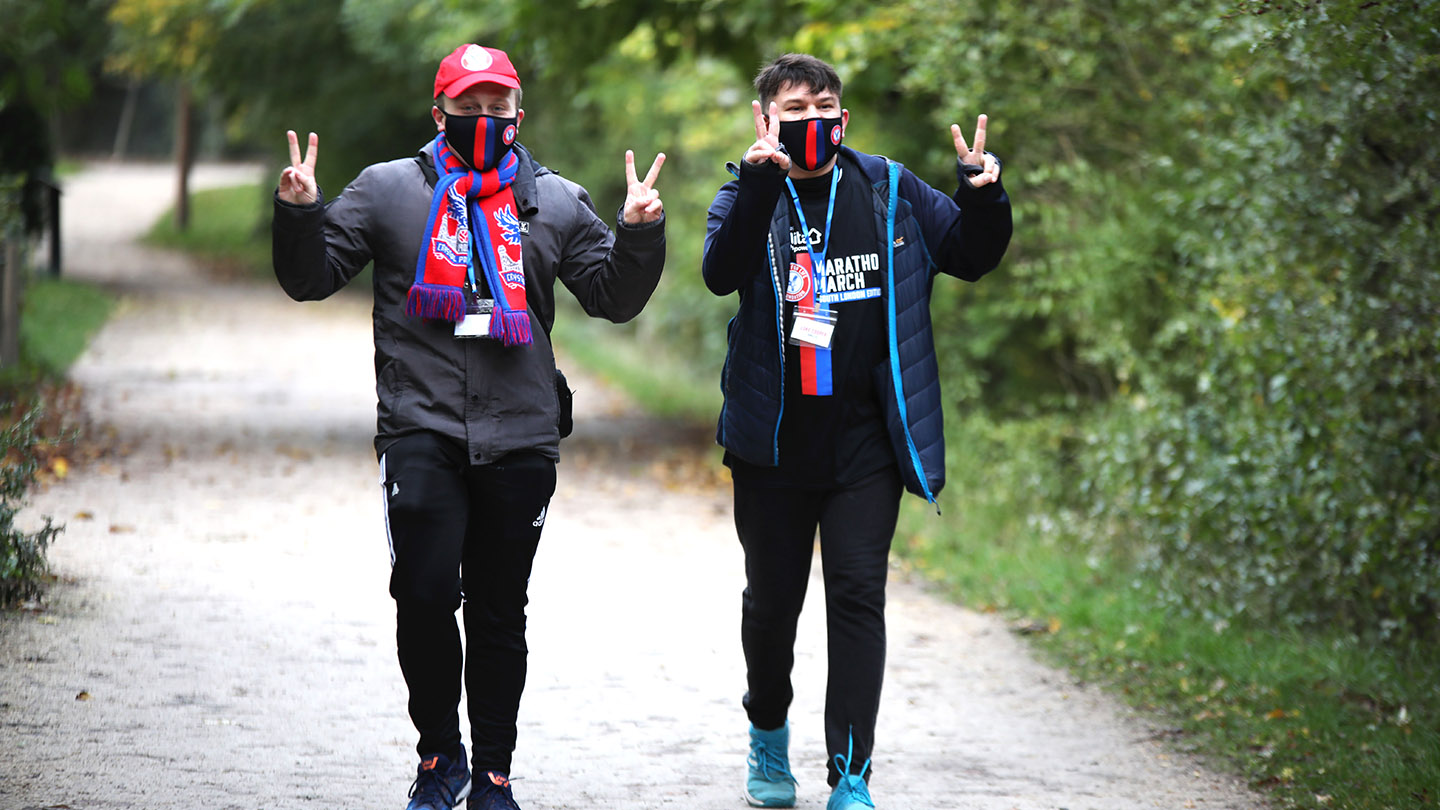 The Marathon March, powered by Utilita, was raising money to support vulnerable young south Londoners, in particular those who have been affected by the pandemic. One of the projects that will be funded is the Autumn Extravaganza, a holiday camp to offer young people a safe place to enjoy sport and other activities during October half-term. Children will be provided with a healthy lunch each day and take part in workshops about positive mental health and nutrition.

Palace for Life Foundation Chair Ed Warner decided to run the 26.2 miles so he could pass as many of the groups as possible along the route: “The turnout has been unbelievable," he said. "We really didn’t know if people would want to take part this year but what we’ve seen is a fantastic commitment to the Palace for Life cause. People want to do something positive this year, for themselves and for society.”

After leaving Selhurst Park, walkers passed through Crystal Palace Park and Bromley, stopping at Kent County Cricket Ground for lunch, before dipping into parts of the Greenwich Meridian Trail and the Vanguard Way Trail. The final few miles passed through Croydon and Selhurst, before finishing with a lap of the pitch at Selhurst Park. 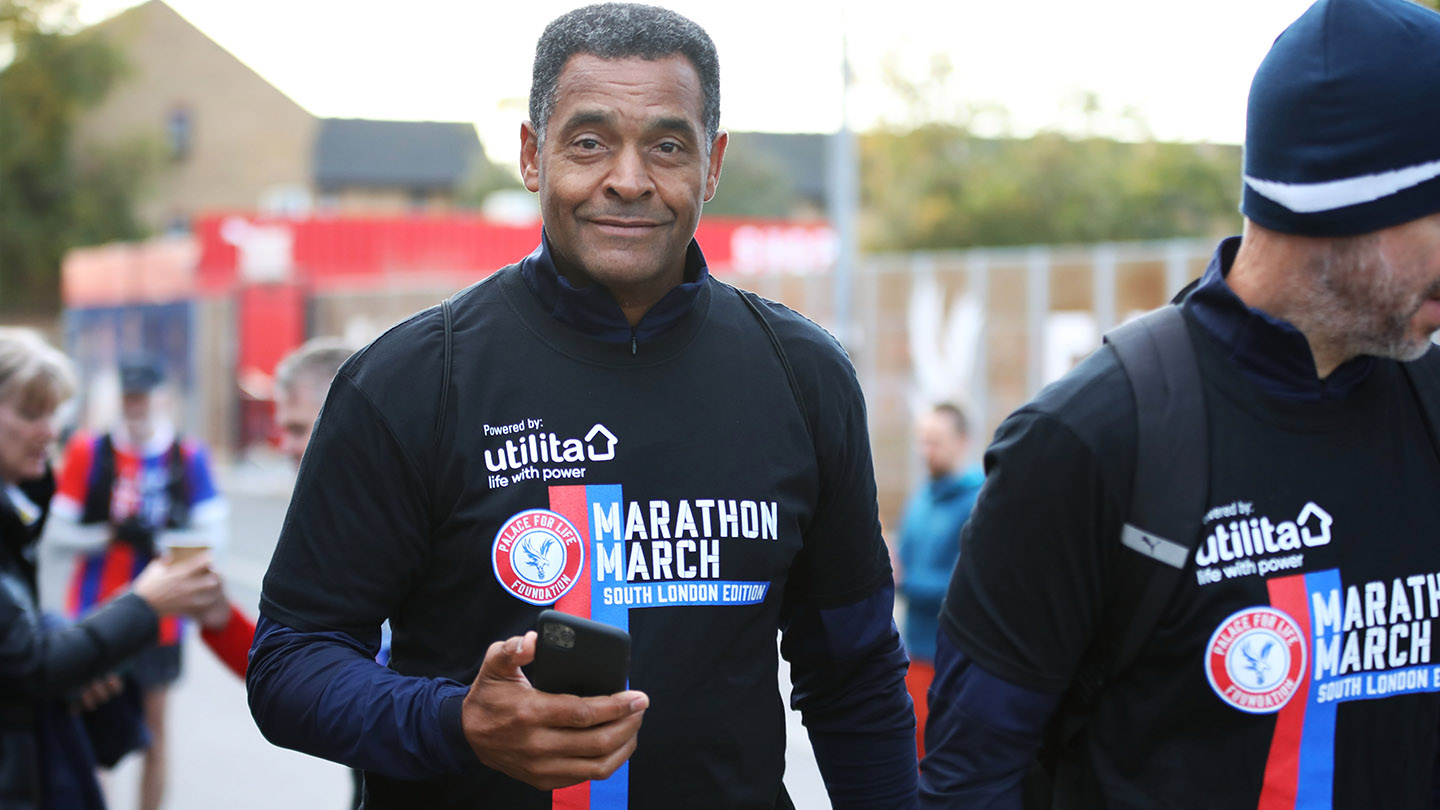 Palace legend and Head of Under-23 Development at the club, Mark Bright, took part for the third year running: “It’s been a really good day. I want to thank the people who’ve sponsored us, we had lots of people cheering for us along the way as well. We do some great work in the community and this is all to support the kids," he said.

“Palace for Life Foundation go out and help young people to overcome obstacles in their lives and to overcome insecurities, they help them get jobs or into education, they just help in any way they can, so we support them and they support the community.”

Head Coach of the Under-23s Shaun Derry added: “I’ve been meaning to take part for the past few years so I’m glad it coincided with a free weekend for the team. It’s been a great day. This is what Crystal Palace is all about, community and working together as one club.” 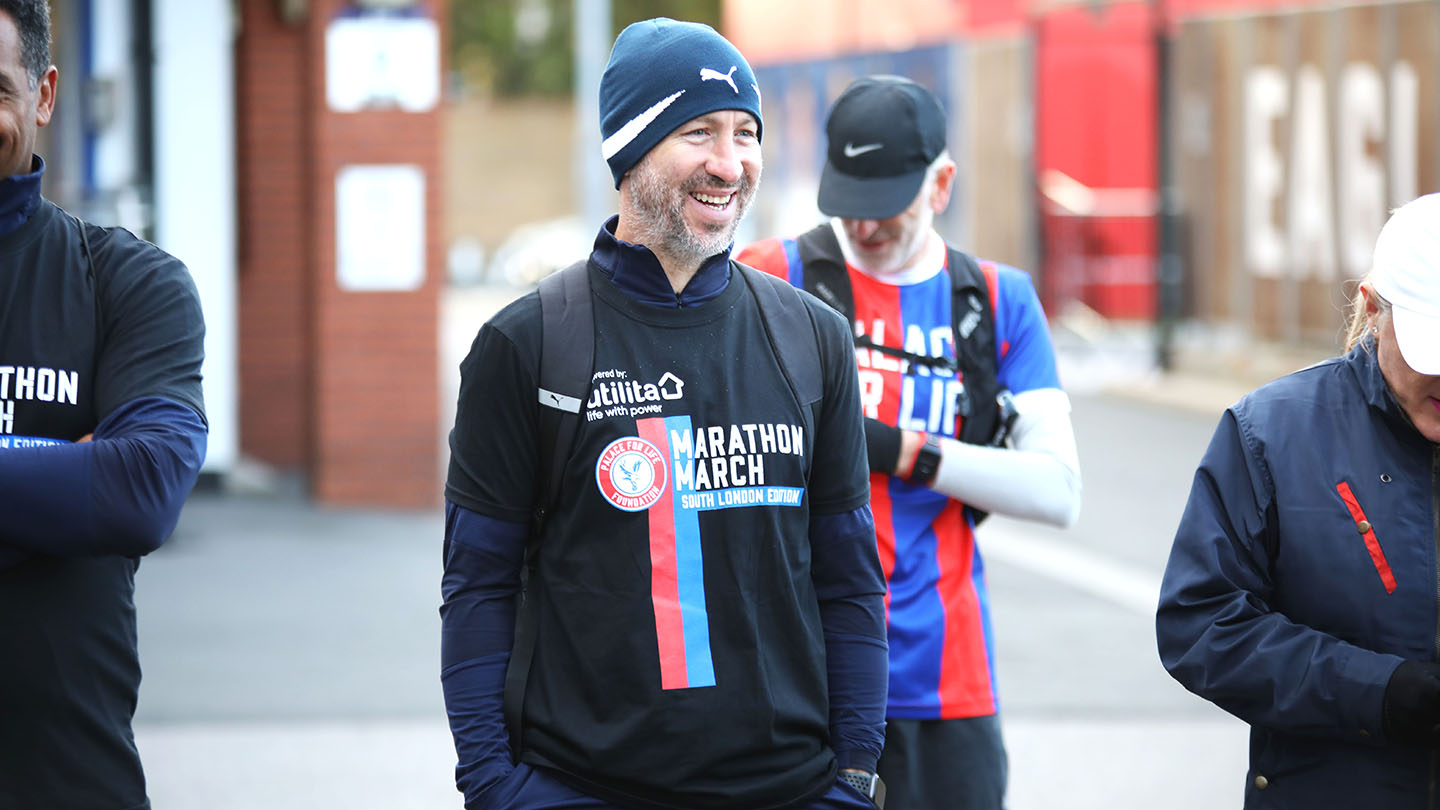 A number of different groups took part in the event including the Five Year Plan fanzine, Proud and Palace, The Eagles Beak and a group of young men from Waddon Youth Club.

Taking part for the first time were the Palace for Life women’s walking football team, who raised over £3,000. Their captain Catherine D’Rozario said: “It’s been brilliant, we’ve had such a great time. We trained really hard for this. We wanted to help the local community, Palace for Life do such great work helping the young (and not so young!) members of our community and we wanted to give something back.”

For the second year running, 14-year-old Stefan crossed the finish line first, he said: “I’m really tired! I’ve been training with my uncle and he got an injury so he couldn’t make it, but I hope I’ve done him proud. I liked that it was a whole loop around this year, it was hilly, but I pushed through it! I was crying on the way up to Selhurst Park, I’ve been looking forward to this for months.”

Fundraising Officer at Palace for Life Foundation Tash Stephens, who led the organisation of the event, added: “It’s been brilliant to bring Palace fans back here to Selhurst Park for the first time in months, we’re just so happy to have got our fourth Marathon March done, especially in these circumstances.

“We were targeting £45,000 and we found out at lunchtime that we’d smashed that so we’re extremely grateful to everyone who has fundraised and donated, as well as our sponsors, Utilita. The money will go towards helping young south Londoners recover from the pandemic, so activity sessions, education sessions and just helping them to feel some sense of normality in their lives again.”

You can still donate here.