After stretching their unbeaten run to five games on Monday night against Manchester City, Crystal Palace will look to book a spot in the FA Cup semi-finals at Wembley with victory over Everton at Selhurst Park on Sunday, 20th March (12:30 GMT).

Palace will hope for a repeat of the last time these two sides met on a chilly winter day in December, as a Conor Gallagher brace saw the Eagles claim all three points.

After Salomon Rondon’s goal brought Everton back into the clash, Gallagher picked up the ball on the edge of the area and fired into the top corner to secure an important victory – and score one of the goals of the season in the process. 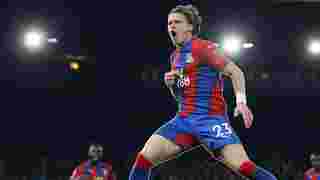 Palace could do even better by emulating the FA Cup tie of 100 years ago, when they travelled to Goodison Park in January, 1922 – and scored six times to demolish the Toffees 6-0.

Now unbeaten in five games in all competitions, Palace could hardly be in better form coming into the quarter-final tie. A hard-fought draw at Selhurst Park on Monday night kept Palace in 11th place in the league table – and against champions Manchester City no less.

The draw meant Palace became only the second side in the Pep Guardiola era to prevent City from scoring against them across a league season, keeping another clean sheet after a stunning victory at the Etihad in October.

“Today we showed as a team we are improving,” said Patrick Vieira after the game. “One of the challenges was to accept that at times we won’t have possession, so we need to work hard to get the ball back.

“If we manage to understand that [in every game] and can be consistent we will improve.”

The draw with Manchester City followed back-to-back victories against Wolverhampton Wanderers and Stoke City – the latter which booked Palace a place in the FA Cup quarter-finals. Beating Everton on Sunday would mean a return to Wembley for the first time since the 2015/16 season.

The Toffees find themselves in a difficult position, fighting for Premier League survival for the remainder of the campaign. Having lost seven of their last 10 in all competitions, Frank Lampard’s men sit 17th in the table, level on points with Watford in the relegation zone but with three games in hand.

They have, however, beaten Hull City, Brentford and Boreham Wood already in the competition, and the chance of an FA Cup semi-final is one positive in a tough season.

Frank Lampard has already managed a side to the FA Cup final, taking Chelsea to Wembley in 2019/20 before losing to Arsenal. Both managers had supremely impressive records in the competition as players, with Lampard and Vieira winning four and five FA Cup trophies respectively.

Palace’s success against Manchester City was in no small part down to their tireless midfield trio of Conor Gallagher, Jeffrey Schlupp and Cheikhou Kouyaté.

“The three midfielders maybe need a couple more days off than everyone else!” Vieira said after the game. “They ran a lot… and didn’t give up, and this is a really good sign for us.”

The manager will hope for the same against Everton’s energetic midfield of Abdoulaye Doucouré and Donny van de Beek, supported by Richarlison dropping deeper from his position leading the line.

The Eagles will also be well prepared for Andros Townsend's return, who can add a moment of magic in attack – as demonstrated with his sensational goal against Burnley in September.

The game will be broadcast live via ITV. Tune-in to ITV from 11:45am.

The official Palace app’s match centre is the place to be for everything you need during the Everton clash. With live stats and alerts, a running match commentary feed and lineups the moment they’re released as well as an instant match report and post-match reaction from Palace TV+, there’s no need to leave the app to follow the Eagles’ efforts.