After victory at Southampton last weekend, Patrick Vieira is presented with several welcome selection dilemmas before Watford's visit on Saturday, 7th May (15:00 BST).

Palace’s victory over the Hornets in February sparked a remarkable eight-game unbeaten run that included crucial victories over Arsenal and Everton and culminated in an FA Cup semi-final at Wembley. 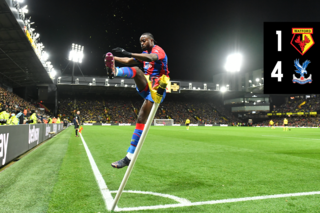 Vieira will be pleased with his side’s response after back-to-back defeats on the road in the Premier League. The Eagles put in a dominant display against Leeds United at Selhurst Park but were unable to find a way through, before late drama saw them come from behind to snatch all three points at St Mary’s.

After falling behind from a set-piece early on, Palace equalised through Eberechi Eze – his first goal since returning from injury – and then completed their comeback in the second minute of injury time as Zaha struck from distance.

“This is the character we want as a football club,” Vieira told Palace TV after the game. “We know we are capable of doing it at home.

“The only question mark was: can we do it away from home? We did it a couple of times but there was inconsistency in these kind of performances and today we answered it quite well.”

Vieira will hope that the Watford clash can be a chance to demonstrate that new-found consistency, as they look to complete the double over the Hornets in south London.

It means the return of Vieira’s predecessor Roy Hodgson, who spent four successful years at Selhurst Park to solidify the club’s place in the Premier League.

Hodgson has a battle on his hands at Vicarage Road, with the club 10 points adrift of safety and facing relegation should they suffer defeat this weekend.

Palace, on the other hand, can climb into the top half with a favourable result, sitting just three points behind ninth-placed Brighton with a game in hand.

After coming off the bench to score the winner against Southampton, there could be a return to the starting lineup for Zaha against Watford. With Mateta impressing up-front, and Michael Olise, Odsonne Edouard and Jordan Ayew jostling for positions out wide, it presents a dilemma for Vieira when picking his starting XI.

Eze, who scored for the first time since returning from injury last time out, may move back into midfield alongside Conor Gallagher and James McArthur.

With Ben Foster back in goal after missing a spell earlier in the season, Palace will have to make the most of their chances to exploit Watford’s inconsistent back four.

The danger posed by the Hornets will come in the attacking positions, where Ismaïla Sarr and Emmanuel Dennis continue to demonstrate their undeniable potential, despite Watford’s league struggles.

The official Palace app’s match centre is the place to be for everything you need during the Watford clash. With live stats and alerts, a running match commentary feed and lineups the moment they’re released as well as an instant match report and post-match reaction from Palace TV+, there’s no need to leave the app to follow the Eagles’ efforts.